Why Are so Many Runs Scored in the Bottom of the First Inning?

After starting to look at some inning-by-inning data from my baseball win expectancy finder for another project, I stumbled across something weird that I can’t explain. Here’s a graph of expected runs scored per inning:

Check out how high the bottom of the first inning is. On average, 0.6 runs are scored then compared to 0.5 runs in the top of the first. That’s a huge difference! Let’s look closer: 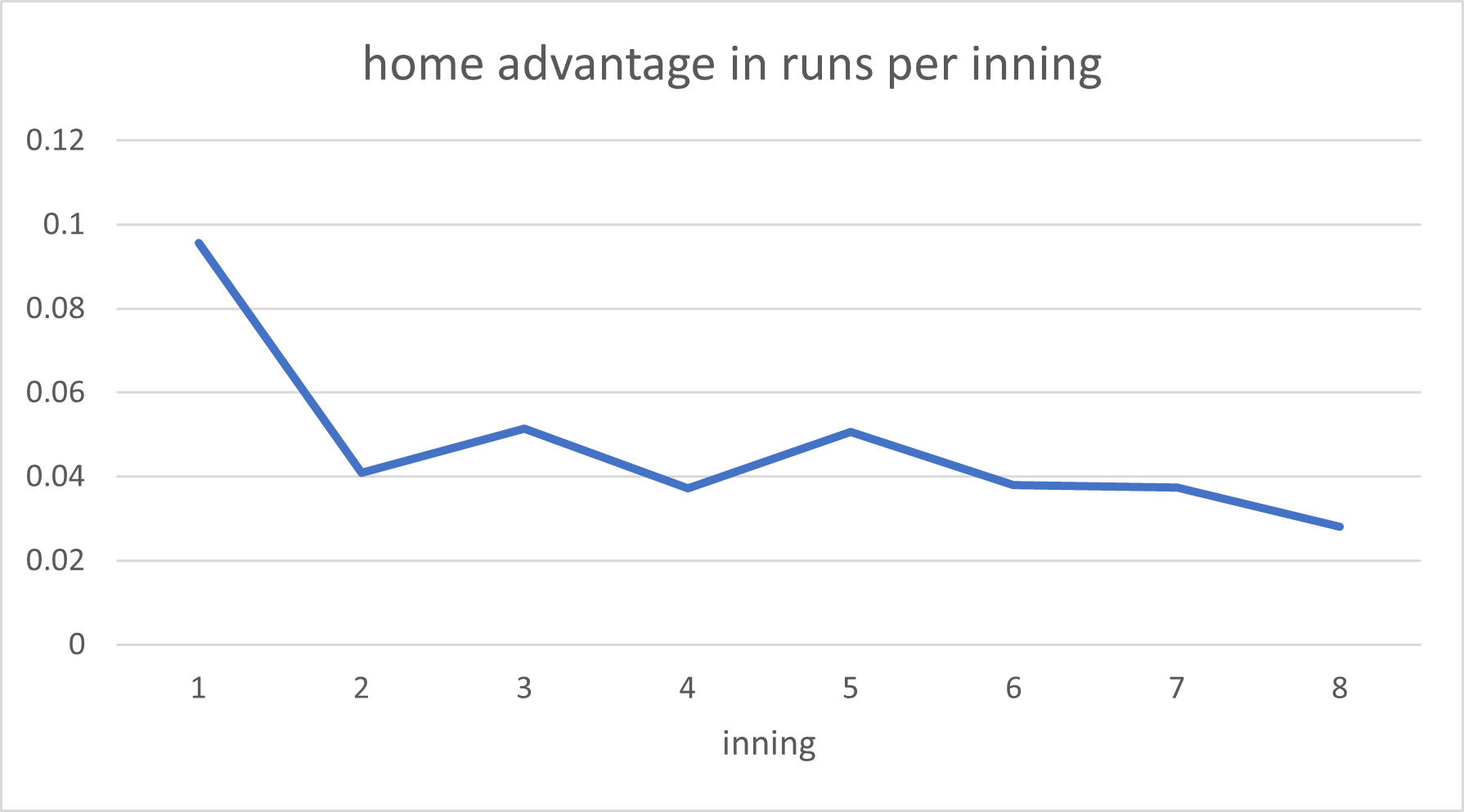 Holy outlier, Batman! So what’s going on? Here are some ideas:

In conclusion, I don’t know! But a few people have suggested that the visiting pitcher has to wait a while between warming up and pitching in the bottom of the first. Tom Tango made a similar observation a while ago. I dive into this more in the follow-up post here.

This piece originally ran on my blog.

It is what Tango said.

Pitching on the road is intimidating. And that sense of unease is always worst in the first inning… Also, starting pitchers on the road are more likely to be travel weary while the opposing starting pitcher slept in his own bed. You’re naturally going to feel a little unease in a hostile environment and you probably didn’t get the best night sleep in the world and you’re facing their very best hitters… yeah, it’s no surprise there’s a pronounced home advantage in the 1st inning.

This is very interesting! If it is the warm-up delay factor, then this implies there is a decent amount to be gained for road teams by changing up the timing of starters warming up.

what about the condition of the mound? I assume every mound is a little different (but still within the ruled standards) and getting accustomed to it takes a little time. Maybe getting a good groove worn in for your landing foot or something? The home pitcher would naturally be accustomed to it or maybe even have the grounds crew tailor it to their requirements.

This is an interesting theory, thanks!

I would think that there are two important factors.

1. Top of the lineup starts off the game…that should explain some of this and you have mentioned this.
2. A pitcher “doesn’t have it” that game. If a pitcher doesn’t have it, this will typically show up right away (in the first inning). Perhaps this is exascerbated by being on the road (different mount in bullpen during warmups and in the game, different routine, etc.).

This was discussed many years ago on Tangos blog. Originally I thought that the home team had an advantage by seeing how the umpire was calling the game against the visiting team in the top of the first. But the real answer is much simpler. As most of you have stated each team scores more in the first than in other innings because it is the only inning where their three best batters are guaranteed to bat. The home team scores more because their three best batters have been selected by draft, trade, or purchase because they are more likely to hit well in their home park where they will play most of their games. They are all playing up to their predicted skill level; the home hitters, the visiting hitters,AND the home and visiting starting pitcher. Not every game of course, but on average in the aggregate. The key to understanding this is the two flat lines for the scoring from the third through the sixth inning. These innings have almost no bias on who leads off the inning. The distance between the two lines is the home team advantage from the selection bias.

But even given the home field advantage and the top of the lineup effect, it still seems like home teams are scoring more in the first inning than one would expect!