What Makes a Good Four-Seamer Good?

Cross-Tabulating To Determine the Impact of Each Element

A cross-tabulation was performed for four-seamers thrown in MLB from 2017-2021, with velocity ticked to 4 km/h, vertical movement ticked to 7.5 cm, release height ticked to 10 cm, and plate height ticked to 15 cm. Each element was tabulated and color-scaled with the MLB average as the middle value in white, good values for pitchers in red, and bad values in blue. The indicators are Whiff%, xwOBAcon, and xPV/100 (expected Pitch Value per 100 pitches, which I wrote about here). 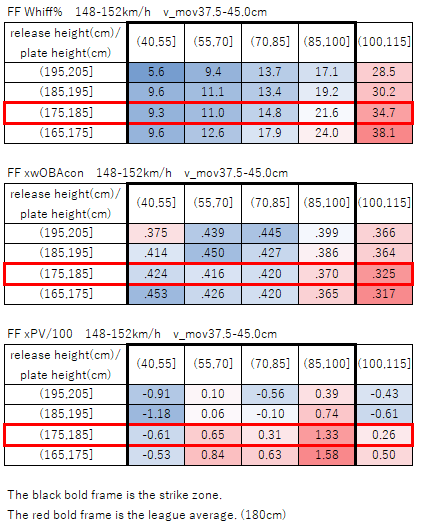 The following can be found from the aggregate results.

I wanted to see how much difference there is in the index if I fix the ball speed at 148-152km/h and only change the amount of vertical movement (click to enlarge).

Whiff% is higher in the larger group (45.0-52.5 cm) than the average (37.5-45.0 cm) for vertical change. Even if the pitch is thrown from a high release position, it is versatile, and as long as it is not thrown too low, it can be expected to have a high deterrent effect on scoring.

On the other hand, the group that sinks below average has a low xwOBAcon, but a low Whiff%. If you want to limit runs with this group of four-seamers, you need to compensate for their low rise by throwing them high from a lower-than-average release position.

How much difference would there be in the index if the vertical movement was fixed at 37.5-45.0 cm and only the velocity was changed (click to enlarge)?

The slower-than-average group (144-148km/h) basically has a lower Whiff%. It requires precise control from a low release position to the top of the zone. 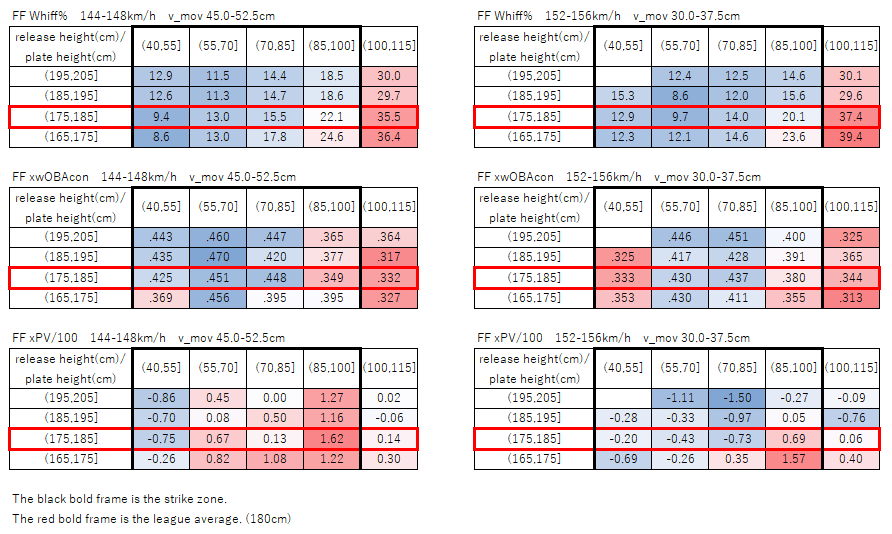 You may suspect something when you hear this. A player who can throw a fast fastball also has a fast breaking ball. Fast breaking balls have high Whiff%. However, with the exception of the curve, the velocity of the breaking ball is basically uncorrelated with Whiff% (click images to enlarge).

To increase Whiff% and value in the four seam fastball:

The above seems to be most crucial. It is important to have a low release position and pitching course, because even a sinking four-seam or slow straight pitch can increase the value.

I used Statcast data from Baseball Savant in this analysis, which is a translation of the original here.

@nam – so who are the best SP at meeting the Summary criteria? 🙂

Five players have a great Whiff%.
On the other hand, Buehler and Gray’s Whiff% is not so high.
There may be other factors still at play.

I am not sure I understand how the analysis all occurred (even though the explanation seems straightforward), but as a fairly big dum-dum I still enjoyed the article and pondering the conclusions. Thanks!