What Happened to Benny?

It’s safe to say the Boston Red Sox have been underwhelming this season. As a Red Sox fan who follows the local media, it’s overwhelming to hear just how underwhelming they have been. If you have followed Boston sports media during this baseball season, you would think the team is tied with the Detroit Tigers for the worst record in the league. In fairness to Boston sports pundits, the team has a wealth of talent that has played below their usual standard for most of the season. This has the local radio shows calling to trade the beloved Mookie Betts, suddenly turning on ace Chris Sale, and openly criticizing manager Alex Cora, not even a year after he was hailed the Bill Belichick of baseball.

Oh, how quickly the tides turn in the city of Boston.

The team has certainly regressed from their magical 2018 season. That’s just the way baseball works sometimes. But the true mystery to me has been Andrew Benintendi. The Red Sox left fielder was coming off a fantastic 2018 season that saw him post a WAR of 4.3 and a wRC+ of 122. These numbers have dipped to a 2.6 and 112, respectively, through 115 games. No, it isn’t the most dramatic decline in the history of baseball, but Benintendi was a key part of Boston’s success in 2018. Of all the players to take a step back this season, I wasn’t necessarily expecting it to come from him.

Traditionally, the critique of Benintendi has been that he is an elite hitter against right-handed pitching and less than stellar against left-handeders. This trend has come to a screeching halt in 2019. 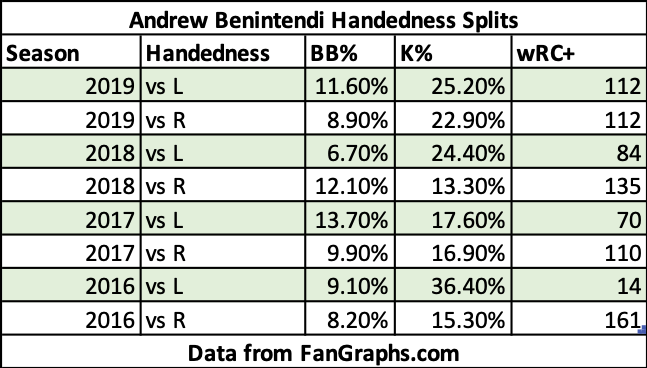 To further analyze Benintendi’s batting splits, it’s important to first understand his pitch values against specific pitch types. From the table above, there are three things that immediately jump off the page for me. First is Benintendi’s unbelievable season against fastballs he put on display in 2018. Second is his unbelievable performance he is putting up against curveballs this season. Lastly, however, and perhaps the most important piece, is his sudden regression in pVAL against changeups in 2019.

To break this down another layer, we must observe how Benintendi has performed against the pitches right- and left-handed pitchers have thrown to him. Using data from Brooksbaseball.net, we can do exactly that.

Before 2019, Benintendi had held his own against most pitch types. He’s had his fair share of struggles against left-handed breaking balls and he had been able to keep his batting statistics against right-handed changeups at respectable levels. There’s nothing eminently concerning about these numbers. The only obvious thing here is the classic analysis of Benintendi, which is he performs better against right-handed pitching. Flip the page to 2019 and we get a different story.

Suddenly if we were to only throw curveballs to Benintendi, he would become Ted Williams. Benintendi’s improvement against left-handed breaking balls this season appears to explain how his wRC+ against left-handed pitchers has improved so dramatically. His numbers against right-handed fastballs have been mostly consistent with slight decreases in power. But the big red flag here is the ominous decline against right-handed changeups. This is a classic case of the changeup neutralizing the opposite-handed hitter, and it has Benintendi in knots this season. The two heat maps below, provided by FanGraphs, illustrate just how clear Benintendi’s struggles against right-handed changeups has been this season. 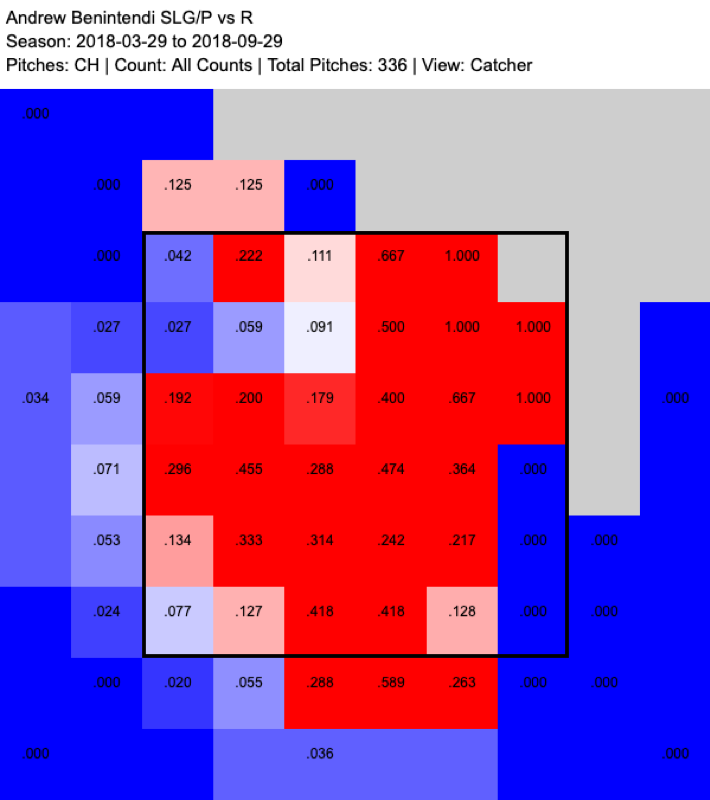 In 2018, it can be seen that Benintendi was able to dominate the strike zone when it came to right-handed changeups. There are few spots in this heat map that show a sign of weakness against the pitch. This was important for Benintendi to establish during the 2018 season, as it helped him become one of the better hitters in the Red Sox lineup. 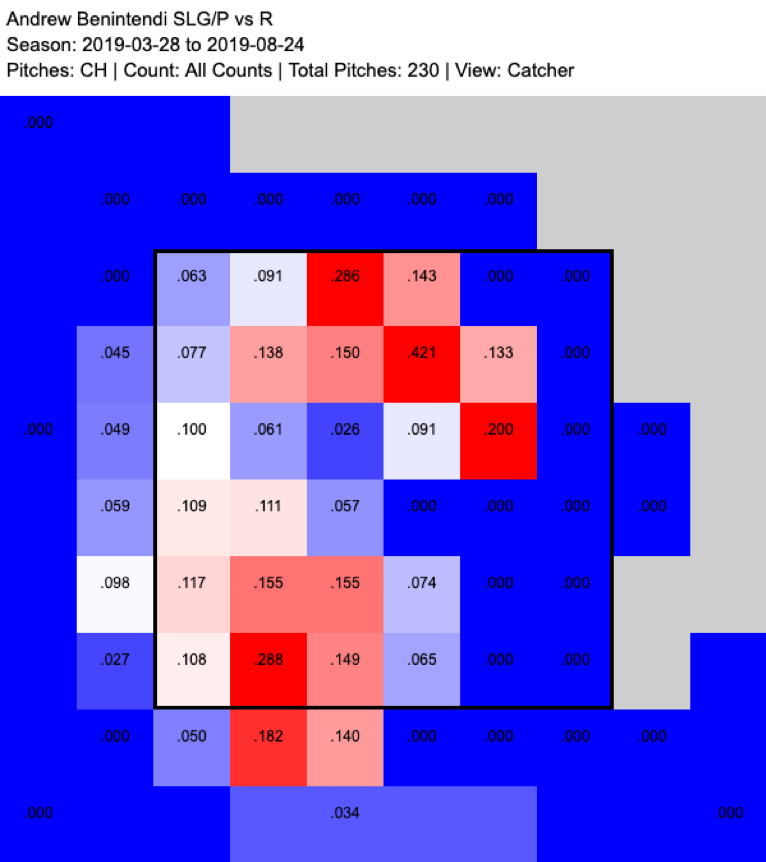 The results are night and day when comparing the 2018 and 2019 heat maps. As opposed to the 2018 heat map, there are few instances in the 2019 diagram that would suggest any strength against right-handed changeups. Benintendi has seemingly forgotten how to dominate right-handed pitchers the way he was once capable of. This is a surprising development for the young Red Sox outfielder. Hopefully, Benintendi can stop playing cat and mouse with right-handers and return to his once-dominant self sooner rather than later.

As a Red Sox fan, I was ready for regressions from most of the team’s young players this year. With that being said, it’s still encouraging to see how incredible Rafael Devers and Xander Bogaerts have been at the dish all season long. Yet of all regressions that could have occurred this season, Andrew Benintendi crushing left-handed breaking balls and becoming neutralized by right-handed changeups is not what I expected. But this is a funny game, and as I stated earlier, that’s just the way baseball works sometimes.

Admin
Member
Dylan Higgins
You can flag a comment by clicking its flag icon. Website admin will know that you reported it. Admins may or may not choose to remove the comment or block the author. And please don't worry, your report will be anonymous.