Jack Flaherty spent the first half of the 2019 season disappointing most Cardinals fans who expected a continuation of his breakout 2018 campaign. Flaherty, who posted a 4.64 ERA with a 26.4% strikeout rate and a 1.86 HR/9, had been quite disappointing up to that point for a ST. Louis squad that was relying on his ability to become their ace. The Cardinals were 44-44 at the time and two games back of the Cubs for the NL Central lead.

On July 16th, Flaherty took the mound against a Pirates team that would fall apart in the second half. Flaherty dominated, giving up just three hits and one run over seven innings of work while striking out eight. A line like this would soon become the norm for Flaherty, who has been absolutely on fire since the All-Star break. His efforts have helped propel the Cardinals to the top of the NL Central in the middle of a playoff race.

How did Flaherty turn it around? The biggest cause for success is his slider, which statistically has been one of the best pitches in baseball since the break. Additionally, Flaherty started locating his fastball better and got a nice little bump in velocity. Flaherty’s sharpened tools have allowed him to significantly increase his O-Swing % and decrease his Z-Contact %, meaning that he’s getting hitters to chase more out of the zone but also miss more in the zone.

Flaherty’s slider has always been his go-to pitch, but he has featured it significantly more in the second half. Flaherty used his slider 25% of the time in the first half. It was still his featured offspeed offering, but the curveball was also utilized along with increased use of the fastball. In the first half of the season, the slider was exclusively down and away to right-handed batters (and down and in for a left-handed hitter). In the second half, Flaherty has been able to employ the slider on both sides of the plate as well as bury the slider down and away. 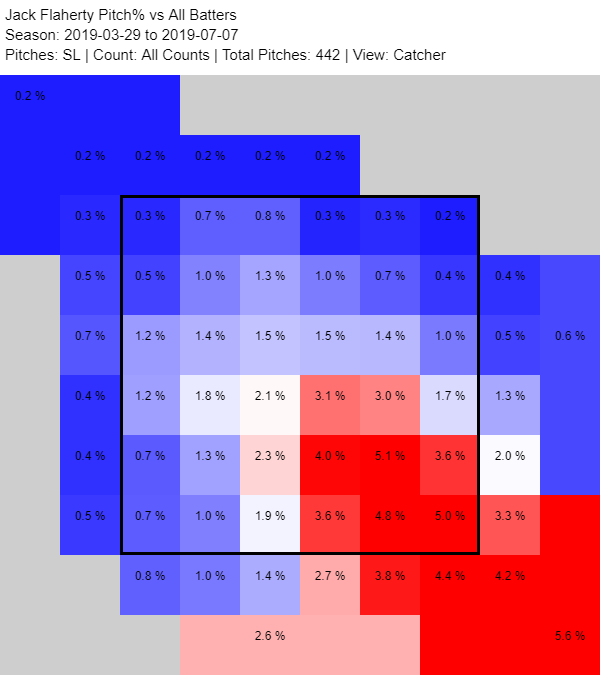 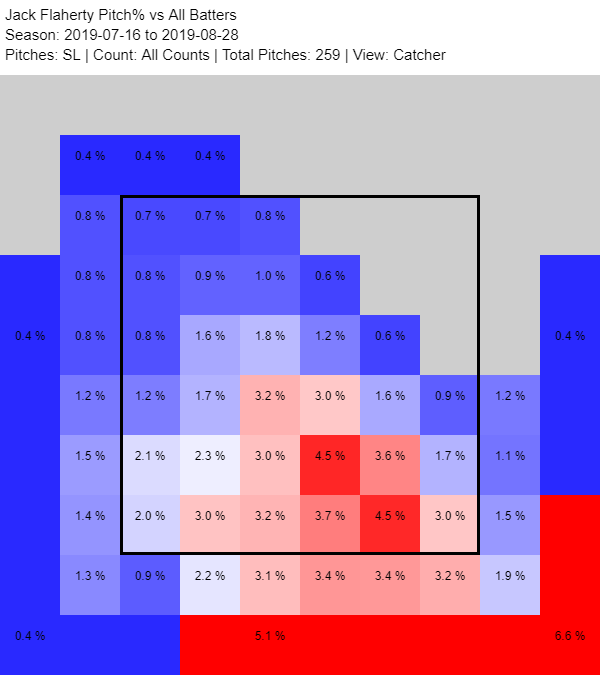 As the first heatmap shows, Flaherty barely worked on the inner third of the plate to right-handed batters and stayed on a linear path from the middle of the zone. Additionally, he also hung a portion of the sliders in the upper third of the zone, leading to hard contact. In the second heatmap, Flaherty has worked his slider more in towards right-handed hitters and employed much more of the strike zone than he had before. Not only was Flaherty working on both corners, but this allowed for him to bury the slider more often as well. The two largest hot spots are in the dirt at 5.1% and 6.6%, which were at 2.6% and 5.6% in the first half. The change in location of the slider has led to the rejuvenation of the slider’s success, which has since been the best pitch in baseball. 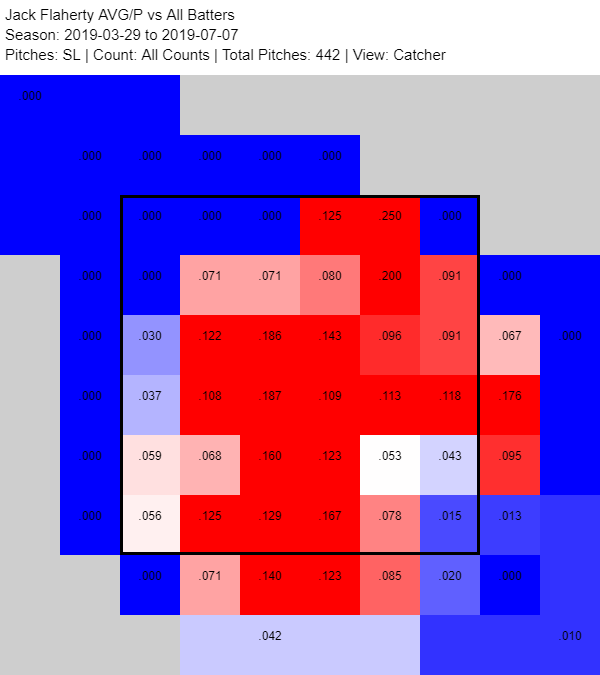 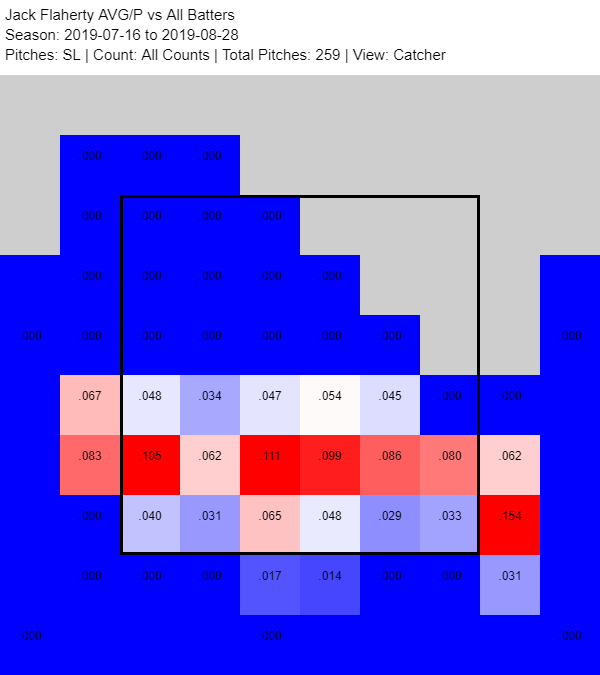 These two heatmaps show the resulting average on sliders, and the difference is night and day. In the second half, there are only three total spots that have a resulting average above .100. The use of both sides of the plate has kept hitters much more off-balance, and the slider has become nearly unhittable.

While the slider is the main cause of Flaherty’s dominance, his fastball has also seen improvement since the All-Star break. Flaherty has seen a slight velocity bump on the fastball and has been throwing harder in most of his starts in the second half. He has topped out in his start on August 13th at Kansas City, where he averaged 94.8 mph in seven scoreless innings with three hits, one walk, and seven strikeouts. 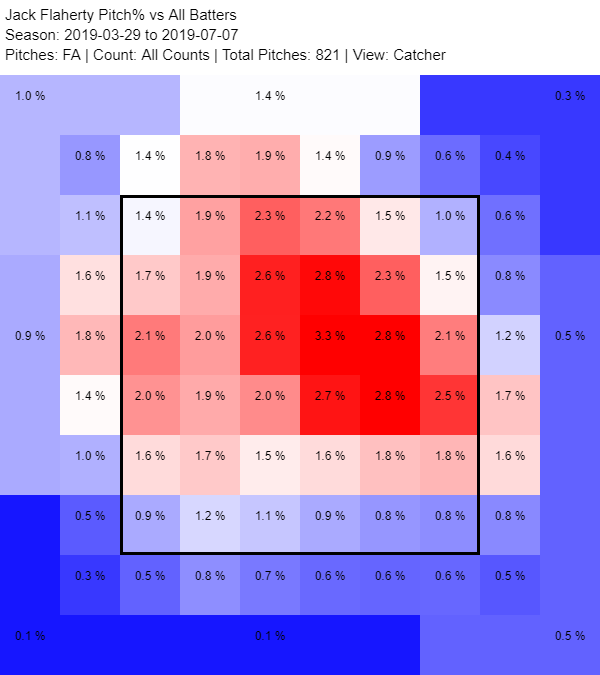 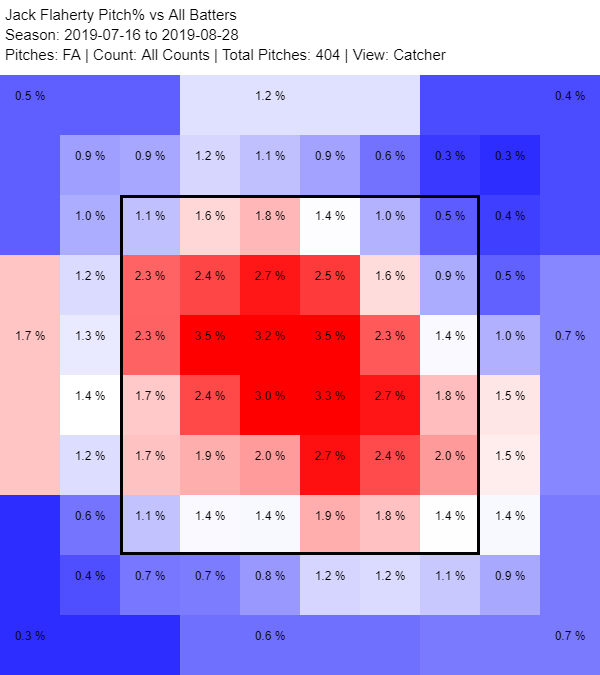 As the heatmaps show, Flaherty started throwing the fastball more inside and almost doubled the frequency of the way-inside fastball (from 0.9% to 1.7%). Furthermore, he has relied upon high fastballs less and has focused more on staying within the strike zone.

An important step in the development of a big league pitcher is being able to make changes when stuff is not working, and Flaherty is exemplifying that. He is proving that 2018 is not the outlier, but instead the first half of 2019 was. This success due to the changes in his approach with his fastball and slider show the ace material that Flaherty is made of. Flaherty posted a 0.71 ERA in five August outings on his way to an NL Pitcher of the Month award. If Flaherty can continue his remarkable dominance down the stretch, he could even have an outside chance at a Cy Young award.

Walks, Strikeouts, and the Playoff Race
What Happened to Benny?
newest oldest most voted

Member
therealryan1
You can flag a comment by clicking its flag icon. Website admin will know that you reported it. Admins may or may not choose to remove the comment or block the author. And please don't worry, your report will be anonymous.

are there heat maps here or does my work computer just block those out? If the author wouldn’t mind linking them or disclosing where he found them (I assume this is statcast data) I would appreciate it!

Author
Nate Schwartz
You can flag a comment by clicking its flag icon. Website admin will know that you reported it. Admins may or may not choose to remove the comment or block the author. And please don't worry, your report will be anonymous.

Member
therealryan1
You can flag a comment by clicking its flag icon. Website admin will know that you reported it. Admins may or may not choose to remove the comment or block the author. And please don't worry, your report will be anonymous.

You my friend are an MVP.