Last month, I wrote about the two leagues, noting that

Let’s start with the second point. At the time of the post, through games of September 5, the standard deviation of winning percentages among American League clubs was the lowest it has been in the 30-team era. Projected onto a 162-game season, the standard deviation of wins for American League teams was 7.8, barely eking out 2007’s 7.9 as the most egalitarian distribution of wins since 1998.

Since September 5, a .500 record has become a black hole, exerting irresistible gravity throughout the American League galaxy: 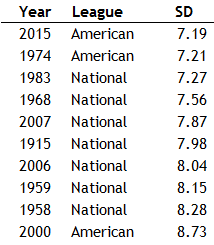 The 2015 American League is the most egalitarian, populist, tax the rich/feed the poor, Kumbaya-singing league in baseball history. As I suggested in September, it’s the Sweden of leagues.

Now, as to the other point, the American League’s superiority over the National League despite its group hug ethic, here’s a chart. 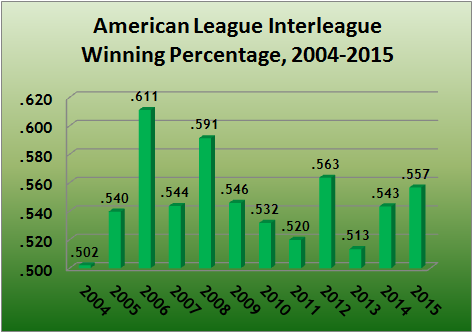 The Pittsburgh Pirates and Two Missed Opportunities
Kershaw vs. Arrieta: Battle for the NL Cy Young

And yet, the home page of your blog seems very NL oriented. Too bad.

Heh. Yeah, I mostly write about the Pirates there. Thanks for stopping by here. I heard so much this summer about how lousy the AL is that I looked into it.