How Rare Is a Chris Davis Comeback?

The Orioles are having a rough go of it. After being tied with the Yankees for first place in the AL East on July 2nd with a 42-37 record, the Orioles have gone 26-36 since and, as of September 13, are just a half-game above the last place Red Sox.

However, the standings don’t appear to be having an effect on Chris Davis, the slugging Orioles first baseman who is in the midst of a hot streak that includes 6 HR and a .493 OBP in his last 15 games. Davis’ recent performance continues his resurgence, bringing his average up to .261 and his home run total to 41 on September 13. Davis struggled mightily last year before a suspension for unapproved Adderall use cut short his season, finishing with 26 HR and a miserable .196 BA. A power surge couldn’t come at a better time for Davis, who is looking to make more money in the free-agent market this offseason.

Just how rare is Davis’ comeback, however? Davis was an established major-league player before this season, having played 723 games while averaging 2.0 WAR per 162 Games. His Oriole-record 53 homers in 2013 (which included 7.1 WAR) made him a star while his forgettable 0.8 WAR in 2014 made him just another one-hit wonder.

Examining position players with at least a full season’s worth of games played before their comeback season, we’ll set the following criteria for a comeback:

These baseline cutoffs are very similar to Chris Davis’ 2015/2014 experiences. Noting these, we find 70 comeback seasons since the beginning of the expansion era (1961) that fit the criteria. 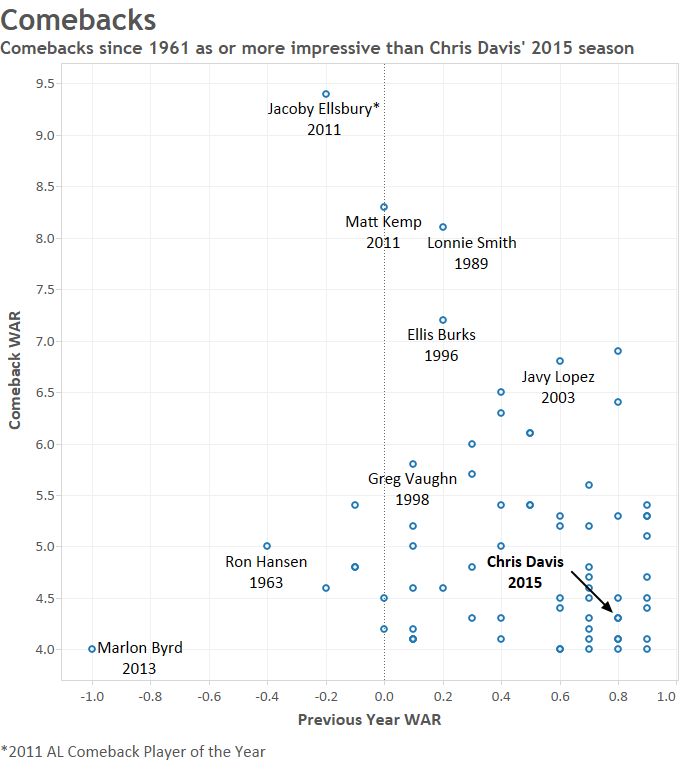 Davis’ 2015 is bunched around Coco Crisp’s 2007 with the Red Sox and Victor Martinez’ 2014 with the Tigers. These players all saw their WAR increase by about 4.3 from their previous years.

The most impressive comeback in terms of WAR improvement was Jacoby Ellsbury’s 2011 with the Red Sox, when he put together a 9.4 WAR season after an injury-shortened -0.2 WAR season.

Overall, a comeback like Davis’ isn’t all that rare. In fact, comebacks as or more impressive happen about five times every four years. That shouldn’t deter Davis, however, whose performance is one of the bright spots on a struggling Orioles team.

So from a fantasy point of view, and this is strictly speaking about the players you highlighted (Ellsbury, Kemp, Smith, Burks, Lopez, Vaughn, Hansen, Byrd, Crisp), the year after the comeback, the production tailed off for a lot of them again.

Obviously each case is so different, but I would expect Davis’ numbers to erode a little next year. Nothing wrong with a 2.4 WAR/.360 wOBA player…