The road from Opening Day to the All-Star break produced an abundance of entertainment and storylines. Max Scherzer was unhittable, Lance Lynn led AL pitchers in fWAR, and Christian Yelich and Cody Bellinger found themselves in an MVP race. However, no headline drummed up as much controversy as the increase in home runs resulting from juiced baseballs. To provide some context, the home run to fly ball ratio has risen 2.4% since last season. Additionally, Buster Olney provides us with a different but still shocking angle:

Even if you deny the introduction of juiced baseballs, the increase in home runs is undeniable.

Presumably, if league-wide home run rates inflate, individuals should experience a similar increase. Of course, there is luck and small sample sizes involved, but increases should be relatively constant across the board. However, there has been one extreme outlier who will be the main focus of this work.

Justin Verlander was the ace of a world champion team, has won a Cy Young Award and an MVP Award, and has posted 67.8 career fWAR. Recently, in an interview with ESPN, Verlander expressed his frustration and accused MLB of juicing the baseballs. “I find it really hard to believe that Major League Baseball owns Rawlings and just coincidentally the balls become juiced,” he said. Surprisingly, very few, if any, pitchers have been more affected by the uptick in home runs as much as Verlander, who gave up 26 in the first half. END_OF_DOCUMENT_TOKEN_TO_BE_REPLACED

Did you know that when Derek Dietrich is not occupied with his beekeeping business, he moonlights as a baseball player?

DIETRICH TO THE RESCUE! pic.twitter.com/eYSqUGxFcD

In fact, he has seen remarkable improvements in his side gig this year. After being released by the Marlins in the offseason, Dietrich accepted a minor league offer with the Reds. A variety of injuries and under-performers opened the door for Dietrich, who has made the most of his opportunity. Through 56 games this season, Dietrich has already hit 17 home runs, surpassing his previous career high of 16, set last year. On the same note, Dietrich currently has a 169 wRC+ which, if he was qualified, would tie for 9th in baseball. In many cases where a player experiences such a sudden and extreme breakout, it is common for him to experience luck with batted balls. Remarkably, Dietrich has excelled this season despite a .220 average on balls in play.

This year, Dietrich, like many before him, has made a conscious effort to hit the ball in the air. According to Baseball Savant, Dietrich has increased his average launch angle from 15.7 to 20.0. Furthermore, 17.2% of Dietrich’s batted balls have been hit “on the barrel,” which ranks 14th in MLB and three spots ahead of Christian Yelich. Paired with a lessening tendency to offer at pitches outside of the strike zone, Dietrich’s new swing has prompted his breakout despite minimal luck on balls that did not leave the park. END_OF_DOCUMENT_TOKEN_TO_BE_REPLACED

Trevor Bauer is a walking headline. Whether he is turning himself into some kind of pitching robot in a lab or calling out his peers for using a foreign substance to enhance their spin rate, Bauer tends to attract plenty of attention away from the field. However, Bauer’s most noteworthy accomplishments lately have occurred on the field. Last season, Bauer had more fWAR than Blake Snell, winner of the American League Cy Young Award, despite pitching fewer innings and landing on the injured list for over a month. Bauer, unsatisfied with last year’s performance, developed his previously sparingly used changeup in the offseason to complement his already ample repertoire. Taking a look at Bauer’s pitch usage this year shows a clear difference in the way he attacks righties as opposed to lefties.

Here is his pitch mix vs. righties this season: And his usage vs. lefties: 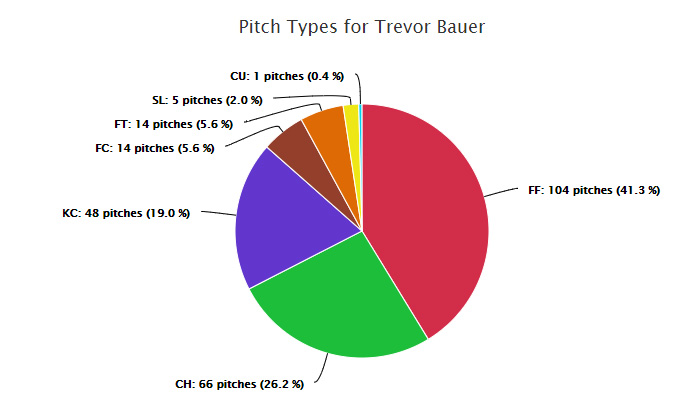 Of course, the small sample size caveat applies at this point of the season, but Bauer has been featuring a changeup against lefties at a much higher rate than last season. 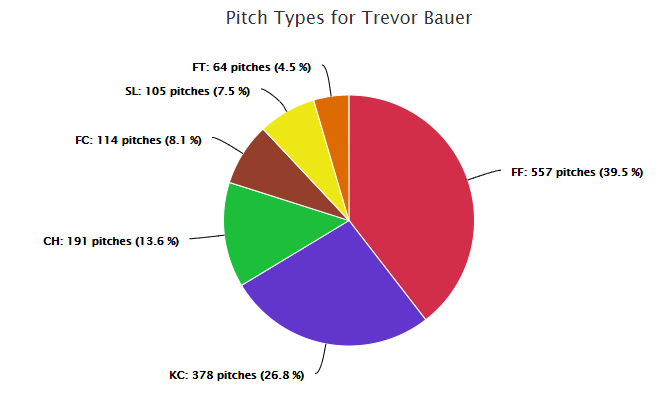 Bauer now throws his changeup twice as often as last season against lefties, and so far the results have been good. The pitch has produced a 75% ground-ball rate when put in play, and opposing batters have only recorded a single hit off of it.

While Bauer has certainly adjusted his method of attacking lefties, an early breakdown of how he has attacked righties is even more intriguing. Here’s his 2018 pitch usage vs. right-handed batters: 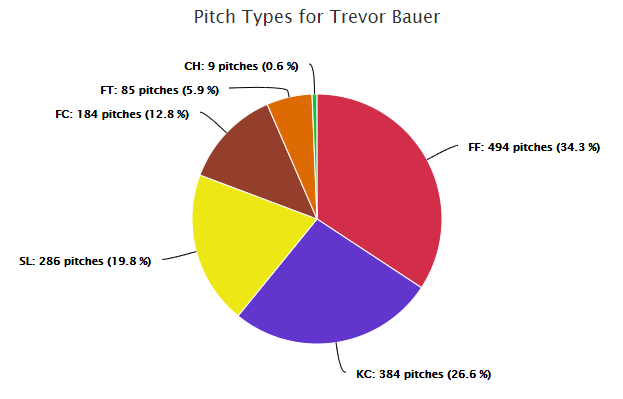 Comparing Bauer’s 2018 and 2019 pitch breakdown against righties reveals a few monumental adjustments. Bauer has evidently abandoned his signature knuckle curve and replaced it with a sharp increase in the usage of a cutter. In my opinion, these adjustments were made in the name of tunneling. Sliders and cutters both have primarily sideways movement, which makes it more difficult for the batter to differentiate between them. Curveballs and changeups both tend to break downwards, causing the same confusion for batters. By pairing these pitches against righties and lefties respectively, Bauer decreases the chance that a batter can read the pitch correctly out of his hand.

Up until this point, Bauer has been sharp, using his new changeup and dedication to tunneling to strike out a third of the batters he has faced and firing seven no-hit innings on April 4th against the Blue Jays. Through five starts, Bauer has struck out 32.6% of batters and at least seven in each outing. As Bauer continues to tweak his approach, perhaps he could benefit even further by lowering his fastball usage, mimicking the strategy of many pitchers before him, in order to combat hitters who sit on the pitch ready to unleash uppercut swings. By lowering his fastball usage and further utilizing his tunneling ability, Bauer will be even more unpredictable to hitters.

Time will tell if Bauer’s new strategy will be successful all year, but based on his dedication to both analytics and his craft, he seems to be on pace for another Cy Young caliber season.