The road from Opening Day to the All-Star break produced an abundance of entertainment and storylines. Max Scherzer was unhittable, Lance Lynn led AL pitchers in fWAR, and Christian Yelich and Cody Bellinger found themselves in an MVP race. However, no headline drummed up as much controversy as the increase in home runs resulting from juiced baseballs. To provide some context, the home run to fly ball ratio has risen 2.4% since last season. Additionally, Buster Olney provides us with a different but still shocking angle:

Even if you deny the introduction of juiced baseballs, the increase in home runs is undeniable.

Presumably, if league-wide home run rates inflate, individuals should experience a similar increase. Of course, there is luck and small sample sizes involved, but increases should be relatively constant across the board. However, there has been one extreme outlier who will be the main focus of this work.

Justin Verlander was the ace of a world champion team, has won a Cy Young Award and an MVP Award, and has posted 67.8 career fWAR. Recently, in an interview with ESPN, Verlander expressed his frustration and accused MLB of juicing the baseballs. “I find it really hard to believe that Major League Baseball owns Rawlings and just coincidentally the balls become juiced,” he said. Surprisingly, very few, if any, pitchers have been more affected by the uptick in home runs as much as Verlander, who gave up 26 in the first half.

This chart compares Verlander’s HR/FB rate to that of the rest of baseball over the past five seasons: 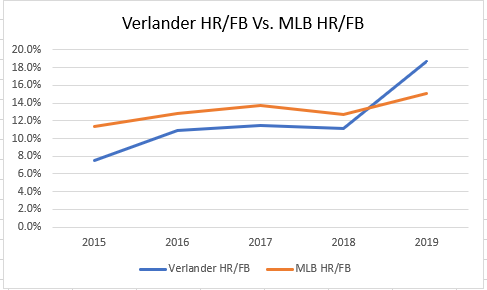 Until this year, Verlander has consistently been able to suppress home runs relative to the rest of the league. This year he owns the eighth-highest rate amongst qualified pitchers. When a pitcher of Verlander’s pedigree becomes a poster boy for an increase in home runs, a thorough investigation is warranted.

First let’s start by eliminating some possible suspects. Verlander’s fly ball rate has decreased nearly 5% since last season, and his velocity on his entire arsenal is comparable to last year. It certainly seems like Verlander has not experienced any serious decline in ability, so what could be causing his struggles? I believe there are two possibilities, which are somewhat related: falling behind in counts, and fastball location.

Falling Behind in Counts

In 2018, Verlander was an extreme strike thrower. He had a 4.4% walk rate, which was nearly half of the league-wide rate. He also had a first-pitch-strike rate of 68.9%. Both rates were fourth-best amongst qualified pitchers. This season, Verlander is still throwing plenty of strikes, but his first-pitch-strike rate was down to 63.8% in the first half, partly due to Verlander throwing first-pitch fastballs 13% less often than he did last year. Of course, falling behind in counts can allow hitters to sit on a fastball in a favorable location, but that is hardly enough to explain all of the home runs.

In the ESPN piece mentioned earlier, Verlander made another noteworthy comment:

“No matter who’s the batter, I feel like I’m constantly walking a tightrope, because any batter can go opposite field. Any batter can leave with any pitch that’s anywhere in the zone. You can’t miss barrels anymore. You have to miss bats. There’s been multiple times this year where five years ago I’d probably just throw a fastball away. I can’t do that. Because you’re the 8-, 9-hole hitter and you still can hit an opposite-field homer.”

Verlander notes that he must take additional caution with regard to location. Easier said than done. Of the 26 home runs he surrendered in the first half, 16 came off his four-seamer. In 2018, Verlander had very precise fastball location, as this chart from Baseball Savant shows: 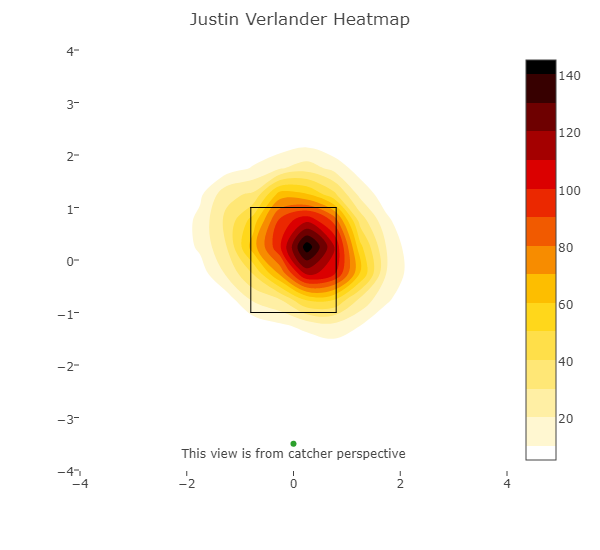 Evidently, Verlander was firing lasers with his fastball and not leaving much out over the plate. However, Verlander’s 2019 heatmap paints a different picture: 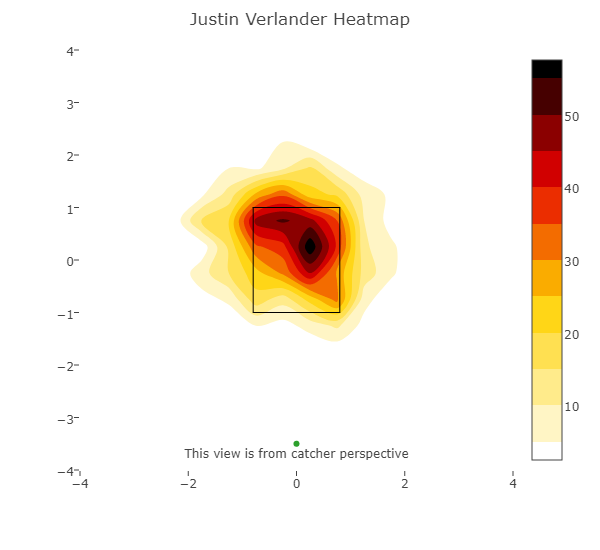 This year, Verlander has had some fastballs leak over the plate and thus paid the price. This video shows Verlander missing his spot and serving up a home run to the light-hitting Ehire Adrianza.

Notably, J.D. Martinez, in the same ESPN piece, stated that he is seeing more mistakes over the plate this season because guys are focusing on stuff at the cost of command. In tandem with the juiced baseballs, that is a perfect storm for a spike in home runs.

In conclusion, Verlander’s frustration is understandable. After dominating hitters for years, he is shocked at the rate at which balls are flying out of the park. While he has certainly had some bad luck, it is worth noting that his command has fallen from its otherworldly pedestal. That being said, Verlander will quickly forgive the baseballs if he can keep the ball in the yard in October as the Astros pursue their second title in three years.

Member
DDD
You can flag a comment by clicking its flag icon. Website admin will know that you reported it. Admins may or may not choose to remove the comment or block the author. And please don't worry, your report will be anonymous.

Beyond the “stuff verses command” theory, there could be another explanation. The perfectly centered pill, smoother binding and lower seams could be limiting pitchers’ ability to grip the ball effectively in order to make it do what they want it to do (move). Analogy – maybe it’s having a Coors Field effect (thinner air = less drag, less lateral and horizontal movement).