As I noted a few weeks ago, batters who were at least semi-regulars in both 2014 and 2015 were less effective in 2015 than in 2014, as measured by wRC+. That seemed directionally unsurprising — after all, players are subject to aging and regression every year — though the magnitude (an average decline of over five wRC+ points, or over four weighted by plate appearances) was a little higher than I’d expected. Was that decline, I wondered, unusual?

To answer, I calculated the change in wRC+ from one season to the next for players with at least 350 plate appearances in each season. I looked at every year from 1969 (four-team expansion, beginning of divisional play) to the present. (Fine print: I didn’t prorate my results for strike-shortened seasons, and I combined both leagues, with their different DH rules for most of the seasons, in the study. We’re looking at over 10,000 player-seasons, so small variations like the 1994 season and the four years in which the AL didn’t have a DH don’t amount to a lot.) Here are the results, with the second year of the pair of the x axis: 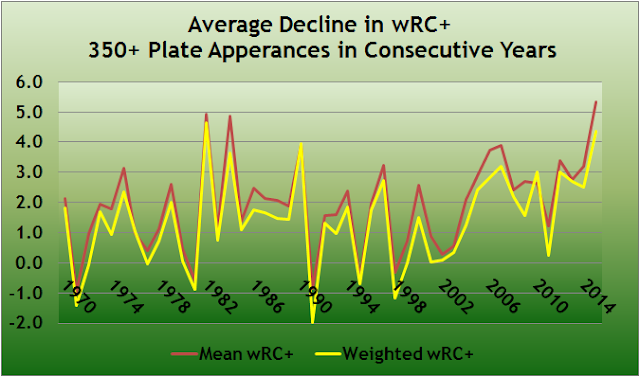 This graph should elicit two responses: (1) it looks as if year-on-year performance is declining, and (2) that is one noisy graph. 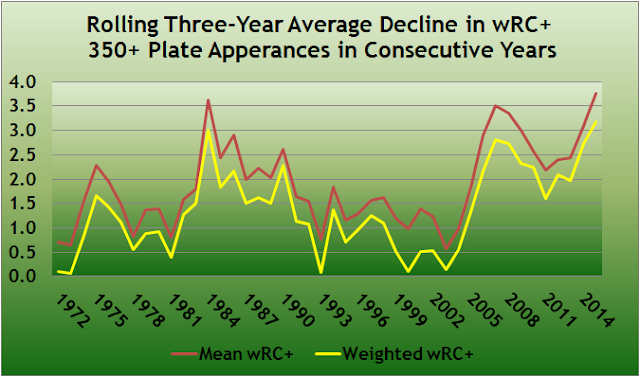 That’s less noisy, but it doesn’t change the conclusion: the year-over-year decline in offensive performance is the steepest it’s been in the nearly 50 years since divisional play began. I’ll use rolling average graphs for the remainder of this article.

The obvious question is: Why? What has changed that’s caused players to be nearly four points worse in terms of wRC+ in recent years when the long-term average decline is less than two, and hovered in a range of 0-2 in most years?

The first possibility that came to mind: Is it an age thing? Are players exhibiting different characteristics based on their year of birth? I divided the batters in my sample into four categories: Young (younger than 25 in the first season of the pair), Prime (25-29), Late Prime (30-34), and Old (35 or older). Here’s the decline in wRC+ for Young players. I used five-year moving averages, since limited sample sizes made the three-year moving averages pretty noisy. 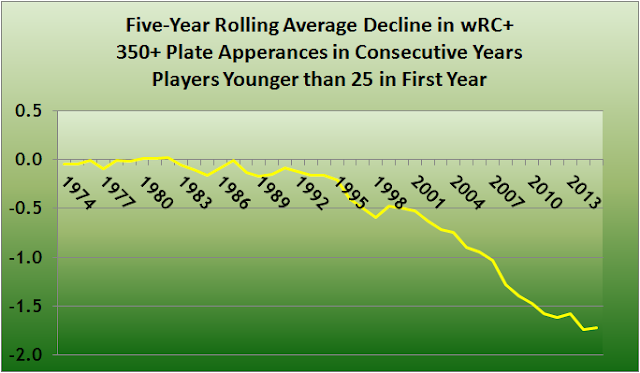 Young players have been getting better, not worse, in consecutive years. That makes intuitive sense: we’d expect batters to improve a bit every year up to their peak in their late 20s. So youngsters aren’t the reason batters appear to be falling off more, year over year.

How about Prime years: 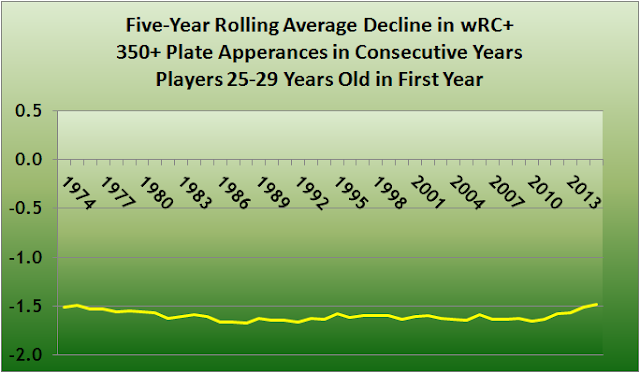 That’s the same scale as the last graph. This is a classic “You can go about your business, move along” graph. There’s been no notable change here. Batters entering their prime years have improved by about 1.5 wRC+ points in consecutive years, year-in, year-out. 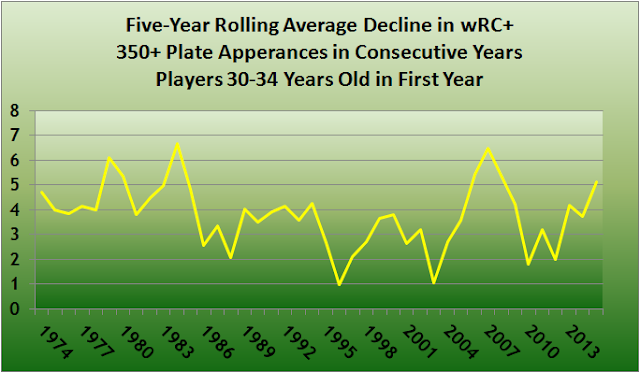 But we haven’t explained the problem yet. There’s nothing in the prior three graphs that would explain why the decline in wRC+ from one season to the next for semi-regular players has risen by over two points, because none of the prior three age groups has fallen off sharply. One more group left; let’s look at the Old players, 35 and up: 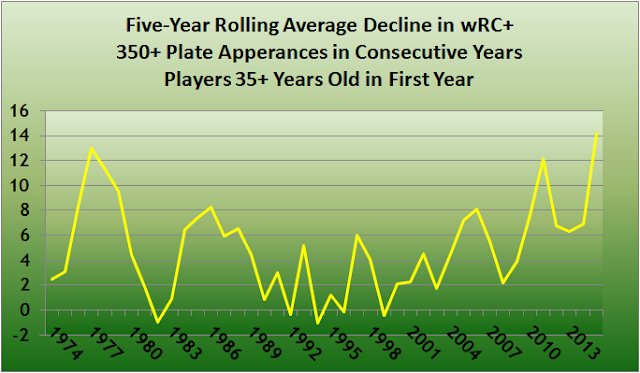 Whoa. That’s pretty dramatic. Year-over year, old players who are semi-regulars are declining a lot more now than they have been at any time since the mid-1970s, when trotting out the fossilized remains of Henry Aaron, Deron Johnson, and Billy Williams to play DH seemed like a good idea. This is the noisiest graph I’ve showed you so far, due to the limited number of older players in the game each year, but the marked climb since the 1990s is unmistakable.

Why is that? What’s happening to guys 35 and older? Nothing exactly leaps out, so here are some possible explanations:

Steroids. Admit it — that’s the first thing you thought. Same here. Fifteen or so years ago, you had all these guys in their late 30s putting up .300/.400/.500 lines with a couple dozen (or more, a lot more) bombs. Or at least it seemed that way. And sure enough, the five-year moving average decline in wRC+ for players aged 35 years or older was below the long-term average decline of about five wRC+ points for all but two years between 1989 and 2004. I think this points to a possibility of chemically-delayed aging patterns that have returned to normal, or perhaps even gotten worse.

More old guys. It’s not a secret that baseball players are better when they’re young than when they’re older. But, as noted above, the Steroid Era featured a lot of old guys hitting the crap out of the ball. Maybe that changed the thinking regarding roster construction, and teams are still carrying a lot of older hitters, even though they’re no longer as effective. Well, here’s a graph showing the percentage of players with 350+ plate appearances per season who were 35 or older. 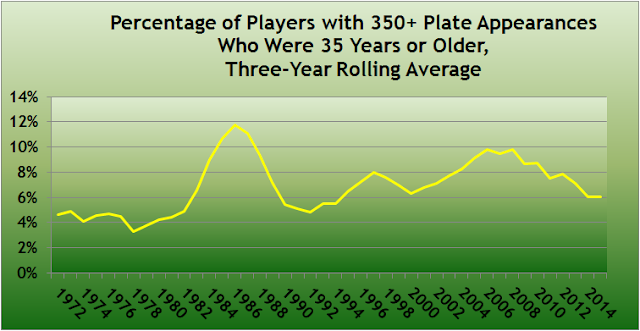 No, GMs aren’t nostalgic for baseball in the late 1990s and early 2000s. There are fewer older players with regular or semi-regular roles today now than at any time over the past 20 years.

Worse old guys. Maybe the problem is just one of quality. Maybe older players today just aren’t as good as they were in years past. Maybe there was something about babies born in the 1970s. (Disco? The clothes? Watergate?) Here’s a chart showing players who were at least semi-regulars in consecutive seasons, aged 35 or older in their first season, and their wRC+ in their first and second seasons. 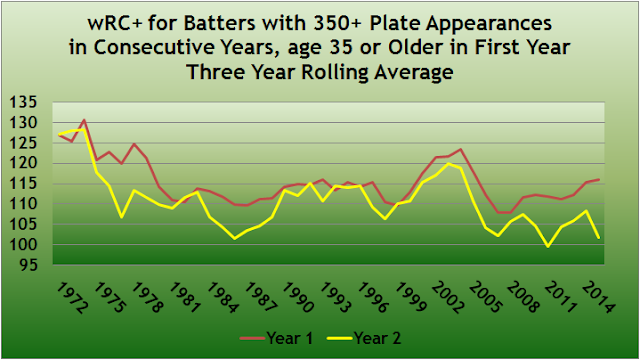 Nope, the older guys who’re good enough to get at least 350 plate appearances are still good players. They’re just getting worse faster, as evidenced by the widening gap between the red and yellow lines above.

Amphetamines. In baseball, the term performance-enhancing drugs is synonymous with steroids (and, to a lesser degree, HGH) in the public mind. But the list of banned substances is long, including all manner of illegal recreational drugs and, of relevance here, stimulants. Amphetamines — greenies, in baseball vernacular — have been associated with the game dating back to at least the 1960s. Baseball, of course, has a long season, with many more games than any other North American sport. Amphetamines help players improve reaction time, focus, and ward off fatigue. Those benefits accrue to everyone, of course, but they seem particularly relevant to older athletes, who face the inevitability of the aging process, mentally and physically. The amphetamine ban, which began in 2006, has likely had a larger impact on older players than younger ones. Of course, we’re talking about ten years of amphetamine testing, while the decline in older hitter year-on-year performance has lasted longer, so this can be only a partial explanation.

Sunk costs. Regular readers of FanGraphs are well acquainted with the concept of sunk costs; Dave Cameron has written about it repeatedly. Basically, a team should look at its total payroll as a cost of doing business, then allocate playing time in a manner that optimizes its chances of winning ballgames. That’s theoretical, of course. What actually happens is that teams are often reluctant to put high-salaried players into supporting roles. Take the 2016 Yankees, for example. They have a projected 2016 payroll of $230 million. They’ll spend about three quarters of that amount on nine players, all but one older than 30. Ideally, they should be willing to put CC Sabathia ($25 million in 2016, his age-35 season) in the bullpen, or make a DH platoon out of Mark Teixeira ($22.5 million, 36) and Alex Rodriguez ($20 million in each of 2016 and 2017, 40), or release Carlos Beltran ($15 million, 39) if any of them start particularly slowly. That’s what they might do with a 25-year-old making the major-league minimum. But the payroll obligation makes that move harder, even though that obligation’s a sunk cost — the team has to pay it regardless of how much the player plays. Here are the eight players aged 35 or older who, over the past two years, have suffered a wRC+ decline of 25 or more while retaining at least a semi-regular role, along with their contract status beyond the decline season:

All but Beltre and Byrd were below-average hitters in the second year, arguably not deserving of the plate appearances they received. But all but Suzuki, Utley, and Byrd were due at least eight figures after the year of their large decline. By contrast, a decade earlier, in 2004-2005, there were eleven semi-regular batters who, aged 35 or older, who had a wRC+ decline of 25 or more. Of them, only three — Luis Gonzalez and Jim Edmonds in 2005 and Bret Boone in 2004 — were in the midst of unexpired long-term multi-million-dollar contracts. Small sample size warnings and all, but there was a lot more future money committed to declining old batters in 2014-15 than 2004-05. Maybe those players wouldn’t be getting the plate appearances to meet the 350 threshold if it weren’t for the money that’s owed them.

Fastballs. One of the notable changes in baseball in recent years has been that pitchers throw harder. From 2007 to 2015, per PITCHf/x, the average fastball velocity increased from 91.1 mph to 92.4 mph. The increase was 1.3 mph, to 91.9 mph, for starters and 1.5 mph, to 93.2 mph, for relievers. Older batters can take advantage of their knowledge of the strike zone and pitch sequencing, but maybe they just can’t catch up to some pitches.

Granted, I’m guessing here. I’m leaning towards PEDs, both strength-enhancing and amphetamines, faster fastballs, and a tendency to put high-paid players in the lineup regardless of performance as the key drivers. But I’m not sure. This is an interesting trend, and sufficiently well-established that I don’t think we can write it off as a recent fluke. Something’s going on with players in the second half of their fourth decade that hasn’t happened in a long time.

Indians Are Legit Contenders in 2016
Brave-Hart: John Attempts to Slay the NL East

I think you hit on a lot of the obvious reasons here. I also think that the shift plays a role here too, as it has been stated that players last hope is to pull the ball more to get the power they no longer have. This means that they would be hitting into shifts more often when the connect, hitting the ball with little power to the opposite field, or just striking out.

Ah, good one. Hadn’t thought of shifts. I calculated net pull percentage (percentage of balls pulled minus percentage hit to the opposite field) for every batter with 350+ plate appearances in 2015. Net pull percentage by age, weighted by plate appearances: Young 12.0%, Prime 14.3%, Late Prime 14.5%, Old 19.6%. So if we assume that teams deploy shifts rationally (i.e., shift more for players who pull more) and that shifts are growing in popularity, that would adversely affect pull hitters by turning what would be pulled ground balls and soft liners into outs. Thanks for thinking of that.