The Effect of Fastball Velocity on the Slider

First I calculated the average velocity of each pitcher’s fastball for pitchers who threw at least 100 fastballs (FF, FT, SI) in each major league season from 2017-2021. Based on the calculated average fastball velocity, I divided the pitchers into three groups: 143-148 km/h, 148-153 km/h, and 153-158 km/h. I then further divided the groups according to the velocity and movement of the slider thrown in each. 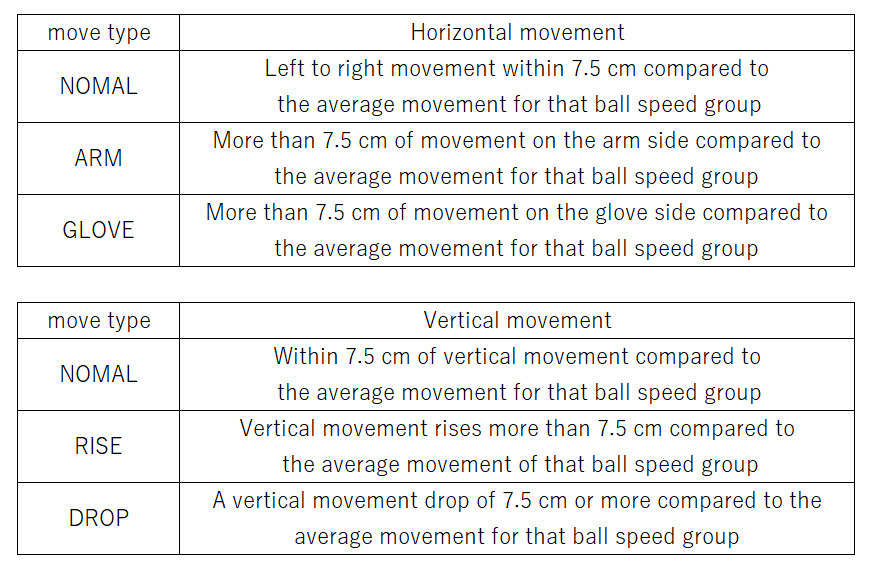 Then I calculated the Run Value/100 for each group. Let’s start with the velocity group between 143 and 148 km/h (click to enlarge).

The average velocity of fastballs in MLB is 150km/h, so this group is slower than average. RV/100 indicates only those pitches that were thrown more than 500 times.

One of the characteristics of this pitch speed group is that the GLOVE-NOMAL and GLOVE-RISE sliders are effective, but the other change groups are risky. It seems that sliders are less effective when fastball velocity is lower.

Next I examined the group where the pitch velocity is 148-153 km/h, considered an average velocity group (click to enlarge).

This group was effective in limiting runs except for the ARM slider, in contrast to the 143-148 km/h group where only the GLOVE-NOMAL and GLOVE-RISE change types were effective. It seems that the velocity of the fastball affects the ability of the slider to prevent runs from being scored.

The unique thing about this group is that they can deter runs in almost any pitch velocity group and movement. The slider seems to be quite effective when the fastball is thrown at such a high velocity.

I used Statcast data from Baseball Savant in this analysis, which is a translation of the original here.