Rookie Pitchers and the Strike Zone

So my question is, do rookie pitchers get a similar treatment from umpires with regard to called strikes as do veteran pitchers?

In order to evaluate this question, I first had to develop a strike zone to evaluate.  So using the PITCHf/x data from 2013, 2014, and 2015, I created a model of the strike zone which was broken down into tenth-of-a-foot increments and plotted the probability of a strike or ball being called when a pitch was thrown inside that range for all the balls and strikes looking over those three years.  I did separate strike zones for lefty hitters and righty hitters since umpires should have a slightly different perspective depending on the batter’s location.

The strike zones I arrived at are shown here: 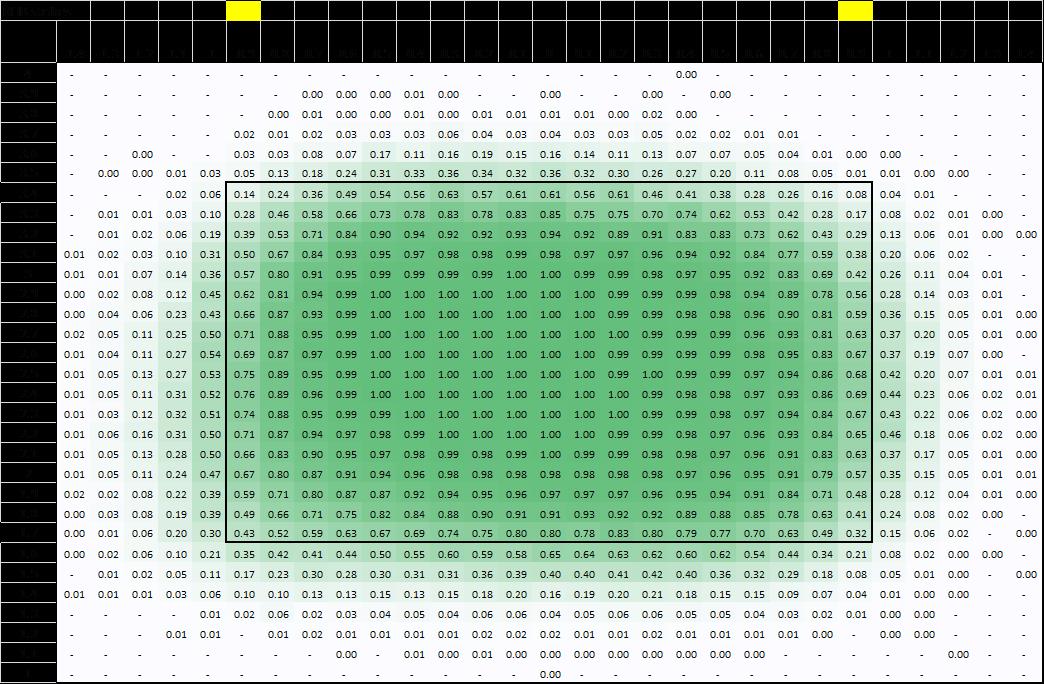 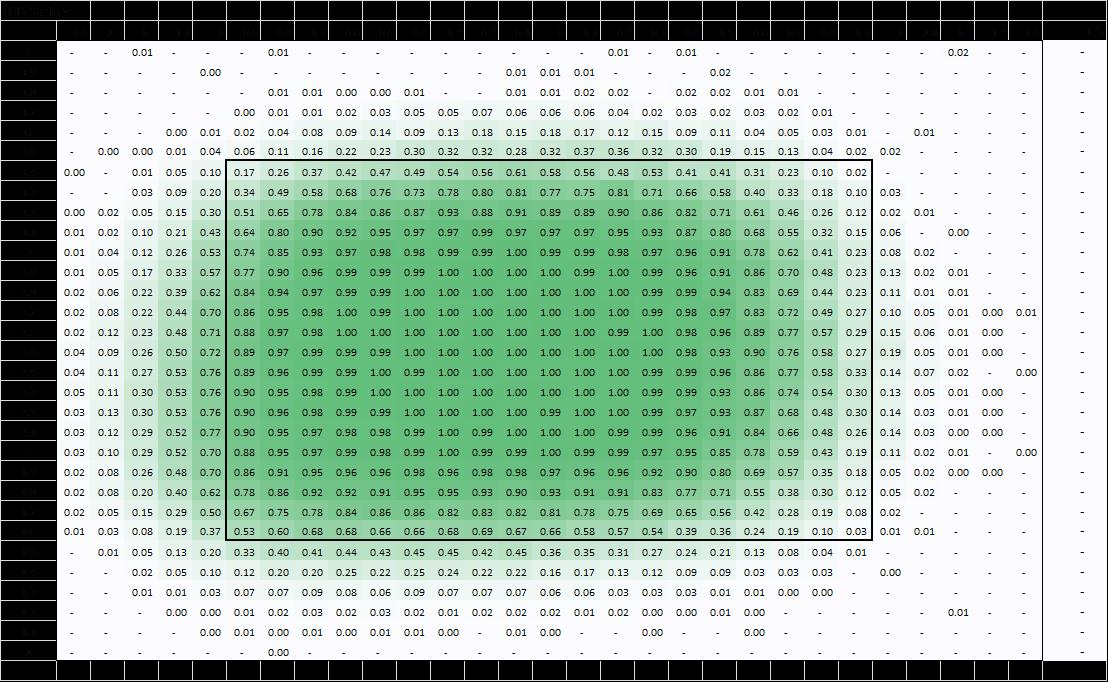 Once the strike zones were determined, I was able to go through the PITCHf/x data and tag every pitch thrown which resulted in either a ball or called strike with the associated probability of a pitch in that location being called either a ball or strike.

This then allowed me to take any individual pitcher and calculate an average “strike” probability for his called strikes.  As an example, here were my 2015 top 10 pitchers in terms of average strike likelihood (minimum pitches of 750 that were either balls or called strikes).

The lower the percent, the better. This means that on average when Dallas Keuchel got a called strike over the course of the entire season, that pitch was only likely to be called a strike 73% of the time. To show the impact this could have, Stephen Strasburg in 2015 had 402 called strikes; however, his Strike Likelihood% was 86.5%.

Strasburg is particularly interesting due to the fact that both him and Gio are on opposite sides of the spectrum, since the first thing that would jump out to you is catcher framing as part of the delta. Looking at the top 10 list from 2015 for example you notice a lot of Pirates and of course Francisco Cervelli was loved by the catcher-framing metrics this year.

But catcher framing shouldn’t really be a major issue in the evaluation of rookie versus veteran pitchers. It’s unlikely rookies wouldn’t be caught by the primary catcher.

My next step was to calculate the Rookie Strike Likelihood% for 2013, 2014 & 2015 and compare it to the Non-Rookie Strike Likelihood% for those same seasons to see if there was any “bias”. I set my minimum total balls + called strike total to the 1st quartile value for that season. Remember the lower the SL% the better — this means a pitch can be “worse” and still called a strike.

So while the gap is not always huge, there is in each year a delta in the SL% which favors the veteran pitchers.

What does this mean? This could mean nothing. It could be entirely due to rookies just not working the zone in the same way veterans do, or it could be related to the specific pitch selection (fastball vs. curve vs. slider) and how those different pitches are typically located in the zone. It could be related to how often rookies are ahead vs. behind in the count against batters and what that means for their next pitch location.

Then again, it could just mean that there is some bias against rookies where they don’t get a sort of “Jordan” impact where your reputation gets you a call that maybe you wouldn’t have gotten without it. In all likelihood it is a combination of both. But given that this seems to be a real thing, it could also be used in the evaluation, again, of catcher-framing metrics. Catchers who catch an abnormally high amount of rookies in a season could see their framing “skills” negatively impacted due to their counterparts alone and not a diminishing skill on their part.

i like to fight prices. i sometimes make my own posts at: http://saber-fighters.blogspot.com/

I wonder whether looking at the count would help your analysis. Umps call strikes differently based on count and where games played. Obviously, your sample is large enough to make home/away irrelevant.

Matt, i did think of that and mention that possibility in my post. So i went back and just did some pivots on the data where i setup the different count options (0-0, 0-1, 0-2, etc….). It was actually a bit surprising to me how consistent the counts were for Rookies and Veteran pitchers over the course of the season. As a result, i don’t believe the counts that rookies find themselves in when compared to veterans would lead to this bias.

Interesting. It sounds like you’ve found something and that bias does make sense.

Matt, i did think of that and mention that possibility in my post. So i went back and just did some pivots on the data where i setup the different count options (0-0, 0-1, 0-2, etc….). It was actually a bit surprising to me how consistent the counts were for Rookies and Veteran pitchers over the course of the season. As a result, i don’t believe the counts that rookies find themselves in when compared to veterans would lead to this bias.

Matt, I can’t help but wonder if the difference is more due to pitch type, movement and control? Noticed most of the pitchers with the lowest SL% utilize a sinker frequently. Maybe umps struggle with that pitch? Also makes sense vets on averaage would throw more breaking pitches, have more refined breaking pitches and have better control to work the edges of the zone and get some calls rather than miss badly and then fire one down the middle. Strasburg has great swing and miss stuff but doesn’t throw a sinker or do much painting.

Could be. I doubt it. Although I suppose controlling for pitch type would help.

Very interesting. I wonder if there is similar bias for rookie batters.