Leading 3-1 and one out away from being a World Series Champion, Los Angeles Dodgers pitcher Julio Urías faces Tampa Bay Rays infielder Willy Adames. The first two pitches of the at-bat, fastballs resulting in a swinging strike and a called strike, clock in at 94.9 mph and 94.1 mph. The last pitch of the at-bat (and subsequently the World Series) comes on the third pitch. Urias fires a third straight four-seam fastball, this time for a called strike three at 96.7 mph. This may not feel particularly fast in a day and age in which some pitchers consistently hit 100 mph, but for Urías, there was a little something extra behind that final pitch. Of the 682 four-seam fastballs that Urías threw in 2020, this pitch was the fastest. While it may have been a coincidence that his hardest-thrown pitch was also in the most important situation, I suspect the significance of the moment was a key factor.

I doubt this claim comes as much of a surprise to anyone. Most people in crucial situations will push a little harder to ensure the outcome is in their favor. To test the theory, I examined pitch velocities from the 2019 regular season. I chose 2019 rather than 2020 to ensure the situations were most similar to a normal year in case any of the irregularities of baseball during COVID influenced the data. In general, it appears that two-strike fastballs are thrown harder than fastballs in other counts. I graphed the respective densities of fastball velocities below. 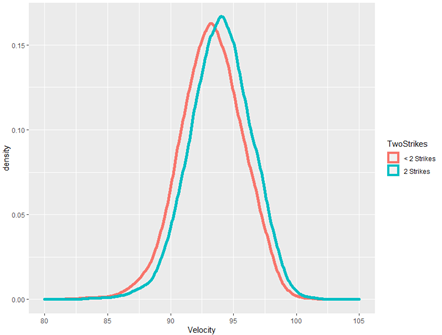 A two-sample t-test on the data confirms that the increase in velocity is statistically significant. At an individual level, the increase in mean velocities of two-strike fastballs was statistically significant for 86% of the 515 pitchers who threw 100 or more fastballs in 2019. The greatest rise in mean velocity was 2.2% for Clayton Richard, who went from 90.5 mph to 92.5 mph when the count reached two strikes. 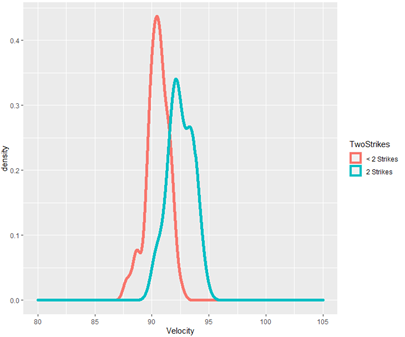 While the jump in fastball velocity was successful for Urías at the end of the World Series, it was still to be determined whether this was a successful strategy. To test this, I first used weighted on-base average (wOBA) to capture the offensive value produced by the outcome. It is worth noting that the average wOBA is higher on outcomes with fewer than two strikes. When the count reaches two strikes, the batter must face the threat of striking out and can no longer be selective, leading to an increased likelihood of weak contact. This leads to the average pitcher allowing 37.5% lower wOBA with two strikes.

A decrease in wOBA is not necessarily indicative of a successful strategy, it is expected. The size of the decrease needs to be large enough to justify the increase in velocity. First I used a simple comparison of the decrease in wOBA for pitchers who increased their two-strike fastball velocity and for pitchers who did not. In looking at the boxplot, with pitchers who increased their velocity on the right, there appears to be little to no difference in the medians. While the bottom 25% performed worse for pitchers who did not increase their velocity, the top 50% do not appear much different. This suggests that most pitchers who increase their fastball velocity will not see much of a difference, but the below-average pitchers could potentially see an improvement. A two-sample t-test confirms the suspicion that the mean wOBA decrease is essentially the same for the two groups of pitchers. 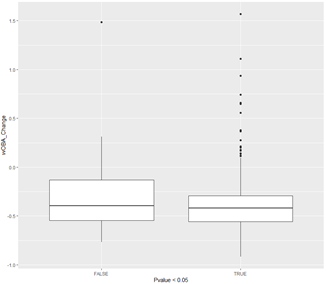 As clear as the lack of difference appeared, I was not yet ready to give up on the strategy. Instead of just measuring whether the jump in velocity was “big enough,” I wanted to consider the magnitude of this rise. The Clayton Richard case did not make me too optimistic though, as his major increase in velocity led to just a 29% decrease in wOBA. Conversely, Andrew Chafin saw the largest decrease in wOBA at 91.6%, while only increasing his fastball velocity by 0.6%. Overall, the relationship between wOBA change and velocity increase appeared quite weak, with the LOESS curve showing little form. ANOVA suggests in both a linear model and general additive model that wOBA change could not be predicted by velocity increase. 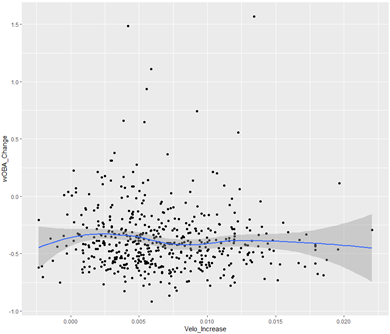 The next step was to consider a more selective threshold than two-strike counts. Instead I considered two-strike counts with two outs. Only 73% of pitchers showed a significant increase in their fastball velocity. Once again, a two-sample t-test failed to note any relationship. Unlike before, the linear model for two outs and two strikes suggests a negative relationship between the velocity increase and the decrease in wOBA. The strength of the model is extremely weak, so the strategy is quite inconsistent. But still, the magnitude to which pitchers increased their velocity in these situations was a factor in determining how much more successful they were. 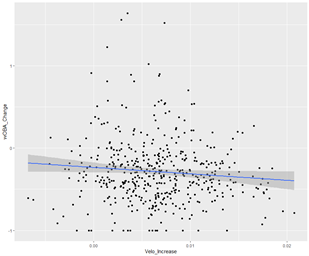 I then tried to be even more selective with situations, such as one-run leads and the 9th inning, but the number of cases went down enough that the reliability of the results was not worth the minor amount of added information. It appears that when a pitcher increases their fastball velocity in just a few, important situations, they are more likely to be successful. The intuition behind this makes sense, as the batter is less prepared for the jump in velocity after seeing the pitcher’s usual fastball. Still, major league hitters are able to adjust and prevent the strategy from being a guaranteed improvement.

The trend was not visible with just two strikes, potentially because this was too frequent and the batter may be expecting it. It is important to note that the mechanics of this jump in velocity are not examined in this analysis. It is possible that this could lead to greater risk of injury through overexertion. On a similar note, it is possible that the strategy could increase the rate of fatigue, meaning that the strategy resulted in a loss of value in the long term, despite short-term success.

As for the risk in accuracy, the strike percentage was no different across magnitudes of the increase in velocity. While this doesn’t take into account where the pitcher aimed, a pitcher’s ability to throw a strike was not inhibited. Another important note is that this analysis only considered four-seam fastballs, meaning that pitchers who predominantly use two-seamers or sinkers were not considered.

While this analysis was interesting and informative, it was by no means comprehensive. As for extending this analysis, it would be worthwhile to perform a similar procedure on other measures such as spin and movement individually or multiple variables in conjunction with velocity. While I suspect the increase in effort is most prominent with fastballs, the prevalence of increased effort is likely also present in other types of pitches. Another option is to change the measure used to evaluate success, such as whiff rate or batting average against.

Regardless, the challenges with implementing this analysis in any tangible way are the inconsistency of the results and the lack of proof that increasing velocity is a conscious effort. It is possible that the increase in effort is not intended, be it from adrenaline or sub-conscious behavior instead. So while the strategy appears to be potentially relevant, increasing velocity in rare occasions may not be as beneficial overall as it was for Julio Urías.

Modeling the Effect of Deadening the Baseball
Jake McGee: The One-Pitch Pitcher

Member
Member
Trey
You can flag a comment by clicking its flag icon. Website admin will know that you reported it. Admins may or may not choose to remove the comment or block the author. And please don't worry, your report will be anonymous.

Really interesting research. I wonder if there would be a stronger correlation if you were able to isolate this on a pitch by pitch basis rather than for a pitcher as a whole? e.g., maybe Clayton Richard’s 2 strike fastballs with the highest increase in velocity perform better than his 2 strike fastballs that increase less or not at all, but that could be getting muddied by looking at the decrease in 2 strike wOBA for all of his fastballs? No idea if it would change much, but could be another way to advance this topic!

Author
Member
Bryan Woolley
You can flag a comment by clicking its flag icon. Website admin will know that you reported it. Admins may or may not choose to remove the comment or block the author. And please don't worry, your report will be anonymous.

This is an interesting point, thank you! The analysis I use in the paper doesn’t account for the possibility that pitchers do not always attempt to throw harder in critical situations, but the distinction could be important.

Member
Member
ScottyB
You can flag a comment by clicking its flag icon. Website admin will know that you reported it. Admins may or may not choose to remove the comment or block the author. And please don't worry, your report will be anonymous.

Great job!
I’d think that the increase in velocity needs to outweigh the potential loss of control/precision of the pitch.