One of the newest members of the San Francisco Giants, lefty reliever Jake McGee, is coming off one of his best years in the major leagues throwing one pitch: a fastball. Seemingly by magic, McGee twirled a fastball 97% of the time he threw in 2020 on the way to a 2.66 ERA, 0.836 WHIP, and 11 strikeouts for every walk. I will be taking an in-depth look into McGee’s success and failure over his career, which might give better insight as to how he can continue to perform and how a major league reliever can succeed with only one pitch.

McGee was drafted in 2004 by the Tampa Bay Rays and made his major league debut with them in 2010. After his first full season in 2011, McGee posted extremely strong numbers in 2012, 2014, and 2015 with an ERA+ (it will become clear why I use ERA+) of 148 and a K/BB of 5.02 within those four seasons. After the 2015 campaign, McGee was traded along with Germán Márquez to the Colorado Rockies in exchange for Corey Dickerson and Kevin Padlo.

McGee immediately regressed in Colorado, as his ERA+ went from 163 to 103 (ERA+ adjusts for ballparks, which is particularly useful at Coors Field) and his K/BB sunk from 6 to 2.38 in the transition from the Rays to the Rockies (2015-2016). Of course, some of this decline is attributed to the difficult conditions of Colorado, but there is also additional evidence to show that McGee’s style of pitching contributed to his declined performance. Following 2016, McGee remained a strong-yet-aging reliever and was ultimately released by the Rockies in July of 2020.

Four days later, McGee signed with the Los Angeles Dodgers and proceeded to outperform even his 27-year-old self with an incredible season. McGee finished in the 99th percentile in K%, 96th in BB%, 95th in xERA, and 95th in xwOBA. So what exactly was the cause of this change and what did McGee do to get there?

The short story in terms of McGee’s velocity is that it went up. He managed to increase his average fastball velocity 1.5 mph from 93.4 to 94.9 from 2019 to 2020. Pitchers struggle to gain velocity in their career at all, and McGee managed to do it at age 33. This jump was not only impressive as a feat, it is directly correlated with a drastic improvement in McGee’s performance. With fastballs thrown above or equal to 94 mph, opponents hit .218 and slugged only .338. On fastballs below 94 mph, batters hit .388 and slugged .758. That is a difference of over .4 bases given up per at-bat. Furthermore, McGee’s drop in velocity from 2015-19 corresponds to his drop in results. In this span, McGee recorded an ERA of 4.40 compared to 2.83 prior to his velocity drop. 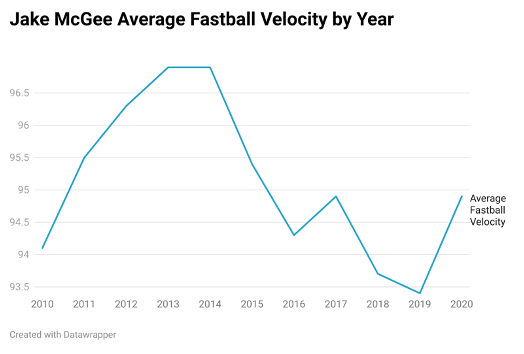 McGee’s velocity uptick was a big factor in his success, but that’s a fairly obvious and uninteresting analysis of his turn-around. The more surprising change is that McGee decided to throw exclusively one pitch.

McGee employed a strategy in 2020 that is far different than I have seen from any other pitcher in the majors: 97% fastballs. While there are pitchers who throw all fastballs, these pitchers include a two-seamer or a cutter variation that have different velocities or movements than their main four-seamer. McGee’s sole use of a four-seam fastball lacks this variation.

Prior to 2020, McGee had messed with a combination of sliders and curveballs to supplement his fastball-heavy pitch mix, but after ditching the curveball completely in 2017, and almost entirely losing the slider in 2020, McGee reached the career-high of 97% fastballs. 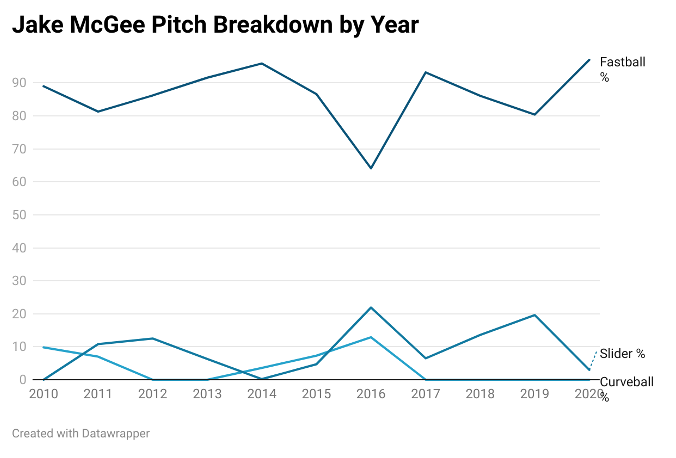 Similar to velocity, these trends correlate very well with McGee’s performance. The dip in fastball usage from 2015-17 mirrors McGee’s worsening stat line, and his 97% in 2020 associates well to his success. This is notable since all intuition suggests that keeping hitters off-balance and shielding their ability to guess the incoming pitch helps pitchers to get outs. McGee not only rejects this notion, but as we will see next, also takes it a step further and rejects the idea of mixing up location.

McGee committed to throwing only fastballs almost exclusively up in the zone. His August 15th, 2020 appearance against the Angels is a perfect example of his pitch strategy. McGee came into a tied game with one out in the eighth inning and retired Shohei Ohtani (L) and Taylor Ward (R), then he came back out and sat down Brian Goodwin (L), Max Stassi (R), and Luis Rengifo (S) in order in the ninth.

McGee threw 16 pitches, all fastballs, all called up in the zone by catcher Will Smith. Each one of them was in the exact same location. 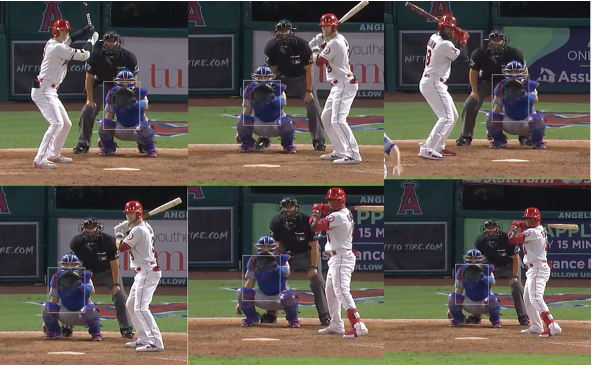 This is astounding. McGee threw the same pitch, in essentially the same spot (he was 13-for-16 in getting the ball up) 16 times in a row, and yet he got five consecutive outs on three fly outs, a groundout, and a strikeout. While I cannot find available data on catcher setup locations (although I am sure it exists), it seems McGee decided to hammer fastballs up in the zone to both lefties and righties throughout the 2020 season and had real success as a result.

This decision is supported by McGee’s career data. Here is the MLB’s zone profile broken down by batting average vs. McGee’s. 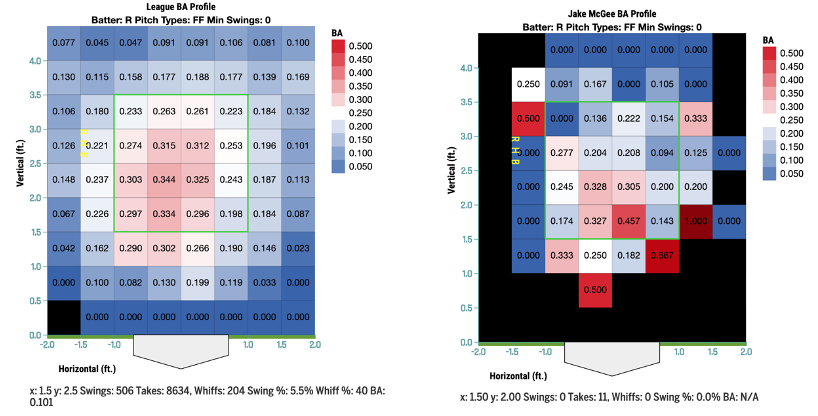 While for lefties, McGee has more success on fastballs up and away, each zone still shows what it seems the Dodgers have figured out: in general, McGee is more effective on fastballs up than down.

Here’s a four-seamer up in the zone:

And a four-seamer at the knees:

The third drastic change that McGee demonstrated was his ability to pound the strike zone. This final change was where McGee separated himself from other MLB pitchers. With such a reliance on his fastball, it would make sense that McGee threw more than the average number of strikes, but his improvement in 2020 to 60% strikes on fastballs is unmatched. McGee was in the 96th percentile of percent fastballs thrown in the zone in 2020, and he almost doubled the league average of 32%.

For McGee, strikes led to getting ahead in the count, and consequently, more pressure on hitters. McGee’s 2020 numbers show a significant spike in balls thrown within the zone, and as a result, pitches thrown ahead in the count. 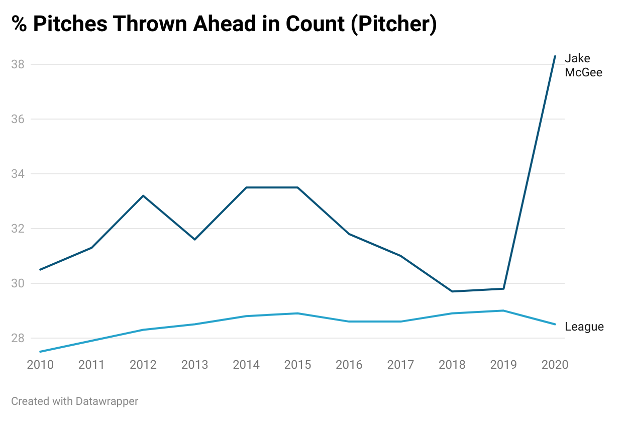 Again, we see that McGee’s ability to attack hitters correlates nicely with his results. The decline from 2016 to 2019 lines up with his worsening performance in Colorado in that span. Additionally, his alarming uptick in 2020 (exaggerated due to the small sample size) coincides with his stellar numbers in LA.

This one is easy: McGee is better against right-handers. Over his career, righties have hit .222 off him while lefties have hit .248. This difference was magnified in the shortened season when righties hit .135 vs. .304 for lefties. The Dodgers utilized McGee better than any team has in the past (partly because of their immense depth), making his percent of pitches thrown to righties the highest it has been in his career. 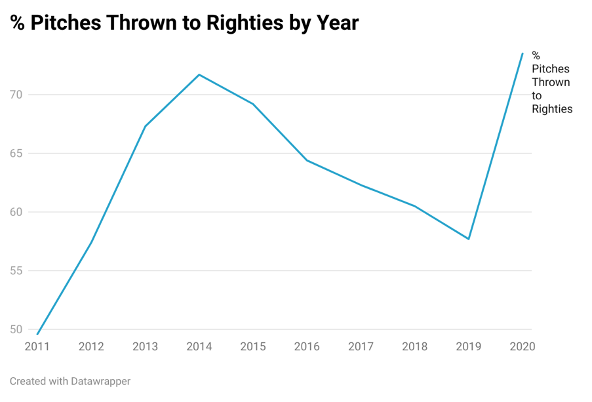 Once again, a similar shaped graph is formed that registers with McGee’s results.

Jake McGee made many improvements in 2020, and the combination of an increase in velocity, fastball usage, pitches up in the zone, strikes, and pitches thrown to righties have shown to have their effect.

The combination of all of these events can be lumped into McGee’s “optimal state.” By percentage, it is clear that McGee and the Dodgers spent time increasing situations in order to reach this state as much as possible. 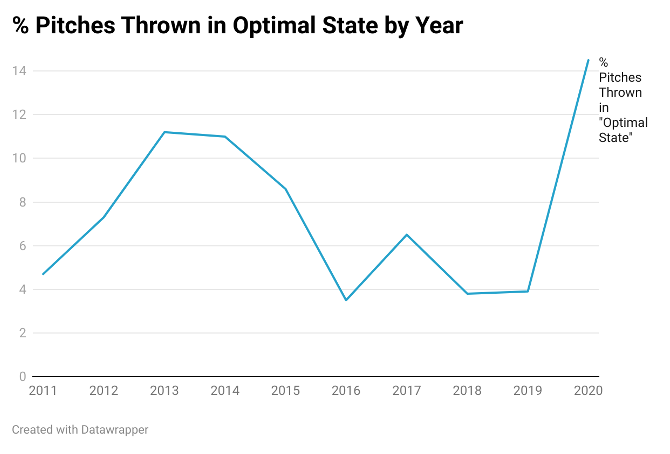 *”Optimal State” is fastballs above 93 mph, up, to right-handed batters, ahead in the count.

In his optimal state, McGee gives up at batting average of .112 and a slugging percentage of .119 (league is .163/.247). In other words, he is absolutely dominant. For this reason, McGee has no need to mix his pitches or location. By attempting to recreate this scenario every single pitch, hitters seemingly cannot adjust. Although all logic would suggest that this strategy would result in worse numbers, McGee has defied common sense with indisputable evidence.

These correlations bring up more questions: Does this model of throwing one pitch translate to pitchers across the league? Although I wouldn’t advise Clayton Kershaw throw his curveball 97% of the time, it would be interesting to see if this strategy is projectable to other pitchers.

For example, Drew Pomeranz, who is high on the list of fastball throwers, has a significantly better BABIP when throwing his fastball compared to his curve. Although he lacks the overall control that McGee has, he also saw success in 2020 as a result of increased fastball usage and velocity. Pomeranz, who is a fastball/curveball pitcher for San Diego, boosted his fastball usage from 52% to 80% last year and upped his average fastball velocity from 92.8 to 94.6 mph (after moving to the bullpen full-time). Although he only threw 18.2 innings, Pomeranz dominated in 2020, only giving up three earned runs on the way to an ERA+ of 300. Although it seems unconventional, if Pomeranz ditches his curveball entirely, he could see the same results that McGee found.

This season will be helpful for pitchers like McGee and Pomeranz who are out to prove that 2020 was not a fluke. McGee’s improvements in all aspects of his pitching point to real changes, and if he can continue to do everything in his control to get batters out and maximize pitching in his optimal state, I expect he will find continue to find success.

Rearing Back: Pitchers’ Effort in Important Situations
Pulling a Rockies Pitching Solution Out of Thin Air
newest oldest most voted

Excellent article. McGee is literally a unicorn for this. I still find it crazy that it was worth it to drop all his other pitches, and I wonder what led the Dodgers to tell him that he should not even throw a slider/curveball 1/10 times. Maybe it was really that bad. I don’t know. I don’t know if at this stage it is too late for him to develop a second pitch, but I guess he should keep doing whatever works. P.S. my favorite graphic of this article was the one that showed opp BA by FB location. Really reinforces… Read more »

Author
JP Wong
You can flag a comment by clicking its flag icon. Website admin will know that you reported it. Admins may or may not choose to remove the comment or block the author. And please don't worry, your report will be anonymous.

Thank you. I’ve been watching some 2021 McGee outings also, and it seems he is throwing the slider more often (7/53)(13%), which makes me think you are right and it was someone with the Dodgers telling him to throw fastballs. Cant complain about this season’s success, though since he has thrown 4 innings 1 H 0BB.