January 7, 2022
When the 2021 regular season concluded, there was the following exchange in the “Hey Bill” section of the Bill James Online baseball community, with Bill’s response starting at “Answered:”

Is it possible to calculate an expected number of 1-run games for a team in a season? The reason I ask is that the Mets played in 66 1-run games this year, 40.7% of their games. That seems like a whopping big number . . . but is it?

It’s a very large number, but I wouldn’t know how to calculate an expected number. I don’t even know what the variables would be. I suppose one-run games are slightly more common among teams which are near .500, and obviously they would be significantly more common in a low-run environment than in a high-run environment.

Inspired by this interaction, I built a dataset to answer those questions and a few more that popped up along the way. Let’s start with the easiest one:

Yes, that is a big number, but not “whopping” big.

I took the game logs for every team/season from 1900 to 2020 and put them in run differential categories. I called extra-inning games category 0. Double-digit run differentials went into category 10. The remaining games were all put in the slots corresponding to the run differentials. For this study, we’re only concerned with the games in slots 0 and 1. What I didn’t do is categorize the extra-inning games in a slot corresponding to the final outcome. In this case, we’re trying to project the number of one-run games, so I thought it would be more instructive to look at game states at the “end of regulation.” Once a game goes to extra-innings, especially with the zombie runners introduced in 2020, it might end up with a differential of more than one run. It seems to me the conditions for producing an extra-inning game are the same as for one-run games.

What is the record for most one-run games?

The 1971 Astros and the 1993 Royals both played 58 one-run games (not including extra-inning games). That is also the record for percentage of one-run games.

Which teams won the most one-run games?

The year of the pitcher, 1968, is well-represented here and elsewhere in this study, showing the strong influence of a low run environment on tight games.

Which teams lost the most one-run games?

What is the record for extra-inning games played?

These are all extra-inning games, whatever the run differential ends up being.

Which teams won the most extra-inning games?

You probably recognize the ’59 Pirates. Roy Face set the pitcher’s winning percentage record for the Pirates that season, going 18-1. The team only went 60-75 in games that ended in 9 or fewer innings. You might expect regression the following season, but of course, the Pirates were World Champs in 1960, winning more than 70% of their extra-inning games (12-5).

Which teams lost the most extra-inning games?

What is the record for most combined one-run and extra-inning games played?

Which teams won the most combined one-run and extra-inning games?

Which teams lost the most combined one-run and extra-inning games?

With the lists out of the way, let’s move on to the meatier question.

Is it possible to calculate an expected number of 1-run games for a team in a season?

We can do a fairly decent job, depending on your definition of “fairly decent.” Many of you have better math and analysis chops than me, so you might be able to get closer.

I took all 2,542 teams and put them into groups based on both winning percentage and run environment, as proposed by Bill James. Following Bill’s lead is often a good idea.

I put teams in five roughly equal groups according to their winning percentages and labeled them “terrible,” “poor,” “average,” “good,” and “great.” Don’t get hung up on whether or not some of the “great” teams are really “good” or the “poor” teams were actually “terrible.” That’s not the point. They’re just labels, so we can easily name and distinguish the groups. I used an odd number of groups to ensure there was a central segment that we could call “average,” hovering around .500, to test Bill’s assertion that teams around .500 would be expected to play more one-run games.

Here are the winning percentage ranges:

I calculated the runs per 9 innings (R9) for every team/season. This is the total runs scored by the team and their opponents. One could use separate run environments for home and road games. I opted not to do so in this case, thinking the benefit was not worth the effort or complication. As you’ll see, the impact of the run environment on one-run games is clear-cut. Then I put teams in five roughly equal groups: “lowest” run environment, “low,” “average,” “high,” and “highest.” I wanted to match the number of groups used for the winning percentage side of the analysis.

Here are the run environment ranges:

Given those two variables, I arranged all the teams into a two-dimensional matrix (think “magic quadrant” but 5 x 5), like “Terrible/Lowest” and “Great/Highest.” Groups had a minimum of 86 teams (Terrible/Low and Good/Highest) and a maximum of 130 (Average/Average). Then I took the median percentage of extra-inning and one-run games (Xand1) for each group and sorted from most to least.

And how did that work out? Pretty well, but not the way I thought or hoped (probably naively) it would. The sorted list ended up in exact order by R9 — the lowest R9 group had the most Xand1 games, then the low R9 group, the average, the high, then the highest. Within those groupings, the WPct groups varied quite a bit. In the lowest R9 group, the WPct group followed the pattern I expected going in: average, poor, good, terrible, great. The average WPct group wasn’t in the top for any other R9 group and was actually last for the high R9 and highest R9 groups. That made it clear that the primary factor is the run environment. I hoped it would allow some formula like 3 x R9 + 1 x WPct.

To salvage something from that, I simply took the median percentage of games for each group and used that rate for each team to estimate their Xand1 games. Doing that resulted in a net error for the entire dataset of 30 games fewer than actual, with an average gross error of 5 games in either direction.

Seeing that the run environment influence was stronger than the winning percentage, I built a second model using only that. Using the same groupings (lowest to highest R9) as before, I mapped the Xand1 percentages. This yielded a straightish line: 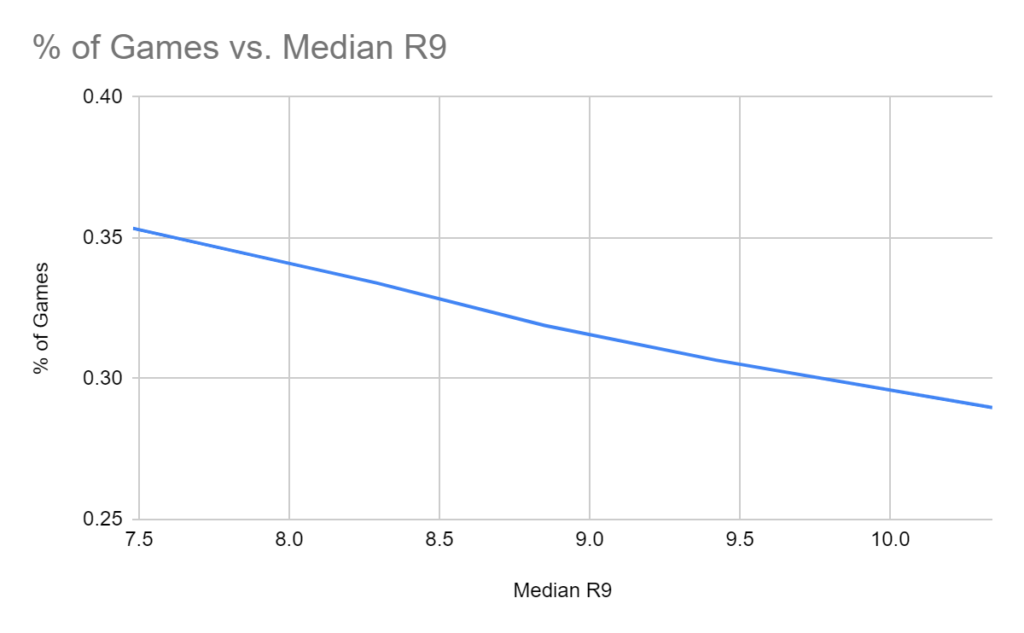 Thinking that more groups might be better, I divided the teams into R9 deciles. This gave the same basic results, ordered from lowest R9 to highest and giving a mostly straight line again: 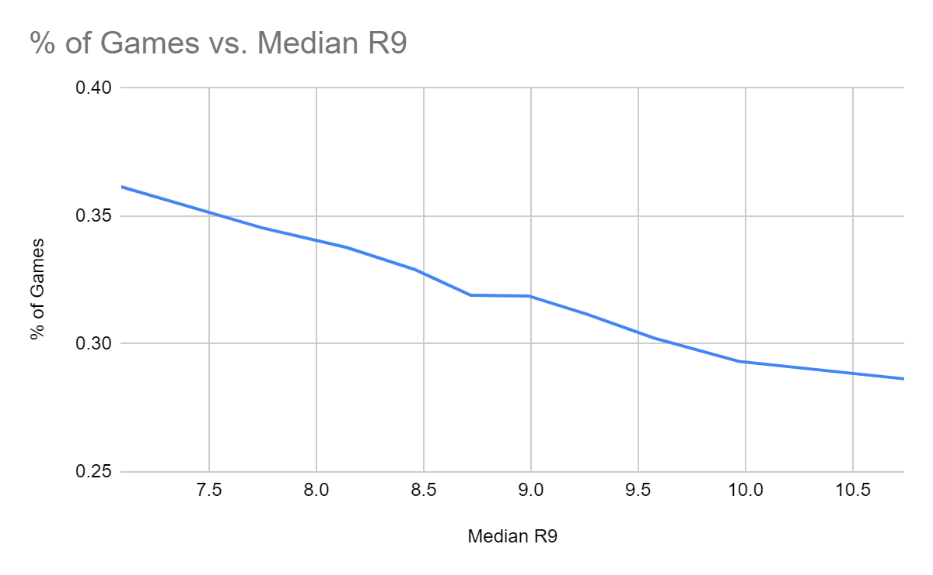 Straight lines I could deal with. Applying some fundamental algebra, I arrived at the formula:

Applying this formula to the dataset gave very similar results with a net error for all teams of 15 games fewer than actual and a gross error per team of plus or minus 5. This model hits the exact number of Xand1 games for 173 teams (6.8%) and is within 5 games for 1,563 (61.5%).

Given how close the results are and the simplicity of a single-variable formula, I prefer this second model.

How To Improve the Models

This is an easy one: learn more modeling techniques. I’m sure you could build a linear regression model or something and arrive at better results with less manual work. I’m retiring from my day job next year and hope to spend time improving my skills. Maybe I’ll return to this data as I build my technical skills.

How do our models do at projecting the 2021 Mets?

They fit into the Poor/Low category for Model 1. Looking that up in our table, they’d be expected to have 33.9% of their games tied or within 1 run at the end of regulation, which is 55 games.

The Mets actually played 71 such games in 2021. That’s a pretty big error. The original poster, Kevin, was definitely on to something. The Mets did play an unusual number of one-run and extra-inning games. By Model 2, that’s an error of 18 games, tied for 18th most all-time. By Model 2, the error is 16 games, which is tied for 36th most.

Do teams that play a lot of one-run and extra-inning games perform better in those games?

You hear announcers say this sort of thing all the time — “This team plays a lot of close games, so they’re used to the pressure and perform better than their opponents.” Is that true?

So it seems like there’s nothing there. Teams that play a lot of close games do not appear to gain some sort of experience that allows them to perform better than expected in those games.

More of my work can be found on my blog.

Interesting article! I wonder if you did something a little more robust with the run environment variable, your model would be more accurate. You could either do total R/9 (off+def) or separate them out (Runs Scored/9 and Runs Allowed/9), then include the league run environment, either as a separate variable or by indexing each team to the league average (either as a ratio like OPS+ or by using z-scores). I would think a team that is extreme relative to the league in either direction would play significantly fewer one run games. Additionally, lower league run scoring environments would likely yield more one run games, since the floor of zero runs is closer to the league average.

Love the simplicity of this, good insight. I’d be curious how team strikeout rates and home run rates affect this stuff.

Thanks for the feedback! Note to self: “Simplicity is a feature, not a bug.” 😉

An alternative to this is to take historical Vegas odds and reverse engineer what the implied probability of a 1 score game is.