Every year, we hear about batters taking a new approach at the plate that they expect to generate better outcomes. But, as has often been shown, a lot of player tendencies are hard-wired. Players generally don’t change that much. What happens when they do?

In June, I looked at hitters who were pulling the ball a lot less or a lot more than they had in 2014. The conclusion was that it didn’t really make much of a difference, in aggregate, on offensive performance, although some players did markedly better and some did markedly worse. Now that the full season’s in the books, I decided to take another look at the comparison to see how a change at the plate affects hitting.

To look at this, I selected hitters with 350 or more plate appearances in both 2014 and 2015, corresponding roughly to at least half-time play. There were 173 such players. Using that sample set, I evaluated three observations you hear a lot about modern hitters:

I looked for changes in pull tendency, ground vs. air batted balls, and aggressiveness at the plate, measured by net pull percentage (i.e., percentage of balls pulled minus percentage hit to the opposite field), ground ball/fly ball ratio, and swing percentage as proxies. To gauge the impact of the changes, I looked at change in wRC+, since it is a park- and season-normalized comprehensive measure of hitting.

It’s important, I think, to make a distinction between a change in outcomes to a change in approach. Take pulling the ball. If a batter pulls the ball less from one year to the next, it could be because he’s consciously trying to spray the ball over the field more in order to become less predictable and therefore harder to defend. Mike Moustakas comes to mind. But a batter may pull less because of the effects of age and/or injury, making his bat slower and unable to turn on inside fastballs. Since we can’t divine approach from full-season statistics, we’ll have to satisfy ourselves with outcomes. Among the 173 players in the sample, Victor Martinez had the largest decline in hitting the ball hard, and his wRC+ decline of 90 points was similarly the largest in the group. That doesn’t mean that he went into the season deciding to hit the ball softer, and that his strategy backfired. Rather, it was a reflection of Martinez’s health. A change in outcomes isn’t necessarily reflective of a change in approach. 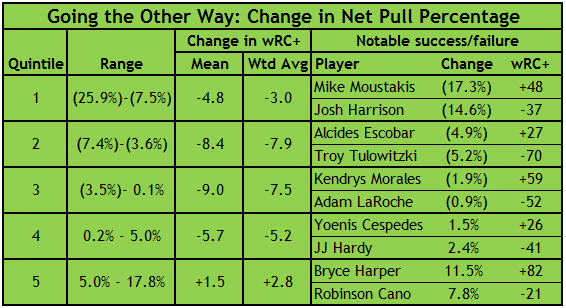 Players who pulled a lot more or went the other way a lot more in 2015 than in 2014 did better than their peers. (Again, the average player’s wRC+ declined by 5.2 points, or 4.3 weighted by plate appearances). Those who went the opposite way a lot more improved relatively, and those who pulled a lot more improved both relatively and absolutely. If there’s a benefit to hitting to the opposite field for pull-happy sluggers who make too many outs by hitting the balls to shifted infielders, we’d see the change in wRC+ decline as the net pull percentage increases. That’s not what happened. Bryce Harper, Chris Davis, and Shin-Soo Choo, among others, benefited from pulling more, not less. 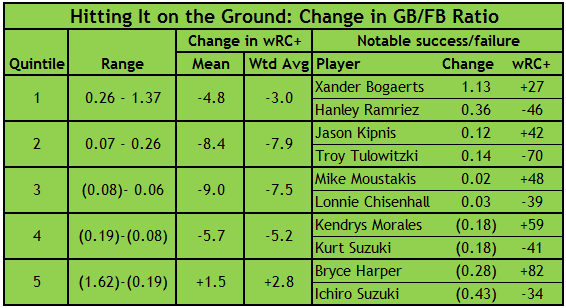 Players’ ground ball tendencies, similar to their pull tendencies, resulted in positive variance at both extremes. Players who hit the ball on the ground a lot more improved relative to their peers, and those who hit it in the air a lot more improved relatively and absolutely. Harper’s an outlier again—he pulled a lot more, hit the ball in the air a lot more, and produced a lot more runs. It’s amusing to see Red Sox teammates Xander Bogaerts and Hanley Ramirez as prime examples of what can go right or wrong if you hit a lot more ground balls. 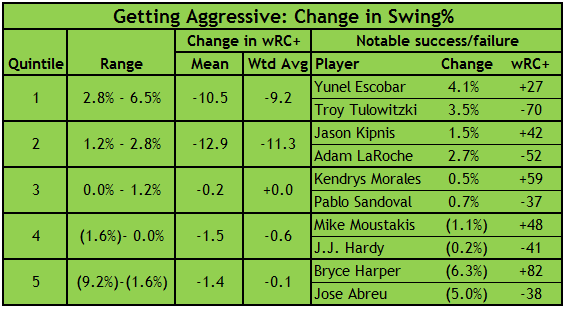 The outcomes for players who changed their pull tendency or proportion of balls hit on the ground were equivocal: Players did better at the extremes, but not in the middle. That wasn’t the case for aggression at the plate. In aggregate, batters who swung more did worse than batters who swung less. However, there’s a considerable outcomes vs. approach component here. The players in the bottom quintile—those who swung a lot less in 2015 than 2014—didn’t always have complete choice in the matter, as pitchers rationally chose to pitch more cautiously to hitters like Harper (percentage of pitches in the strike zone declined from 45.0% in 2014 to 41.5% in 2015) and Eric Hosmer (42.7% to 41.1%). But others in that lowest quintile, including Manny Machado, Curtis Granderson, and even A.J. Pierzynski, saw more pitches in the strike zone in 2015 than 2014, but chose to swing less, in and out of the zone, with improved results.

This project turned out to be murkier than I would’ve liked. Did batters who pulled a lot less, or those who it the ball on the ground a lot more, do better in 2015 than they did in 2014? Yes, but so did those who pulled a lot more and hit the ball in the air a lot more. And those are only aggregate figures; in every quintile, there are examples of batters who were a lot better or a lot worse. And we can’t completely tease out the change in approach from the change in a batter’s health or age or the way he’s pitched. About the only thing that seems to be safe to say is that swinging more is a dubious strategy. If a player goes into spring training talking about getting more aggressive at the plate and taking a lot more hacks, we might hope that his batting coach can talk him out of it.

First Blood, Retaliation, and Piling On
The 2016 Hall of Fame Pity Vote Candidates

Guest
Eric
You can flag a comment by clicking its flag icon. Website admin will know that you reported it. Admins may or may not choose to remove the comment or block the author. And please don't worry, your report will be anonymous.

“In aggregate, batters who swung more did worse than batters who swung less.” While I agree with you, I view it differently. My perspective is that batters that are better hitters naturally swing LESS because when they do swing, they make more contact with the baseball to begin with. The bat colliding with the baseball is more important than players who swing hard hoping the ball collides with the bat, if you get my drift. To that end, I created 3 new stats, HEWCO, CCR, and BSM. These stats completely replace batting AVErage, OBP, SLG, and OPS, in fact it… Read more »

Thanks for reading and commenting, Eric. I think I’m generally in agreement that baseball in the 1980s was more fun–I’m always concerned about selective memory, but man, I loved me some Henderson and Raines–but while strikeout rates are obviously a lot higher today, there have been fewer walks over the past ten years (8.2% of plate appearances) than in 1980-89 (8.5%). Royals notwithstanding–I’m not going to assume one team, one year is indicative of a trend–over the past ten years the correlation between scoring runs and drawing walks is +0.56, so walking more definitely does augment scoring. That’s a pretty… Read more »