Is Pitcher BABIP All Luck?

This article was originally published on Check Down Sports.

For those of you who have been reading baseball content at Check Down Sports semi-regularly, you’ve probably seen one of us talking about players and teams we think are performing at a level far from expected.

A lot of times when attempting to explain the reasoning behind abnormal pitching performance, we cite a few reasons, and then attribute the rest to good or bad luck. Luck we usually associate with a batter’s batting average on balls in play (BABIP), which is agreed upon by most as beyond the control of the pitcher.

The influx of ball-tracking systems in MLB has allowed for a boatload of new measurements that, until a few years ago, were only dreams in the minds of analysts and evaluators. One of those — the velocity of ball exiting the bat (exit velocity) — is a popular, yet informative piece of data.

Intuitively, it makes sense that the softer the ball leaves the bat, the less likely the ball should result in a hit. A pitcher who suppresses exit velocity should allow fewer batted balls to become base hits than a pitcher who gives up a high exit velocity. Yes, bloops and seeing-eye ground balls will find open space, but on average, I think this assumption makes sense.

But thanks to Statcast and baseballsavant.com, this assumption doesn’t have to be an assumption at all. We can test it out.

Baseball Savant has exit-velocity data since the beginning of 2015, so that’s where I started. I gathered average exit velocity against for pitchers with at least 190 batted-ball events in 2015 and 2016 (298 total). I then got the BABIP for those pitchers in those seasons from FanGraphs. Next, using STATA, I ran a simple linear regression with the two variables. Results are shown below. 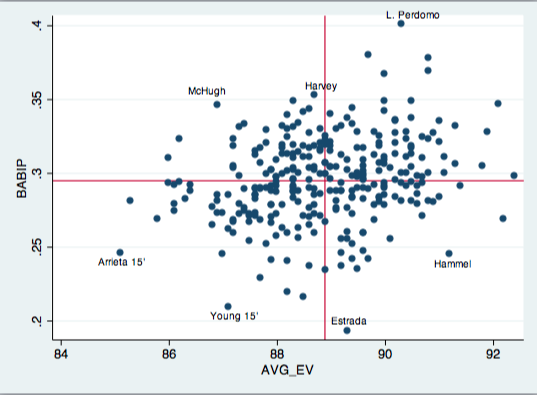 Playing Probability: Drew Pomeranz and Anderson Espinoza
Hardball Retrospective – What Might Have Been – The “Original” 1969 Reds
newest oldest most voted

Member
Mac
You can flag a comment by clicking its flag icon. Website admin will know that you reported it. Admins may or may not choose to remove the comment or block the author. And please don't worry, your report will be anonymous.

I dunno, that’s a pretty massively scattershot data. Reminds me of the infamous “bee flying through data” graph:
http://www.thejabberwock.org/blog/2/roubik2.gif

I’ll buy that some of the absolute worst BABIP’s match up with the hardest exit velocities, but I don’t see any grand trend here.