Is It Time to Rethink Hitter’s Counts?

Hitters have always lived by the idea that they will try and work the count in their favor to not only get closer to a walk, but to force the pitcher to be more predictable. Limit the pitcher down to just throwing you a fastball, and give yourself a better chance at guessing correctly. Pitchers do not want to walk people and will throw their fastball much more predictably as they fall down in the count.

Take Clayton Kershaw, for example. As Jeff Sullivan pointed out in an excellent piece, Kershaw is pretty strong against using his curveball in hitter’s counts. A pitch he throws roughly 17 percent of the time has been almost nonexistent in hitter’s counts. For any hitter, getting to a friendly count against Kershaw means he does not have to worry about seeing the curveball. Take a look at how he has used all of his pitches, by count, in 2017. 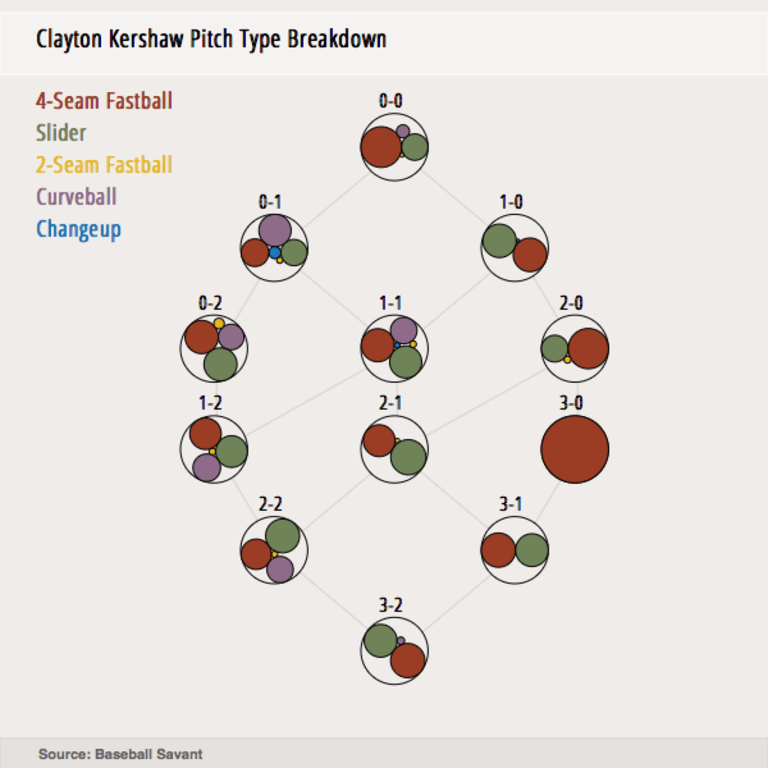 Get yourself in a hitter-friendly count and sit fastball. Of course, it is easier said than done to hit Kershaw, but it has led me to wonder whether it is right to keep throwing so many fastballs in counts where hitters are anticipating fastballs. 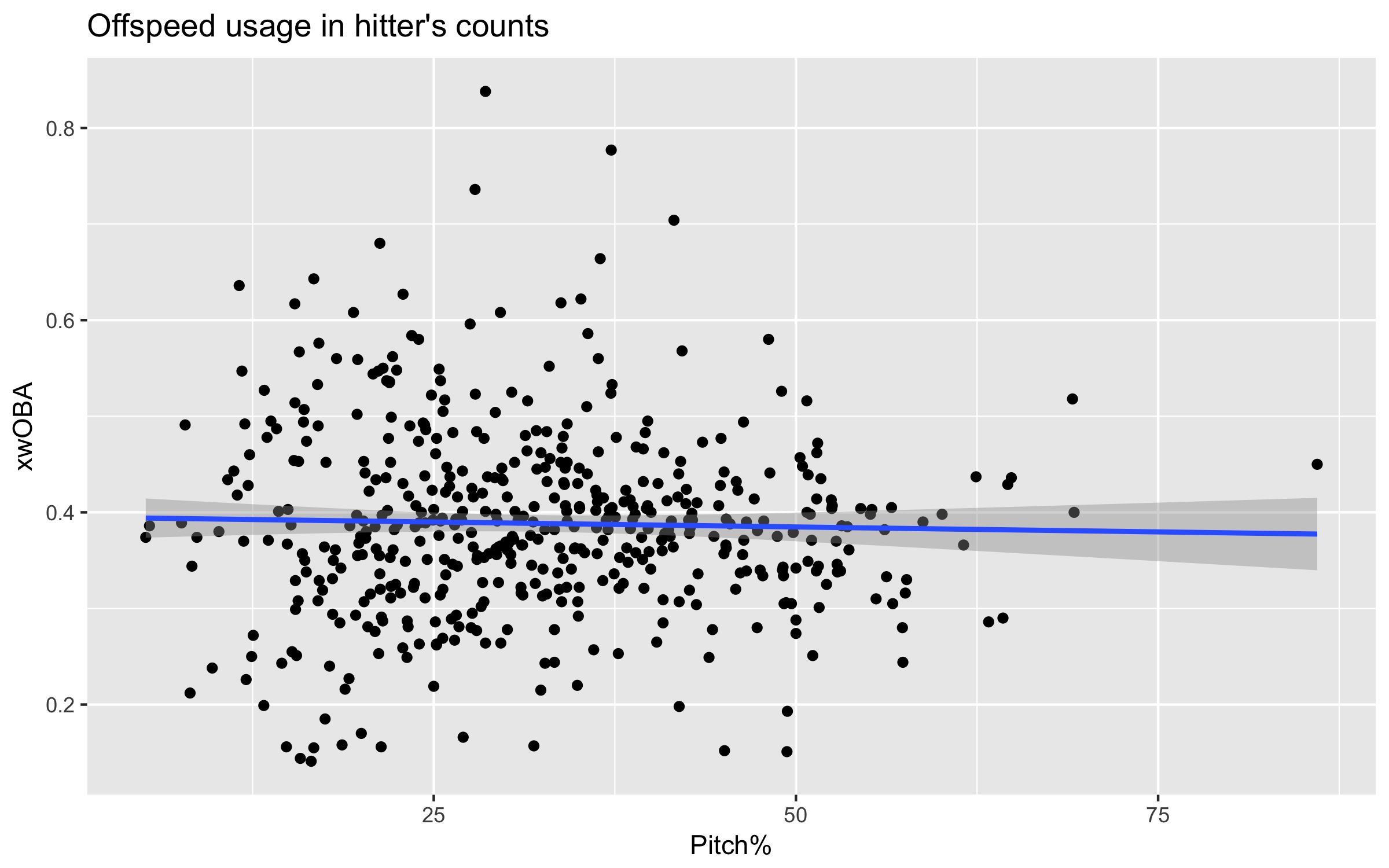 Nothing to really find here; a lot of randomness. What about fastball usage in hitter’s counts? 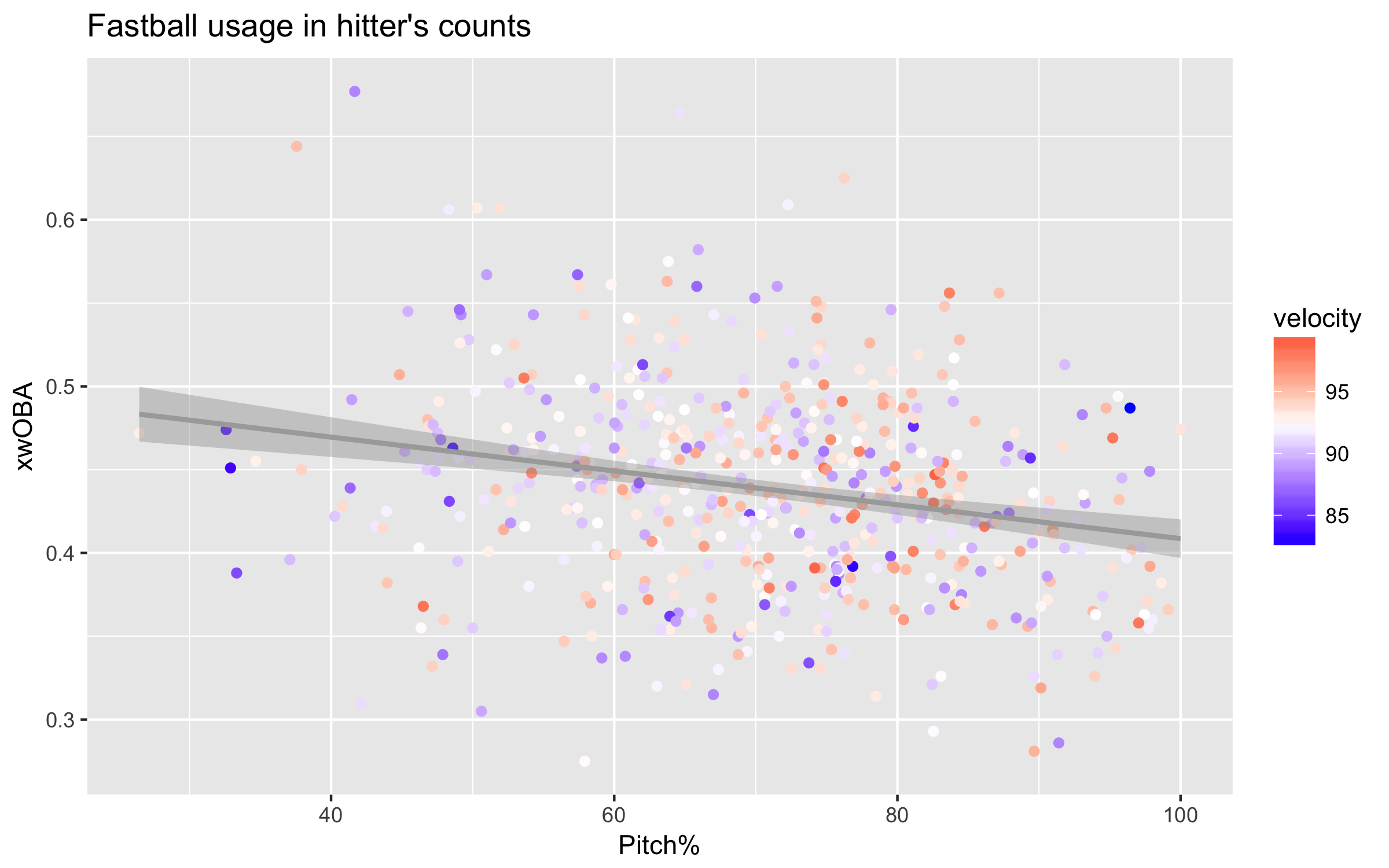 There is a small relationship here, but not too much to glean from this, even from the guys who have bigger (faster) fastballs.

But pay attention to the y-axis for both plots: the fastball group is centered higher than the off-speed group. It is not something small, either.

Much of the concern here, I am sure, revolves around the basis that pitchers throw fastballs in these counts because there is a significantly higher chance of throwing a strike with a fastball versus an off-speed pitch. Well, that simply is not the case.

We see only a six percent difference here. There is a lot that goes into guys throwing off-speed pitches for strikes, but this is something more negligible than I thought. Normally, you would think some players would not have this much control over off-speed pitches, but they are big-league pitchers. 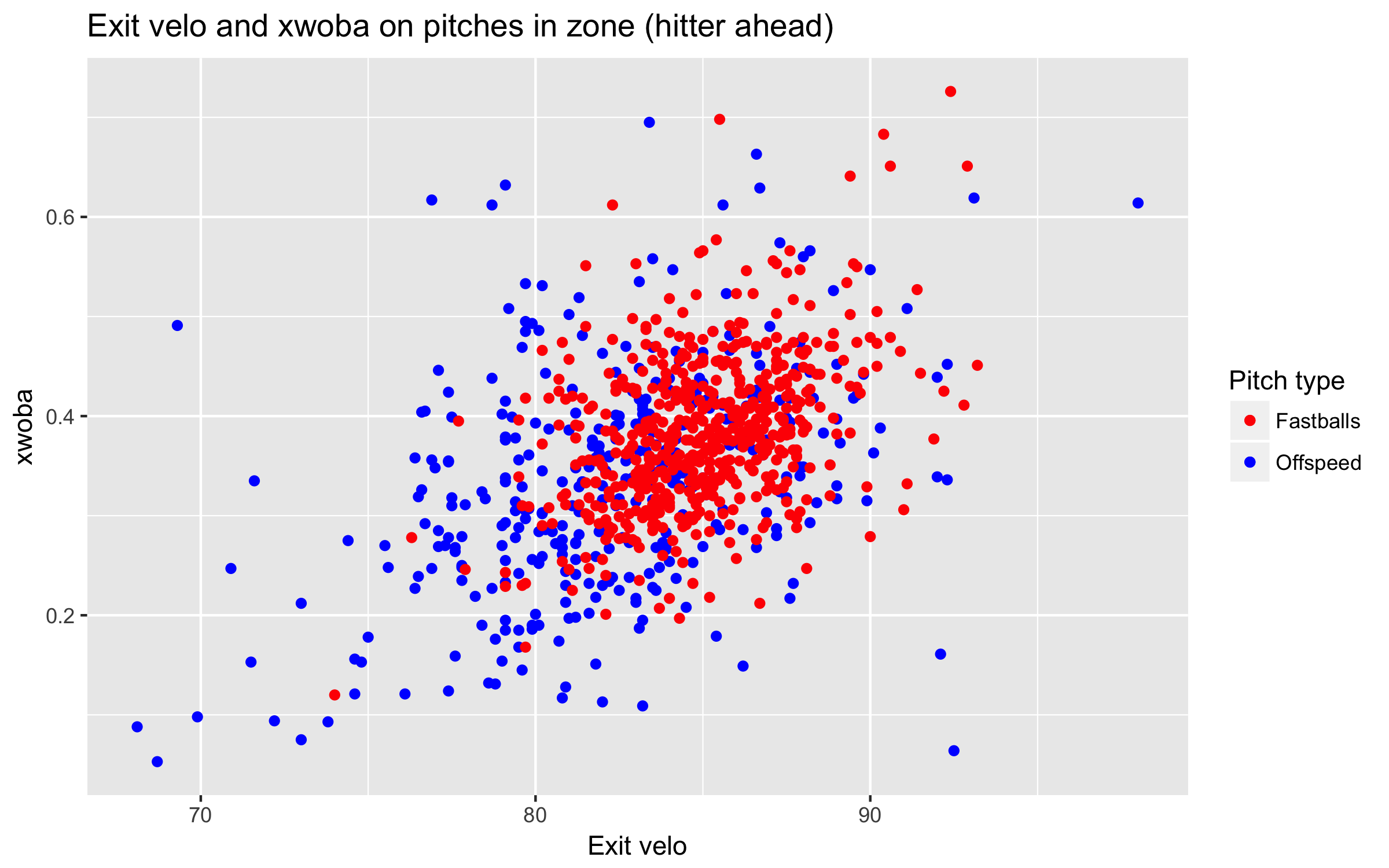 This is from the same two groupings of pitchers (min 50 off-speed and fastballs in hitter’s counts), so there is some overlap for some players. But, I hope you can see the off-speed grouping is centered a little more left than the fastball groupings. For these players, the average off-speed exit velocity was roughly two MPH lower than the average fastball exit velocity (82.4 vs 85 MPH). The league average sees a similar split as well (88.1 vs 90.7 MPH). To put this velocity gap in perspective, among the 387 pitchers who threw at least 750 pitches in 2017, the standard deviation of exit velocity was 1.56 mph.

One thing I have neglected so far is pitch location. Oftentimes, it’s hard enough for hitters to adjust and hit a pitch they weren’t expecting so I could be looking too closely at stuff. I had mentioned in my previous post that the exit velocities for offspeed pitches in these counts were lower than fastballs (roughly 2 MPH slower). To get a sense as to how pitchers have done this, it’s important to take a look as to where they’ve located these pitches. I started by sorting for batted balls hit 85 mph or less in hitter’s counts. 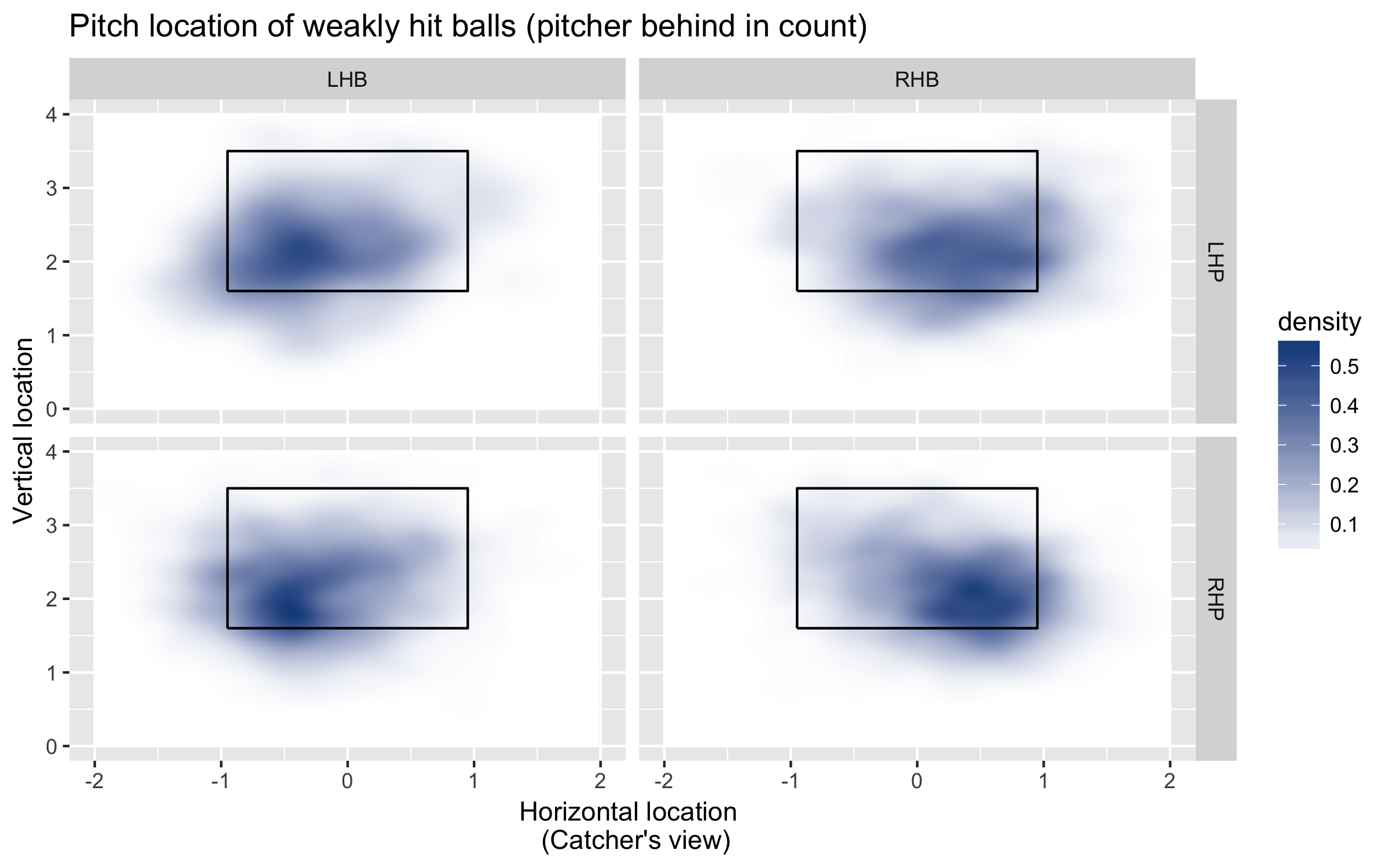 It’s important to note that both of the concentrated groupings are located in the zone. Most importantly, but not so surprisingly, the majority of these pitches come on the lower, outside part of the plate. However, to generate weak contact, you’d expect pitchers to be more fine in their location. This is still pretty dependent on fitting pitches on the lower third, but it’s getting weak contact on pitches in the zone.

The pitch groupings themselves are something sort of hazy or hard to really discern. To get a more definite look as to what damage is being done, it’s best to take a look at xwOBA by zone for the different pitcher-vs.-hitter matchup combos.

I’ll be talking about these different pitch zones as they are shown in PitchF/x and Baseball Savant data. 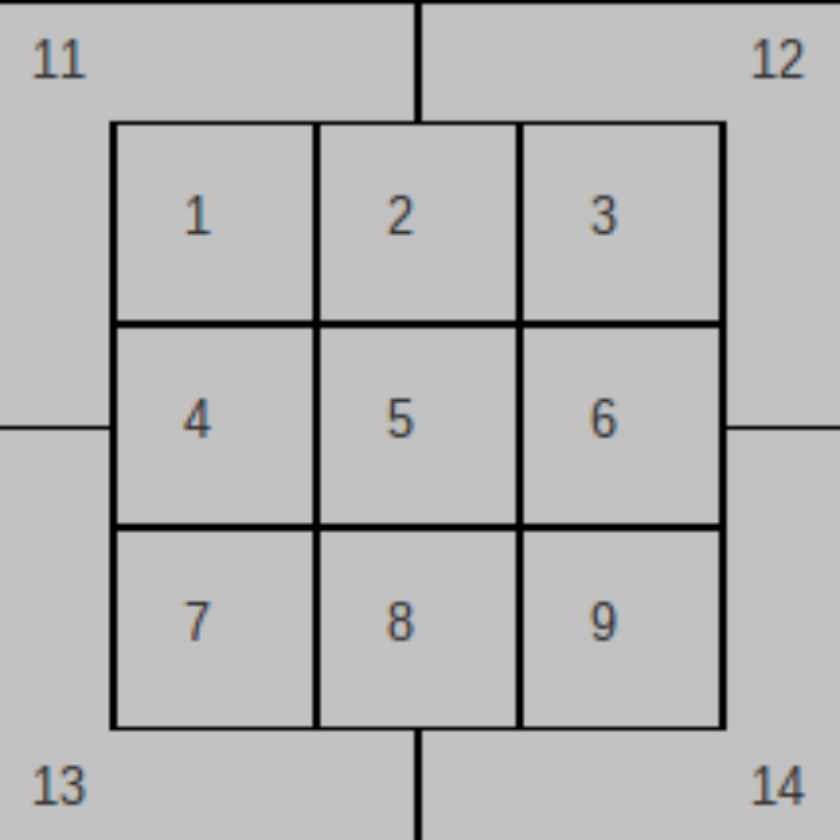 I apologize for not being able to present this information in a more palatable fashion but I hope you can see that it’s more than just throwing offspeed low and away. 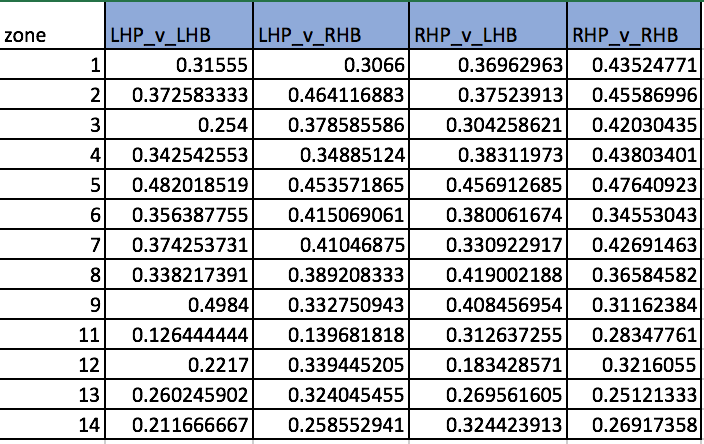 There’s a lot to digest in this. Depending on pitcher handedness, there are 50 and 80-point swings in xwOBA for pitches thrown in the same location. There are some issues with a lack of data, but only for the corner zones.

There are a few caveats to all of this. There was nothing direct about throwing more off-speed pitches in hitter’s counts that led to better results; there is a smaller sample of off-speed pitches thrown versus fastballs thrown in hitter’s counts, and sequencing is always an issue that is hard to build in. And maybe it is not fair to consider all counts where the hitter is ahead. 1-0 certainly is not the same as 3-0, but enough of the general convention still seems to be in place today. Even a pitcher like Clayton Kershaw becomes more predictable and narrows his arsenal after falling down 1-0.

But it is time for pitchers to expand their arsenals and use their off-speed pitches more often in hitter’s counts. The league as a whole is throwing offspeed pitches 29% of the time when down in the count, and that number has been gradually increasing season after season. Pitchers can certainly throw their off-speed pitches in the zone nearly as often as they can their fastballs, and to better results as well. Much of the hitter’s advantage when the count is in his favor is that he has a better idea as to what pitch is coming. Given the skill of MLB pitchers, it is an advantage that very well could be taken away to favorable results.

(all data via Baseball Savant)

Pitch Velocity and Injury: Is Throwing Less Hard Worth It?
Stars and Scrubs Forever

Owen is a contributor at FanGraphs. He got his start blogging about baseball when he was in college and you can find him maybe talking about something on Twitter @O_dotco.

Nice post. But couldn’t there be a selection bias in that only pitchers with plus command throw breakers in hitters counts while anyone throws fastballs.