How Much Value Is Really in the Farm System?

Everyone knows that a strong farm system is key to the long-term success of a major league organization. They make it possible for clubs to field competitive teams at affordable salaries and stay beneath the luxury tax threshold, but how much value can an organization truly expect from their farm system? How much more value do the best farm systems generate compared to the worst ones? I decided to take a closer look.

The first thing I did was gather the player information and rankings from the Baseball America’s Prospect Handbooks from 2001-14 and entered them into a database. I then found players’ total fWAR produced over the next six seasons, and I added them together to find the values that each farm system produced. I chose six seasons to ensure that teams wouldn’t get credit for a player’s non-team-controlled years, since the value produced would not be guaranteed for the player’s current organization. This method will reduce the total value produced by players that are further away from the majors, but the purpose of this analysis is to focus on the value of the entire farm system and not an individual player’s value over the course of their career.

Let’s look at the 2014 Minnesota Twins as an example. Below is a list of the thirty players that were ranked and the amount of WAR that each player has produced by season. 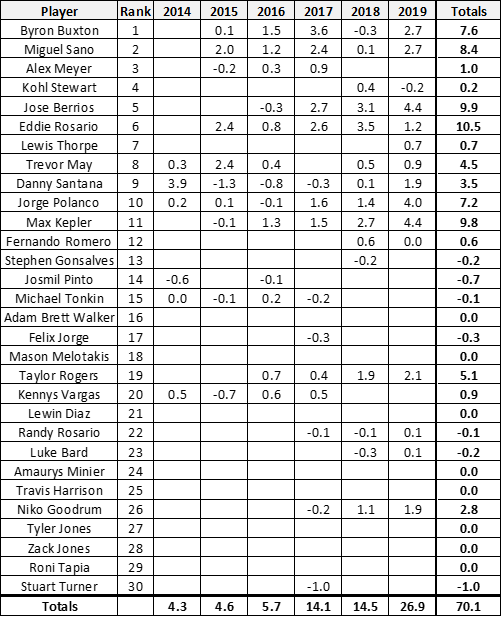 In this table, we can see that the 2014 Minnesota Twins farm system produced 70.1 WAR over six seasons, with 26.9 WAR coming in 2019. I repeated this process for every team to create my dataset.

The first thing I wanted to examine was how much total WAR an organization could expect from their farm. I calculated the average produced for each system to be 45.83 WAR over six seasons. I also discovered that the maximum WAR for a farm system was produced by the 2003 Cleveland Indians with a total of 136.0 WAR, and the minimum value came from the 2008 Seattle Mariners farm with a total of -1.7.

The next thing I wanted to examine was the distribution of WAR values. Do they follow a standard normal distribution or is something else going on? Below is a density plot of all 30 farm systems’ WAR over six seasons. 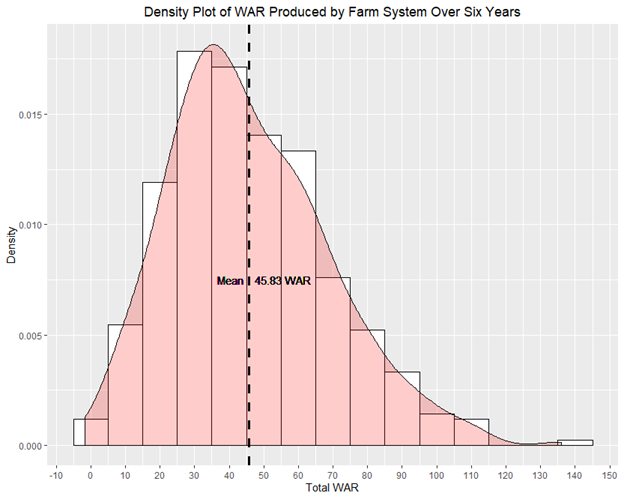 There is nothing too crazy going on here, but it looks like the distribution is positively skewed, with the 2003 Cleveland Indians an outlier at 23.6 WAR more than the next-highest organization. I am not surprised that the data is skewed, because if a player is doing well early in his career, he will continue to accumulate more playing time and WAR. However, if a player is not performing well, he is in danger of being sent down. This makes it difficult for the left tail to mirror the right tail distribution.

WAR Produced by Farm System in a Single Season

The amount of WAR generated over six seasons is a good way to show the overall production and general well-being of an organization’s farm system, but I believe it is just as important to see how much value an organization can generate in a single year. Producing 45.0 WAR over six years is the average, but how did you distribute them? If your farm system does not produce any value for the first five years, but it then somehow comes up with 45.0 WAR in year six, is that better than producing 7.5 WAR in six consecutive seasons? If you are the GM of a 100-loss club, you may prefer the boost of 45.0 WAR arriving in a single season, since adding just 7.5 WAR will probably not get you into the playoffs. If you are the GM of a contending team, you may want the slow drip instead since your team is already competing for a playoff spot every year. So how much WAR can you expect from a farm system in a single season? 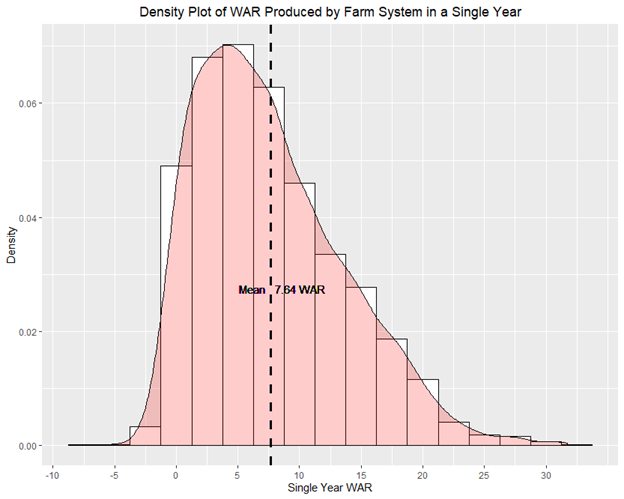 Once again, we see a positively skewed distribution, but there is something else that I would like to account for before moving forward. To create this visual, I compiled seasons one through six for each farm system and treated all seasons equally, but that may not be the best way to interpret the data. The next visual shows the distributions for each individual season in relation to the year of the organization’s ranking. In our 2014 Minnesota Twins example, the WAR produced in 2014 would be in the distribution labeled “Same Season.” The 2015 season would be in the distribution labeled “Second Season,” and so on and so forth to the “Sixth Season” distribution. 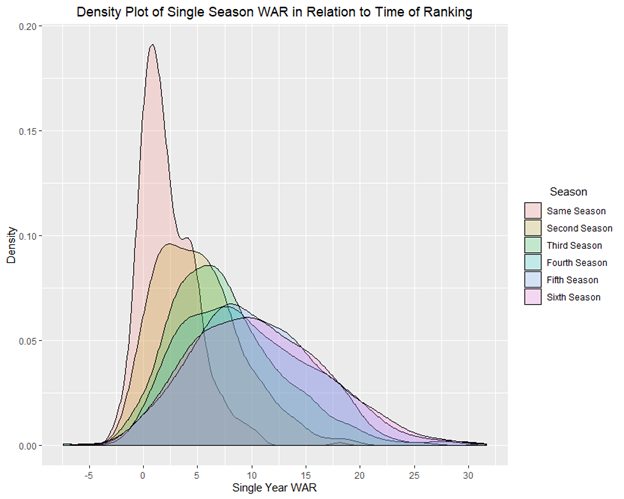 The visual shows us that we should not treat all seasons as equal. The first season distribution is vastly different from the others, with almost 20% of players hovering around 0.0 WAR produced in a season. The second and third season distributions are not as stark as the same season distribution, but these are not like the distributions for seasons four through six. This makes sense, since many of the prospects appearing in the Prospect Handbook are not perceived to be ready for the majors any time soon. I believe that it would be more beneficial for my individual season analysis to only look at seasons four through six to determine how much WAR a team can expect from its farm system. 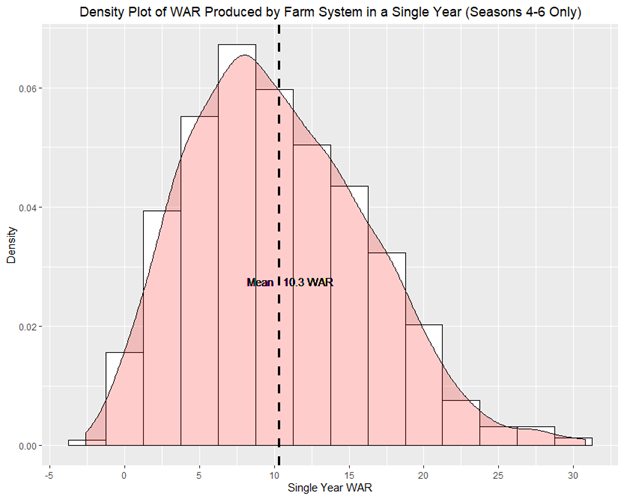 Without Seasons 1-3, the mean moves up to 10.3 WAR and the distribution appears a little less skewed. This is a decent way to look at the data, but it is only looking at one variable. How can we account for the different quality of farm systems? This is where Baseball America’s team rankings come into play.

Each season, Baseball America ranks the farm systems from 1-30. How much more valuable is a top-tier farm system compared to the bottom, or even an average system? The graphic below is an attempt to answer this question. 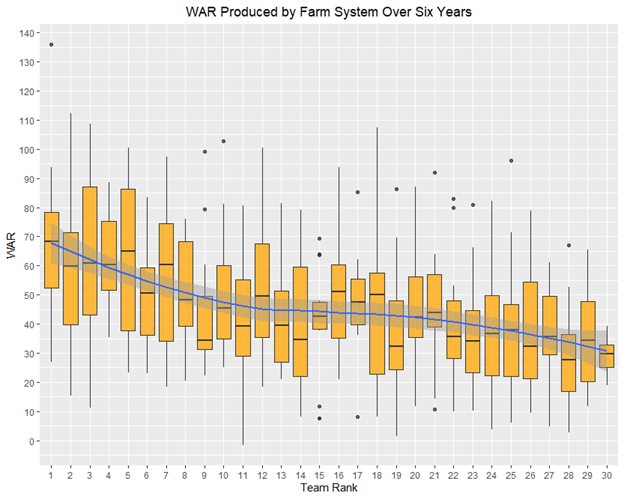 I also added a blue trend line to show the general relationship between team ranking and WAR. It looks like the trend line for the first 10 spots is steeper than the rest of the rankings. This means that moving from the 10th-ranked system to the first has a much larger impact on WAR than moving from the 20th to the 10th.

Once again, I thought it would be interesting to look at single-season WAR produced by a farm system. I excluded seasons one through three for the same reasons mentioned earlier. Below is the same box plot chart, but for individual season WAR instead of WAR produced over six seasons. 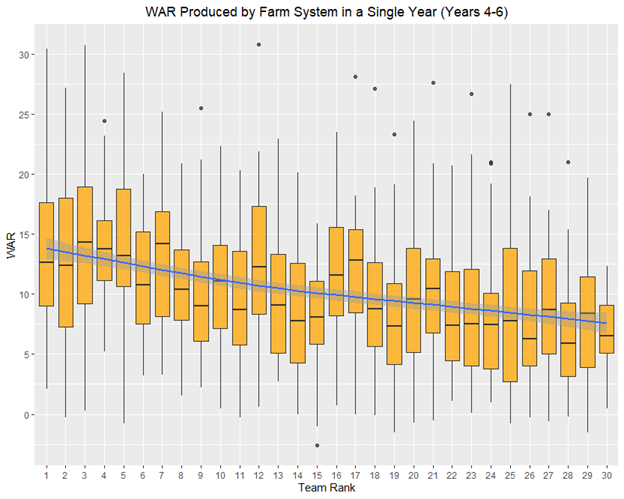 The blue line shows the downward trend lower in the rankings, but it also appears that the trend line is more linear than the one in the previous chart. I am not sure why this is happening, but I do find it interesting that a single season of WAR is relatively linear, but six seasons of WAR is not.

All the player information was obtained from Baseball America Prospect Handbooks and all the WAR figures were obtained from FanGraphs.com.

Challenging WAR and Other Statistics as Era-Adjustment Tools
How Possible Is a Five-Homer Game?
5 Comments
Oldest
Newest Most Voted
Inline Feedbacks
View all comments
tbhbeary

Down the line, another post should be something like “Old, larger minor league system vs new, smaller minor league system”. It will be interesting to see how prospect development is different and how it affects it. I think it will be a pretty big change. Newer players will have to immediately adapt to a higher playing level, which will help them in the long run, as they will know that they have to always adapt to a higher level of play; stagnation is bad.

Great analysis and article.
It would be great if you could relabel the box-chart graphs on the X axis- instead of case # 1-30, it would be awesome to see the team names

The x-axis is made up by team rank for the upcoming season, so there are multiple teams in each ranking. I could have and probably should have included the entire WAR summation by year and team in the article though.

Or I could look at each franchise’s total. Lots of avenues for further analysis.

It would be fascinating to see the WAR distributions bifurcated between pitching and offensive skill sets too.