In a 2019 season that has started with so many bullpens struggling (and yes, Craig Kimbrel still unemployed to this date), we still have relievers that have been brilliant thus far, some of them more surprising than others. That category of the surprising includes our guy, Luke Jackson.

Jackson, a 27-year-old righty from Fort Lauderdale, is in his third season with the Braves. He might go unnoticed if: a) one does not watch Atlanta much or b) one only looks at the current leaderboards in most metrics. By traditional stats, for example, he barely cracks the top 100 relievers in ERA (a three-run ninth on Tuesday in San Francisco took him away from the top 50) and is well below Kirby Yates’ 20 saves. As we move to advanced metrics, we see him climb higher, though still far from the leaders. His 2.24 xFIP ranks him eighth in the big leagues but well below Josh Hader’s 1.59 that currently leads the NL. While we are still early in the season and a few bad outings could hamper his (or any reliever’s) numbers, Jackson deserves to be looked at, mostly because he is changing Braves fans’ opinion from “this guy again?” to a growing sensation of security when he comes up to pitch. And that has not gone unnoticed for Brian Snitker, to whom he has now become the closer and the guy who handles most of high-leverage situations.

After a spring training that included two awful outings against the Astros and Red Sox, Jackson cracked the Opening Day roster and saw action on March 28th, on the first game of an opening series that was a catastrophe for the Braves, and especially for the bullpen. He entered to pitch the 6th inning with Atlanta trailing Philadelphia 6-3, and less than twenty pitches later, the game was as good as lost. A walk and a throwing error of his own set up the frame. The Braves intentionally walked Bryce Harper, and behind him, Rhys Hoskins hit a grand slam that put the final nail in the coffin. Twenty-two appearances later, the only extra bases he has allowed are a homer by David Peralta (who has been mashing against the Braves) and three doubles, and most importantly, he has allowed only five runs, three of them in that blown save earlier this week. Despite that, he holds a 1.80 ERA if we take out his horrid season debut.

Why so much attention on a pitcher that so far has shown nothing else than a great start to the season after more than 100 career innings of subpar pitching? Because this season is the best he has had since his debut in the big leagues with the Texas Rangers back in 2015, and this stretch (which included 14 appearances without allowing a run) already accounts for hist best one in The Show. Thus, it sure would be nice to (at least try to) analyze why.

If we look back at his tenure with Texas, Jackson did not throw a slider in his first year, and when he started doing so in 2016, he still relied heavily on his four-seam fastball. However, his slider percentage rose when he joined the Braves, and, as you can see below, it has now exceeded his fastball usage. 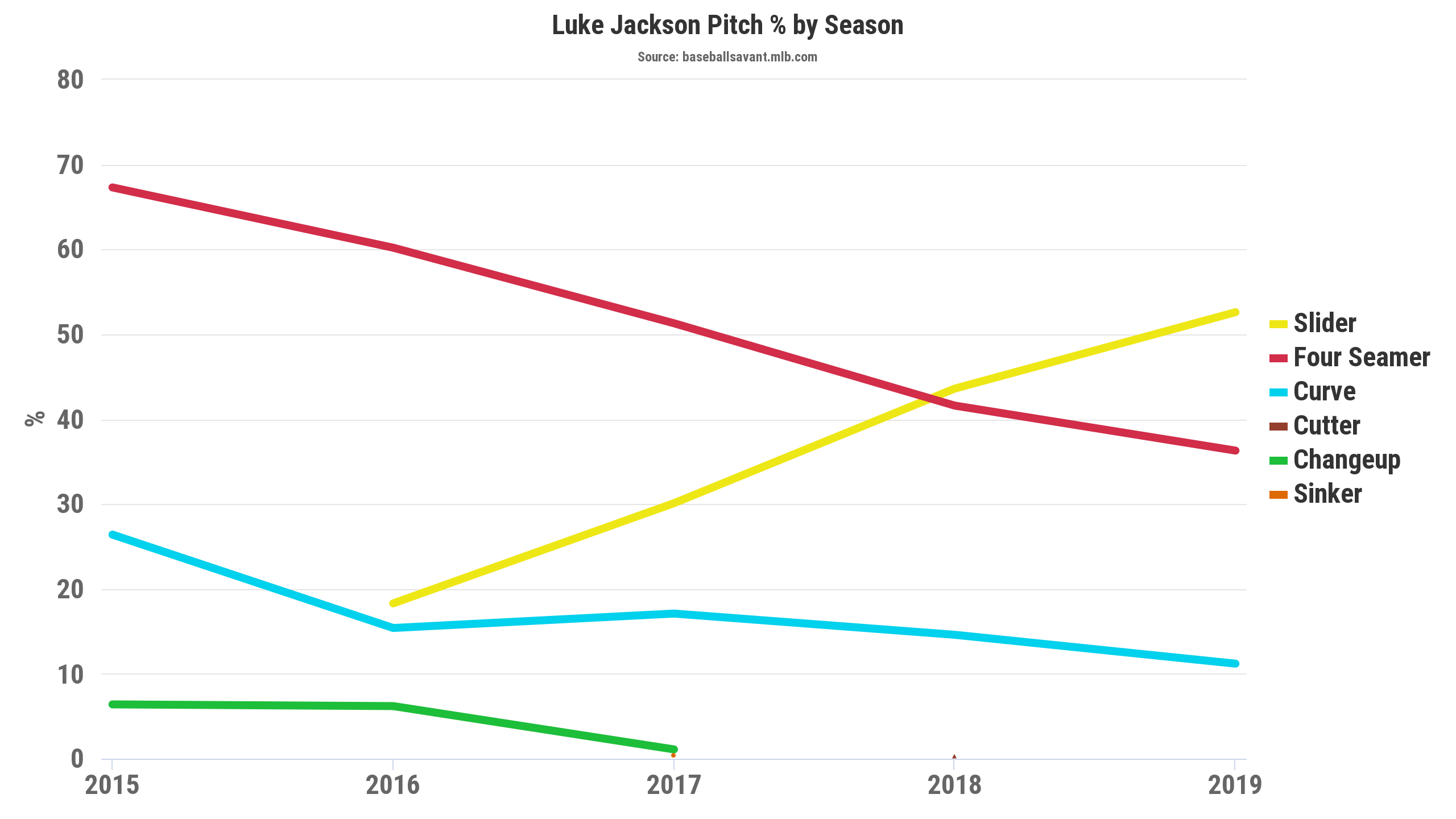 These numbers give us a hint on the reasons for Jackson’s improvement. He has relied on the slider earlier in the count and has been getting more whiffs (34.7% this season compared to 32.9% last year). On top of that, 26 out of 34 strikeouts have come with the slider. After running into this, I decided to see if there has been any true change or if this was plain luck.

Interestingly enough, I found an increasing difference in release point. The change has been building ever since 2017, bringing Jackson lower and with his arm slightly pointing towards third base, and now his delivery is noticeably different. I have picked two pitches (2018 and 2019, click to see the video of each) in Miami to have the camera as identical as possible. 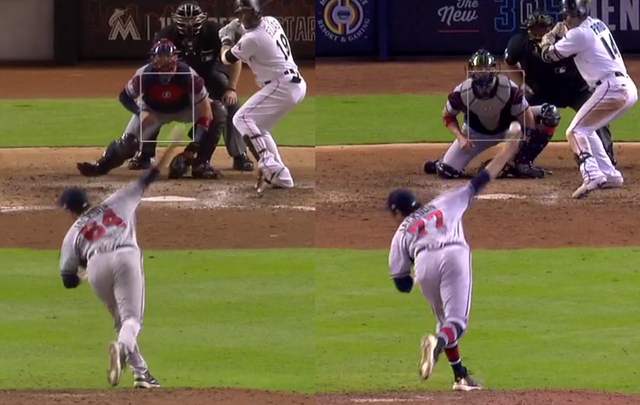 This is Jackson pitching a slider away, both for swinging strikes. On the left, in 2018. On the right, a few weeks ago.

Let’s take a look at the consequences of this change. Jackson’s spin rate is on the rise for the second year in a row, and hand-in-hand with that increase, he is pitching a little bit harder entering 2019. Those changes have combined for two seasons, and the results in velocity and spin moving gradually with those adjustments do not seem casual.

To recapitulate, the former Texas Ranger is now averaging 88 mph and 2490 rpm (2534 during May, a trend that it is yet to be seen if it will continue) in his slider and is using the pitch 52.6% of the time. In an attempt to see what these changes could be bring to the table in the long run, a comparison has been established with guys that have similar sliders (regarding speed and spin rate) and have used it in similar fashion from 2015 to 2018 (I have excluded 2019 as I wanted to compare to a full season of workload). For that task, I went (once again) into Baseball Savant and ran the following filters:

This leaves us two pitchers: 2015 Nick Vincent and 2017 Anthony Swarzak.

After a slightly below average season the year before, Vincent, then a San Diego Padre, split his 2015 between Triple-A El Paso and the big club. In 23 innings, he finished with a 2.35 ERA and a 2.53 FIP, with a 22/10 K/BB ratio. However, those numbers seem deceiving, as the 219 sliders he threw were good for only a 16.1% whiff rate. With his slider averaging 87 mph and his fastball sitting in the low 90s, it seems logical to believe that that certainly did not help him out.

Yep, new Atlanta Brave Anthony Swarzak. Originally only a guy to compare Jackson too, he may now become an interesting case himself. After a not-so-good 2016 while with the Yankees, Swarzak signed a contract with the White Sox for the 2017 season. To this day, this season remains his best and is the reason that he has landed nice contracts in 2018 and 2019. It can also be said that most of his success came with (and because of) his slider. A two-pitch pitcher, the slider had a 35.6% whiff rate and is deployed mostly as a set-up pitch for his four-seamer, and it helped him rack 91 strikeouts in 77.1 innings pitched. With a .305 wOBA and a .415 slugging percentage, the slider paved the way for his fastball to do the rest. For his fantastic effort, Milwaukee traded for the righty to add help to their bullpen during their postseason race. He remained dominant after moving to the National League, as he finished the season with an ERA- of 54 and a 2.74 FIP. However, a bad outing at Busch Stadium on the second-to-last day of the season ended the Brewers’ postseason hopes.

There is one more thing must be said about Swarzak. His 2017 pitch usage was nearly identical to that of the year before, but it was a spike in spin rate (2456 compared to 2391) what got him a place in this comparison. And, surprisingly enough, after having his best season, in 2018 he reverted the tendency and started using his fastball more, and that season he was a mess, although it would not be fair to declare pitch usage fully responsible for it.

I have decided to focus on Swarzak and leave Vincent aside, basically because the former pitched the whole season in the big leagues. A few promising similarities were found with Jackson. For starters, Jackson’s velocity averages are 95.8 mph for his fastball and 88 mph for his slider, numbers that bear an uncanny resemblance to Swarzak’s 94.7 and 87.1, respectively, in 2017. Even more striking is that Swarzak and Jackson have similar spin rates on their sliders (remember, that’s how we first got to compare them), with Jackson’s 2490 and the aforementioned 2456 for Swarzak. A difference we see is that while the latter used his slider mostly from the middle out, Jackson throws it mostly down and slightly in.

Comparing their fastballs, we see that Jackson has a 24.2% whiff rate compared to the 26.5% that the former White Sox had in 2017. A big change in this is that when I first started digging in Statcast, that percentage was 16.1, leading me to believe that Jackson would probably be better off throwing his four-seamer down in the zone as he had been doing instead of trying to overpower hitters by dialing his fastball up in the zone on a regular basis. However, he is now mixing up the fastball as a put-away pitch with increasing success. Up until now, Jackson holds a 72.3% ground-ball rate for the season that ranks him second to Zack Britton’s 74.6%. Even though it might regress, it surely shows a path to follow, as he is pitching in front of a Braves infield that should thrive on defense. Finally, Baseball Savant gives us one more thing that can make us think of both pitchers as similar (click for full size).

Of course, it is early to talk about whether Jackson is for real or to say the Braves might have found a much-needed versatile and reliable reliever for the long run, but there seems to be reasons to hope. And without a doubt, Atlanta Braves fans, who are aching when seeing Kimbrel still on the market, need to find a hope to grab onto. On top of that, it will be interesting to watch Swarzak’s tenure with the Braves and if he follows Luke Jackson’s path.

Franmil Reyes Is Being the Beast Who Was Promised
Do Higher Signing Bonuses Help Players Advance?