Sir Isaac Newton’s second law of gravity tells us exactly how much an object will accelerate based on the given net force.

For baseball hitters, this is directly applicable considering the goal to hit baseballs as hard and far as possible. And when it comes to generating net force against baseballs, Mike Trout is an expert. He has been crushing baseballs with the league’s elite since he became a full-time regular at age 20 in 2012. Trout’s offensive production, in particular, has gone to another level over the course of his career. The following table breaks up his career into two distinct parts. The numbers show Trout’s production compared to league average, with a mark of 100 denoting exactly average.

A Tale of Two Trouts

Trout has always produced elite offensive numbers, but he’s at an entirely different level now. He has transformed into baseball’s best hitter by walking more, striking out less, and pulling more hard-hit baseballs in the air. Trout is both barreling up more baseballs and raising the launch angle of his batted balls. Unsurprisingly, he had baseball’s second-best sweet-spot percentage in 2019. Trout has talked about a gap-to-gap approach in the past but recent trends show him moving away from hitting balls the other way.

During this transformation, Trout’s swing has also undergone some changes. He’s always possessed uncanny traits at the plate, whether it’s his lightning-quick hands, superb balance, or ability to handle multiple pitches and locations. But Trout has improved his stance to the point where there are no real flaws in his swing. To get a gauge on just how perfect it is, I decided to break it down in multiple parts. I looked into all of the parts of his swing, including his stance, stride, rotation, and extension.

To follow Trout’s step-by-step navigation towards hitting a baseball, I’ll utilize this nifty graphic from Elite Baseball Performance. This model will help us walk through every step for successful hitting. 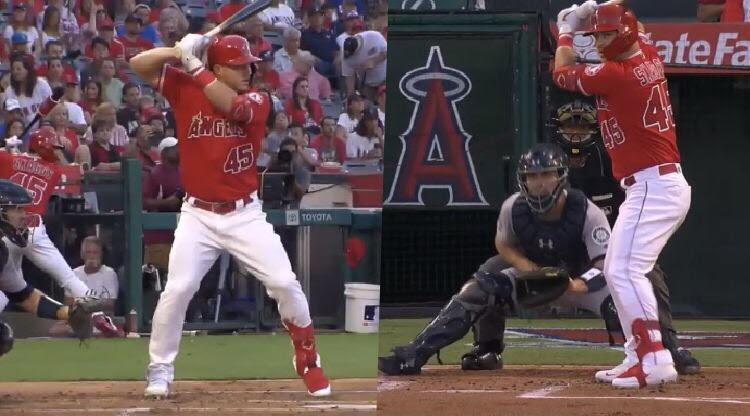 This is where everything starts. While some hitters can deviate from the norm, almost all elite hitters begin in an athletic position. Trout’s legs are balanced, with a strong back leg and a front leg that’s ready for a leg kick. His hands are positioned to cock back and begin his swing path. There is no wasted movement that may get Trout out of his rhythm. Trout’s location is also important. He’s at the very back of the box and standing right on top of home plate. He’s able to do this because of his strong mechanics which allows him to cover a ton of different pitches and locations.

This is possibly the most important part of the swing. Notice how balanced everything is, whether it’s his legs, hands, head, or weight transfer. Trout incorporates a big leg kick without sacrificing his balance. He doesn’t fall into his back leg, which can zap the rhythm and power needed for the next phase. His hands cock back with the knob of the bat pointed towards the catcher. This is a simple move that gets his hands ready for the ideal launch into his swing path. His head doesn’t move and is centered with his body throughout this whole process. As a result, Trout is not only balanced, but he has started generating the power necessary to launch into the next phase.

The prior balanced movements have carried over into this phase. Trout continues to show a strong balance on his back leg even when his front leg comes forward. As that happens, his hands continue to stay back. These opposite movements create what is known as the rubber band effect, a phrase you’re probably familiar with. Trout is literally stretching his front leg and hands in different directions, creating said effect. This creates the power necessary to begin the path towards bringing the bat to the ball. Josh Donaldson explains this concept perfectly in a fascinating tutorial he did back in 2015.

The first thing to notice is his front leg. Phase 4 talks about the front foot pushing down and out, which has several benefits. It not only allows the hips to come through but it also stops the back knee, which helps generate more power. Trout is fully prepared to deliver a powerful swing on this ball. 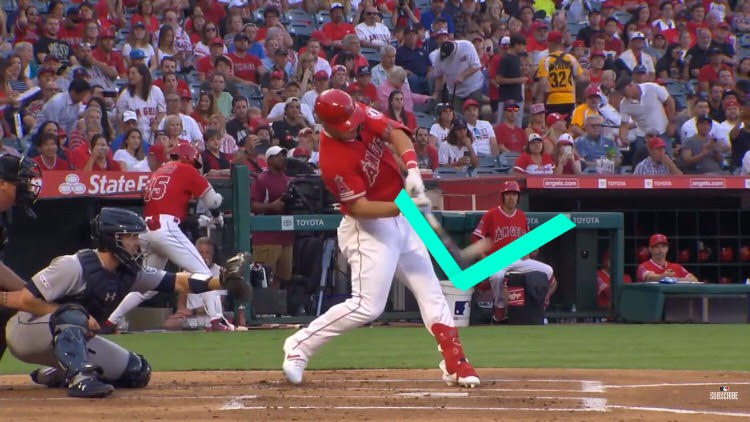 It’s fun to see Trout’s swing in different parts and then watch the final product. Everything about this swing just looks right. He’s in athletic positions the entire time. His balance is nearly perfect in his legs. The hand-load/leg-kick creates the optimal rubber band effect. He brings his hands in tight and at the optimal angle to meet the pitch. He gets the pitch out in front of home plate with the necessary bat path to drill this baseball. Finally, he finishes the swing with strong follow-through. As a result, this baseball left the bat at 111 mph and traveled 454 feet.

What makes Trout so dangerous is his ability to keep his strong mechanics in place against other pitches. He has always mashed against pitches low in the zone, but he’s now fixed his previous weakness against elevated heaters. In 2019, Trout had a .450 wOBA against fastballs, a .416 wOBA against breaking balls, and a .500 wOBA against offspeed pitches. There’s also no real place to pitch to Trout anymore, as evidenced by his 2019 zone charts.

Check out some examples of Trout’s ability to keep his mechanics in check, regardless of the pitch type and location.

Trout is baseball’s best hitter thanks in no small part to his flawless swing. It has continuously improved and turned him into a near-perfect hitter. Hopefully we will get to see this swing back in action sooner rather than later.

All gifs courtesy of MLB. Special thanks to Baseball Savant and FanGraphs for the information and Elite Baseball Performance for the graphic. This piece originally ran at Crashing The Pearly Gates.