Are Players Learning to Cut Their Strikeout Rate?

However, while looking at the leaderboards, it appeared to me that there were some quite spectacular K-rate improvers this year, most notably Matt Chapman and Cody Bellinger. This leads to two questions:

1. Is there an increase in players improving their strikeout rate?
2. Do those improvements stick?

I looked at guys who improved at least five points in strikeout rate in April 2019 vs. 2018. 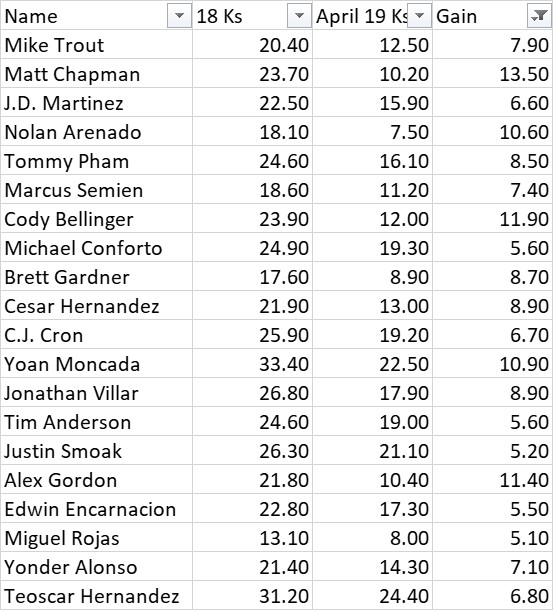 There have been 20 hitters that have improved five or more points, with five guys improving by more than 10. 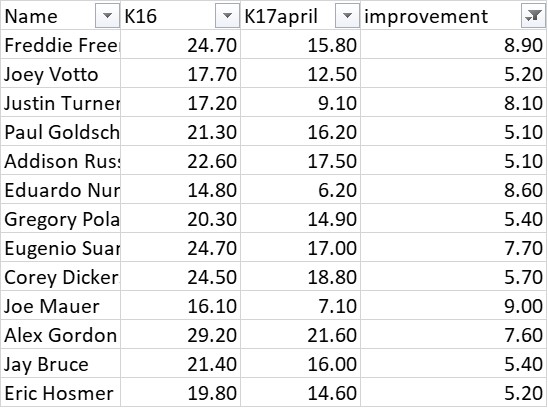 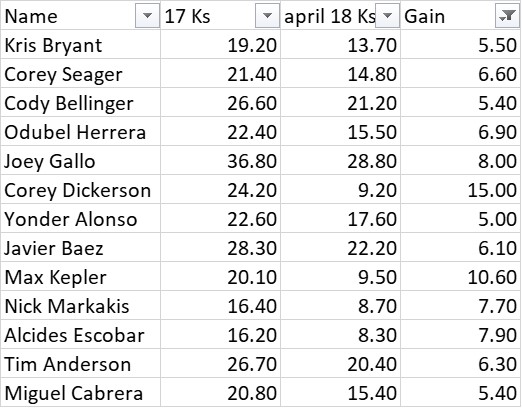 There might indeed be a small group figuring things out, although of course this could also still be statistical noise at this point.

Strikeout rate and the hit tool in general is not an easy thing to improve. Since data-driven coaches came into the game, the focus initially was mostly on power increase either via traditional methods like lifting weights and gaining weights, swing changes, or the modern bat-speed programs like overload and underload bats at Driveline.

These methods can increase power, but increasing contact seems to be a more difficult thing.

Increasing contact is a very valuable thing. While there is no direct correlation between contact rate and performance, this is mostly because contact is somewhat negatively correlated with power. Given the same power, usually the player who strikes out less performs better. I found out a pretty direct correlation between ISO, K-rate and walk rate.

Because of that, a goal of player development should be to increase contact without creating weak slap hitters, especially when development of launch angle and bat speed reach human limits. This is important because sacrificing power for more contact is not a winning strategy. The Cubs did that successfully in 2016, as well as the 2017 Astros, although of course some of that is player acquisition and not just development. The Cardinals Cardinals also mentioned that they plan to improve contact with their new Astros hitting coach Jeff Albert.

The juiced ball and swings optimized for maximizing raw power probably mean that you can hit homers without totally selling out. Contrary to popular belief, I could only find a small negative effect of launch angle on contact rate. Eno Sarris later found something similar, in that there is an effect but it is quite small.

While modern hitter development has mostly focused on bat speed, strength, and bat path optimization to increase power, there are now also tools to improve contact rate. One of those things is vision training. There were already experiments on vision training in the 1990s. Edgar Martinez used to bunt tennis balls thrown at 120 mph to improve his pitch tracking and hand-eye coordination. Studies showed that most of the data gained is from the first half of the pitch flight, as the batter is basically blind the last couple feet and extrapolates the remaining ball flight path in his brain.

Hitters can use that to their advantage. For example, Carlos Santana has said he imagines a circle in the air halfway home, and if it passes the circle, this is his swing trigger. It has worked for him of course, as his plate discipline has been top-of-the-charts elite in the past five years.

Some modern vision training tools are now software-based. For example, the uhit app and the offerings by Peter Fatse, who now works for the Twins. These software options show a pitch from the hitter’s perspective, and the batters have to judge it before it crosses home plate. I have experimented with the uhit app and it is quite tough, but over time you learn the angle balls come out of the hand. A too-high pitch will come out of the hand horizontally and a too-low pitch will shoot down too steep. You can also see a curve slightly popping up out of the hand. How this translates to games needs to be seen of course.

Another more traditional training is focus training with a stick and small balls. For example, Robinson Cano said he would hit beans with a stick to improve his focus and barrel accuracy as a kid. Perry Husband has adapted that training by throwing plastic golf balls from 18-20 feet at a relatively firm pace.

Game speed and overspeed training is another way of improving bat-to-ball skills against elite pitching. Traditionally, batting practice consists of a pitching throwing 65-70 mph from about 45-50 feet to make the batter comfortable and find his groove. However, in the past 2-3 years, game-realistic training became more popular, as the goal now was to make the athlete fail in training to make him tougher against elite pitching rather than grooving easy swings. Barry Bonds already did that in the 90s, setting a machine at high-80s and continuing to walk a step toward the machine until he couldn’t make contact anymore. Driveline has for example started to do live at-bats in the cage. They have a practice they call short box, in which a pitcher throws at sub-max intensity (high 70s to 80) from 50 feet, including breaking balls. High-speed machines are another way of training this, as some of them are programmable and can even replicate spin rates of opposing pitchers.

From 2016 to 2017, 43% of the gains had been retained on average. Five of the 13 hitters retained five or more points, but five players also basically lost all of the gains (one point or less retained) while three hitters were in the middle.

From 2017 to 2018, three players retained more than five points of improvement, while three lost all of it and the rest were in between and retained some. 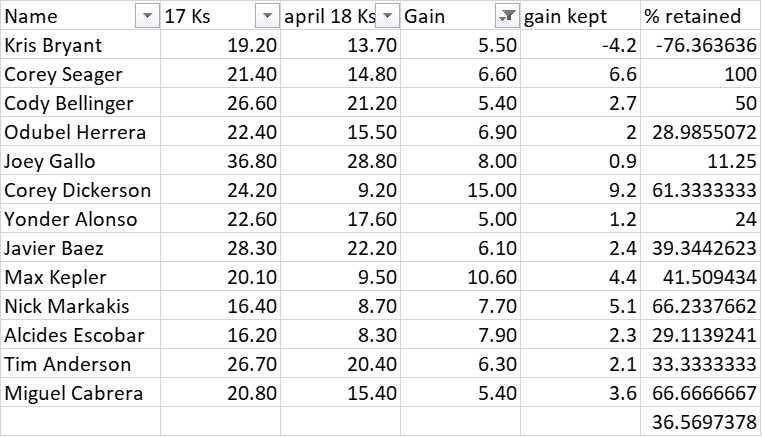 There is some retention but it is split. Basically one third lose all of the gains, one third keep almost all of it, and one third keeps about 30-50%. We have yet to see what will happen in 2019.

Is player development starting to figure out the strikeout problem? If it is, it is a small group, as the general trend is still towards strikeouts going up. Maybe there is no significant effect at all, but there is hope that player development can solve the “K problem.” Personally, I don’t have a huge issue with strikeouts and don’t want to see 1980s slap-hitting, but a high-power, low-to-medium K style like prime Miggy, Pujols, or now Jose Ramirez is probably ideal for the fans to watch.

We can monitor this closely to see if there is an increase of contact gainers in the next few years. If so, it could be a sign that something has been figured out. I’m especially interested if Trout, Bellinger, and Chapman keep their K-rate gains, as they were already elite players before and could be monsters with a sub-15% K-rate. Bellinger seems to be quite real for example, as this is the third year in a row he is improving his contact. Kris Bryant has been doing that too, albeit with less success because he lost power at the same time, which is not necessarily related considering he was also hurt, but it is still worrisome.

Good post! Do you know of any comparative data on swing angles? I know that LA isn’t entirely driven by swing angle, but it sure looks to me that the average swing angle has increased a lot in the last 10 years. And steeper swings obviously yield a worse contact rate.

It would be interesting to see both individual and group K% changes plotted against changes in swing angle. I just don’t know if the data exist.

Sure very steep attack angles close to or over 20 degrees might decrease contact. Hard to know because we don’t really have AA data, just reverse engineered ones that might not be reliable (attempts to reverse engineer swing speed a couple years ago weren’t great.

Swing sensors measure AA but they aren’t allowed for mlb games and spring training data with it aren’t public.

Zepp said attack angle should be between 5 and around 15 degrees with contact hitters being more at the lower range and power hitters going closer to 15 degrees.

I’m not sure if that has real game relevance though. In theory AAs of around 7-10 degrees are ideal for contact as they match the pitch plane but in practice there are more factors like bat vertical angle, swing direction and other stuff.

I think that LA doesn’t have a big correlation with k rate might be an indicator that AA isn’t a huge factor because AA and LA are different but somewhat correlated.

But we can’t know for sure right now.