A Metric for Home-Plate Umpire Consistency

When calling balls and strikes, consistency matters. As long as an umpire always calls borderline pitches the same way within a game, players seem to accept variations from the rule book strike zone. While there have been many excellent analyses of umpire accuracy, these studies tend to focus on conformity to a fixed zone, rather than on the dependability of those calls.

Disgruntled fans can turn to Brooks Baseball’s strike zone plots when they feel an umpire has had a bad game against their team. For example, the following zone map seems egregiously bad: 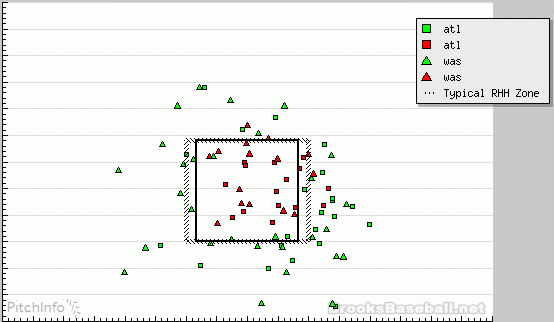 The calls seem very capricious, especially on the outside (right) of the zone. Balls (in green) are found in the same locations as strikes (in red), and some called strikes landed much further outside than pitches that were called balls.

On the other hand, the zone map below appears fairly consistent: 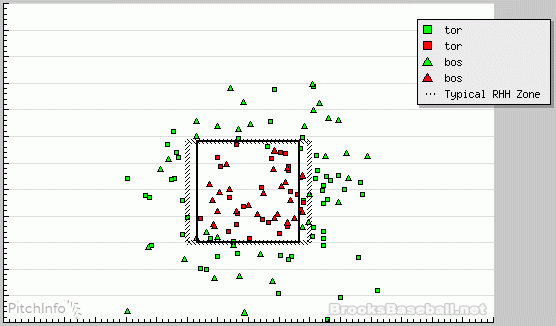 One might quibble with a couple of the outside calls, but the called strikes, for the most part, are contained within a ring of balls. Notice also that pitches in the lower-inside corner were consistently called balls. While this umpire didn’t establish a perfectly rectangular zone, he did establish a consistent zone; neither pitcher got those calls on the inside corner, and hitters on both teams generally knew what to expect.

In this post, I will propose a metric for assessing the inconsistency of an umpire’s strike zone. This metric does not assess how well the umpire conformed to the rule-book zone or the consensus MLB zone. Rather, it uses some tools from computational geometry to compare the overall shape formed by called strikes with the shape formed by the called balls.

Data from MLB Advanced Media describes each pitch as an ordered pair (px, pz), representing the left/right and up/down positions of the ball as it crosses the front of the plate. This pitch-tracking data includes measurements of each batter’s stance, which can be used to normalize the up/down positions to account for batters of different heights. If we draw a scatterplot of these adjusted positions corresponding to called strikes during a given game, the outline of the points represents what we define as the umpire’s established strike zone. 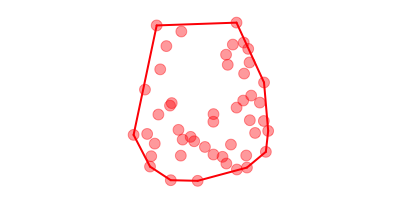 More precisely, the established strike zone is what mathematicians call the “convex hull” of these points. If you draw the points on a sheet of paper, the convex hull is what would remain if you trimmed the paper as much as possible, without removing any points, using only straight cuts that go all the way across the sheet.

A similar construction describes the alpha hull of a set of points: replace the paper cutter with a hole punch that can only punch out circular holes of a given radius. Punch out as much of the paper as possible, without removing any of the points, and what remains is the alpha hull. Unlike the convex hull, the alpha hull can have empty region in its interior. We can therefore define an umpire’s established ball zone as the alpha hull of points corresponding to called balls. 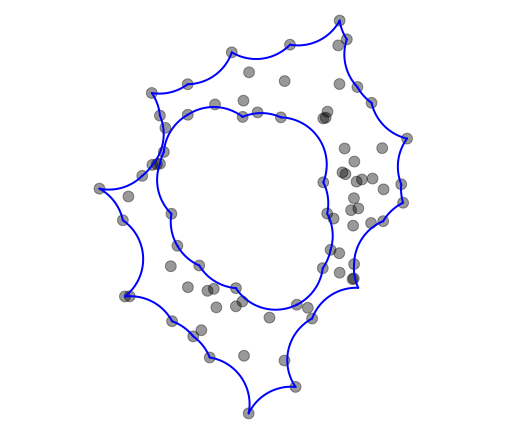 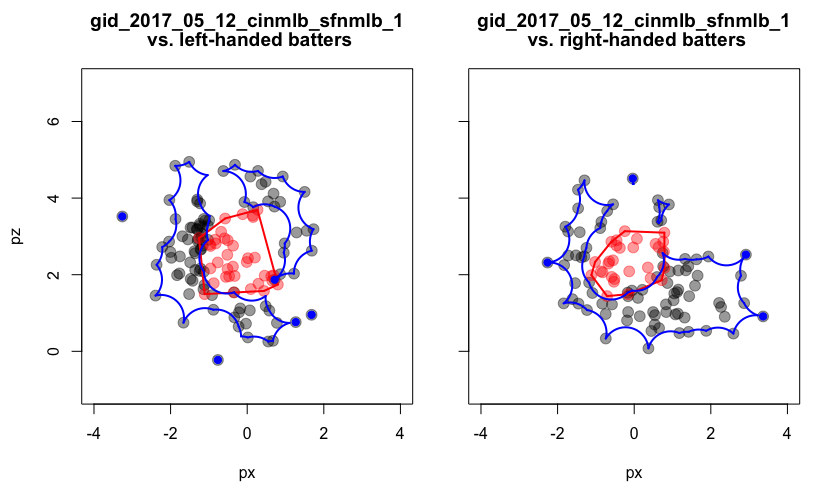 While the strike zones of these umpires may not robotically correspond to the rectangles we see on MLB broadcasts, the zones they do establish are remarkably consistent.

Graphs and computations in this article were produced in R, using the PitchRx and alphahull packages. Source code for producing these examples is available on GitHub.

David J. Hunter, Ph.D., is Professor of Mathematics at Westmont College, where he teaches courses in mathematics, computer science, and data analytics.

I hope that robozone enthusiasts will come to realize that professional umpires are better than it might seem based on evaluation only of how many called strikes/balls lie outside/inside the rectangle that ESPN insists on showing.

1
The Guru
Reply to  mgwalker

agreed…it doesnt matter if both teams get same zone. its actually remarkable how consistent umps can be with a zone. These millennials need to quit trying to change the game. so sad. before you know it, they’ll be safe zones located in the park for when they disagree with umpire.

To your knowledge, is there any easy way to get overall accuracy stats on an umpire? That is, error rates per umpire for the whole season.

@evo34: Jon Roegele discusses some of the difficulties in determining what constitutes an umpire error here:
http://www.fangraphs.com/tht/mlb-umpires-2016-review-world-series-preview/
He also gives some umpire rankings based on metrics he devised.

There has also been some discussion on how accurate Statcast measurements are, especially up/down: https://fivethirtyeight.com/features/baseballs-new-pitch-tracking-system-is-just-a-bit-outside/

So I think assessing overall accuracy is a little tricky.