When the Yankees re-signed Zack Britton as a free agent during this past offseason, there were some questioning if it made sense to bring back a 31-year-old reliever whose best days looked well behind him. Britton was good for the Yankees after being acquired from the Orioles in July 2018, posting a 2.88 ERA in 25 appearances, but his fielding-independent measures left more to be desired with a 4.08 FIP and lower strikeout numbers than what he posted during his dominant 2015 and 2016 seasons, performances that saw him emerge as the best relief pitcher in baseball.

Britton got off to a slow start in 2019, raising more questions about his long-term status and the Yankees’ decision to give him a large contract. He ended April with a 3.00 ERA, but his primary pitch, the sinker, did not have the same life on it that it did back in his prime years. The pitch sat mostly below 95 mph in April, and his FIP peaked at 3.93 on May 3rd, when he gave up two runs by issuing a walk and surrendering a home run in one inning against the Minnesota Twins. Since that point, Britton has issued five walks while striking out 12 in 16.1 innings and has only allowed three runs, coming courtesy of a Vladimir Guerrero Jr. home run on June 5th that was literally the first home run to be hit off a Britton sinker that was outside of the zone. That lone blemish aside, I noticed that his sinker has returned closer to its peak during this stretch, likely the best its been while Britton has worn a Yankees uniform.

To show that I am not making this up, here is a chart showing the average velocity of Britton’s sinker in every game this season:

According to Brooks Baseball, since his outing against the Giants on April 26th (in which he issued three walks), there has been an increase in average velocity each outing before a couple of drop-offs, but it has consistently been at around 95 mph and has averaged 96 multiple times since. The recent Vlad Jr. hiccup skews some of the numbers a bit, but during this period, Britton saw his ERA and FIP drop to their lowest marks of the season at 2.05 and 3.00 respectively before rising again after that June 5th game against Toronto. His strikeout rate also has risen to 22.3%, the best mark for Britton since his remarkable 2016 season. Also according to Brooks Baseball, the 95.52 average sinker velocity he recorded in May 2019 is the highest for Britton in a single month since September 2017. These are all good signs that suggest Britton’s progress in his road back to being an elite reliever.

What I wanted to look at next was how Britton was getting this increase in velocity. The thing I noticed was subtle: Britton has changed his release point on the pitch since that May 3rd outing against the Twins, and since then, he has been great. Again, it is a very subtle difference, but here is a chart showing his horizontal release point:

And here is another chart showing his vertical release point in each outing this season:

I am not a pitching coach by any means, but what jumps out to me from these charts is the overall consistency of his release points starting with the games against Tampa Bay, whereas prior to that, Britton’s release points were not very stable and jumped around from appearance to appearance, which could be a factor in those outings being more trouble for Britton than his more recent appearances.

I then went looking at video to try and see if I could spot the differences. Here is a GIF showing a 94-mph sinker in his outing against the Twins followed by a 96-mph sinker that results in a swing and miss against the Orioles. It can be difficult to spot a difference, so I took a still shot of each pitch’s release point, and I think you may see how they differ 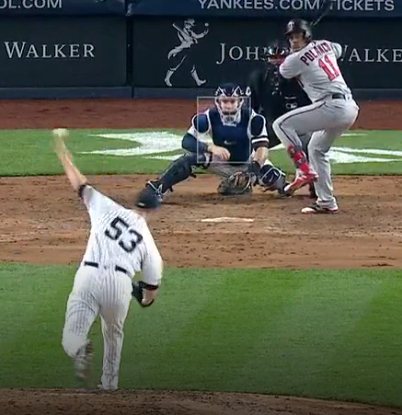 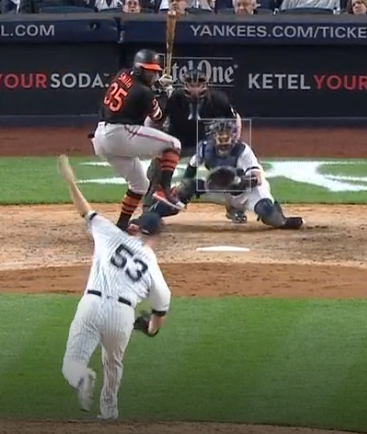 I tried as best as I could to take the still shot at the exact same point in Britton’s delivery. I used Britton’s left foot as a point of measure, and while I don’t think it’s perfect, I think you can still see a noticeable difference in these images. What stands out to me here is the different arm positions during the release of the pitch. In the second image, Britton appears to have his arm higher and tighter than the first image, which is consistent with the release point charts above, and a likely cause for the increased velocity.

Such a small change can make such a big difference for a pitcher, and it appears that the changes Britton has made recently to his release point have been a cause of his recent success. If Britton can keep up this stability, I believe that he can prolong his current run of success further and re-establish himself as one of the more dominant relief pitchers in baseball and make this signing another winner for the Yankees. Additionally, this could cause fans to forget about the recently departed David Robertson and Andrew Miller, two alternatives that the team could have signed this past offseason.

Fun Numbers Through the First Two Months
Will the Real Brad Keller Please Stand Up?