Who Is Yoshitomo Tsutsugo?

Last month, the Tampa Bay Rays signed Japanese slugger Yoshitomo Tsutsugo (筒香 嘉智) to a two-year contract for $12 million. If you add the $2.4 million posting fee paid to the Yokohama Baystars, Tsutsugo’s team in the Japanese League, that would make the Rays’ investment at $14.4 million total for two seasons. The 28-year-old left fielder has been expressing his ambition to play in the majors for years, and he finally found the team to play for. Now the question is who this guy is and how he will fit.

Tsutsugo has been one of the top prospects of Japanese baseball since his younger days. He was one of only two freshmen to hit cleanup in his high school team’s history. In his sophomore year, Tsutsugo led his team to the semifinal in Koshien, the biggest high school baseball tournament in Japan, with a .526 batting average, three home runs, and 14 RBIs in three games. It gained him enough attention to play on his country’s national team. In 2009, Tsutsugo was drafted by the Baystars as the first pick in the Nippon Professional Baseball (NPB) League.

Tsutsugo struggled in Japan until 2014. He struck out too much, and frequent injuries prevented him from playing full-time. Until 2014, he only had one season with more than 100 games played (NPB plays 144 per season). However, Tsutsugo started filling up his minimum at-bats, and his OPS has been over .900 every year since. The peak was 2016, when he hit 44 home runs in 133 games with an OPS of 1.110. He also played for Japan in the 2017 World Baseball Classic as the cleanup hitter and proved his power with three home runs and a .680 SLG in seven games. Throughout his nine-year career in Japan, Tsutsugo hit .285/.382/.528, good for a .910 OPS. The average OPS during that time was around .680 to .720. Yokohama’s superstar was truly one of the league’s elite power hitters.

Tsutsugo could have made the All-WBC team at third base, but Carlos Correa was hard to top.

After the 2019 season, Tsutsugo requested to be posted, and the Baystars obliged. Several teams including the Toronto Blue Jays, Chicago White Sox, and Detroit Tigers posted their bids, but Tsutsugo’s choice was the Tampa Bay Rays. It was reported that the Tigers offered a better financial deal (two years and $15 million), but the Rays promised more chances to play. Although a full-time role still wasn’t guaranteed, Tsutsugo chose more chances over more money. Now he has quite a competition waiting for him. Japanese media predicts him to compete with Hunter Renfroe, Ji-Man Choi, Austin Meadows, and Yandy Díaz for corner outfield, first base, and third base playing time.

Hideki Matsui was one of the greatest power hitters in NPB history. Tsutsugo’s nickname in Japan is “Matsui of Yokohama.” NPB has had a shortage of left-handed sluggers since Matsui joined the Yankees, and Tsutsugo finally took his role 13 years later. His OPS has been just about a guaranteed .900 every season since 2014 (.899 at 2019), with OBP marks .100 higher than his batting averages and slugging percentages over .510. His career isolated power (ISO) is .243, so he is definitely a power-focused hitter but also has decent contact skills (career .285 BA).

It also appears that Tsutsugo cares about his in-play qualities, too. His BABIPs over the past five seasons have constantly been above his career batting average and the league’s BABIP. He could have been lucky in his years he hit above .300, but he hits plenty of line drives. After all, that is a factor that many OPS-focused power hitters tend to have in the majors too, and you can expect the same from Yokohama’s superstar.

As stated above, his OBP is around .100 higher than his BA most seasons and in his career. He strikes out plenty, but his walk rate has increased. He’s been taking free bases over 80 times per season in less than 140 games. Tsutsugo is a balanced power hitter with great productivity at the plate.

Tsutsugo is not afraid of changes. He is known to alter his stance and swing every season. Originally he was a pull hitter, but he started pushing balls to left field in 2016, and his batted balls were spread throughout the whole field (left, center, and right all at 30%). And when it stopped working for him in 2019, he went back to pulling and performed better later in the season. Ichiro Suzuki and Matsui’s key to success was adaptability. When they first experienced the gap of pitch levels between NPB and MLB, they changed their approach at the plate without hesitation. As a result, both had great careers in the major leagues, and one of them is likely to get to Cooperstown the first year. Tsutsugo will most certainly change his swing once again in spring training next year, and the Rays and Japanese fans are ready to see how he adapts.

NPB is often considered to be somewhere between Triple-A and the majors (often referred to as AAAA or Quadruple-A). If a player shows the same performance as Tsutsugo’s in Triple-A, he is likely to be called up to the big leagues.

However, there are more concerns than hypes surrounding Tsutsugo. Most Japanese fielders from NPB in the past have not been very impressive. Even exceptions like Ichiro and Matsui (we’ll see how Shohei Ohtani does next year) had to suffer some effectiveness lost in translation to the majors. While Tsutsugo is definitely an impressive player in Japan, his records weren’t at the level of those two, and that means some skepticism.

Tsutsugo’s most widely known weakness is his defense. He was originally a third baseman, but he switched to first base early in his career and eventually settled in left field. But his defense has seen little-to-no improvement throughout his nine-year career. His UZR this season was -14.2, which was the lowest among all left fielders in NPB. He had a WAR over 5.0 only one season, in 2016, and it is mostly because his defense has hurt him. This is why teams that bid for him were all in the American League; they see Tsutsugo as a designated hitter. 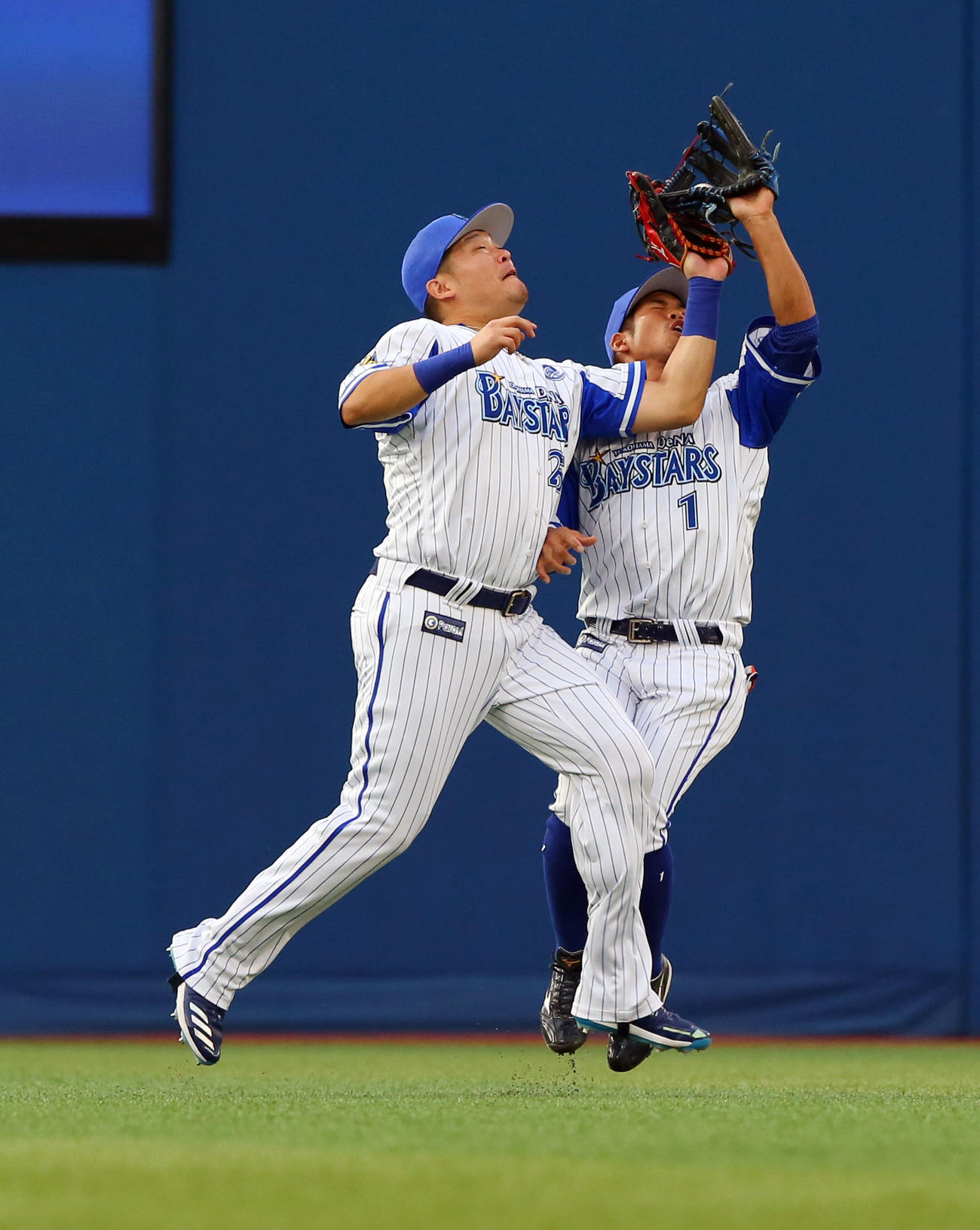 Tsutsugo is considered to be one of the worst defenders in the league.

His durability is a bit concerning, too. He struggled with injuries in his first five seasons. Although he hasn’t suffered any serious injuries since 2015, frequent minor issues have been preventing him from playing over 140 games. Major league teams play 18 more games than NPB, and many players from Japan, including Kosuke Fukudome, have shown stamina issues in the past. The same concern goes for Tsutsugo, as more games may add to an already high probability of injuries.

The biggest concern for Tsutsugo is how he will handle major-league fastballs. While he turned himself into a great hitter against offspeed pitches, he still struggles against high velocity. Just because a hitter hit 16 out of 29 home runs off of offspeed pitches doesn’t necessarily mean he has a weakness against fastballs, but if six out of 13 home runs from fastballs were towards left field, it makes you wonder a bit. As mentioned earlier, Tsutsugo is known to change his swing frequently, but then again, he is originally a pull hitter. In fact, his batted balls were toward right field 43% of the time this season, while just 28% went to left field. This created the biggest gap between left and right field in his career. Swings on those six home runs towards left may have been slightly late, and it could mean that he had a hard time with timing fastballs.

Fastball velocities are rising in the major leagues, which is why they are the biggest concern for Tsutsugo. The average fastball velocity in MLB is 93 mph. It is 90 mph in NPB, and 93 is considered a pretty fast pitch. Yusei Kikuchi of the Seattle Mariners averaged 92 mph with his fastballs in Japan, and that made him a great pitcher. However, it wasn’t really impressive at the major league level, and he had a disappointing first year with the Mariners. Tsutsugo has been struggling with fastballs at lower levels than Kikuchi’s, and that adds more to this concern. Out of 13 fastballs he hit over the fence this season, only two of them were over 93 mph. To add more to it, spin rates in fastballs will also be troubling. NPB also has its share of pitchers capable of 97-98 mph, but many of them lack in spin rates and vertical movement compared to those in MLB. Ohtani as a pitcher can pitch up to 101 mph, but that fastball lacks movement. His splitter was great, but his fastball was relatively easier to hit. Tsutsugo’s biggest key to success will be adaptability with MLB-level fastballs and their higher velocity and spin rates.

The final concern is loss of power in the majors. Matsui’s NPB record is legendary (.304/.413/.582), and Tsutsugo is not quite on that level. But even Matsui suffered a big loss in SLG and OPS as he moved to the Majors (.482 SLG, .852 OPS with Yankees). Ichiro also had a much better career than Tsutsugo, and in fact, his SLG was almost at the same level (.522). However, Ichiro also lost over 100 points in his slugging percentage and focused solely on contact. Tsutsugo is likely to change his swing once again, and it will probably be more focused on making more contact than before, meaning some of his power might be given up. Of course, even if he turns into a slap hitter like Ichiro did, as long as he finds a way to be productive, it will be much better than how ByungHo Park did with the Minnesota Twins. But it is still not very exciting to predict less home runs and extra-base hits from Japan’s strongest left-handed hitter.

The best and worst-case scenarios would be Hideki Matsui and Byung-Ho Park, respectively. Both had great power at the plate, but while Matsui found his way to survive, Park just couldn’t find a way to make contact. Matsui was well-aware of major league pitches and adjusted his swing according to it. It brought down his slugging percentage compared to his NPB years, but he still had a good career with the Yankees and was the World Series MVP in 2009. On the other hand, Park seemed to show off his power with long-distance home runs early in 2016, but as his weakness against fastballs was discovered, pitchers started punching the strike zone hard, and Park couldn’t adapt to it.

As stated earlier, Tsutsugo will most certainly change his batting stance and swing like Matsui did. His attitude and not being afraid to change is definitely a big positive note. We have seen too many players, not just Japanese ones, denying their issues and refusing to change, but the Rays’ new slugger is not one of them. He will do his best to adapt.

But then again, concerns are still there if you think about how Ichiro and Matsui declined in their stats as they moved to the majors. Ichiro had a Hall of Fame career in MLB, but his numbers were still significantly lower than those in his NPB career (.321/.365/.421 with the Mariners vs. .353/.421/.522 in NPB).

Assuming Tsutsugo outplays his competitors, he may end up with a .250/.335/.420 line. He can be better or worse, but with everything elaborated above and putting an if to his competition for his spot in the starting lineup, this may be the safe prediction. Hopefully he will be much better and prove this article wrong so we can get to see more talents from Asia on major league fields.