For a piece I wrote a couple of weeks ago, I used historical minor league stats to to construct a model that predicts how likely it is that a teenager in A-ball will make it to the major leagues. While this method produced some interesting results, it also had some flaws, most notably that it didn’t take scouting or defense into account. This basically meant that a great defensive player — or a raw, toolsy player — could easily get an undeserving low rating if he had a poor year at the plate. Another drawback was that it only applied to teenaged players in low-A, who represent a pretty small portion of players at the level, and just a sliver of the prospect population.

With these shortcomings in mind, I’ve taken another stab at predicting which players from the South Atlantic and Midwest leagues are most and least likely to make it to the show. Like last time, I ran a probit regression, which tells us how a variety of inputs can predict the probability of an event that has two possible outcomes — such as whether or not a player will make it to the majors. But instead of limiting my analysis to players under the age of 20, I considered all players and included age as a variable in my model. I also attempted to quantify scouting by taking into account whether or not a player made Baseball America’s pre-season prospect rankings. The model still relies heavily on offensive performance, but isn’t entirely guilty of “scouting the stat line.”

It’s come to my attention that Chris St. John of Beyond the Boxscore is doing something very similar with his JAVIER projection system, and it will be interesting to see where his model and mine agree and disagree once I repeat this exercise for all minor leaguers. Chris named his system after Chicago Cubs prospect Javier Baez, so I’ll follow suit and also name mine after a prospect. Yankees’ prospect Gosuke Katoh was my original my inspiration for this idea, so I’ll call my methodology KATOH. Without further adu, here’s the resulting R output if you’re into that kind of stuff: 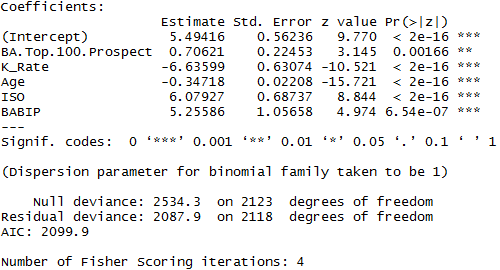 A player’s age, prospect status, strikeout rate, ISO, and even BABIP all proved to be predictive in the direction you’d expect. But the show-stopper here is that a player’s walk rate isn’t at all predictive of whether or not he’ll make it to the majors. One possible explanation is that — unlike power or speed — plate discipline is a skill that can be learned, and many players in low-A are still developing their batting eye and learning to lay off pitches. As one example, Brian McCann walked less than 5% of the time as a 19-year-old in the Sally League, but still developed into a relatively patient big leaguer.

Another possibility is that you don’t have to be a particularly good hitter to run a high walk rate in low-A. Pitchers at that level often have little idea where the ball’s going, which enables hitters to take an ultra-passive approach in the hopes that they’ll see four balls before they see three strikes. That strategy might work in the low minors, but can lose it’s effectiveness in the upper-levels where pitchers have a better handle on their control. I’ve included an excerpt of what KATOH spits out for modern-day players in low-A who logged at least 250 plate appearances through July 7th. The full list of qualifying players can be seen here.

Over the next couple of weeks, I plan to repeat this exercise for all levels of minor league play. As I climb the minor league ladder, it will be interesting to see when — or even if — a hitter’s walk rate starts to be predictive of whether or not he’ll make it to the majors. Keep an eye out for the next iteration, which will look at high-A stats and slap probabilities on current high-A players.