The Reds May Have Andrew Miller 2.0

Andrew Miller has an undeniably nasty slider. As a Red Sox fan, I remember it far too well from the 2016 postseason. Big Papi’s farewell tour didn’t seem all that fair when you consider the way the Red Sox ran into the buzz-saw that was Miller and the Cleveland Indians. Sure, I’m grateful for Miller helping the 2013 version of the Red Sox win a third world title since 2004, but come on Andrew, you had to ruin Papi’s goodbye?

With Miller’s recent signing with the St. Louis Cardinals, I found myself exploring his FanGraphs page. I stumbled upon this article, Andrew Miller on the Evolution of his Slider, and I instantly began to wonder if pitchers had similar experiences developing their sliders in the 2018 season. The first step in this analysis was to evaluate the evolution of Miller’s slider. 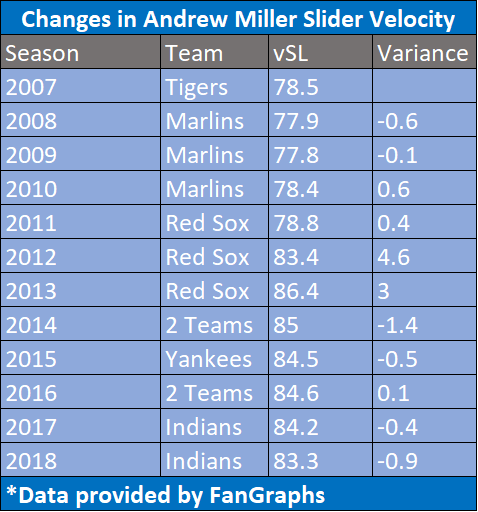 What jumps off the page is the change in velocity. Miller saw a 4.6 mph increase in his slider from 2011 to 2012, then another 3 mph added from 2012 to 2013. This in large part had to do with Miller moving from a starting role to a relief role during his time with the Red Sox. Given that information, however, an increase in velocity that drastic not only shows a pitcher’s willingness to adapt, but also a pitcher’s ability to adapt. By observing Miller’s slider splits, we see that ability to adapt almost immediately. 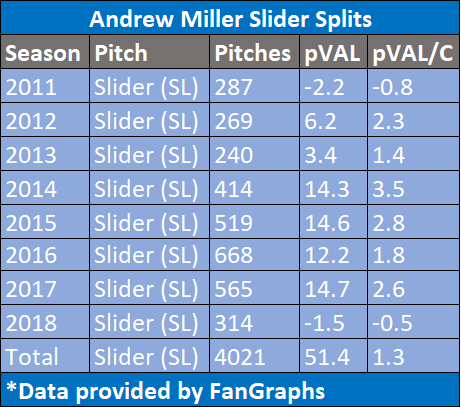 The large dividends didn’t pay immediately, particularly when we look at pVAL. However, an important thing to note is Miller finally got out of negative territory by that metric. When his velocity saw that initial spike in 2011, his pVAL was positive. By the time 2014 came along, Miller was throwing his slider well over 400 times and his pVAL nearly quadrupled from the 2013 season. Naturally, the next step in this process was to observe which pitchers experienced similar increases in slider velocity between the 2017 to 2018 seasons. The results: 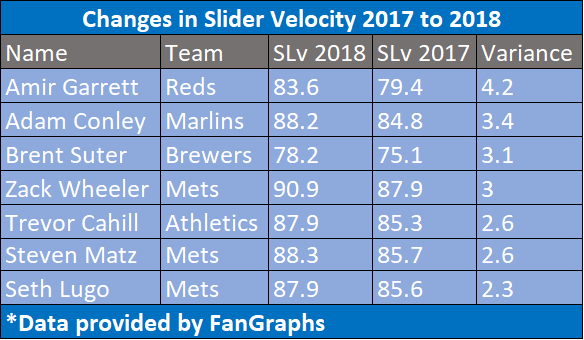 This is FanGraphs data, which I queried using 50 innings as the minimum for pitchers just to acquire an interesting enough sample size. Full disclosure, I removed players that simply added sliders to their arsenal, as that is not the point of this exercise. I’m simply interested in player’s that added to their slider velocity from 2017 to 2018.

There’s two things that are interesting when analyzing the above table. The Mets’ continued interest in increasing slider velocity, and the man at the top of the list, Amir Garrett. Garrett started in 14 games in 2017 and then was moved to the Reds’ bullpen in 2018. The change in role appeared to serve him well as he saw an increase in his ERA+ from 61 to 98 and an increase in K/9 from 8.0 to 10.1. This is certainly interesting, but it gets better when we view Garrett’s FanGraphs slider splits:

Does this look familiar? Look back at Miller’s slider split table and view the pVAL/C column from the years 2011 to 2012. In the years in which Miller and Garrett added velocity to their slider, they saw their pVAL/C for the pitch jump to nearly identical values. I understand Garrett’s overall body of work is far smaller than Miller’s, but we are observing a phenomenon that is stark in contrast. If this isn’t enough, just look at the actual pitches yourself.

Here is Miller Striking out a lefty on a slider:

Here is Garrett striking out a lefty on a slider:

How do you explain the vast difference between Miller and Garrett? Miller had an ERA+ of 127 in his first full season out of the bullpen, while Garrett did not quite have that level of success, as his mark of 98 was right around average. There are several reasons why this might be the case. First I considered that maybe it’s because Garrett doesn’t have the most effective fastball. That may be important, but Miller also didn’t have an effective fastball in his first season out of the bullpen. In fact, Garrett has a fastball that is a tiny bit faster (95.1 mph vs. 94.9 mph) than Miller’s during these observed time periods. Garrett’s 2018 fastball had a wRC+ against of 148 while Miller’s 2012 fastball had a wRC+ against of 147.

Heading into the 2019 season, I’m curious to see if Garrett can increase his slider velocity even more in order to see better results. I’m also interested to see if the Reds trend toward letting Garrett’s slider fly. According to FanGraphs data, Garrett’s slider usage went up from 22.5% in 2017 to 33.3% in 2018. Meanwhile, Miller had a slider usage of 23.5% in 2011 that went up to 39.4% in 2012. However, those figures are a far cry from Miller’s astronomic 60.5% slider usage in 2016. If the Reds continue to see the value an elite slider can bring to their bullpen, they may have found baseball’s next-closest thing to Miller considering the similar trends. The Cleveland Indians knew a good thing when they saw it, and we’ll see if the Cincinnati Reds can do the same thing.

Saw him pitch in Cincinnati last summer and was very impressed with him. Could definitely see him making strides this year with a more competitive Reds team.