The Curious Case of Cody Dent

From my personal blog: msilbbaseball.wordpress.com

Path to the Draft

What’s the usual story with first-year draftees?  They put up stellar numbers in college and/or high school, but can’t replicate those numbers after they’re drafted due to better competition in the minors.  A college All-American who hit .400 can struggle to stay above .200 as they adjust to minor-league ball.  It’s nothing to worry about, just the way things go.  So what would you expect to see from a college senior infielder, converted outfielder, converted back to infielder who hit .176 in 330 career at-bats, who didn’t hit a home run until the end of his last season, and who only had six extra-base hits in his entire college career?  I’d have my doubts that this player would even record one minor-league hit.  However, I present to you Cody Dent, the man who’s mirroring the trend.

Speaking of home runs, his father did this.

Cody played for four years at the University of Florida, and reached the College World Series three times.  Throughout his career, he was a light-hitting utility infielder who saw a majority of his time as a defensive replacement.  During his senior year, Dent started 48 games for the Gators, but his struggles at the plate still remained.  Cody hit .233 his freshman year, then .207, .134, and .169 in each subsequent season.  But, he’s 6th on UF’s all-time sacrifice bunt leaderboard with 26 in his college career.  So, that’s something; It seems like he’d make a good-hitting pitcher. 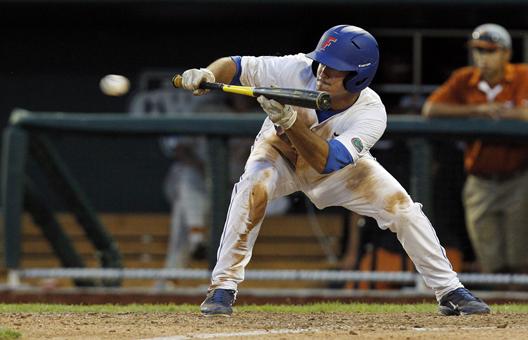 Cody Dent Bunting for the University of Florida

Dent’s bright spot was the 2011 NCAA Tournament, where he played in and started 11 games, and hit .273 with a double, triple, and 4 RBIs as the Gators made it the championship series in Omaha.  He was named to the All-Tournament team.  Following his senior season, the previously undrafted Dent was selected by the Washington Nationals in the 22nd round of the 2013 First-Year Player Draft, likely/hopefully for his defense.

As a student a the University of Florida, I attended a large amount of baseball games, and I always rooted for Cody to do well.  He never showed negative body language, and went about his business professionally.  Also, he was the king of the “at ’em ball”.  I can’t count how many times he’s hit a rope right at an outfielder.  I always imagined what kind of horrible BABIP Dent would have, so I calculated it.  During his senior season, Cody Dent had a .193 BABIP.  With an average BABIP ranging from about .290 – .310, this created a huge dent in his average (pun intended).  Some players have established BABIPs in a different range (ex. Miguel Cabrera and Ichiro Suzuki around .345), however .193 can not be the true average for an SEC starter with MLB bloodlines.  By personally watching Dent play, I can also attest that he’s better than the numbers show.  I consider BABIP to be a measure of luck, and use it to determine whether a player is playing at their true ability.  A BABIP far under the average means that a player is under performing, and a BABIP far above the average means that a player is over performing.  To re-iterate, Dent’s senior BABIP was .193.  This, coupled with only an 11.7% Strikeout Percentage (K%) creates a sense of hope that Cody could grow into a serviceable/not as dreadful bat.

So what does he do during his first 27 games in Short-Season A ball?  Hit .278/ .365 /.300 with a .326 wOBA and a 108 wRC+.  With 100 being the standard average for wRC+, this means that Cody Dent is an above-average producer in Short-Season A ball.  ABOVE AVERAGE!!!  Considering the offensive woes he went through as a Gator, this is absolutely huge.  Maintaining his improved offense will be a challenge for Cody, as he’s in danger of regressing.  Dent’s minor-league BABIP is .387, way above average, and astronomically above his college numbers.  Is this a sign of the real Cody Dent?  Is he having a lucky month?  Or has Cody Dent gone through enough punishment and suffering from the baseball gods that they’re rewarding him for his perseverance?  It’s time to sit back and watch The Curious Case of Cody Dent.

The Art of Doubling to the Pitcher
What Kind of A-Rod Will We See?

Guest
Bruce
You can flag a comment by clicking its flag icon. Website admin will know that you reported it. Admins may or may not choose to remove the comment or block the author. And please don't worry, your report will be anonymous.

Cody Dent, can he be trusted?

Guest
mike savino
You can flag a comment by clicking its flag icon. Website admin will know that you reported it. Admins may or may not choose to remove the comment or block the author. And please don't worry, your report will be anonymous.

I don’t think this is entirely fair. A big part of minor league baseball is age vs the competition and since he went to college for 4 years, he’s, what, a 23-year-old playing against a bunch of high schoolers? He should be better. However, I will agree that this is a good sign especially if his defense is good.

Still, though, congratulations to him.

Member
JoseCansecoForMayor
You can flag a comment by clicking its flag icon. Website admin will know that you reported it. Admins may or may not choose to remove the comment or block the author. And please don't worry, your report will be anonymous.

I would attribute most or all of his success to a .378 BABIP and the fact that at 22, he is older than almost all the players in that league. A .029 ISO and 25.2 K% aren’t promising. While a .193 BABIP is low, Dent’s true talent is probably below the .290-.310 range, especially since he isn’t getting XBH. In my experience as a college coach, there can be a really wide range of BABIP skills since the talent range is broader than in Major League Baseball. We don’t have batted ball data, but I would guess his xBABIP would… Read more »