The Angels Are Defying the Strikeout Trends

While perusing through the newly introduced +Stats section released recently by FanGraphs, I couldn’t help but notice at the time that three Los Angeles Angels players held the top three spots for the lowest K%+ for 2019 thus far among qualified hitters, with an additional two Angels players joining them to round out the top 30. The first two players were David Fletcher and Tommy La Stella; these two players are roughly average hitters at best, but they have each run a far-below-average K% thus far in their professional careers, so seeing them at the top here isn’t too shocking in a small sample size. The third was of course Mike Trout, who has decided he doesn’t feel like striking out anymore while still maintaining his incredible hitting prowess. Out of all position players that have been qualified hitters in both 2019 and 2018, only Matt Chapman has lowered his K%+ by more in absolute terms (Chapman’s -67 to Trout’s -62), and nobody has lowered their K%+ in percentage terms more than Trout has, as detailed in the chart below: 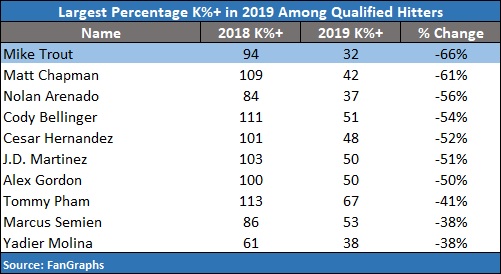 Overall, no other team in baseball has more than two players in the top 30 of this K%+ measure, and by simple deduction, a handful of teams have not had one single player within that cutoff. Devan Fink has also written about how the Angels are not striking out in 2019, but I was curious to see how their players are stacking up with other recent seasons, so I set the parameters to include all qualified seasons from this decade, and the results were surprising. 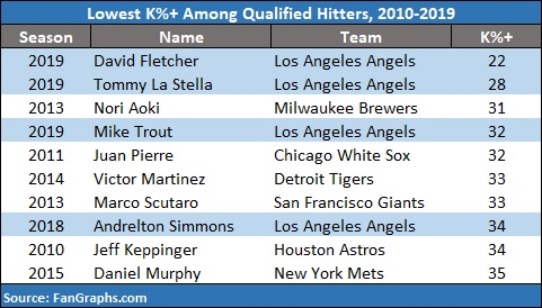 Although this is in just a small sample size as mentioned earlier, it’s still noteworthy that those three players make up three of the top four qualified seasons since the beginning of this decade. I’ve also highlighted Andrelton Simmons‘ 2018 season, which was also another top-10 placing for the Angels. Although Simmons doesn’t appear in this chart for his 2019 season, he wasn’t far off with his K%+ of 46, ranking 12th for the season. With all of these Angels players posting such low K%+ figures, it had me even more curious as to how they stack up as a team historically, and whether this is an intentional approach they’re implementing.

To see how the 2019 Los Angeles Angels team compares historically to other teams on K%+, I gathered the data for all team seasons with data available; there is currently some missing information on K%+ for team seasons dating between 1882-1912, but I used team data that was available for those seasons. The results honestly were pretty shocking to me – I expected the Angels to be doing well, but not historically well, as we can see from the following chart: 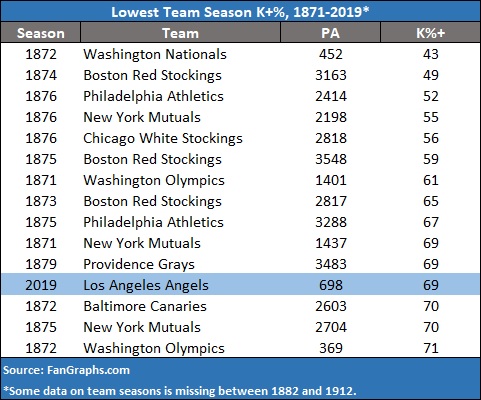 With a nice team K+% of 69, not only are they tied for 10th all-time, they’re surrounded by team seasons solely from the 1870s! There’s surely some regression around the corner, but it truly shows how much of an outlier they’ve been thus far. It’s also interesting to note that the Washington Nationals of 1872 played their only season of existence in the National Association that year, and while they posted the best K+% as a team of all time in their shortened eleven-game season, they couldn’t pull together a single win, finishing 0-11. That’s not a very large sample size either, so I’d consider the 1874 Boston Red Stockings’ season as the best of all time.

Obviously the game was very different back in the 1800s, and even after the turn of the century, the game doesn’t become very comparable until at least the end of the deadball era. To further gain perspective of the 2019 Angels’ K+%, I’ve compared them to all team seasons starting after the end of the deadball era, to see how far ahead they are in the more modern game. 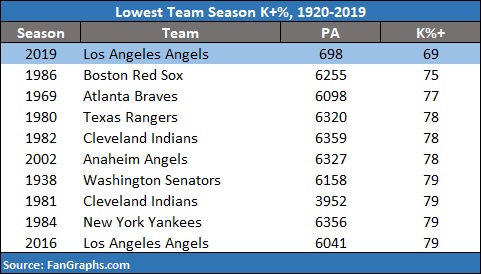 It may not seem like much, but their lead over the next best team, the 1986 Boston Red Sox, is really quite drastic. To put it into more perspective, the difference between the 2019 Angels and the four teams tied for 7th with a K%+ of 79 is the same difference that those four teams have between themselves and the 23 teams that are tied for 105th with a K%+ of 89. As the season progresses, it’s safe to assume that their K+% will rise, but it’ll be interesting to see where they fall when it’s all said and done. If you hadn’t noticed, tied for 7th at the bottom of the above chart is none other than the 2016 Angels team that led the league by quite a large margin as well, so there is some precedent here in recent years for these Angels teams to pull this off.

While this could strictly be an anomaly due to the season still being so young, I wanted to see if the underlying plate discipline statistics pointed toward a change in approach that the hitters may be taking that has resulted in such an extreme outcome. To do this, I compared both the Angels’ 2018 and 2019 (to date) seasons with all team seasons over the past decade, to determine where they rank in overall percentiles, and how much has changed for the Angels since last season, to see if they’ve approach hitting differently from last season.

This year’s team is swinging at or near record lows for the decade, both in terms of in-zone and out-of-zone pitches. While their contact on out-of-zone pitches isn’t very high (which isn’t such a bad thing, as out-of-zone contact results in weaker contact and worse results), their in-zone and overall contact percentiles also rank extremely high for the decade. When you combine the factors of swinging much less along with making much more contact when you do swing, it follows that the results will be a large decrease in strikeouts.

This looks to be an intentional approach, and although it hasn’t quite resulted in better batting performance (92 wRC+ to date, a statistic that would be much lower without Trout to propel them), I’m very curious to see how the rest of the season will pan out and if they can continue and finish with the lowest K+% in modern baseball history. They’ve posted an anemic .244 BABIP to date, and they have under-performed their xwOBA (.319 vs. .300 actual wOBA) as well, so the team’s offense could be trending upwards with some better luck and a continuance of their swing and contact percentages. If not, this may just end up being another case study and evidence of the decreased importance of putting the ball in play at all costs.

Kevin McAteer is an accountant who wishes the audit analytics he performed were half as interesting as baseball analytics.

Member
PandaKOST
You can flag a comment by clicking its flag icon. Website admin will know that you reported it. Admins may or may not choose to remove the comment or block the author. And please don't worry, your report will be anonymous.

Member
Corey2
You can flag a comment by clicking its flag icon. Website admin will know that you reported it. Admins may or may not choose to remove the comment or block the author. And please don't worry, your report will be anonymous.

Why use k+%? I don’t understand what this stat is, but it appears to be perfectly correlated to k%, so why not use k% which people understand?

Of course, K%+ is perfectly correlated to K% in a given season. However, a 15% K% in 2019 may be considered great, while a 15% K% in 1875 would be considered quite poor. K%+ allows for the comparison across multiple seasons and eras based on the context, league environment, and the average K% rates in those seasons.

Member
Gabriel T
You can flag a comment by clicking its flag icon. Website admin will know that you reported it. Admins may or may not choose to remove the comment or block the author. And please don't worry, your report will be anonymous.

I wonder how much this number will be affected when Justin Upton returns considering his strikeout rate has been over 28% the past 3 seasons.

Yeah, Goodwin has been playing great, and his lower 19.8% K% this season would be significantly better than a 28% that Upton may have had at this point. By my super quick and rough calculation, the team would go from a 69 K%+ as of today (4/30/19) to a 74 K%+. A big difference for sure, but they would still be leading the way at least for modern teams, though by a much thinner margin.

Member
Gabriel T
You can flag a comment by clicking its flag icon. Website admin will know that you reported it. Admins may or may not choose to remove the comment or block the author. And please don't worry, your report will be anonymous.

Still not too shabby. Love the work!

Member
John Autin
You can flag a comment by clicking its flag icon. Website admin will know that you reported it. Admins may or may not choose to remove the comment or block the author. And please don't worry, your report will be anonymous.

This is not a new thing with the Angels. They have the fewest total Ks since the start of 2015.

But it’s done them no good. They’re 10th in AL scoring in that span, last in BA, next to last in SLG.

And their BAbip is dead last in all MLB.

Meanwhile, their last playoff team, 2014, struck out MORE than average, but led the majors in scoring.

There just might be a lesson there. Contact for the sake of contact has no real value. In this era, it does not correlate with offensive success.