Six-Trick Ponies: Could the Reds Do More with Michael Lorenzen’s Tools?

Michael Lorenzen is one of a kind. We’ve heard plenty of his multi-faceted accomplishments as of late. As far as pitchers go, the guy can mash. He was a two-way star at Cal State Fullerton, slashing .335/.412/.515 in his draft year, while posting 19 saves and a 1.99 ERA out of the bullpen. In the big leagues, he’s a career .267/.306/.514 hitter with seven home runs in 116 plate appearances. The hits haven’t come cheap, either. His 14 batted balls this season have had a remarkable 98.70-mph average exit velocity, despite him only barreling one of them.

Lorenzen can also move better than most. His top sprint speed of 28.2 mph in 2019 places him in a tie with Bryce Harper, Shohei Ohtani, George Springer, and Jorge Polanco, among others. His general athletic prowess means he’s been serviceable enough to play in the field with some level of frequency, converting all eight of his chances in 34.2 innings split over three outfield positions. On September 5th, the day after his historic performance, he even earned himself a start in center field for the out-of-contention Reds.

His Swiss Army knife capabilities aren’t the only reason he’s unique. Lorenzen is an outlier on the mound as well. Lorenzen has spent the last four years as a solid reliever, working to a cumulative 3.48 ERA over 290 innings out of the Cincinnati bullpen. After a failed run as a starter in his rookie season, he seems to have found his niche working in the later innings.

This is far from out of the ordinary. But while failed starters tend to simplify their pitch mix upon shifting to the bullpen, Lorenzen has doubled down on his six-pitch arsenal, throwing each of his four-seamer, sinker, cutter, changeup, cutter, slider, and curveball between 7% and 28% of the time. It’s rare enough for any pitcher to have a true six-pitch mix, much less a reliever. I ran a Statcast search to find every pitcher since 2017 (when Statcast arsenal data begins) to have thrown at least six pitches between 5% and 40% of the time, minimum 250 pitches per season. Lorenzen still stands out:

With the exception of Bauer, who decided to turn himself into a video game create-a-player in 2018, we see a distinct pattern here. These are pitchers possessing considerably below-average velocity, who need to remain as unpredictable as possible just to survive in the big leagues. Largely, they have been unsuccessful. Even the mid-career veterans with established resumes like Tanaka, Samardzija, and Maeda recorded their worst seasons while turning to a true six-pitch mix.

Where does that leave us with Lorenzen? Beyond his outlier velocity and effectiveness, he’s also one of just four relievers to appear on this list, along with Alvarez, Ramos, and LeBlanc. Alvarez and LeBlanc are soft-tossing lefties by trade, while Ramos’s shoulder gave out and he has yet to make a big-league appearance in 2019.

What’s the point of all this? I’m proposing that the Reds move against conventional wisdom and give Lorenzen another shot at starting. A closer look shows that his ability to mix it up isn’t a gimmick. He’s made enough changes since 2015 to reasonably believe his skillset might be able to translate to 150 IP rather than just 75.

The first impediment to this idea is that Lorenzen has shown himself to be both an effective reliever and a not-so-effective starter. The second is that between Luis Castillo, Sonny Gray, Bauer, and Anthony DeSclafani, the Reds already have four solid options penciled into their 2020 rotation. Even in this age of data-driven decision-making, baseball as a whole is still notoriously risk-averse. Why mess with a good thing?

The Reds have as solid of a front four as anybody in the NL Central, and equally as little depth afterwards. Alex Wood is slated for free agency, and Kevin Gausman appears likely to be non-tendered. Current fifth starter Tyler Mahle owns a 4.78/4.74 ERA/FIP over 48 career starts. Top pitching prospect Hunter Greene is recovering from Tommy John surgery and has yet to make an appearance above High-A. They have no pitching prospects to speak of in the high minors. Reinforcements aren’t just bleak, they’re nonexistent.

There may not be much help available in free agency, either. The Reds’ 2019 payroll of $128 million is easily their highest ever, and forthcoming arbitration cases for Bauer and DeSclafani will likely push them near $100 million before free agency. With more than a few holes in their lineup, the Reds are going to need to get creative on the pitching side unless owner Bob Castellini wants to start spending money like the Ricketts family.

The bullpen is the area in which they are in a position to take some risks. Even without Lorenzen, the Reds have the makings of a fine relief corps. Raisel Iglesias has been inconsistent this year, but with a track record of success, an affordable contract, and stable peripheral numbers, he can be reasonably counted on to bounce back in 2020. Robert Stephenson doesn’t have the control to start, but he has been effective in 2019 and has as high of a ceiling as any reliever in baseball. Amir Garrett throws in the upper 90s and has an unhittable lefty slider. Enough said.

There’s still the matter of Lorenzen being thoroughly below average in his first run as a starting pitcher in 2015. But as I said, his transformation from subpar starter to effective reliever has not been in the classic mold. There are reasons to believe that the things that make him a good reliever now can make him a more effective starter in 2019 than he was in 2015.

Let’s assume that in a starting role, he loses a full two ticks on the 97.1-mph fastball he’s thrown in 2019. That still places it a full 2 mph above the 93 averaged by MLB starters in 2019. Ditto his 2524 rpm spin rate, for which the league average sits at 2274. Furthermore, take a peek at Lorenzen’s heatmaps for that four-seamer from 2015-2018, followed by where he’s thrown it this year: 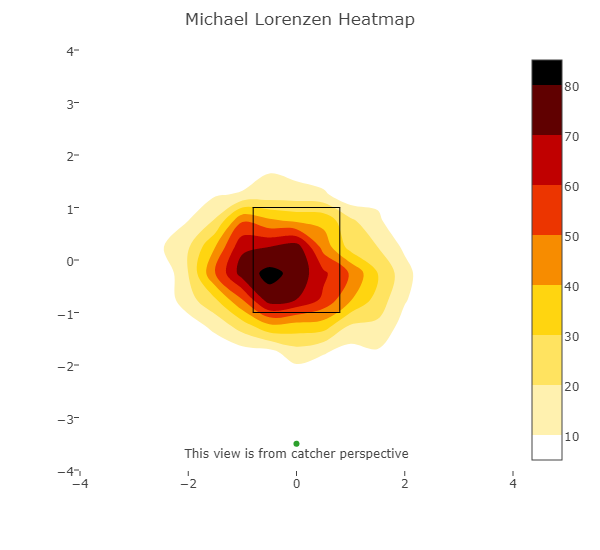 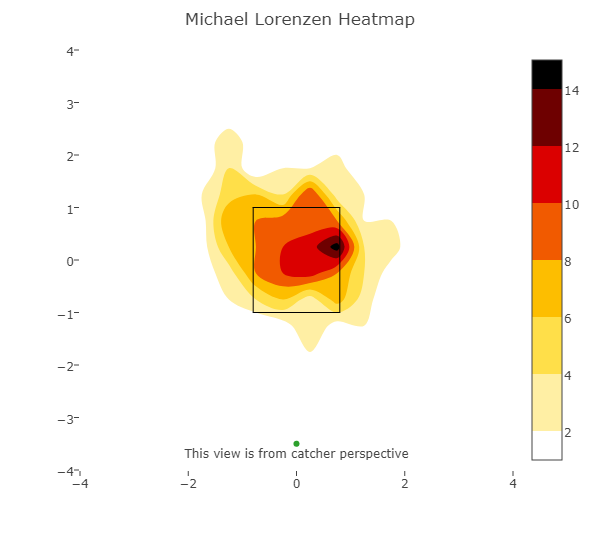 Suffice to say, Lorenzen has learned where to put his fastball. The xwOBA on the pitch in 2019 sits at .294, down a full hundred points from the collective .398 xwOBA against it from 2015-2018. The velocity bump helps, but the location doesn’t lie. It’s eminently reasonable to believe that his newfound ability to avoid the middle of the plate with the pitch would allow it to maintain its effectiveness, even with the diminished velocity of an increased innings load.

His four-seamer isn’t the only pitch that could feasibly translate from the bullpen to the rotation. Another key to his success has been how he’s deployed his changeup. Until 2019, the pitch was just plain ineffective; he threw it only 5.2% of the time to the tune of a hideous .403 wOBA. That has changed dramatically in 2019. This season, he’s thrown the pitch nearly 20% of the time, with hitters scraping a .177 wOBA against it. The velocity and movement profile of the pitch hasn’t substantially changed since he broke into the big leagues, nor has its location. What’s going on? The biggest difference appears to be when he’s using the pitch:

I’ve excluded the 2016 and 2017 seasons, in which he only threw 39 changeups in total. Now he uses it as his primary putaway pitch, throwing it more with two strikes than any other offering, and almost never when behind in the count. It makes sense. Even though it’s gotten hammered in the past, it always gotten an above-average number of whiffs, and that whiff rate has skyrocketed to 44.9% this season. A Brooks Baseball scatter chart of his pitch movement profile might explain why: 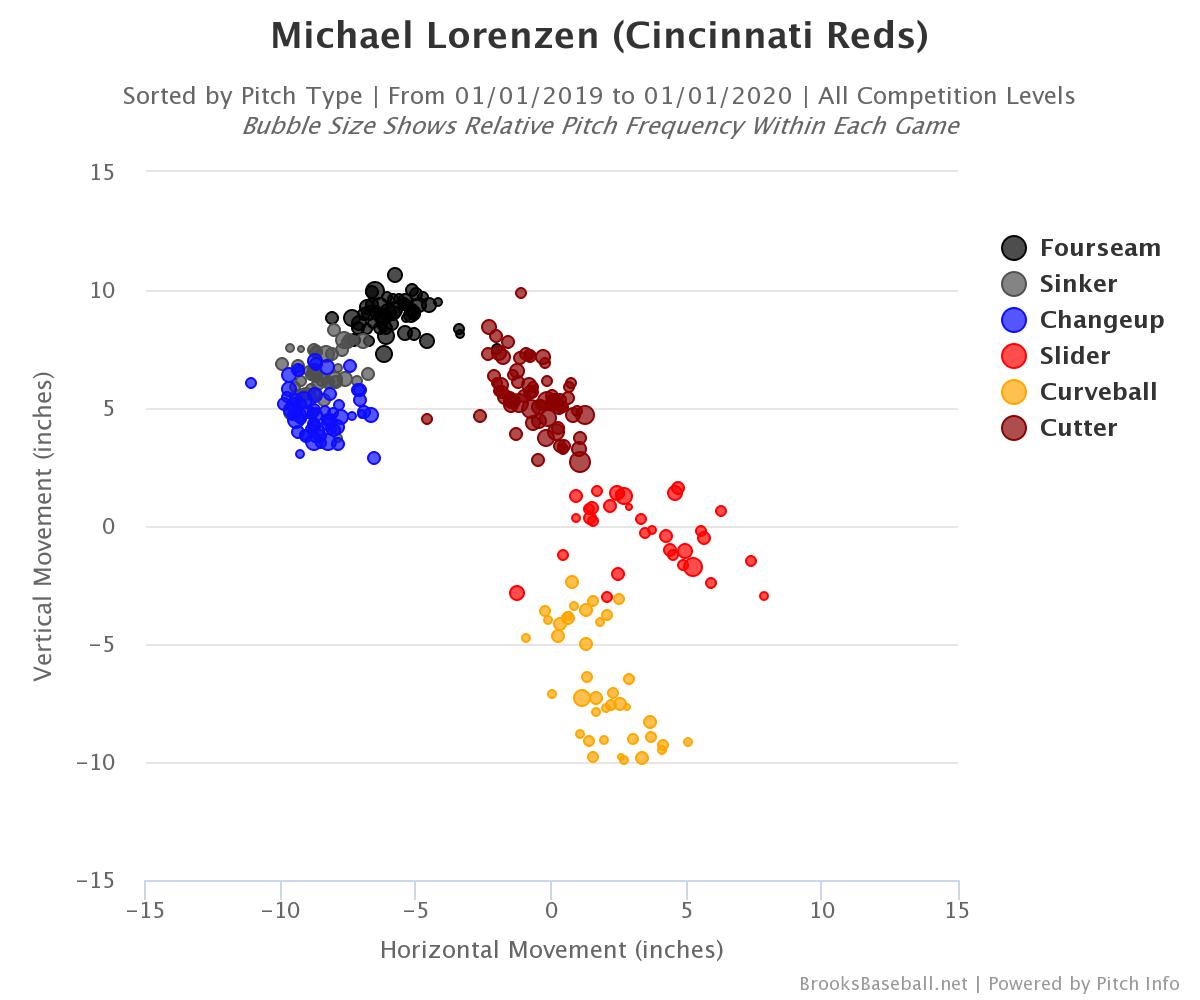 Look at the cluster of four-seamers, sinkers, and changeups in the upper-left corner. The shape of the pitches is quite similar, with a particularly large overlap between the changeup and sinker. Because of the velocity difference, it stands to reason that the changeup would be more effective with two strikes. A hitter protecting the plate is far more likely to whiff or make weak contact when he reads a fastball, gets a pitch a full 10 mph slower, and has to swing anyway. It’s a feasible explanation for the near-15% increase in Chase % he’s garnered on the pitch this season.

There’s no reason to believe his breaking pitches won’t translate, either. His big arsenal means he doesn’t have to disproportionately rely on them for outs, potentially leading to a decrease in effectiveness multiple times through the order. Despite leaving too many hangers over the heart of the plate, his slider still possesses an elite 45.7% whiff rate, and it’s typically been an above-average pitch on the whole. The same goes for his curveball, which generates grounders at an elite rate and has done so for the majority of his career. While he’s refined his fastballs and changeup, he hasn’t needed to do the same with his breaking balls. They’re fine pitches that ought to work well in moderation, no matter the role.

These are all traits that should reasonably translate well over an increased innings load. There’s always the possibility that his mechanics could falter and his command wane once he gets into deeper pitch counts. But it’s clear that Lorenzen’s approach is atypical for a reliever. His top-of-the-line spin rate means that his fastball should stay effective if he can maintain his newfound command of it. He’s learned how to sequence his changeup to miss as many bats as possible. He can vary his four-seamer, cutter, and sinker just enough to keep hitters off-balance.

He can induce righties to whiff on his slider, lefties with the changeup, and victimize them both with high fastballs. He’s always gotten a healthy number of grounders. The effectiveness of the curveball, changeup, and sinker in that regard should still offset the fly-ball-heavy tendencies of the four-seamer and slider. He’s far from the one-trick pony he was as a rookie.

Lorenzen isn’t throwing six pitches solely to mess with timing and compensate for an arm with too many miles on it. It’s not hard to believe he has enough up his sleeve to get hitters out more than once. It seems Cincinnati could do worse than giving him a shot to have three at-bats in a game rather than one.

Mike Ford: The Player Within
Which Playoff Team Has the Most Former Players from Your Favorite Team?

Member
Spitball McPhee
You can flag a comment by clicking its flag icon. Website admin will know that you reported it. Admins may or may not choose to remove the comment or block the author. And please don't worry, your report will be anonymous.

7 pitches if you include the cutter twice 😉