Reflecting on the Cubs’ Five-Year Run

Last month at The Athletic, Patrick Mooney and Sahadev Sharma took a deep dive into the Cubs’ successes and failures from 2015 through the conclusion of 2019. This led me to reflect upon this five-year run and try to figure out if, on the whole, it should be considered a success. They famously broke the franchise’s 112-year World Series drought, yet this Cubs team has seemed to leave baseball fans (especially Cubs fans) wanting more. When they took the league by storm in 2015 to the tune of 97 wins (a meteoric 24-win increase from the previous season), the baseball community was not asking if this group would win a World Series, but when. After the 2016 championship, we spent all offseason dreaming about how many World Series this group could claim over the next five years.

Of course, this Cubs group has yet to win another ring. Joe Maddon has left. Trade rumors have been swarming around the likes of Kris Bryant and Kyle Schwarber following reports of the Ricketts wanting to cut payroll. How do the Cubs pivot after this lost season? How much longer does Theo Epstein have to turn this ship around? These are the existential questions being asked in and around Wrigleyville after this season’s second-half collapse.

However, I would argue these questions are not totally fair. This Cubs core of Bryant, Anthony Rizzo, Javier Baez, and Jon Lester has led the team to post one of the best five-year runs in the National League since the inception of the Wild Card in 1994. The Cubs were swept in the NLCS in 2015 at the hands of the Mets, won the World Series in 2016, lost the NLCS in five games to the Dodgers in 2017, lost in the wild card game to the Rockies in 2018, and missed the playoffs this year. Those regular seasons, in order, consisted of 97, 103, 92, 95, and just 84 wins this past season. Simply looking at the playoff and regular season results, this does not feel like a completely dominant stretch of baseball.

Looking at wins and losses can be misleading. Team strength is dictated by how much you outscore the other team by. Take the 2013 Orioles for example. They won 93 games and reached the playoffs but only outscored their opponents by seven runs over the 162-game season (or .043 runs per game). The 93 wins came from going 29-9 in one-run games which, for the purpose of determining team strength, is relatively meaningless. I would argue this Baltimore group was more average than playoff-caliber. Obviously looking at raw run differentials fails to account for run expectancy and hit-clustering luck, but we do not have team clustering data readily available going back through the channels of baseball history. With that in mind, run differential is one of the best tools we have on hand to evaluate team strength throughout baseball history.

I wanted to see how this stretch of Cubs baseball compared to all other five-year stretches by every National League team from 1994 through this season (I chose 1994 because that was the start of the modern playoff structure). The following plot shows the distribution of five-year run differentials: 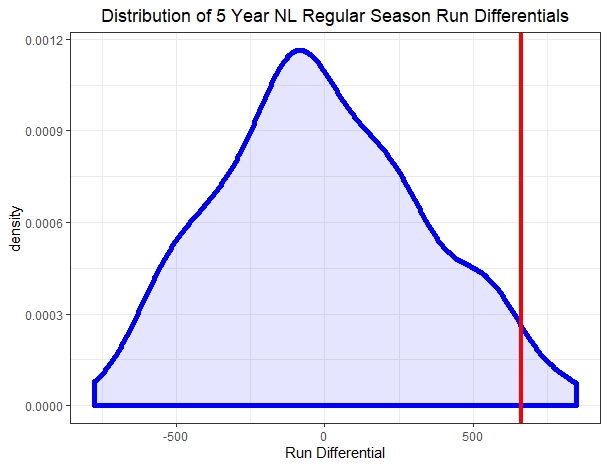 The red line represents the Cubs’ run differential from 2015 through 2019, which was 662 runs. This was one of the top figures over any five-year stretch for any National League club. The following scatter plot highlights the only clubs who outscored their opponents more than the Cubs during this most recent five-year window: 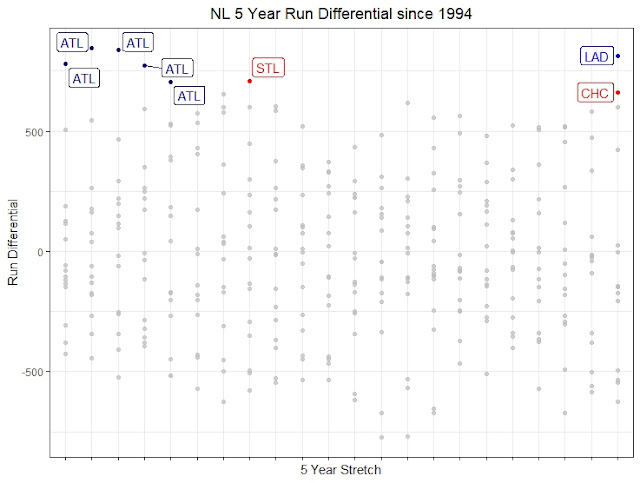 The only groups that outperformed the 2015-2019 Cubs was every five-year stretch from the Braves starting in 1994 through the time period starting in 1998 (with teams headlined by the vaunted trio of Greg Maddux, Tom Glavine, and John Smoltz), the 2001-2005 Cardinals, and the 2015-2019 Dodgers. The 2000-2004 Cardinals and 2014-2018 Dodgers were just behind this Cubs group. These teams, not including the Cubs, combined for six NL pennants, two World Series wins, and 13 NLCS appearances. Given the quality of these teams, one might expect them to have collected more than just two World Series trophies (three if you include the Cubs).

This discrepancy in results versus expectations can be attributed to the randomness associated with the playoffs. A five- or seven-game series is not enough games to determine the better team. The Cubs have put together one of the most dominant stretches of regular season baseball in the last five years. Even in this year, a disappointing campaign, the Cubs outscored opponents by 97 runs. They have just as much hardware to show for it as any of the other great National League teams in the Wild Card era. All of the hand-wringing over the Cubs and their future is overblown, as they will largely return the same group of players. Despite the 84 wins, the Cubs should still be the National League Central favorites going into next year. Save your Cubs obituaries for the future.

Mechanical engineering major at the University of Connecticut. I really wish Mike Trout played on a good team.

First of all, there was only one World Series win among those groups (two including the Cubs’ 2016): the 1995 Braves. Although, you strangely still got the number of NL Pennants correct (’95-’96, ’99 Braves, ’04 Cardinals, ’17-’18 Dodgers). Second, just because the Cubs had a great 4-year run doesn’t necessarily mean it will continue. Due to their inability to develop their own pitching, they’ve been forced to rely almost exclusively on free agency and trades to patch together their pitching staff every year. It’s now caught up to them, and their pitching problems are likely to only get worse… Read more »