The pitcher/catcher (battery) and the hitter are trying to balance a guessing game of what their counterpart is thinking with their own capabilities to develop a decision or expectation about the next pitch thrown.

The battery is trying to strike the delicate balance of a pitch that will result in a strike or an out (usually by being put into play) and give the hitter the least opportunity to get on base. The hitter is trying to anticipate that decision to maximize their ability to react successfully. This becomes circular, since the hitter’s ability to anticipate correctly improves their ability to get on-base, which changes the calculus and pitch decision for the battery, which changes the hitter’s ability to anticipate correctly. Just like the nuclear stand-off of the Cold War, a low-and-inside slider hit into the gap or a Soviet Sarmak from Siberia shot down by Star Wars lasers. Same thing, right?

Pitcher: I should throw this.

Hitter: I will anticipate this.

Pitcher: Then I should throw that.

But it’s not – because baseball is fun and the Cold War was humans (not) trying to murder each other by the millions. Instead let’s say pitch selection is just like keeping secrets from your Friends:

Given this stand-off of anticipation, the battery can take one of two approaches:

2.) Sequencing pitches that build on each other to keep the hitter off balance.

This is the old pitching-coach speak of “changing the hitter’s eye level, keeping him on his heels, and mixing speeds.”

I’ll endeavor to do more work on the effectiveness of these pitch sequences, but we can start by looking at their prevalence. Do pitchers revert to predictable patterns? Are there common 1-2-3 combinations of pitches based on empirical observation? To explore this, I built the 3 Pitch Paths Tool below, which analyzes pitches from the 2018 major league season to try to determine patterns and probabilities for “what’s he going to throw next?”

Click here to go to the 3 Pitch Paths Tool: 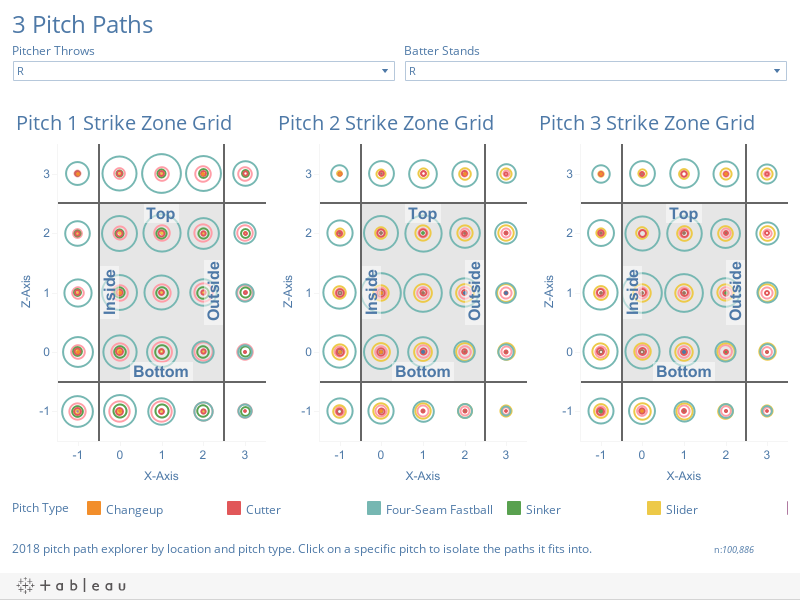 What can we learn from this?

There are definitely trends in pitch decisions. For example, after throwing two four-seam fastballs right down the middle, a hitter would be best advised to look for another fastball, but at the edges/outside of the zone and probably a bad pitch to swing at.

In 2018 alone, there were over 76,000 different 3-Pitch Paths observed. To get utility from this insight, it takes focus. Individual batteries have tendencies. The hitter can be aware of the most prevalent 3-Pitch Paths for a pitcher they are facing, and the battery can know their own tendencies so they can defy them. With that in mind, there is definitely a lot more research to be done using the tool.

This article was originally posted at Baseball POP.

A Closer Look at Luke Voit
Don Newcombe and His Likeness: You Be the Judge

I write about baseball because it's fun. My writing is very data-driven, which is often not fun. I aspire to someday write the 'Infinite Jest' of baseball advanced analytics. I'm also a technology transformation consultant and owner of a very shed-y dog.

Member
channelclemente
You can flag a comment by clicking its flag icon. Website admin will know that you reported it. Admins may or may not choose to remove the comment or block the author. And please don't worry, your report will be anonymous.

Thanks Channel! I’m curious what you think is valuable in this way of looking that the game and where it could go. Any suggestions where I should focus next? Also, you can check out more of analysis at baseball-pop.com .