In a previous project, I attempted to determine what types of pitches are most effective in 1-2 and 0-2 counts based on suspicions that wasting pitches was not inherently strategic. I did this by analyzing league average wOBA values of different types of pitches in and out of the strike zone. The findings showed that on average, breaking and off-speed pitches outside of the zone were the most effective pitch to throw in order to minimize wOBA in both 0-2 and 1-2 counts.

While using league-average data produced some interesting results, I was still unsatisfied, since trying to project pitching strategy to a single pitcher doesn’t work when the data is league-wide. My goal was then to write an algorithm that could use a specific pitcher’s career pitching history to analyze the results of each of their pitches and determine every pitcher’s most effective pitch mix.

After a long time writing and editing code, I believe I have written a script that can do just that: evaluate each pitcher who has thrown more than 1,250 pitches since the start of 2019 and determine the wOBA value of each of their pitches at every count.

In order to determine which pitches were significant, I filtered each pitch by location, which was most conveniently divided into “attack zones.” The attack zone chart is seen below. 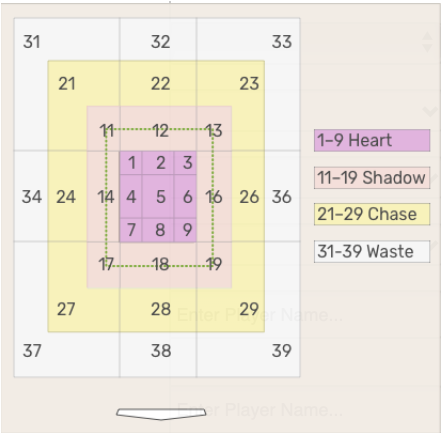 From there I used Statcast pitch data to determine a pitcher’s average wOBA value for each pitch type at each pitch location for every count. In order to calculate the wOBA value of a ball or strike at a given count, I used this slightly out-of-date but still-relevant table of wOBA by count.

*I came up with this very simple calculation on my own but was also assisted by a similar article on accuracy by Connor Kurcon, which did the same thing.

At this point, the only challenge was to write the code in a way that could calculate wOBA for every pitcher (with minimum pitches met) at every pitch, at every count, which proved more time consuming than difficult.

From here I thought the most elegant thing to do would be to compare the strength of each pitch to the percent of the time a pitcher actually throws it. This gives a nice, detailed table of a pitcher’s most effective pitches and the corresponding usage percentages. Here is Clayton Kershaw’s table for 0-0 and 0-2 counts, sorted by usage percentage. 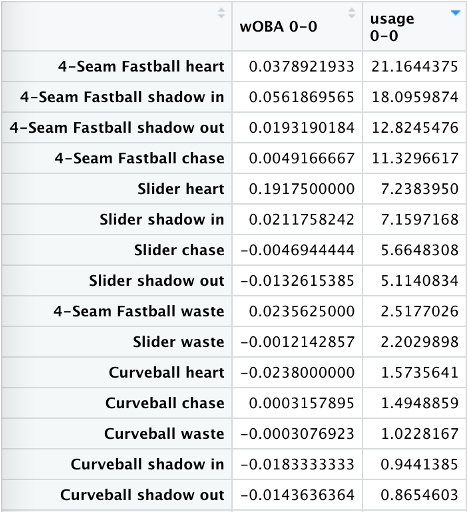 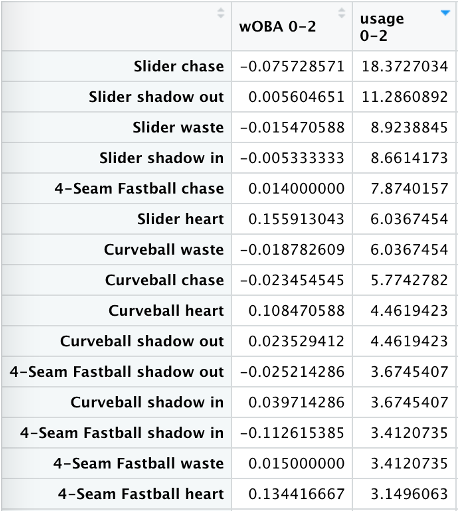 Although these tables are pretty tough to read, there are some interpretations to draw here. Kershaw’s average wOBA does not vary much by pitch in 0-0 counts with the exception of the worst pitch that he throws: a slider in the heart of the zone, which is on average over three times as destructive as his next-worst pitch. This leads me to think that hitters are sitting slider first pitch off of Kershaw and hit well when they get it in the heart of the zone.

Despite this, Kershaw throws his slider in the heart of the zone in 7.2% of all 0-0 counts. He should try to limit this number. Additionally, he only throws his curveball about 5% of the time on the first pitch despite it being an on-average negative wOBA pitch in almost every location. Kershaw is certainly worried about hitters sitting on his curveball first pitch just like they do the slider, and as a result, he gets great results when he does decide to throw the hook 0-0. Kershaw mainly sticks to his fastball (63%) but as the data suggests, he could add more variation considering hitters bat .376 on his 0-0 four-seamer. A more diverse pitch mix as seen in his 0-2 counts could benefit him more.

This brings us to 0-2, where Kershaw’s most common pitch by far is his slider, thrown roughly 53% of the time. Similar to 0-0, when left in the heart of the plate, it is a disaster of a pitch. Furthermore, waste/chase pitches of all types have great wOBA averages because of their value in inducing a strikeout with little repercussion from throwing a ball. As a result, curveballs out of the zone and fastballs at the corners are highly profitable pitches.

With the creation of this detailed wOBA table on counts and pitch type, I could analyze each pitcher individually, but I wanted a way of trying to describe this data cumulatively. If I could create some number that could tell me which pitchers had efficient and likewise inefficient pitch mixes, it could be easier to focus on pitchers with unlocked potential.

In order to do this, I multiplied the wOBA of each pitch by the usage percentage of that pitch, and then I simply summed this number for every count. This gave a number that favored pitchers who had many pitches with low wOBA values, but it also rewarded pitchers for throwing their most effective pitches the most often. Essentially, this number tries to illustrate a pitcher’s ability to understand his effectiveness at each count and then capitalize on it. For the purposes of this article, I will call this number “Pitch Mix Effectiveness,” or PME. Since a lower wOBA is better for pitchers, lower PME values represent a more efficient pitch mix. 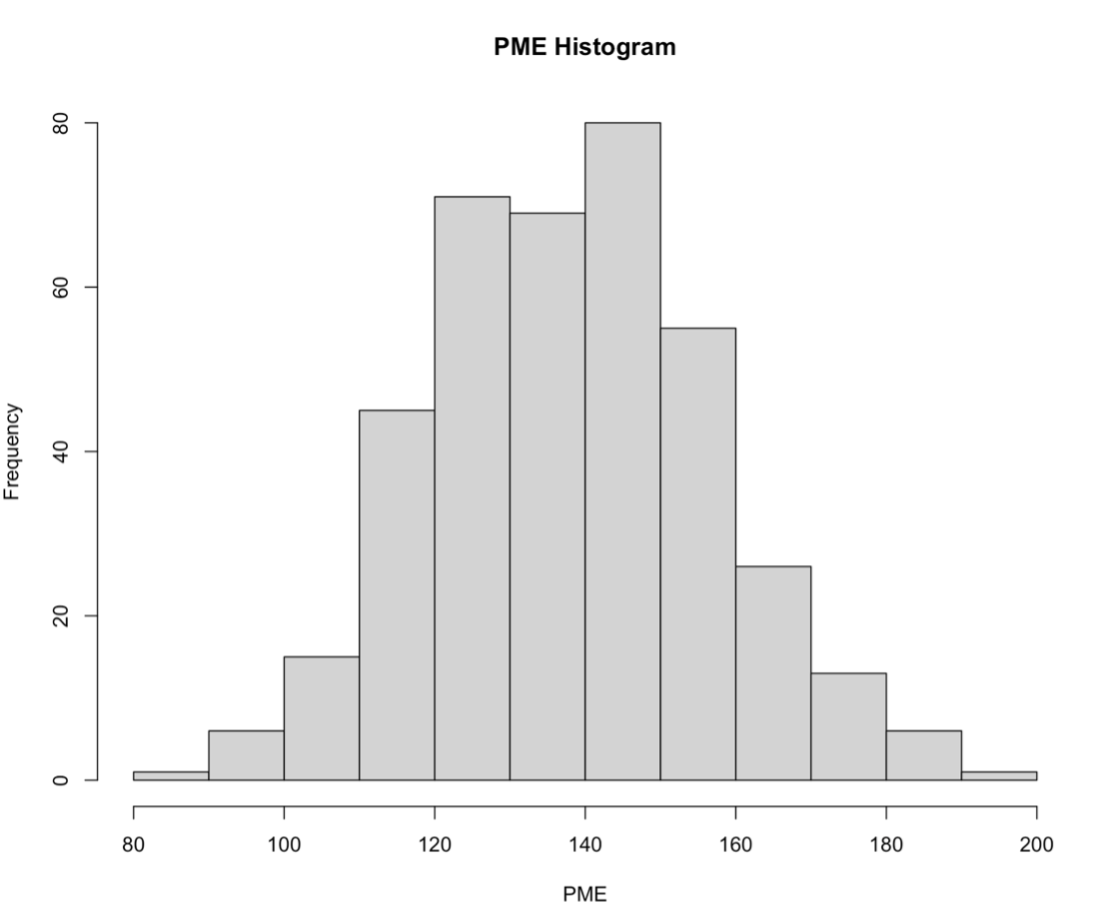 We get a relatively normal distribution of PME values, with some of the usual suspects showing up towards the top of the leaderboard (deGrom, Cole, Hader). As discussed, this is because the best pitchers will have more pitches with better overall wOBAs. However, certain names are pitchers who we do not normally consider as the best in the game. I argue that these pitchers are using their pitches to the best of their ability. 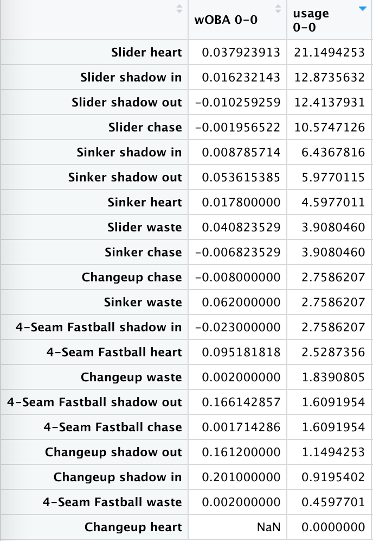 Romo utilizes the effectiveness of his slider and his sinker, and although he does not have a league-leading wOBA, his PME value is much lower than that of pitchers with similar overall wOBA against.

How then can we find players who best maximize their pitch mixes and likewise have the most room for growth? My solution here was to plot pitchers’ PME against their overall wOBA and look at the residuals. Pitchers who have high PME values compared to pitchers with the same wOBA are more efficient.

Here is the plot of PME vs. wOBA: 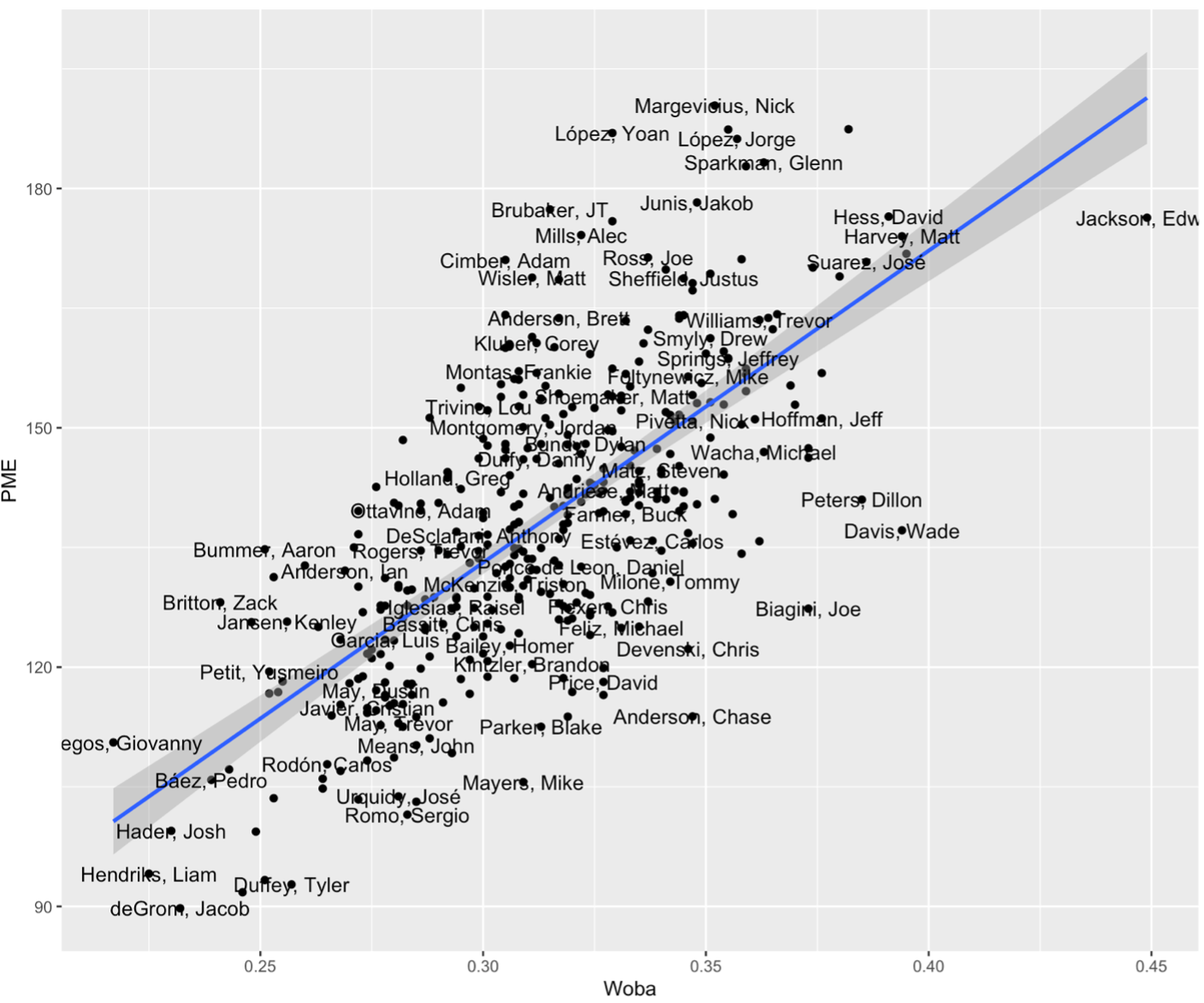 Here are the most negative residuals, representing the most efficient pitchers based on overall wOBA:

And the most positive residuals, representing the least efficient pitchers based on their overall wOBA:

While this analysis is interesting and helps us look more in-depth to pitch usage, it is important not to take these numbers too seriously. For example, pitchers develop certain pitches over time and get more comfortable with them at different counts. Simply because a pitcher has had some success with a pitch over a short period of time does not necessarily mean they should increase that pitch’s usage dramatically. Additionally, some pitches are effective at given counts precisely because pitchers use them sparingly. Increasing that pitch’s usage might deflate its value.

However, the enumeration of pitch mix efficiency and calculating wOBA averages for pitches by count can be useful in trying to avoid harmful outcomes and capitalize on strengths. There is a lot of strategy that goes into pitch mixes and sequencing including, the batter being faced and the situation of the game, but trying to evaluate past success can still be helpful in analyzing pitches. Hopefully this helps people think about the usefulness of understanding pitch mixes and try to do more with the available data.

Member
Member
Joe Wilkey
You can flag a comment by clicking its flag icon. Website admin will know that you reported it. Admins may or may not choose to remove the comment or block the author. And please don't worry, your report will be anonymous.

Great article, just had a clarification question. “In order to do this, I multiplied the wOBA of each pitch by the usage percentage of that pitch, and then I simply summed this number for every count.” This is just a straight sum, right? The reason I ask is I wonder if there’s a better way to do this, since every PA sees an 0-0 count, but significantly fewer get to 3-2. There are five times fewer pitches thrown 3-2 than 0-0 this year. It gets tricky, because if you weight it by number of pitches thrown, you just end up… Read more »

Author
JP Wong
You can flag a comment by clicking its flag icon. Website admin will know that you reported it. Admins may or may not choose to remove the comment or block the author. And please don't worry, your report will be anonymous.

Yes, it’s just a straight sum. I think you make a really good point, that the ability to throw a great 0-0 pitch is definitely more valuable than 3-2 since it occurs more often. However, I thought it best to mark a pitcher by their ability to throw their best pitch in any given situation, since pitchers can only really control what/where they throw the ball. Also I think a pitcher’s ability to understand his “out pitch” and pitches he can throw for strikes (necessary for pitches later in the count) is just as important as 0-0. Thanks for the… Read more »