Peter Alonso Has Adjusted — And Fast

Peter Alonso began 2019 by pummeling a belt-high fastball over the center field wall on the first pitch he saw in Spring Training. He has not stopped hitting since. Over his first 66 games in the regular season, he has slashed .254/.337/.596 with 22 homers and a .382 wOBA. The stats are impressive, but perhaps the most notable aspect of his success has been his ability to modify his approach in short order.

Over the first few weeks of the season, Alonso built an early reputation as a low-ball hitter. Even pitches well below the strike zone were getting sent over the fence. His slugging percentage per pitch by zone reflect this low-ball dominance: 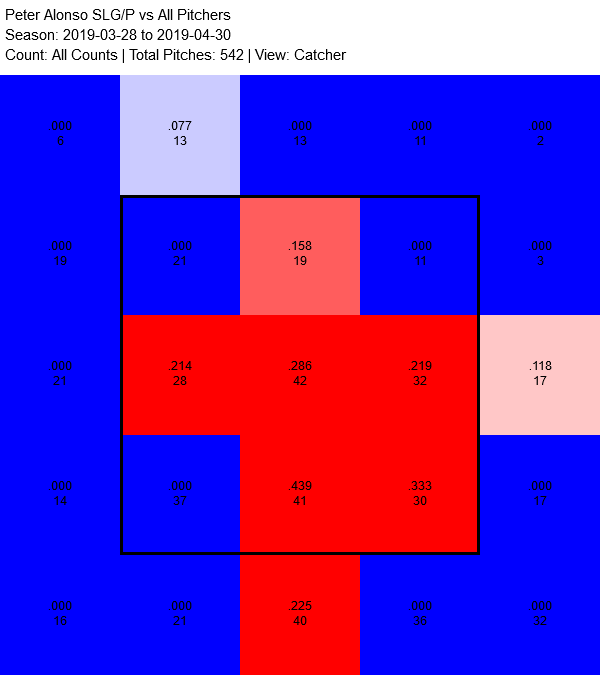 Luckily for Alonso, pitchers had not yet caught on to his affinity for the low pitch. The pitch distribution chart below reveals that he was seeing a plurality of pitches at or below the middle of the zone. 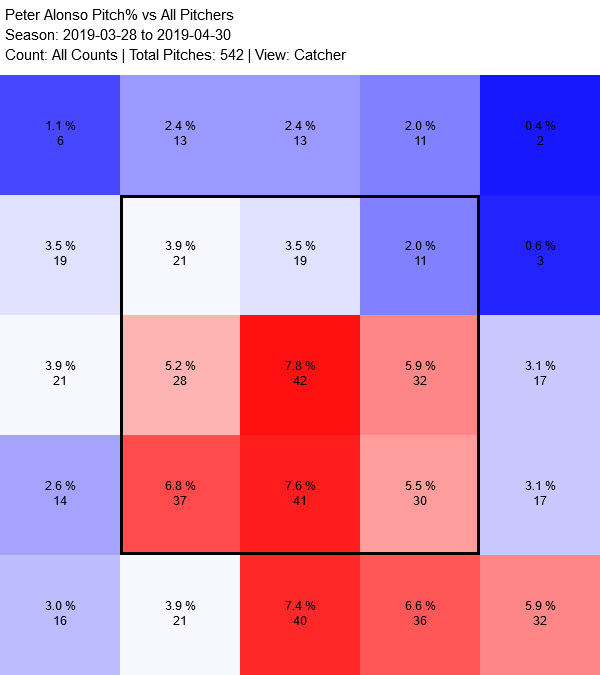 This proved a lethal combination, as Alonso steamrolled his way through April.

In May, pitchers took notice and shifted their focus from low and away to up and in: 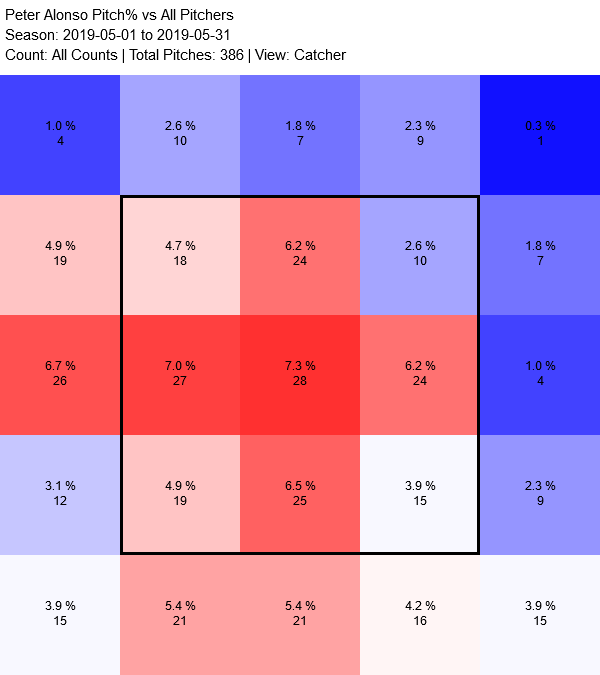 The only problem was that Alonso adjusted too. He continued crushing the low pitch, but he expanded his power zone to include up and in. It was a major change, as the upper-middle ninth of the strike zone became his favorite location: 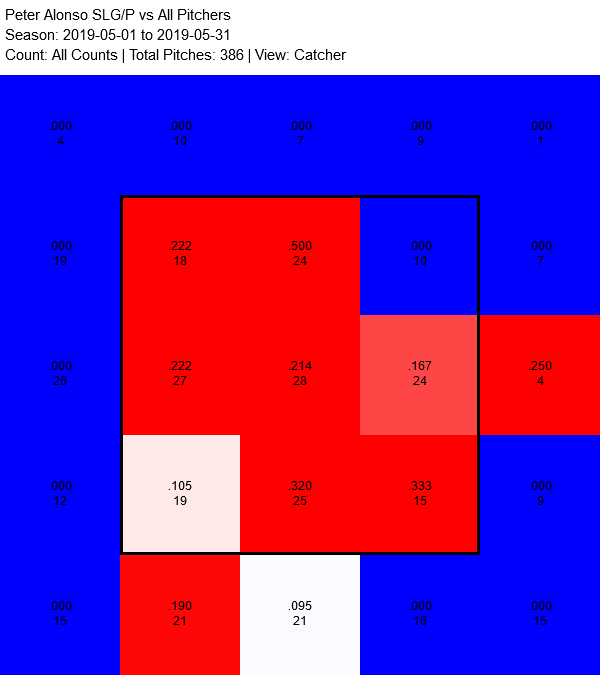 For a rookie to make that kind of adjustment so quickly is quite remarkable. The next question might be what exactly is behind this newfound success on elevated pitches. One possibility is that he is just a great reactionary hitter, and seeing more high pitches in May allowed him to have more success hitting them. However, there is some evidence of a change in approach at the plate that could have played into his improvement. 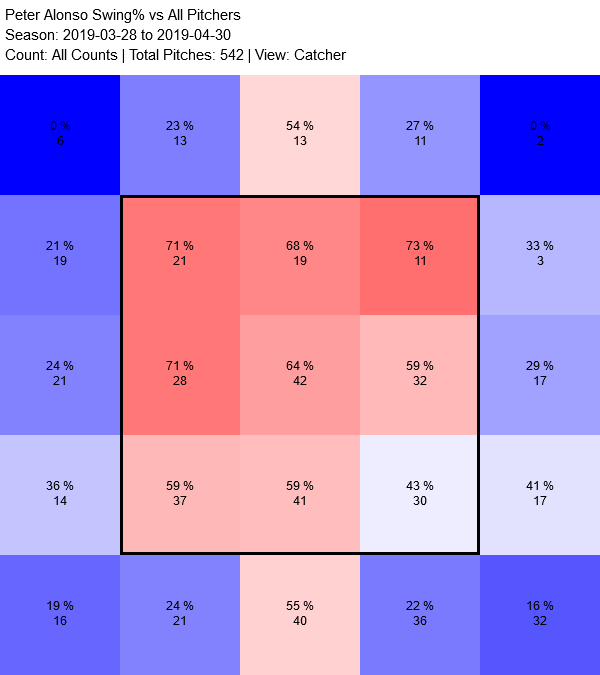 In May, Alonso increased his swing percentage on low pitches, but more importantly, he really zeroed in on pitches in the middle third of the plate: 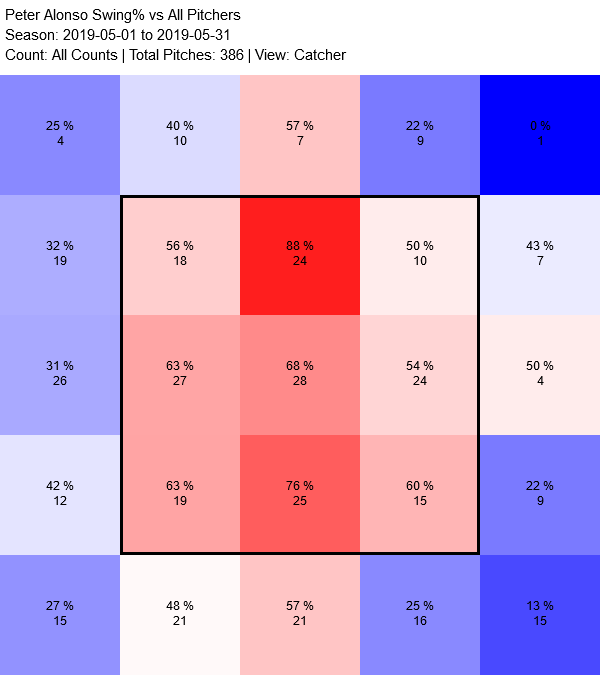 Recall that even in April, he was effective on high pitches in the middle of the zone. In May, his discipline in attacking more pitches over the center of the plate allowed him to maximize his production as pitchers started to attack him up.

As is always the case, pitchers will soon adjust again to his new approach, and hopefully for the Mets, Alonso will be able to counter as successfully as the first time.

Will the Real Brad Keller Please Stand Up?
Mark Canha’s 2019 is No Laughing Matter