To answer these two questions, I’d like to look at Kemp’s swinging strike percentages (swinging strikes per pitch) and contact percentages (contact made per pitch) against all fastballs (four-seamers, two-seamers, cutters, and splitters). Checking to see any differences between 2009 and 2010 should lend some insight into Kemp’s offensive struggles this season.

I ran several regressions to model surfaces of Kemp’s swinging strike percentages and contact percentages as well as his swing zones. First up, let’s take a look at Matt Kemp’s SwStr% against RHP fastballs: 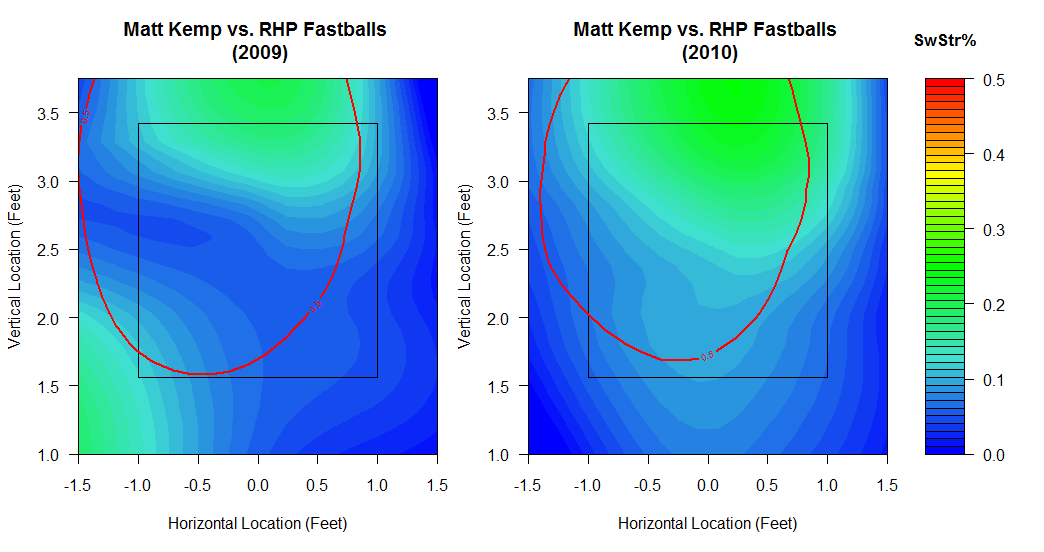 The red contour lines tell us that Kemp chooses to swing 50% of the time when a ball is thrown within the contour line. This is what I call Kemp’s swing zone, so the red circles refer to this. Further examples and explanations of these swing zones can be seen here. What the swing zones tell us here is that Kemp is swinging less at RHP fastballs in 2010, but is whiffing at a much higher rate as well. He is also missing more RHP fastballs down the middle as compared to before.

Let’s check Kemp’s Contact% against RHP fastballs to see if his swinging strikes are affecting his ability to make contact: 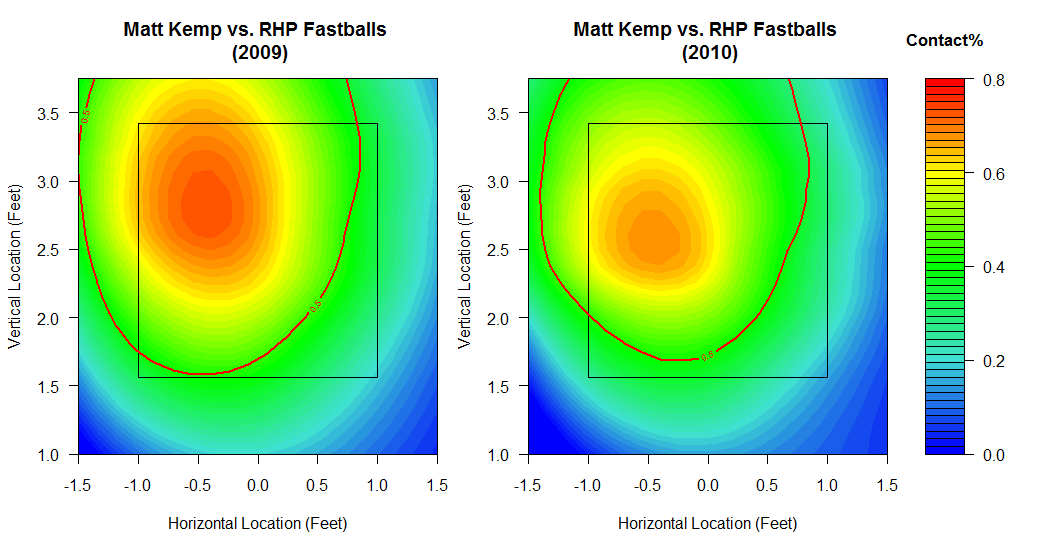 The red contour lines are the same as in the previous two graphs. Clearly, Kemp is making a lot less contact off RHP fastballs, and this tells me that he is putting the ball into play less. The previous two show Kemp swinging and missing more, while these two show Kemp making less contact, particularly on high inside fastballs. Let’s take a look at how Kemp has been doing against LHP fastballs, first at his SwStr%: 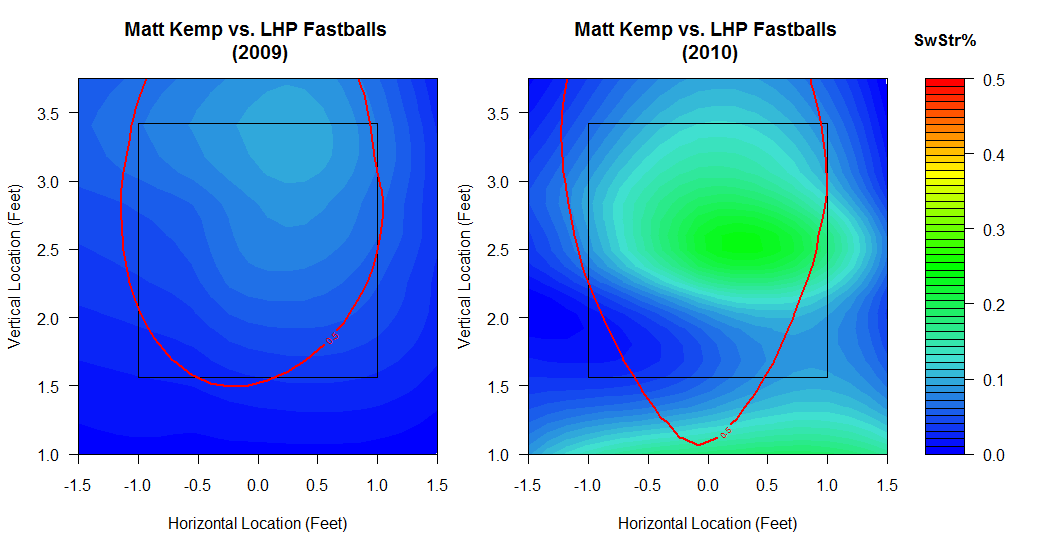 Here are his swinging strike plots, Kemp has actually started to swing more on LHP fastballs down and out of the zone (the red contour lines dip in 2010), so his swinging strike rate there is up. But he is also missing a lot more LHP fastballs this year that come down the middle over the plate, ideal pitches for the right-hander to hit out of the park. This is particularly concerning when you consider that Kemp’s wFB/C (runs above average per 100 fastballs) was at 1.64 last season, while that number is down to 0.38 this season. A major part of that drop must have to do with Kemp whiffing on fastballs down the middle that he used to hit. 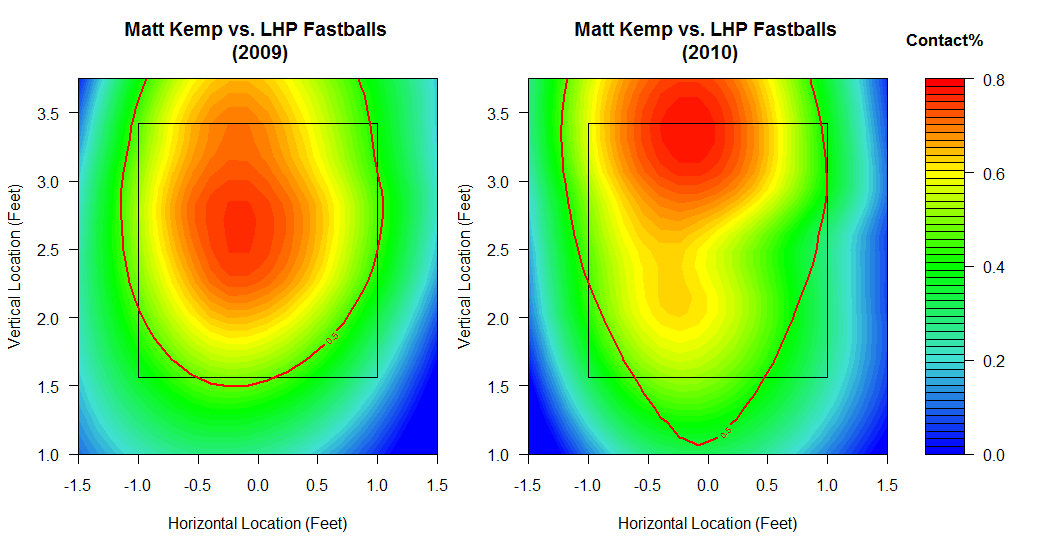 Looking at his contact plots, we see similar colors in where he makes the most contact (making contact 80% of pitches in those areas). But we notice a huge shift in where the epicenter of that hotspot is. Last year, Kemp made contact off a lot of LHP fastballs down the middle of the plate, but this year, the epicenter of that contact hotspot has shifted a full foot up from the direct middle of the zone to the top of the zone. We can infer that Kemp is making less contact off the sweet spot of his bat, and making more high fastball contact that usually result in pop outs. This is problematic and adds further evidence that Kemp is simply missing fastballs down the middle as well as chasing high fastballs.

In general, what I present here is what Dodgers’ fans already know: Kemp is swinging and missing a lot. But I hope that I was able to demonstrate clearly how Kemp has been struggling against fastballs, showing where he is whiffing on them and where he is making less contact.

An article over at Memories Of Kevin Malone convinced me that perhaps Kemp’s whiffing behavior this season (along with swinging less and drawing more walks) could have been caused by Kemp’s change in swinging mechanics. Finally, if you visit my blog at Think Blue Crew, you can read a longer post about Kemp’s offensive struggles against breaking balls as well.

A variation of this article was originally posted at Think Blue Crew, a blog dedicated to data visualization of baseball, basketball, and football statistics. Check it out for more f/x visualizations like this.

Albert Lyu (@thinkbluecrew, LinkedIn) is a graduate student at the Georgia Institute of Technology, but will always root for his beloved Northwestern Wildcats. Feel free to email him with any comments or suggestions.

Guest
tdotsportts1
You can flag a comment by clicking its flag icon. Website admin will know that you reported it. Admins may or may not choose to remove the comment or block the author. And please don't worry, your report will be anonymous.

Cool graphs, nice read. I have only one question though, you stated “Usually, drawing walks and getting struck out are thought of as tradeoffs, opposite ends of the “patience scale.” For a hitter like Kemp (historically high K rate couple with low contact %) is it really surprising that he is walking more WHILE striking out more? To walk, you have to work deep into the count, and flirt with 2 strike counts also, where he is racking up the K’s. That doesn’t seem counter-intuitive to me. A low contact hitter working the count WILL almost always strike out more,… Read more »

Guest
yefrem
You can flag a comment by clicking its flag icon. Website admin will know that you reported it. Admins may or may not choose to remove the comment or block the author. And please don't worry, your report will be anonymous.

excellent swing analysis over at memories of kevin malone (see link). kemp is definitely striding away from the pitcher this year, and pulling his hips out. not good. did he take a bad HBP at some point this year?

Guest
brendan
You can flag a comment by clicking its flag icon. Website admin will know that you reported it. Admins may or may not choose to remove the comment or block the author. And please don't worry, your report will be anonymous.

Is it correct to group splitters with 2,4 seam and cut fastballs? I would classify a split-finger fastball as an off-speed pitch, and group with other changeups. It typically is significantly slower (more so than a cutter) and has a big downward break.