Julio Teheran’s career has been one largely defined by consistency. Over his seven full seasons in Atlanta (2013-19), he never made fewer than 30 starts or threw under 174 innings, with ERAs between 2.94 and 4.49. Arguably the most defining element of his reliability was how he consistently out-performed his peripheral numbers. In each of those seasons, Teheran considerably out-pitched both his FIP and xFIP, often by close to a full run.

But the most worrying sign for Teheran is that this is not a continuation of the previous problem. His walk rate for 2020 was 10.7%, still worse than his career average, but a slight improvement on the previous two seasons. What’s particularly alarming is that his strikeout rate plummeted to just 13.4%, while no pitcher in baseball with more than 100 batters faced had a whiff rate lower than Teheran’s 14.6%. Teheran was only hit slightly harder than previously; while his 38.7 hard hit % was notably higher than 2018’s 36.7% and 2019’s 35.4%, his average EV allowed was only slightly worse than league average at 89.0 mph, identical to his 2019 season. When paired alongside his inability to miss bats though, this high volume of hard contact led to disastrous results.

It’s not exactly groundbreaking to suggest that missing bats and limiting hard contact are both key factors for a pitcher’s success. What’s fortunate for Teheran though is that he may actually have the tools to improve his fortunes regarding both factors. A key component of Teheran’s past seasons, and a considerable part of why he’s been able to consistently outperform his FIP and xFIP, has been suppressing quality contact despite a limited swing-and-miss profile.

As has previously been discussed on FanGraphs, Teheran’s sinker was one of the best such pitches in the major leagues in 2019 in part due to its ability to induce weak fly balls. In 2020, very little changed. While not quite as dominant as 2019, his sinker still produced just a .320 wOBA and .351 xwOBA, with his four-seam fastball being hit to the tune of a calamitous .572wOBA and .538 xwOBA. What’s particularly remarkable is that this season was just the first of his career in which he utilized his sinker more frequently than his four-seam fastball, though his reduced reliance on his four-seam was of no benefit regarding its effectiveness. When viewed below alongside his dramatic decline in velocity, it becomes increasingly clear that his four-seam fastball perhaps needs to become a thing of the past. 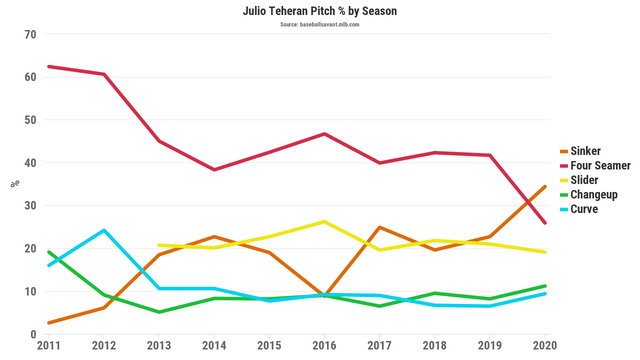 While it’s easy just to suggest that he increase the prominence of his sinker, it’s important to understand the context of when it’s thrown. Sinkers are well-known for typically having considerable platoon splits, and as a result, are largely thrown to same-handed hitters. Teheran followed a similar trend, at least until 2020 anyway, as his sinker had so far shown only slightly diminished results against LHH.

It’s not just enough though to identify that his sinker is effective in itself. If the argument is going to be made that he further commits to his sinker at the expense of his four-seam, then it’s important to directly compare the two. Of all the pitchers to have thrown both fastball types at least 20% of the time in 2020 (min 50 batters faced), no pitcher has a bigger difference in wOBA between the two pitch types than Julio Teheran, and by quite some distance, while only Joely Rodriguez has a greater xwOBA difference. When considering the effectiveness of his sinker relative to his four-seam, a strong argument could be made for Teheran effectively eliminating his four-seam against all hitters, regardless of handedness.

Having identified a method of potentially reducing the quality of contact conceded, the next challenge is to identify how to improve his miserly strikeout rates. Luckily for Teheran, he may have multiple usable breaking balls in his locker. As shown earlier, Teheran’s slider has been almost exclusively his primary secondary pitch, at times even being thrown more frequently than his outstanding sinker. While previously a largely successful pitch, his slider has completed deserted him in 2020, with just four strikeouts on the pitch all season despite being thrown 109 times. In fact, a plausible argument could be made that his curveball, a pitch he has largely abandoned for his slider, may potentially be his best put-away pitch.

His slider has clearly been his preferred put-away pitch, however his curveball’s impressive whiff rates suggests that it should be a considerable weapon for him in two-strike counts, especially given he did not give up a single hit on the pitch in 2020. Despite this, he threw only eight two-strike curveballs all season, resulting in one strikeout and none put in play. Instead, 31 of his 54 curveballs this season have come at 0-0, used primarily as a get-me-over pitch early in counts. What’s also unusual about Teheran’s curveball is that it’s thrown largely to left-handed hitters, preferring heavy slider and sinker usage to right-handers, a consistent trend throughout his career, with his usage rates below.

This usage pattern may potentially obscure his curveball’s effectiveness somewhat, given that breaking balls are widely regarding as being more effective against same-handed hitters. Likewise, his extreme reluctance to utilise it in two-strike counts reduces the likelihood of inducing chases, and in turn whiffs, as hitters are far more swing-happy in two-strike counts. Inversely, his slider sees a sizable jump in usage in two-strike counts and against same-handed hitters, typically the most favourable situations for breaking ball usage. Despite this usage pattern, Teheran’s curveball has resulted in better xwOBAs against right-handed hitters in each of the past five seasons and better whiff rates against them in each year bar 2020, suggesting that the differences in outcomes between the two pitches is at least partially due to situational usage rather than pitch quality.

Finally, the last thing to consider is why his slider has experienced such a dramatic decline in effectiveness this season. In 2020, 64% of his sliders were thrown against RHH, compared to 70% in 2019, while 53% were in two-strike counts, 45% in 2019. That would appear to confirm that his slider’s poor outcomes were not contextual, but rather directly related to the pitch’s quality.

On the surface, there appears to be no discernible change to the quality of Teheran’s slider either. Statcast defines average as the average of all other major league sliders within +/- 2 mph of velocity and with an extension and release point within +/- 0.5 feet. Teheran’s slider has below-average vertical break and far below average horizontal break for a pitch of such a profile. While it’s not a particularly impressive movement profile, there’s very little, if any, change from previous seasons, suggesting that its reduced effectiveness is not tied to pitch quality. The biggest clue comes from examining his location and the plate discipline of opposing hitters.

Here we suddenly see some very drastic differences. Firstly, Teheran has been far more aggressive at throwing his slider within the strike zone in 2020, with a huge uptick in his zone percentage. That approach hasn’t exactly worked well for him though; incredibly, he only generated a single swing-and-miss on 53 sliders inside the zone this season. Encouragingly, he has actually been able to increase his ability to make hitters chase sliders outside the zone, however this has also come with a dramatic fall in his out-of-zone miss rate. With no related decline in stuff, the most reasonable hypothesis would seem that his inability to miss bats is more so stemming from throwing a significant number of sliders in extremely hittable locations. Below we have the location of Teheran’s sliders, first 2019, then 2020. 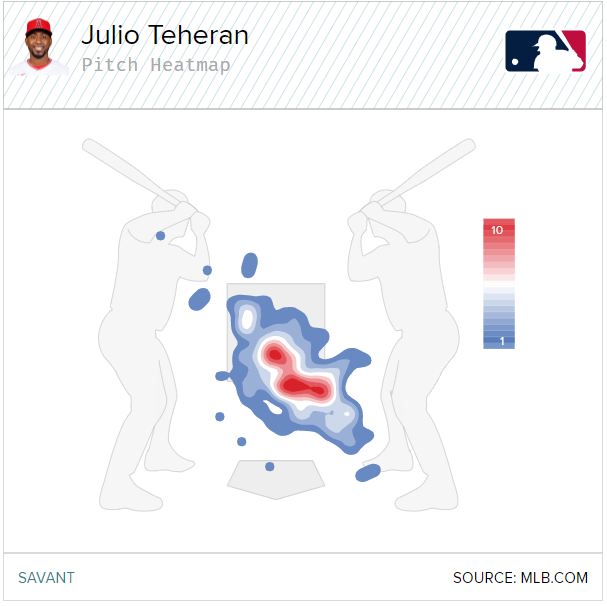 Depending on how generous you’re feeling, this could be described as either problematic or downright disastrous. In 2019, Teheran had a very classic slider profile, consistently locating his slider down and away to right-handed hitters and down and in on the rare occasion he went to his slider against a left-hander. In 2020 though, his approach, whether consciously or unconsciously, changed dramatically. There are very few pitches outside the strike zone, particularly below the zone, with very little between-pitch consistency. What’s most troubling is that the two red hotspots are not only significantly smaller, but also both largely within the strike zone, particularly one right down the heart of the plate.

Only 13% of pitchers with more than 50 sliders in 2020 threw a higher percentage inside the zone, but this group contained some of baseball’s most prominent slider hurlers, such as Adam Ottavino and Matt Wisler, whose extremely high usage rates require them to frequently throw sliders for strikes. Indeed, 84% of that group had a higher slider usage rate than Teheran’s 19.1%. The quality of Teheran’s slider is far from the company of that group, as reflected by his single swinging strike inside the zone this season, and it’s abundantly clear that his slider requires being thrown outside the zone to be effective. This is further evidenced by the batted ball profile of the pitch.

His slider wasn’t hit any harder in 2020, but what’s particularly telling is how lofty batted balls were off the pitch. Throwing a much greater number of strikes resulted in an average launch angle almost 10 degrees higher than previous years, with a similarly plunging groundball rate, primarily leading to an increased fly ball rate. This is likely directly related to the elevated location of his slider in 2020, given the aforementioned finding of a much greater rate of sliders over the heart of the plate rather than below the zone. While there are understandable reasons for wanting to throw a greater percentage of pitches within the strike zone, the limited quality of Teheran’s slider leaves him giving up considerable damage on such pitches.

In summary, while Julio Teheran had an undoubtedly poor season, there are still clear paths to potential improvement in 2021. But it’s apparent that repeating the same processes as this season will likely fail to see any different results. That being said, Teheran may have been somewhat unfortunate to have been playing on the Angels, whose outfielders were worth a league-worst -24 Defensive Runs Saved. Indeed, only two pitchers in the majors (with more than 25 flyballs), Chad Kuhl and Rick Porcello, had a higher BABIP on flyballs than Teheran’s .217.

First and foremost, it has become increasingly apparent that his four-seam fastball may have reached the point of no longer being a serviceable big league pitch. While he has reduced his usage of the offering in recent years, likely with an awareness of its declining velocity and effectiveness, the vast difference in quality between his four-seam fastball and his sinker would indicate that it may be worth more or less abandoning the pitch entirely. Furthermore, his curveball shows significant promise as a valuable secondary option, despite largely being used as just a 0-0 pitch. Utilizing it more frequently in two-strike counts and against right-handed hitters may further highlight its effectiveness, along with increasing his strikeout and whiff rates. Finally, Teheran’s slider appeared to desert him in 2020, despite having almost identical movement characteristics to previous seasons. This change in fortune appears to almost entirely derive from significantly worse locations, with a much greater percentage of sliders left over the plate, resulting in far more flyballs and almost entirely eliminating swings and misses on the pitch.

Ultimately, there is still a path for Julio Teheran to return to being a viable major league starter. His track record of durability will still be a significant attraction come free agency, and while he very likely won’t receive a similar contract to the one he had this season with the Angels, it’s very plausible that he pitches his way back onto the end of a major league rotation in 2021.

Luke Mitchell is an Australian soccer analyst and formerly an intern with the Los Angeles Angels.