Is Zack Greinke Throwing Too Hard?

Before Game 3 of the ALDS, Zack Greinke answered eight questions in just 67 words. The former Cy Young winner would soon be starting his 12th career postseason game. Earlier in the season, Greinke had been the main piece in the biggest deal of the deadline, joining the Astros and making them almost unanimously the best team in the league. Fifteen of the 32 FanGraphs writers who made a prediction on the World Series winner chose Houston. On July 30th, the Astros had a 24% chance of winning the World Series. On July 31st, that number had increased to 26.4%. To put that in perspective, the Nationals had a 4.7% chance.

However, Greinke will be the first to tell you that with success and high expectations comes media attention. Greinke had gone from an overperforming and small-market Arizona Diamondbacks team to an absolutely stacked Astros team. Houston was “World Series or bust,” especially now that they had sacrificed some of their future for Greinke. Before Game 3, the media crowded around Greinke to try to get answers and information about the big game. He did not oblige. They got eight answers but not much information from any of them.

One of those answers stated that the game was just a normal game. However, for Greinke, his performance was anything but normal. During that contest, Greinke would surrender six runs in 3.2 innings. Greinke’s mental ability to deal with a postseason game and the pressure that comes with it was questioned and became a major storyline due to the interview. In Game 1 of the ALCS, Greinke gave up three runs in six innings, which isn’t bad considering the Yankees lineup. However, for Zack Greinke, it is disappointing, frustrating, and it continues a recent narrative that he cannot handle the postseason. The postseason comes with a lot of added pressure and adrenaline, which can sometimes cause pitchers to throw harder. However, this is not always a good thing, as we have seen this year with Greinke.

Greinke averaged 90.5 mph on his fastball in Game 1 of the ALCS, but he only averaged 89.9 mph in the regular season. This difference may not seem like much, but in the postseason since 2017 through Game 1, hitters posted a .533 wOBA on Greinke’s fastballs above 90 mph. He has only thrown 15 pitches above 92 mph in that time, five for balls and none for a swing-and-miss. This postseason, he has thrown three such pitches. One was a Willy Adames double, one a Gary Sanchez single, and the other a ball to Giancarlo Stanton. Below is a graph I overlayed from Baseball Savant. The red represents his fastball velocity over the years, while the blue represents his horizontal movement and the green represents the rise on the pitch. (The Y-axis labels only apply to velocity)

As he started to throw slower, he also increased his horizontal movement and his fastball had much more sink. This is the pitcher that Greinke has become. Sometimes Greinke will try to rear back and throw harder, especially during the postseason. Most of the time Greinke does this, it actually decreases his effectiveness. 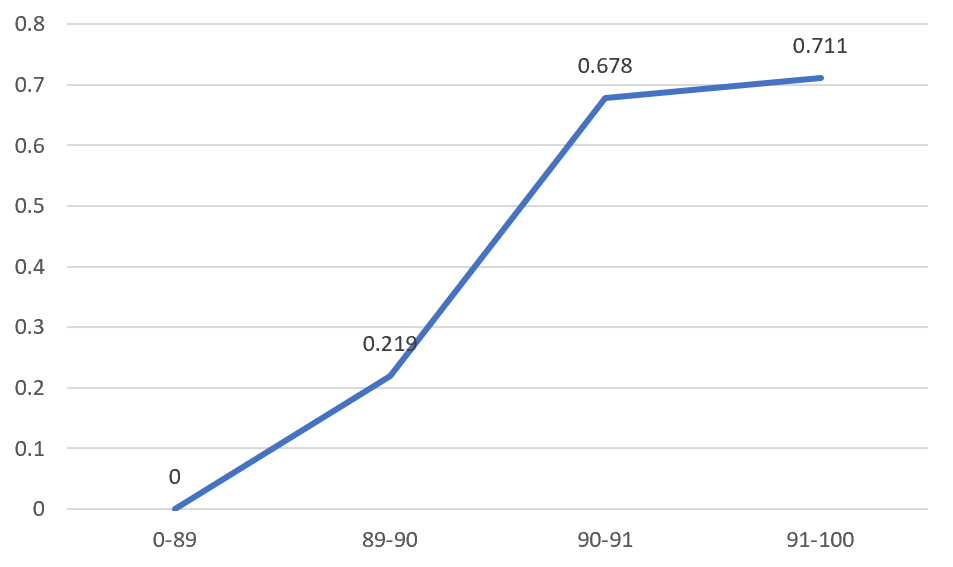 Above is a graph I created that shows Greinke’s 2019 wOBA against on varying four-seam fastball velocities in his first two 2019 postseason games. In the first two starts of the postseason, Greinke has thrown especially hard in two-strike counts. 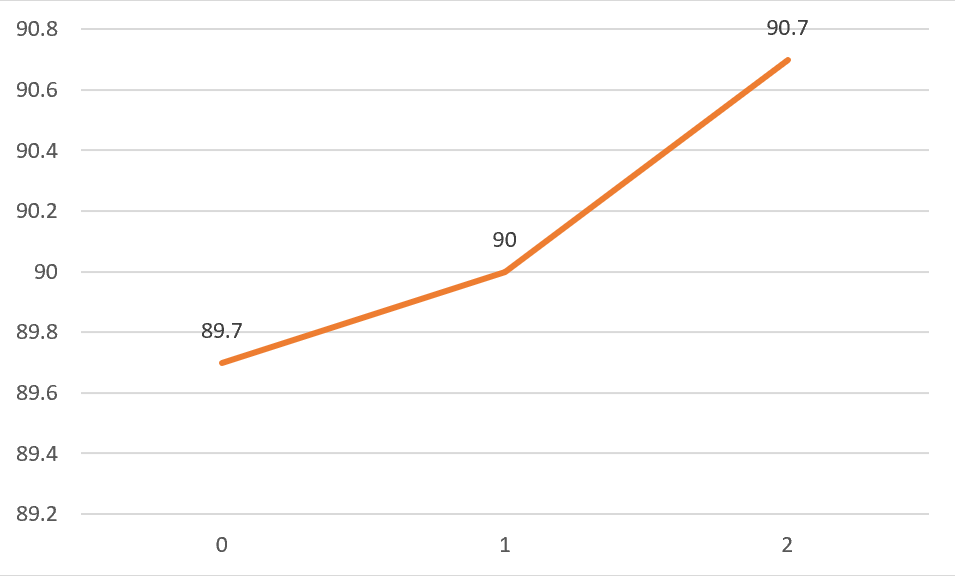 Above is Greinke’s four-seam fastball velocity in mph based on how many strikes there are in the count in his first two playoff games. Against two-strike four-seam fastballs, hitters posted a .622 wOBA. None of the two-strike fastballs that they have put in play against Greinke have resulted in outs. On four fastballs that have been put in play with two strikes, they have had an average pitch velocity of 91.5 mph. And the only pitch under 90 mph, an 89-mph fastball to Gio Urshela, was the only ball that didn’t travel 200 feet or more. Greinke has actually gotten four strikeouts with the four-seam fastball this postseason, however, the pitches have been significantly slower. Only one of those strikeout pitches was recorded at over 90 mph.

During Game 4 of the ALCS, Greinke was presented with a formidable Yankees lineup and a hostile crowd encircling him. He wasn’t dominant, but he gave up only one run in 4.1 innings, striking out five while walking four and giving up three hits. Greinke didn’t have fastball command in the first inning, as he walked DJ LeMahieu on four straight fastballs below 89 mph and missed with a fastball on the first pitch to Aaron Judge. Greinke scrapped the fastball for a short period of time, going 12 pitches before throwing another fastball.

When Greinke got to Edwin Encarnacion, a great curveball hitter, he couldn’t throw only sliders and had to go back to the fastball. However, Greinke threw four fastballs above 90 mph, including three balls, and walked Encarnacion. With the bases loaded, Greinke would walk Brett Gardner on four pitches, the last two fastballs above 90 mph. Greinke was able to get Sanchez to strike out on the slider and escaped the jam with only one run allowed. The next inning, Greinke was able to throw two fastballs below 90 mph to Didi Gregorius, both in the strike zone. However, he still didn’t have great command of the pitch and missed his spot on 2-0, resulting in a Gregorius single. Greinke was able to settle in and got three straight strikes and a flyout on his next four four-seam fastballs, which had an average pitch velocity of 89.4 mph. 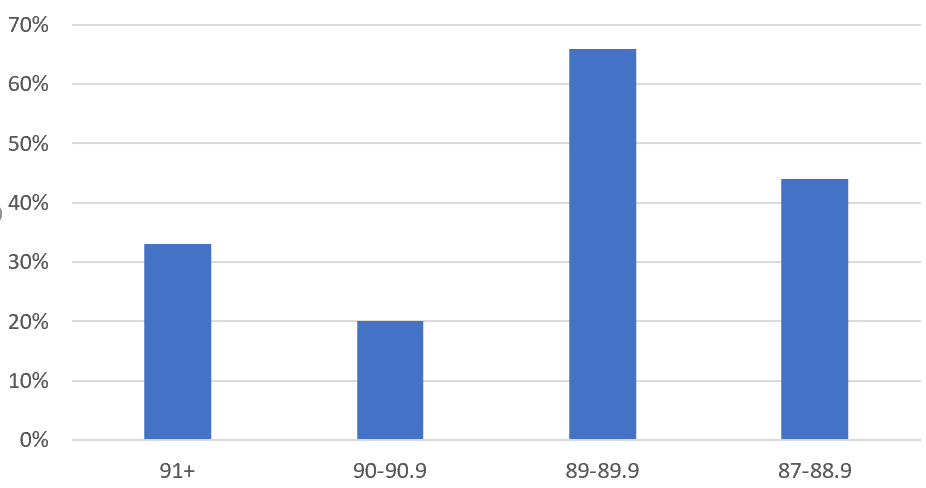 Above is a histogram I made showing the strike percentage on Greinke’s fastballs that game that were not put in play. It seems that Greinke definitely made an in-game adjustment and was able to steady his fastball velocity before the game got out of hand. He may have known about his recent high-velocity struggles and overcompensated in the first inning. It does seem that there is a velocity zone where Greinke’s fastball is most effective. With that in mind, when he pitches in the World Series, the radar gun may be something to focus on.

Playoff Execution: A Look at Asdrúbal Cabrera’s Baserunning Error in NLDS Game 2
How the Nationals Outsmarted Paul Goldschmidt in the NLCS
newest oldest most voted

Member
staub4
You can flag a comment by clicking its flag icon. Website admin will know that you reported it. Admins may or may not choose to remove the comment or block the author. And please don't worry, your report will be anonymous.

Fascinating. I too noticed the adjustment.