Inside Aaron Bummer’s Transformation, or How to Make a Lights-Out Reliever From Scratch

A look at the relief pitcher ERA leaderboard yields names many baseball fans are now familiar with. Felipe Vazquez, Adam Ottavino, and Ken Giles have been in the spotlight before. The breakout seasons for All-Star trio Kirby Yates, Shane Greene, and Liam Hendriks have been well documented. Will Harris has been quietly dominant for multiple years. Even Scott Oberg had 200 innings of respectable relief pitching under his belt entering this year.

And then there is Aaron Bummer. Like most of his teammates on the White Sox who don’t routinely flip their bats into near-earth orbit, Bummer is fairly anonymous to the baseball world at large. Yet he has been without question the best arm in a surprisingly respectable White Sox bullpen, notching 49 innings across 41 appearances in 2019, posting a 1.65 ERA that is good for third amongst qualified relief pitchers.

Bummer is an outlier on this leaderboard in more than name recognition. The names ahead of him are racking up the strikeouts, with Yates posting a 14.58 K/9 to go with his 1.08 ERA while Hendriks holds 12.42 and 1.30 marks, respectively. Bummer averages a measly 7.88 K/9 by comparison. Few other relievers with such stellar ERAs have struck out batters at the low rate that Bummer has.

Bummer has largely accomplished this through an astronomical 68% ground-ball rate, surpassed by only worm-burner sensei Zack Britton. So how did this 19th-round relief-only prospect who topped out at 23rd on any White Sox prospect list turn into a ground-ball machine with one of baseball’s most effective fastballs? Let’s take a look.

Entering 2019, Bummer had accumulated a solid and thoroughly unspectacular 4.36 ERA over 53 2/3 innings pitched between 2017 and 2018. It wasn’t enough to earn him a roster spot out of camp; he didn’t make his first appearance of the season until the 6th inning of Chicago’s April 29th game against Baltimore.

It is now clear in more ways than results that this Bummer is a different iteration than the one who just barely nicked above replacement level for the first two years of his career. First, his fastball velocity has gone up nearly two and a half ticks:

Except in the rare cases where such an increase comes at the cost of losing any semblance of control, such a velocity bump is an easy recipe for more outs. While just a hair above average in the past, Bummer’s sinker now easily sits 3 mph above the relief pitcher league average of 92.6. Step one of being a better pitcher: throw harder. This having been accomplished, he has narrowed his pitch mix accordingly:

The slider that he threw 36.9% of the time as a rookie in 2017 has all but been eliminated, replaced by the cutter that has long been the trademark of White Sox pitching coach Don Cooper. In 2019, he has essentially relied on a sinker and a cutter, with a four-seamer tossed in now and then.

His spike in velocity aside, this is nothing new; it’s always been an effective sinker. Since Bummer’s debut in 2017, his sinker-dominant fastball mix is tied with Justin Verlander for the 15th-most effective in baseball on a per-100 pitch basis among pitchers with an equivalent number of innings. Step two of going from mediocre to great: find what you’re good at — in this case, throwing sinkers — and do that thing a lot more than the things you do less well.

Still, it’s a little more complicated than that. A closer look at fielding independent and batted ball-based numbers shows two things. First, although Bummer is a good pitcher, underlying data believes he has overperformed his true performance (a fair assumption — a sub-2.00 ERA under any circumstance is rarely without considerable luck). The second is that while outstanding results have only come to Bummer in 2019, his true breakout actually came last year:

The batted ball results haven’t come around until this season, but it’s clear that Bummer began to figure some things out before 2019. A K%-BB% increase of 15.2% doesn’t happen overnight. Because of those strong numbers, FIP and xFIP actually believe that Bummer was a better pitcher in 2018 than he has been in 2019. As Bummer began to refine his pitch mix to throw more of his high-quality sinker and cutter, his BB and K numbers adjusted accordingly, spiking his effectiveness by fielding-independent metrics.

But that’s why we have batted ball data, and why it’s useful to know the difference between command and control. Bummer may have begun to learn how to better use his pitches to make hitters miss and not give them free bases, but he was still terrible at avoiding loud contact. It doesn’t matter how nasty your stuff is and how much you can throw it in the zone when hitters can barrel nearly 1 out of every 10 balls they put in play. Breaking down his platoon splits, we can see very clearly where the bottom-line improvements have come this year for Bummer:

Most of the data looks more or less in line with Bummer’s overall numbers, but the massive dropoff in wOBA and Hard Hit percentage stick out like a sore thumb. Until 2019, Bummer had been shelled by right-handed hitters. We do see the same marked improvement in his underlying numbers in 2018, suggesting that he was fairly unlucky.

But even with a sky-high 68% ground-ball rate and a reduced barrel rate more than cut in half, a propensity for allowing hard contact continued to haunt him, as he allowed more than 11 hits per 9 innings on the whole, with righties batting nearly 100 points higher than same-handed hitters at .338. This year, they’re managing a paltry .159 line against him. By batting average, it’s the first time in his career that lefties have fared better than righties.

Why might that be? Velocity and usage are only a part of the recipe for effectiveness. Let’s take a look at where Bummer has thrown his pitches to right handers over the past three seasons: 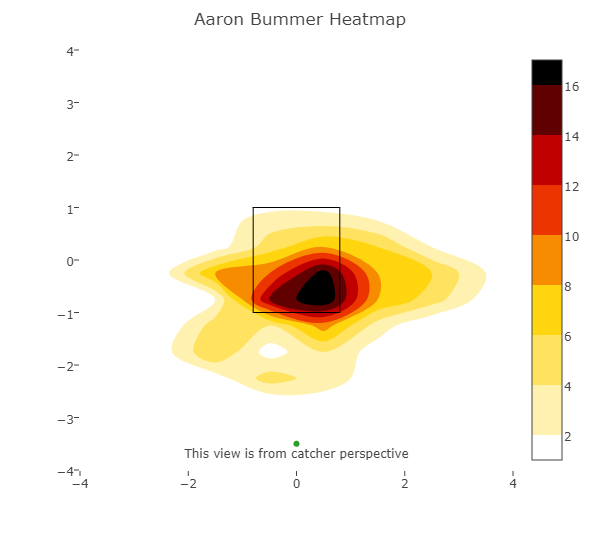 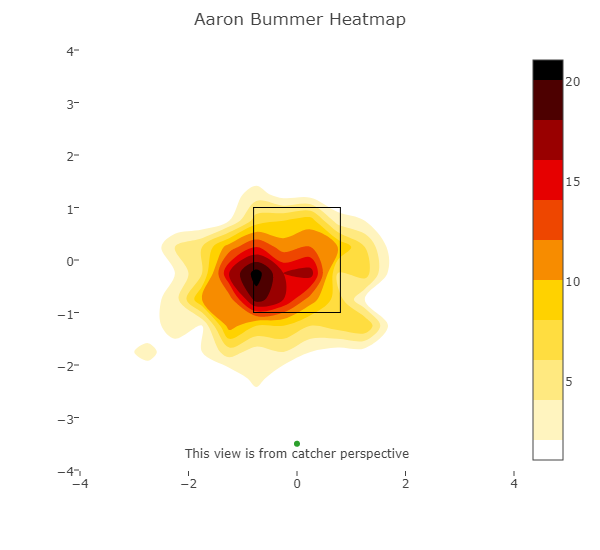 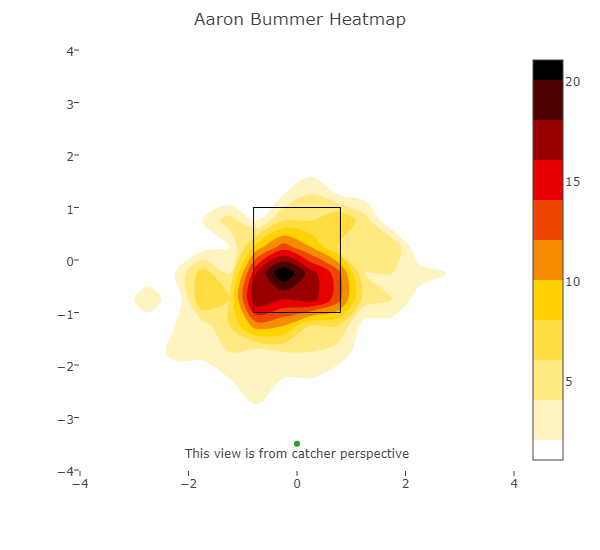 In 2017, Bummer was a cook serving meatballs to righties every time they stepped up for lunch. In 2018, this improved somewhat, moving towards the part of the plate where it was more difficult to put a good swing on Bummer’s new sinker/cutter combo. But he still left too much over the heart of the plate, allowing for enough solid contact to betray his improvements in fielding-independent numbers.

In 2019, those fat pitches are almost entirely gone. Bummer has pounded the inside corner to righties. Logically speaking, it’s a sensible approach being executed effectively. A heavy lefty sinker straddling the inside corner to a righty looks like a brush-back ball for the first 55 feet it travels, until it isn’t. A hard cutter in the same location looks like it’s coming right down the middle, until it isn’t. Both are difficult to make contact with, much less barrel up, in the best of circumstances.

There you have a recipe, straight from the book, for building a more effective reliever. Step 1: throw harder. Step 2: throw more of your best pitches. Step 3: throw those pitches where they’re really hard to hit. It’s a formula that Aaron Bummer has worked to near-perfection in 2019. Unfortunately for the rest of the league’s scuffling relievers, it’s a lot easier said than done. But in an era dominated by high heat and breaking balls in the dirt, the White Sox seem to have found themselves an outlier, in more ways than one.

All tables and charts courtesy of FanGraphs & Baseball Savant

Baseball Has a Glaring Flaw in Its Rules
What’s Next for Chris Archer?