How Telling are a Teenager’s A-ball Stats?

The Charleston RiverDogs, the Yankees’ low-A affiliate, has rostered several of the team’s more interesting prospects this year, with Luis Severino, Ian Clarkin, Aaron Judge, Abiatal Avelino, Miguel Andujar, Luis Torrens, Gosuke Katoh, and Tyler Wade all having spent time in Charleston thus far. A few of these players are still teenagers, and despite having promising potential, are very raw in terms of their overall development. Despite being just 19-years-old, infielders Avelino, Andujar, Katoh, and Wade spent the entire first half in Charleston with varrying degrees of success. Avelino (108 wRC+) hit fairly well before going down with injury, but Andujar (78 wRC+), Katoh (79 wRC+), and Wade (98 wRC+) have looked a bit over-matched at the plate so far.

These players have been facing pitchers two or three years older than them, so it’s hard be too critical of their poor batting lines; and the fact that they’re even playing in full season ball as teenagers is an accomplishment on its own. Still, performance obviously matters, and you’d prefer to see them hit well than not. But it’s hard to know how much weight should be put on their stat lines. Should we be worried that Gosuke Katoh’s striking out 35% of the time? Or should we still be more focused on the tools that got him drafted in the second round last year? It’s a little hard to say.

To get a better idea of what to make of these guys’ performances, I turned to the reams of minor league data compiled over the last couple of decades. Below, you’ll find some heat maps representing the likelihood that a player will play in the majors based on his low-A stats as a teenager. “Average Power” refers to players with an ISO within .025 of their league’s average, and within each panel, walk rate above league average and strikeout rate above league average occupy the X and Y axes respectively. I considered all 321 player seasons where a teenager logged at least 400 PA’s from 1995-2008.

A couple things to keep in mind before I delve into the results:

1) This methodology measures the likelihood that a player made it to the majors and doesn’t take into account how well he played upon arriving. So a player with one big league game is counted the same as a player who went on to have a Hall of Fame-caliber career. A stat that predicts a player’s making the majors may also predict his level of big league success, but that’s not something I attempt to quantify here.

2) This methodology does not account for a player’s defensive skill or position. Obviously, a weak-hitting catcher or shortstop is more likely to crack the majors than a weak-hitting first baseman, but defensive skill is a little hard to quantify for minor leaguers. Prospects change positions all the time and there’s a good chance any given A-baller won’t stick at his current position as he navigates through three more minor league levels.

Overall, there’s not a ton of predictability here: There are examples of players who made it — or didn’t make it — from nearly every corner of every heat map. Players like Rocco Baldelli, Austin Jackson, Jhonny Peralta, and Pablo Sandoval, turned into fine hitters despite scuffling as teenagers, yet plenty of others hit for good power and put up healthy plate discipline numbers, only to flop at the higher levels. Jeff Goldbach, Nick Weglarz, and Mike Whitlock all raked in A-ball, but never made it to the show. Stats alone can’t tell us everything, but there are definitely some obvious trends. Most notably, players who hit for power appear to be much more likely to play in the majors than those who don’t. Completely ignoring strikeouts and walks, 70% players from the high power group made it to the bigs compared to 65% of players with average power and just 44% from the low power demographic. Plate discipline stats seem to matter a little, but power is clearly king.

The heat maps give a nice visual of what’s happening, but don’t really give us a precise estimate of how likely these players are to make it. To better quantify each player’s chances, I ran a probit regression analysis on this group of players. In a nutshell, a probit tells us how a variety of inputs can predict the probability of an event that has two possible outcomes. In this case, it shows that hitter’s strikeout rate, isolated power, and BABIP are predictive of whether or not he’ll play in the majors.

It’s worth pointing out that there are some obvious flaws in this model. As previously mentioned, it doesn’t consider defense, so if an elite defensive shortstop and a lumbering first baseman had the same batting line, they would receive the same probability, which obviously doesn’t seem right. It also doesn’t take scouting reports into account. We all know that there’s more to a player’s potential than his stat line, especially for minor leaguers; and in some cases, a good scouting report is worth more than a dog’s age of statistical regressions. Still, I think it does a good job of slapping an unbiased probability on a player’s MLB chances. For those interested, here’s the R output from my model: 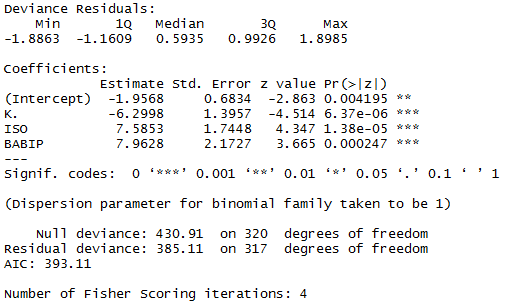 Without getting too technical, the “Estimate” column basically tells us (in Z-scores) how a change in each stat affects a player’s MLB likelihood. As you’d expect, players with higher strikeout rates are less likely to crack the majors, while players with higher power and higher BABIPs have a better shot. Interestingly, walk rate was not statistically significant in predicting whether or not he’ll reach the big leagues. This might be partly due to the relatively small sample of players, but it’s probably safe to say that a player’s walk rate isn’t a make-or-break. Several players — including Erick Aybar, Michael Barrett, Engel Beltre, and A.J. Pierzynski — managed to reach baseball’s highest level despite walking around 3% of the time in their first tastes of full-season ball, while Mike Whitlock and Nick Weglarz fizzled after walking over 15% of the time.

That’s well and good, but what does it tell us about today’s prospects? Here’s what we get by applying my model to all low-A teenagers with at least 200 PA’s (I also included Abi Avelino, who’s logged 131). What stands out to me is how few players are true long-shots. Of the 36 players, two thirds are more likely than not to make it to the bigs and only one player gets less than a 27% chance. If a player’s talented enough to play in full season ball at 19, there’s a good chance he’ll make it to the majors one way or another.

There are some highly-touted prospects on this list, but other than J.P. Crawford, they aren’t among the names listed near the top. Reese McGuire, Dominic Smith, and Clint Frazier all graced top 100 lists in the pre-season, but have had disappointing power outputs this year, which has lead to such mediocre probabilities. Instead, most of the top ranked players are relatively fringy prospects who have broken out in a big way this year.

As for the Yankees’ prospects, the model thinks Avelino has a pretty good shot at making it, but is relatively low on the others. Even so, Andujar and Wade both have around a 50-50 chance, which isn’t too bad — especially when you consider the model ignores their defensive skills. Things don’t look as promising for Katoh, who’s struck out a ton and hit for only modest power. The lone bright spot in Katoh’s line is his 12% walk rate, which unfortunately for him, proved un-predictive of a player’s big league future.

Guest
Bluejays
You can flag a comment by clicking its flag icon. Website admin will know that you reported it. Admins may or may not choose to remove the comment or block the author. And please don't worry, your report will be anonymous.

Thanks for an original thoughtline and enjoyable article.

Glad you enjoyed it. Thanks for reading and commenting.

Guest
Matt Hegarty
You can flag a comment by clicking its flag icon. Website admin will know that you reported it. Admins may or may not choose to remove the comment or block the author. And please don't worry, your report will be anonymous.

How telling are A ball stats for guys in their 20s?

That’s one of the things I plan to explore with a similar analysis in the next few weeks. Thanks for reading!

Member
Member
Mike
You can flag a comment by clicking its flag icon. Website admin will know that you reported it. Admins may or may not choose to remove the comment or block the author. And please don't worry, your report will be anonymous.

Interesting piece. It might also be useful to see how the rates increase/decrease as this group ages/advances. Good work though!

Guest
Bob
You can flag a comment by clicking its flag icon. Website admin will know that you reported it. Admins may or may not choose to remove the comment or block the author. And please don't worry, your report will be anonymous.

Thanks for the research, Chris! Another Chris also had some interesting numbers at BTB several months. At a glance, his work implies that teens in A-ball with a high walk rate are about twice as likely as low BB guys to be productive MLB hitters:

Keep up the good work, sir.

Thanks, glad you enjoyed it! Although it may seem like it at first glance, his work doesn’t necessarily contradict mine. My data actually did show a correlation between BB% and making it to the majors, but it wasn’t statistically significant once I also considered ISO. Basically, it seems like high walk hitters are more likely to make it, but that’s only (or at least mostly) because power hitters happen to walk a lot.

Any way to tweak your analysis to see if players make it and become decent, as opposed to just making it at all?