Hot take: the Astros are good at baseball. This is thanks in no small part to Gerrit Cole’s early success on the mound. After the news broke that the Astros signed the righty, several analysts wondered why they would give up three national top-100 prospects (Musgrove, Moran, and Feliz) for two years of control over what some called a “soft” upgrade at starting pitcher. We found out in a big way. After 8 starts, he leads all qualified starters in FIP (1.56), WAR (2.8), K-BB% (35.6%), and is second only to Max Scherzer in Z-Contact% (75.3%). He has been, to date, (subject to some debate) the most valuable starting pitcher of 2018.

He is not the only bright spot of the Astros’ 2018. 35-year-old Justin Verlander looks to be returning to his 2011 AL Cy Young self. While it is early, he seems to be a promising candidate for this year’s award as long as his teammate Gerrit Cole doesn’t steal it from him. Charlie Morton, once journeyman, has found his home and filed his very own claim to being one of the very best pitchers in the league. I haven’t even mentioned Dallas Keuchel, proud owner of his very own 2015 Cy Young trophy, who is a top-35 pitcher on STATS’ command leaderboard and is finding his way back to his pinpoint control that helped his team win their first franchise World Series in 2017. Oh… also Lance McCullers is filthy. It’s looking like blue skies ahead for the reigning world champs and the beginning of the season only confirmed the rosy outlook. Then, a simple tweet:

If only there was just a really quick way to increase spin rate. Like what if you could trade for a player knowing that you could bump his spin rate a couple hundred rpm overnight…imagine the steals you could get on the trade market! If only that existed…

Ever since Trevor Bauer pointed out the potential source of the increased spin rate of Gerrit Cole, there has been a cloud surrounding the validity of the Astros’ recent pitching success. It’s easy to understand the frustration for someone who claims to have spent a solid five years of his life trying to naturally improve his spin rate. The advantage of a high spin rate has been documented extensively in the literature by people a lot smarter than me, so I’m not going to go into it (plus my last encounter with the subject ended with a B in high school physics). All you need to know is the faster the ball spins, the more it moves in the last few moments before it reaches the hitter, which makes it harder to hit which, as you might guess, a pitcher generally likes.

In the Statcast era, teams are clamoring for every inch of an advantage and detecting small changes in fastball spin-rate is everything. If the Astros really are using some sticky substance (or just training new acquisitions in the art of spinning baseballs), we should be able to detect it in some way. Here are the average spin rates before and after the transition to Houston of some of their finest pitchers:

Just looking at this table, however, can be misleading. Average spin-rates can look a lot different depending on where you split the data. We would never know, for instance, if Gerrit Cole’s spin rate spiked to 2300 the start before moving to the Astros, which got lost in the pure volume of data suggesting a lower overall spin-rate before the move. It is important to understand exactly where this significant change in spin rate occurs.

The key behind detecting significant changes in data is this:

where X is the observed prior data. η here is what’s called a changepoint. Change point detection uses likelihood-based estimation to find the number of different population means (or variances) in a time series. That’s just a mathy way of saying it looks at how likely the data fundamentally changes as some point (or points). Before we can say the Astros are cheating, we should look at if the change in spin rate is really that significant to begin with and determine where that change actually occurs. We’re going to be using Bayesian changepoint detection. The advantages of Bayesian detection as opposed to Binary segmentation are twofold. First, the probability of having a change point is directly proportional to the prior probability of observing the data. This helps prevent overreaction to new information and makes the overall estimation process much more robust, which is especially important in this case. It is tempting to see a big number next to the post-Astros spin-rate chart and jump to conclusions, but it is important to appropriately weight the prior probability of that spike occurring. Second, detecting the changepoint requires a much smaller window of data. This is important in this case as well. If we are correct that the change happens in a 1-game window, i.e. it happens as a result of a game-to-game transition to a different team, predicting changepoints among small data-windows is especially important. Specifically, our algorithm computes the probability of having a particular changepoint configuration as follows:

where π(η) is the prior probability of that configuration and f(X|η) is the likelihood of the observed data given the change point configuration. There’s some other math behind the detection algorithm, but for now we’ll just take a look at the plots. First up: Charlie Morton. 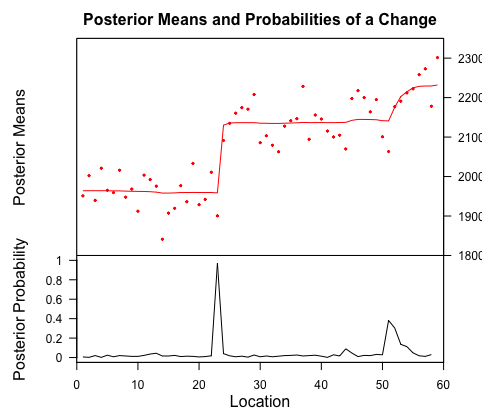 There’s a pretty clear changepoint here. The posterior probability spikes at timepoint 23. That game date is 9/30/2015, a late-September game against the Cardinals, notably while Morton was pitching for the Pittsburgh Pirates. The Astros weren’t even his next team (in November, he was traded to the Phillies). Several analysts weighing in on the spin question have noted that spin rate is positively related to velocity. In an oft-quoted interview with Matt Gelb of the Philly.com:

“For some reason, I just went out there and tried to throw the ball hard one game. I wound up throwing it harder.”

Below is the change-point detection plot for Morton’s velocity. It looks like there was clearly a change during the spin-rate spike. 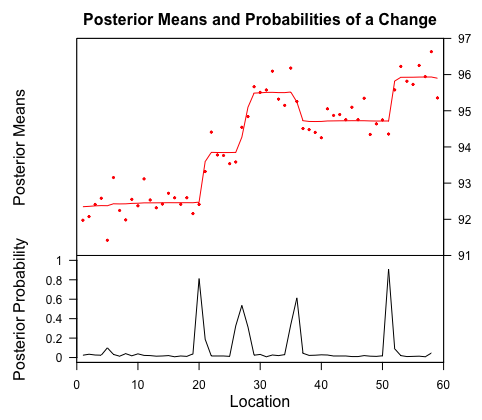 Regardless of the cause, our likelihood-based examination suggests it would be naïve to attribute Morton’s spike to an organizational conspiracy to increase fastball spin with a foreign substance. 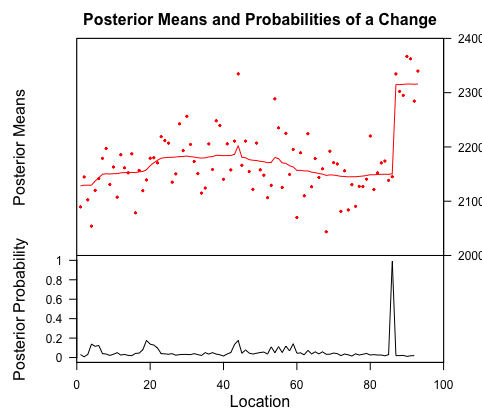 There is a clear spike at time 86, which is the time of his trade. Something has changed. However, look at the spike in spin rate at time 44. This could provide a hint to a given organization that a player is capable of a spike in spin rate given a change in mechanics. There is a 20% probability that that game contained a change point, which would be higher except Cole’s spin significantly declined right after that start. If spin rate is associated with a specific mechanical quirk, not only could that help us acquit the Astros, but also identify potential steals on the free agent or trade market that have yet to harness the maximum potential of their spin rate.

Some have hinted that high fastballs increase spin-rate by a significant enough margin to where a change in location could be responsible for Cole’s dramatic spike. Below is the graph of Cole’s spin rate broken down by location. 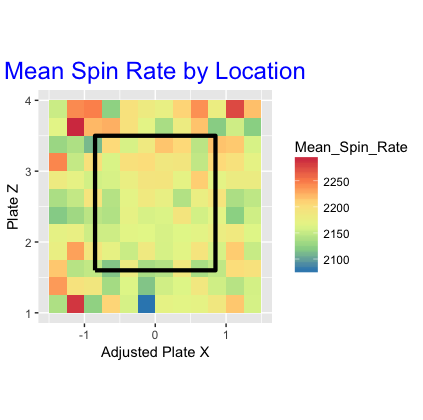 Cole’s spin rate increases by about 100 RPM when he pitches high and inside. That’s a significant jump, but not enough to explain a 300 RPM spike.

In a recent interview with MLB radio, manager A.J. Hinch mentioned that two things could potentially be behind the change in spin rate (without divulging any organizational secrets). First, he said that sinkers have a drastically lower spin rate than four-seam fastballs, and their pitching staff has prioritized the four-seamer.

Below are his pitch-usage charts before and after his transition to the Astros thanks to Brooks baseball:

First thing first, Hinch is right about pitch usage. Sinker rate is way, way down. But, as you can see below, it cannot account for within-pitch spin variation, as his individual sinker and 4-seam spin are both spiking this year.

The second factor that Hinch hinted at was “getting behind the baseball”. We can examine the relationship between release point and spin rate and see if this can really explain such a significant jump. Below is a 3D plot of spin rate by release position. This seems like it could actually explain a good bit of the change. There are two changes associated with the spike in spin rate. First, he’s releasing the ball much further along the Y-axis than before. Second, it looks like he is releasing the ball higher, but closer to his body than the pitches at the very top left of the distribution. Almost every pitch he has thrown in the neighborhood of (-2.2, 54.4, 5.6) has been at around 2300 RPM. Further research should be done on the physical mechanics that generate that spin and if this could really be a causal relationship.

After a quick look at Cole’s mechanics, it does look like there is a conscious change in release point. Below is a screenshot from Cole’s start against the nationals on 9/29/2017. This looks like one of those pitches further along the x-axis than our sweet-spot that we found on the release point chart. See how his elbow is almost parallel to his shoulder. 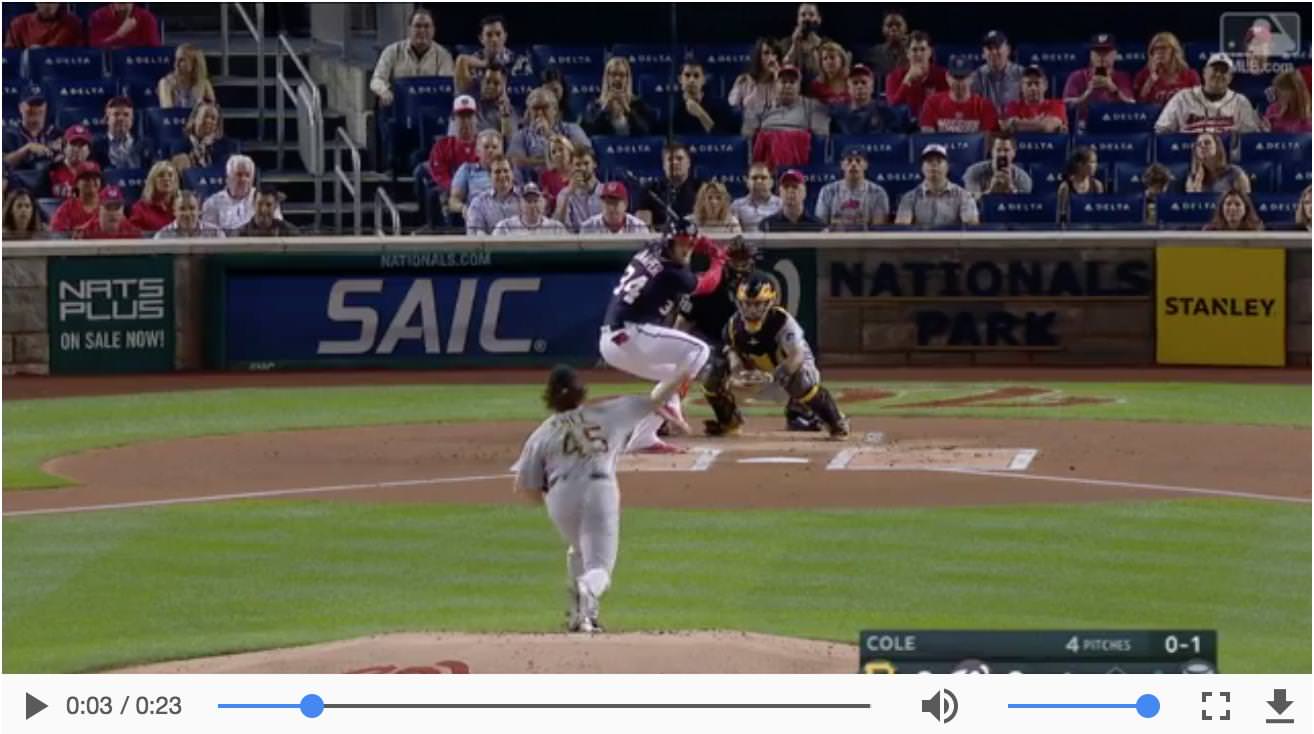 Remember that one-game blip in spin rate that showed up on his changepoint plot? Below is a screenshot of a 97-mph fastball from that start. Notice how his elbow is higher than his shoulder. This could be the change that Hinch was talking about when he said “getting behind the ball” could be behind the increase in spin. When watching the video of the previous pitch, it looks almost as if he’s throwing around the ball instead of throwing through it. 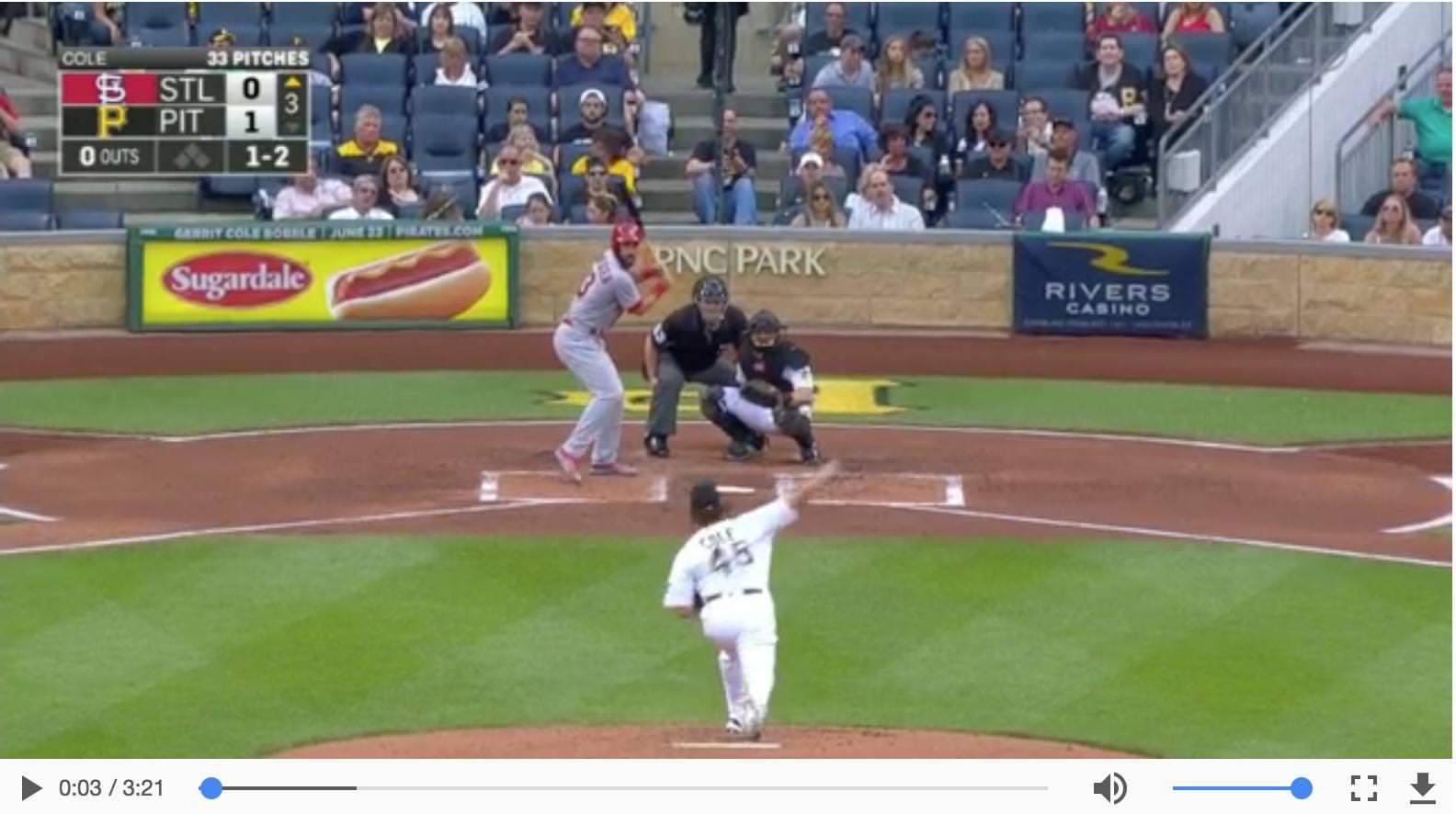 Apologies for the blurry screenshot (it was one of two fastballs with media on baseball savant). Lastly, here’s a screenshot from this year. His release point is much, much more vertical than the previous two. 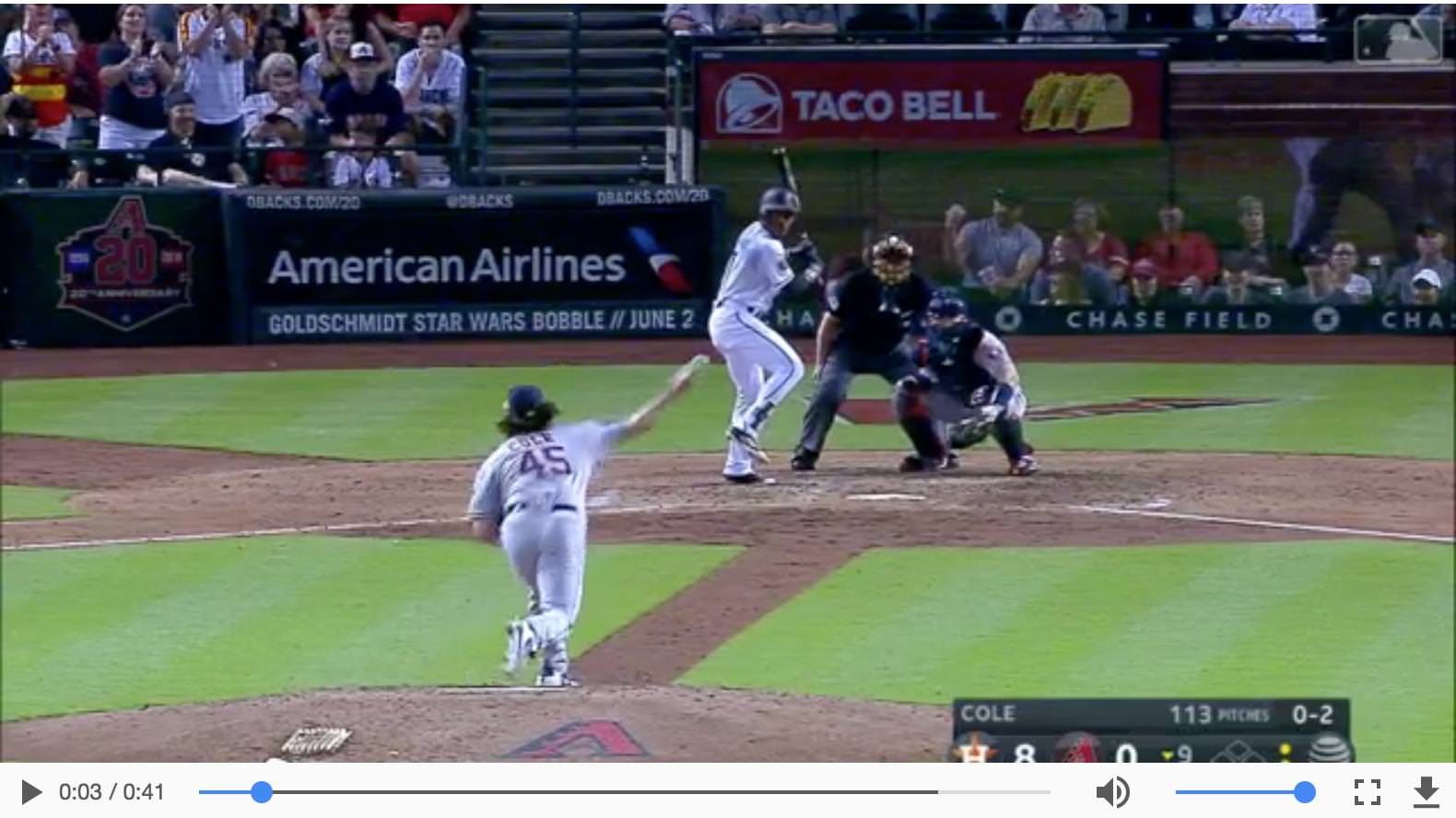 Overall, we should not jump to conclusions on the Gerrit Cole spin question. Just to be perfectly clear, I personally have no idea how mechanical changes actually affect spin rate. I haven’t done the experiments myself and certainly have not spent as much time as Trevor Bauer trying different grips and substances in a controlled setting. However, this article suggests that there is an association, whether it be correlative or causative, in Gerrit Cole’s release point that has come with an increase in spin on both two-seam and four-seam fastballs. If further research can confirm this association, the results could be of incredible use to teams looking for value either in their player development system or trade market.

What Does April Mean?
Let’s Enjoy This Michael Brantley While we Can
6 Comments
Oldest
Newest Most Voted
Inline Feedbacks
View all comments
Jimmember

Very nice job. You related to Sean Forman of Baseball Reference by any chance? He was a math professor, I believe.

Thank you very much! I am not, but my dad was also a math professor. Will check out Sean’s work.

Really good article. Thanks for posting

Wow, this article is fantastic! The chart on Gole’s spin rate showing posterior means and probability of a change is enlightening. And I like that you took it a step further and explored some of the potential mechanical changes that could have led to the change in spin rate.

I’m curious what the data would look like if a foreign substance was being used intermittently and on a particular pitch.