Sometimes numbers tell a story. Sometimes that story is a mystery.

I came across the Baseball-Reference page for Raymond Fagan and was stunned by what I saw. It says Fagan went 13-0 with a 1.16 ERA for the Class D Oklahoma City Senators in 1915. Now the stunning part – it says it was his only professional season. Despite those dominant results, it appears Fagan never pitched again. 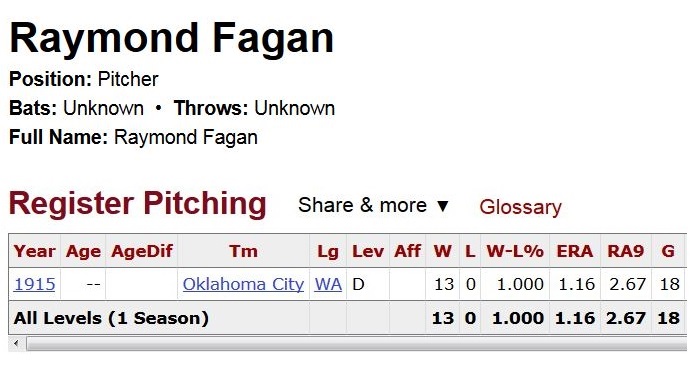 What happened to Raymond Fagan? Did he suffer a career-ending injury? Did he get into legal trouble and change his name? A Google search yielded no answers. This mystery required a deeper dive.

It turned out to be an abyssal dive. Public records searches brought 44,000 documents connected to people named Raymond Fagan, including dozens of Raymond Fagans who were of professional-baseball-playing age in 1915.

My first call was to Peter Pierce, the author of two books about Oklahoma’s early professional baseball history. Pierce knew all about Fagan’s masterful 1915 season but unfortunately didn’t know what happened to him after it.

Next I tried a few strategic calls to phone listings of people with the last name Fagan, but that didn’t work either. One woman hung up on me. 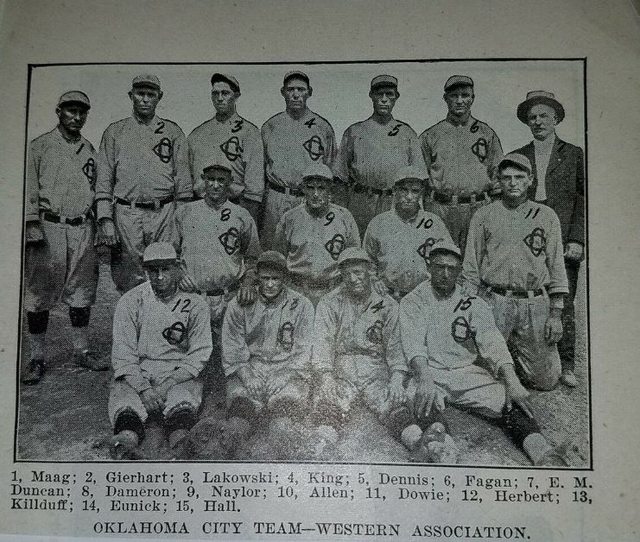 Newspaper archives validated what we already knew – Fagan had an exceptional year. Here are some 1915 sports section headlines about him:

And his opponents were no joke. All eight Western Association rosters had future big leaguers, including Denison Railroaders star Rogers Hornsby, who became one of the best hitters in MLB history.

Fagan’s pitching prowess came decades before Baseball America or prospect rankings, but having one of the top few ERAs in the minors and an undefeated record would get scouts’ attention in any era.

That’s exactly what happened. Newspaper searches show that an Oklahoma City baseball observer contacted the Detroit Tigers suggesting they dispatch one of their four “Ivory Hunters,” an early 1900s phrase for scouts, to lay eyes on Fagan. Detroit’s Ivory Hunter, Arkansas-based Mickey Finn, traveled to see Fagan throw and left impressed. The Tigers bought Fagan’s contract from Oklahoma City for $500 and invited him to their major league spring training in 1916.

“The jump from the Western association [sic] to the majors is a big one, but they all have to start some place and perhaps Fagan has so much natural ability that he does not need to go through the schooling of class A or AA circuits. Walter Johnson came to Washington from a league that was even deeper in the bush than the one that produced Fagan,” the Detroit Free Press wrote. 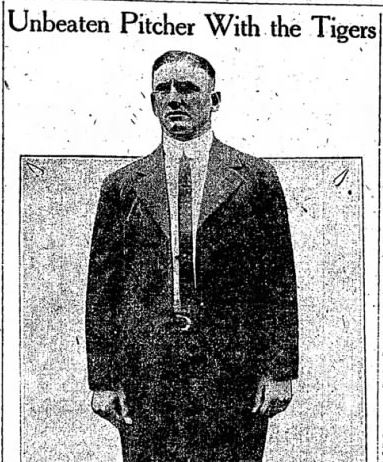 Fagan was competing for a spot on a Tigers team that won 100 games and finished in second place the year before. It was a huge opportunity for Fagan, but he didn’t rise to the occasion. Fagan “pitched part of a practice game for Detroit and Manager Jennings, after looking him over, decided he needed more experience,” The Hutchinson News reported.

Fagan’s pitching wasn’t Detroit’s only concern. “Pitcher Fagan, who is slated for release by Hughey Jennings of the Tigers, can blame the fox trot for his trouble. The would-be Tiger spent too much time on the dance hall to satisfy Hughey,” The Wilkes-Barre Record reported. The Tigers sent Fagan to the Class B Beaumont Oilers after his missteps.

Fagan pitched in at least one regular season game for Beaumont, so why isn’t there a Beaumont stat line under that Oklahoma City stat line?

I learned that one game wasn’t always enough to get a player into the official stats back then. Spalding’s Base Ball Guide and the Reach Official American League Base Ball Guide, two trusted annuals that baseball cranks devoured in the early 20th century, had innings or appearances thresholds that needed to be met before a minor league pitcher earned an entry in the next year’s guide. These statistical cutoffs were fairly common in publications back then. “It’s one of the bugaboos for minor league researchers,” said SABR member Chuck McGill.

Fagan’s name wasn’t listed in the baseball guides printed after the 1916 season and that’s why his brief Beaumont tenure doesn’t appear on Baseball-Reference today.

One day in late-April of 1916, the Oilers were boarding a train to Galveston when Beaumont’s manager announced that Fagan wouldn’t be making the trip because he had been released. This transaction is where Fagan’s baseball bread crumbs stopped.

Where did Fagan go? It was looking like a cold case after he got booted from Beaumont. Newspaper advertisements in succeeding years promoted the “Raymond Fagan Orchestra.” Maybe Fagan traded his cleats for a cello and became a traveling musician! Unfortunately, further research showed the musician wasn’t our guy. The orchestra played theaters in the northeast in 1915 on the same dates Fagan was strumming strikeouts for Oklahoma City.

There was a student journalist named Raymond Fagan at the University of Kansas around this time. Maybe Fagan went from playing games to covering them? This also proved to be a different guy.

The years 1916 and 1917 were burgeoning for the U.S. Navy. President Woodrow Wilson signed the “Big Navy Act” in 1916, adding dozens of ships, cruisers, and submarines to establish what Wilson planned to become “the greatest navy in the world.” This $500 million expansion also included the addition of 19,000 new naval service members.

A call to the Records of the Bureau of Naval Personnel revealed that a Raymond Fagan joined the Navy on June 30, 1917, the same date mentioned by President Wilson in his executive order. Now I just needed confirmation that Navy Raymond Fagan and pitcher Raymond Fagan were the same person. The proof came in an Evening News preview of a 1918 naval baseball exhibition in Pennsylvania: “The Navy lineup includes several players of fame in the baseball world. Pitcher Fagan was formerly a member of the Detroit team in the American League.”

Tracing Fagan’s ship assignments showed that he most likely deployed to European waters during World War I. He was discharged with good health and a fresh arm on May 10, 1919, in Norfolk, Virginia. He stayed in Virginia and revived his baseball career, pitching for the Class C Norfolk Mary Janes, Class B Newport News Shipbuilders, and Class C Richmond Colts from 1919-20.

Additionally, SABR member Jack Morris (not the Hall of Fame pitcher) investigated and proved that Fagan also pitched for the nomadic Austin/Taylor/Brenham Middle Texas League club in 1915. So the separate Baseball-Reference pages for Austin/Taylor/Brenham’s Raymond Fagan, Newport News’ R.L. Fagan, Norfolk’s Fagan, Oklahoma City’s Raymond Fagan, and Richmond’s Fagan all refer to the same pitcher. This of course isn’t a criticism of Baseball-Reference, an indispensable website, but is just an illustration of how imprecise minor league documentation was then compared to now.

U.S. Census surveys show Fagan met his wife Margaret in Virginia and they had one child together, Raymond Jr. After his baseball career, Raymond Sr. held a variety of jobs before passing away in San Antonio from a blood clot in his heart on April 11, 1969, at age 72.

“I didn’t find out that he played baseball until after he died. He didn’t talk about that stuff,” said Debi Albers, Fagan’s granddaughter. “He was a renaissance man. He played ball, he was a private detective, he did security work, he did all sorts of stuff. My mom had a couple of pictures of him in a Detroit uniform. I tell you what, when he was older, he watched baseball on television with a passion.”

Debi taught me one more thing about Raymond Fagan – his friends called him “Ray.”

Tim Hagerty is the broadcaster for the Triple-A El Paso Chihuahuas and has written for Sporting News and The Hardball Times. Follow him on Twitter @MinorsTeamNames.

Member
Member
Lunch Angle
You can flag a comment by clicking its flag icon. Website admin will know that you reported it. Admins may or may not choose to remove the comment or block the author. And please don't worry, your report will be anonymous.

I love this kind of stuff! Great story, Tim

Author
Member
Tim Hagerty
You can flag a comment by clicking its flag icon. Website admin will know that you reported it. Admins may or may not choose to remove the comment or block the author. And please don't worry, your report will be anonymous.

Thank you, Lunch. I appreciate that.

Member
Member
Ryan DC
You can flag a comment by clicking its flag icon. Website admin will know that you reported it. Admins may or may not choose to remove the comment or block the author. And please don't worry, your report will be anonymous.

Very impressive research! How did you find out that Ray Fagan joined the Navy? Was that from his granddaughter?