If you first heard of Domingo German when he threw 6 no-hit innings in his debut start against the Indians, you are not alone. Travis Sawchick posted last month that many hardcore baseball enthusiasts may be like you. Domingo German threw 61⁄3 perfect innings Tuesday, but he wasn’t perfect through 61⁄3 as Dee Gordon led off the game with a hustle double. He struck out 9 and walked none in a dominating performance.

I want to point out a start that I think is more interesting than either of those, and it occurred last Thursday against the Rays. German was excited after the game to have picked up his first career pitcher win. That’s not why I think it’s interesting. Thursday, Rays hitters swung and missed an astounding 26 times in 91 pitches. That’s the best rate in a start all year, in fact it’s the best rate since Yu Darvish baffled the Rays in July of last year.

Josh Hader got 15 swings and misses in 32 pitches in a relief outing against the Twins. Please appreciate Josh Hader before continuing.

Returning to our regularly scheduled programming, Domingo German now has a swinging strike rate of 15.8%, which ranks second in baseball behind only Max Scherzer.

As Jeff Sullivan put it yesterday in his excellent article about German, “when you sort by swinging strikes, you get a list of extremely talented pitchers.” This is that list, and the pitchers on it have elite stuff.

German was never much of a prospect. Kiley gave him a 40 FV in 2015 on the strength of his long healthy track record in the minors, and then he promptly needed Tommy John. He worked his way back to a 40 FV this year. His stuff graded out above average, but now he’s tougher to make contact against than Chris Sale or Noah Syndergaard. I can’t fully explain it. I have some guesses, and interesting things to show you, but I’m still frankly surprised and confused.

I think the best explanations are that German throws hard, has a disconcerting delivery, and is helped by the Yankees’ eagerness to pitch backwards.

Every pitch in German’s arsenal is fast. He throws a fastball at 95, a sinker also at 95, a changeup at 88, and a short, slider-adjacent curveball at 82. Those velocities are 3-4 ticks above average for a starter. Velocity correlates with swings and misses. Pitching is complicated, but that’s simple.

German throws that power curveball 38% of the time, and it has generated a 20% whiff rate. Before the season Kiley and Eric put a 60 present, 65 future grade on it, and this could well be a story about how German has gone all Rich Hill or Lance McCullers, taking a good curveball, throwing it really frequently, and succeeding. But that’s not the story I want to tell, and not just because Travis told it last week. Brooks Baseball provides auto-generated scouting reports, and German’s is fascinating.

All of his pitches generate notably better whiff rates than average! His changeup edges that curveball for the highest whiff rate of all his pitches, at 22.4%, despite getting a pedestrian 45/50 grade going into the season.

German’s four-seamer is straight, with perfectly average movement, and yet “generates an extremely high number of swings & misses.” He seemed destined to join the ranks of Jon Gray, Luis Castillo, Nathan Eovaldi and Sal Romano as pitchers with hard but hittable fastballs, given the flat plane at which it comes in. He throws a fastball (of either the two- or four-seam variety) 43.7% of the time, a very low mark relative to the league that certainly helps his whiff rate, but actually a higher mark than average for the fastball-hating Yankees.

Something is helping these outwardly unremarkable pitches get whiffs at remarkable rates. I think that it’s what Eric Longenhagen last week called his “wonky arm action.” He falls off to the first base side, and whips his arm around late—it’s like if Mychal Givens threw from a 3⁄4 arm slot. We’re long overdue for some GIFs; look at this deceptive delivery.

That horizontal arm action helps him generate well above average run on his sinker and changeup; they both move about ten inches.

German is certainly not blessed with plus command, but he hits his spot consistently with his sinker—down and in to righties, down and away to lefties. 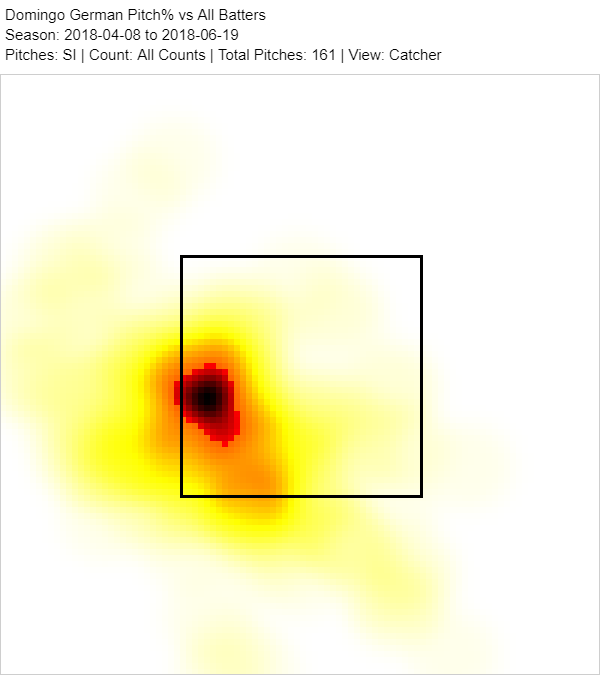 All of German’s pitches have above average whiff rates for their pitch type. But his usage is a big driver of his whiff rates. Mathematically, if he mostly threw his sinker, which gets 8.7% whiffs, he would not have a 15.8% swinging strike rate. German has bought into the Yankee fastball approach. He’s throws his high whiff curveball and changeup 38% and 19% of the time respectively.

It’s not just what he throws, but when he throws it. German go-to pitch at 3-1? The changeup. He throws as many four-seamers at 0-2 as 2-0. This visualization from Baseball Savant shows how unpredictable his pitch mix is. 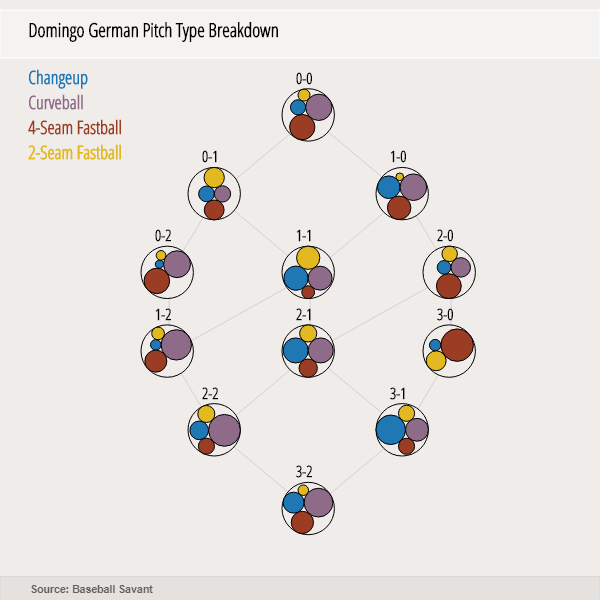 The 0-2 fastballs up and out of the zone are a lot harder to hit than the 3-1 fastballs poured over for strikes. This helps answer the question of why his straight fastball gets so many swings and misses.

Jeff found that German has the seventh highest non-fastball strike rate in the majors. While part of that is that he has been challenged to throw off-speed pitches when behind in the count, it also shows that he has the control to do so.

To end things, here are three German curveballs, swung on and missed while behind in the count. The curveball is his best pitch and I haven’t shown you any GIFs of it. He can throw a sharp curveball in any count, and whether or not he keeps pitching like he has 70-grade stuff, German looks to have a place in a big league rotation for years to come.