Orioles fans like myself don’t have a lot of hope. It’s hard to get excited about a starting lineup featuring Austin Wynns, Joey Rickard, and Rio Ruiz. The Orioles’ hope is for the future, and one thing that got some Orioles fans excited this winter was the selection of Richie Martin with the first pick of the Rule 5 draft. Fans can dream about their team unearthing a diamond in the Rule 5 draft, reminding each other that Jose Bautista was a Rule 5 draft pick once. But the likelihood of success remains extremely low. Still, the first shot at a Rule 5 draft pick seems to suggest a better chance at success. The question is, how much does Rule 5 draft position predict the player’s future career value or team contribution?

To answer this, I identified data from the 2003 to 2014 Rule 5 drafts. I included only players selected in the major league portion of the draft, a sample size of 175. I also only included data up until 2014 to give players time to contribute towards their career bWAR and team bWAR values.

First off, the bar for success in the Rule 5 major league draft is fairly low. Take a look at the distribution of total bWAR provided to the team during the selected players’ tenure. 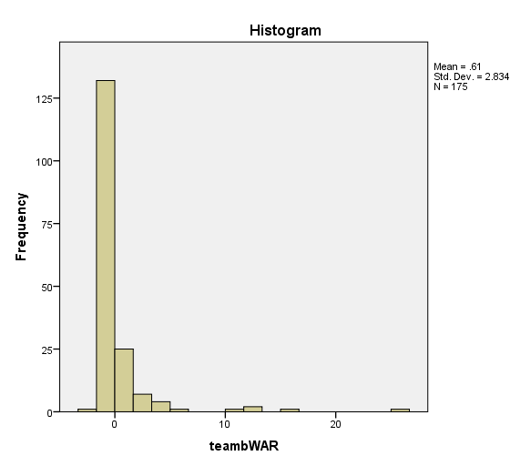 That’s a lot of clustering around 0 with the exception of some highlights like Shane Victorino, Dan Uggla, Joakim Soria, Marwin Gonzalez, and Odubel Herrera, who all come in at top-10 in team bWAR. The mean team bWAR provided is .61 for this sample. Only six players, or 3.4%, provide more than 5 bWAR to their selecting team. In comparison, 25% of them posted a negative team bWAR, including poor Levale Speigner, who posted a -1.7 bWAR in 26 games across two seasons with the Washington Nationals.

The scatterplot for career bWAR looks quite similar with a bit more variation. Sixteen of these players reached 5 career bWAR, or 9.14%. Not great, but you can see some talented players here like R.A. Dickey, Josh Hamilton, and Darren O’Day. 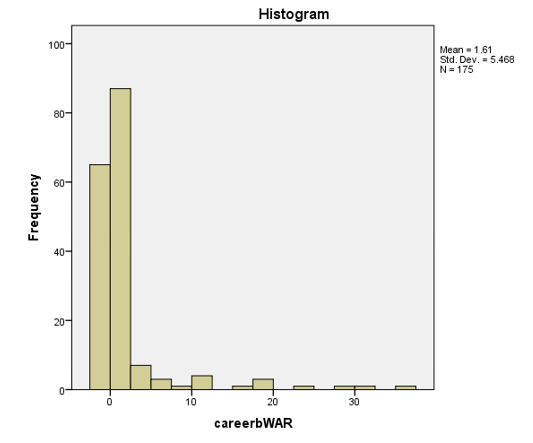 There is some variation around team bWAR and career bWAR, so does Rule 5 draft position play a part?

Analysis using linear regression and team bWAR doesn’t find anything statistically significant. The reported p value falls outside the 95% confidence interval, though it is close at .074. The beta of -.135 notes that if the relationship was statistically significant, team bWAR would decrease as draft position rises. However, the relationship explains only 1.8% of the variation in team bWAR (R=.135, R2=.018).

With this in mind, teams and their fans shouldn’t get too excited about a top pick in the Rule 5 draft. It’s a crapshoot where you just might find the next Obdubel Herrera, but it’s also crapshoot where you might just find the next Levale Speigner. Talent exists in the Rule 5 draft, but it doesn’t appear that a high draft pick increases the likelihood of finding a hidden gem. However, this doesn’t mean teams shouldn’t try. The low price of the lottery ticket makes it a favorite activity of lower-tier teams. Future research should expand this sample to look specifically at team bWAR, as the predictive relationship appears close to statistical significance.