When I am thinking about buying a ticket to a baseball game, often my first question is “Who’s pitching?” I have always felt that the most enjoyable type of game is one in which a great starter is on the mound. Is this feeling common among fans or do they buy tickets regardless of the starting pitcher?

Information about each game was collected from Retrosheet’s game logs. In accordance with Retrosheet’s terms of use, please note the following statement: “The information used here was obtained free of charge from and is copyrighted by Retrosheet. Interested parties may contact Retrosheet at retrosheet.org.” Pitcher performance data was gathered from FanGraphs. In addition, the people.csv data set found here was used to match player ids from Retrosheet to FanGraphs.

A random forest model to predict attendance was built for each season from 1938-2018. The cutoff point of 1938 was chosen because of sample size restraints.

The independent variables for the model are:

The differential was calculated between the actual attendance and the predicted attendance using the formula:

Next, the average differential for each starting pitcher was determined, and we considered only pitchers who made at least 10 starts in the given season. To compare differentials to pitcher performance, fWAR was used as an approximation. It seemed to be the best choice as it captures both the quantity and quality of a pitcher’s performance. The pitchers were separated into four groups:

The differentials by group are considered.

The following graphs show the average differential by group over time. 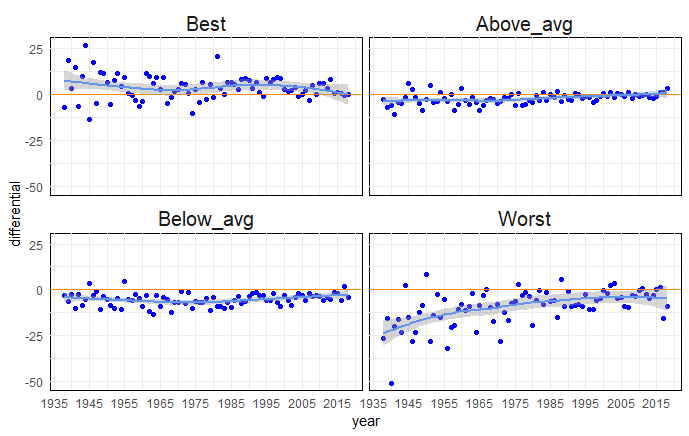 Although the magnitude ebbs and flows, the sign of the differentials remains consistent within groups. The R-sqaured value shown is the average R-squared value of the models in the decade, and they increase over time as the average number of pitchers who made at least 10 starts increases. Overall, the models do a pretty good job fitting the data, especially with the larger sample sizes in recent years. Also note that the models tend to overestimate attendance more than underestimate, as all of the groups other than Best (which accounts for just the 90th percentile and above) averages a negative differential. This makes it even more convincing that the pitchers in the Best group are bringing in more fans.

In more concrete terms, the average differential of 2.80 for 2010-2018 means that if a pitcher in the Best group is starting, and the model predicts 30,000 people will come to the game, then about 840 additional fans should be expected.

It appears that the quality of starting pitchers do in fact impact ticket sales, and in particular star pitchers starting a game tend to put more fans in seats. This relationship is consistent over time, with no clear linear trend that would suggest starters are having more or less of an impact now than in past years.

Investigating the Struggles of Chris Devenski
The Passed Balls Are Gone, but Is Gary Sanchez a Better Defender?
newest oldest most voted

Member
Mac
You can flag a comment by clicking its flag icon. Website admin will know that you reported it. Admins may or may not choose to remove the comment or block the author. And please don't worry, your report will be anonymous.

Seems like the most interesting finding is that above average starters only draw average attendance, meaning they under-draw compared to their talent level. Which makes sense with what we know – fans love the top stars way, way more than the good but not great guys.

Member
David Ducksworth
You can flag a comment by clicking its flag icon. Website admin will know that you reported it. Admins may or may not choose to remove the comment or block the author. And please don't worry, your report will be anonymous.

Obviously this is Fangraphs, and fWAR is the home metric, but I wonder if bWAR would not have been a better option for this kind of analysis. We are trying to see how attendance is changed by the pitchers the fans think are best, which makes a metric based on runs allowed likely better track with the opinion of the majority of fans who, for most of the years in the model, and likely even today do not know what FIP is (for earlier years, because it did not even exist yet.)

Member
AHume92
You can flag a comment by clicking its flag icon. Website admin will know that you reported it. Admins may or may not choose to remove the comment or block the author. And please don't worry, your report will be anonymous.

Member
Member
Lucas Kelly
You can flag a comment by clicking its flag icon. Website admin will know that you reported it. Admins may or may not choose to remove the comment or block the author. And please don't worry, your report will be anonymous.

This is great work. Why did you choose the random forest classifier in particular? I would love to see your process, do you have a GitHub link you would be willing to share? Very interesting read. Thanks!