Salvador Perez Has a Complicated Relationship With the Strike Zone

Between catching pitches for one of the worst pitching clubs in Baseball (The Royals have the worst team ERA in baseball), and being made a fool by Adeiny Hechavarria at the plate (5/14/18), Salvador Perez is having an embarrassing year. Yet below the obvious misfortune, a slow insidious killer lies. Salvador Perez seems to have forgotten about the strike zone.

In 2016 Salvador Perez won a Silver Slugger award. How can a relatively recent award winning catcher have forgotten about the strike zone? Well, the thing is, the strike zone and Ol’ Salvador have been in a tenuous relationship for a long time now. From 2016 to 2018, nobody in the MLB has swung at more outside pitches than Perez. Over the past 4 years, Perez has swung at 42.5%, 44.2%, 47.9% and 49.1% of pitches outside the strike zone (O-Swing%), respectively. All these percentages place him near the top of the leaderboards for each of these years. His contact rate on outside pitches during that time (O-Contact%) is 73.6%, 65.8%, 70.4%, and 63.1%, respectively. The nature of Perez’s efficacy on swinging for outside pitches is worth a deeper dive.

Does Perez benefit from his lack of plate discipline? In order to simplify the the study, I am going to only be looking at Salvador Perez in 2018 so far. Whether the lack of discipline worked for him in the distant past is not the focus, instead I am going to look at the efficacy of this kind of batting for Perez moving forward, using 2018 data to support my prediction. Perez’s season started April 24th due to a MCL tear. As of the end of play on 5/18, Perez has seen 333 pitches this year. Perez has swung at 56.4% of those pitches, meaning that he has swung at roughly 187 of all of the pitches he has seen this season. Of this 187 pitches swung at, Salvador Perez has swung at approximately 46 pitches outside the strike zone this season. One look at Perez’s Swing% heat map shows that he seems to believe that the strike zone is larger than it actually is. 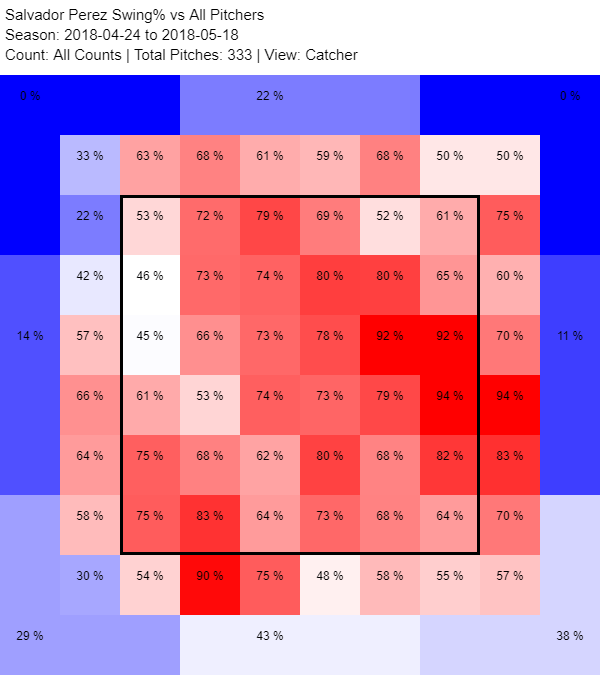 Perez swings at a markedly higher percentage of pitches outside the strike zone than his contemporaries. Jorge Alfaro, and Wilson Ramos are the only two Catchers so far in 2018 that have swung at outside pitches at anything near the rate of Perez’s O-Swing of 49.1%, with the other catchers at a rate of 44.1% and 43.2% respectively, (Min PA 100). Perez has been a far better contributor to his team this season when he has shown more plate discipline. He has had a far inferior wOBA on days in which he has an O-Swing above 50%. His average wOBA on 50% O-Swing days is an abysmal .237, which is .067 less than league average for catchers and is .078 less than the overall league average. In comparison, on days in which Perez has an O-Swing% below 50, his wOBA is .440, a vast improvement, and a wOBA that puts him .04 above Mike Trout. If an outlier game against Detroit on May 5th in the below 50% dataset in where he had a wOBA of .000 is removed, his below 50% O-Swing wOBA would become .484, a number that would put him not far off the wOBA of Mookie Betts (.495). All this is to say that Perez is a very valuable hitter on the days in which he shows better, more league average (29.9% O-Swing) plate discipline.

What of the pitches that Perez swings on outside the strike zone, and actually makes contact? Perez boasts a 63.1 O-Contact%, which is the best contact percentage of Catchers (100 PA minimum) with above an 40% O-Swing. Are these contacts worth anything, or are they just mostly foul balls and popups? Perez has made contact with 22 pitches outside the strike zone. (There is a discrepancy of approximately 6 pitches here between the data supplied to FanGraphs, and the data supplied to BaseballSavant. I have decided that this slight difference does not compromise the integrity of the article, as my conclusions are the same. As such, some of the pitch numbers may be slightly off due to the slight difference between the O-Swing and O-contact% of FanGraphs and the statistical equivalent Chase and Chase Contact% of BaseballSavant, however the use of BaseballSavant was necessary for the exact pitch breakdowns.) Of these 22 pitches Perez has fouled off 13 of them, and has hit the other 8 chased pitches. Of these 8, he hit into an out in 7 of them, with the remaining contact being a single. So while Perez’s contact numbers while chasing are impressive, they amount to naught. Even with this high contact percentage the previous conclusion still stands, Perez is a bad hitter when he is in a chasing mood, and a very good one when he works the strike zone.

Is there something special about the 46 pitches that Perez chased outside the strike zone? (The data of both sites confirm that Perez has swung at 46 pitches outside the strike zone, so there is no problem here.) Is the number mostly made up of pitches that are right on the edge of the zone? The answer to both these questions is no. Perez has been lit up for a total of 19 swinging strikes to just the outside bottom-right of the Strike Zone alone. Meaning that of the 46 chased pitches so far this season, a staggering 41% of them have been swinging strikes to the outside bottom-right. The final tally of Perez’s adventures outside the strike zone sit at a pitiful, but not wholly unexpected, 24 Swinging Strikes, 14 Fouls, 7 hit into outs, and 1, lone, sad, pathetic, inconsequential, single. 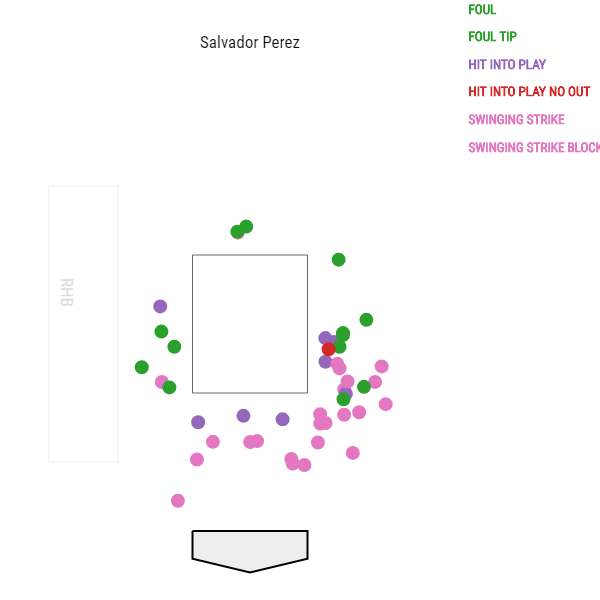 In conclusion, Salvador Perez desperately needs to work on his plate discipline if he wants to continue to be a Major League catcher worth anything close to the $7.5M and $10M the Royals are paying him this year and the next. If Perez cannot reverse the negative course that his batting discipline has been on the last couple of years, his O-Swing% having jumped 4.9% in the past two years alone, he will begin to become an non-factor at the plate. Perez’s WAR has been in a steady decline ever since his O-Swing% began the leap to its current heights. If Salvador Perez cannot find more discipline at the plate, the former Silver Slugger will no longer be worth having on a Major League Team. 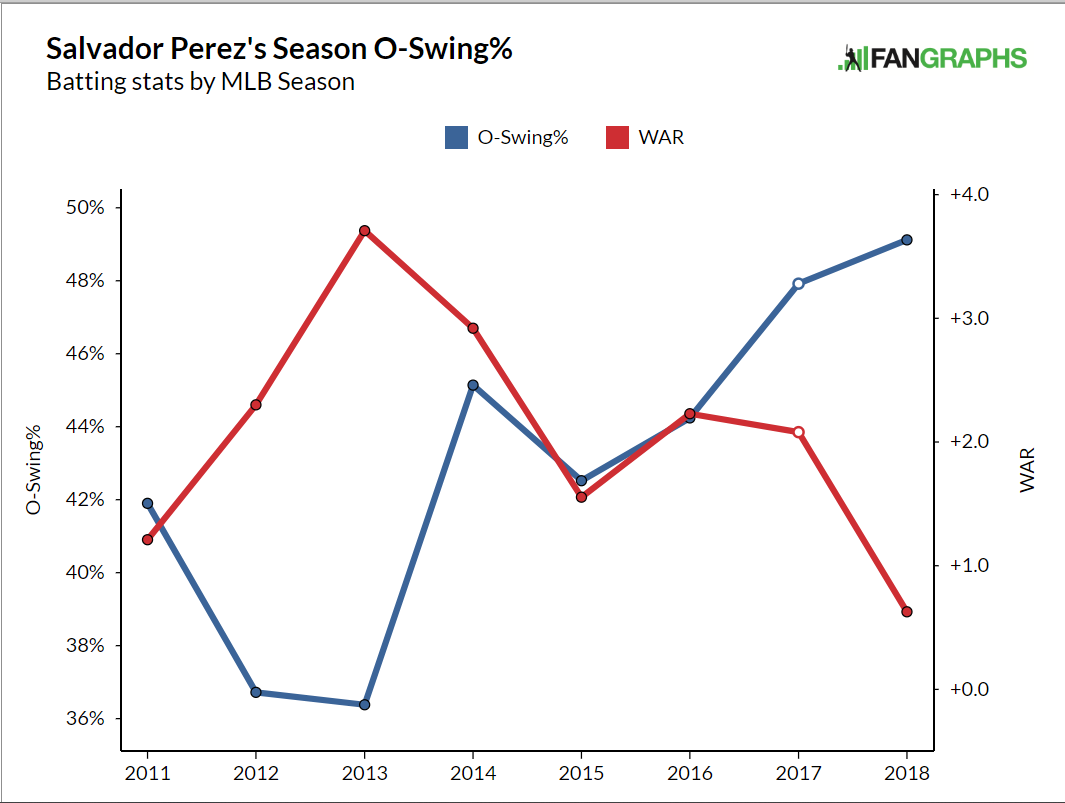 (Data courtesy of Fangraphs and Baseballsavant)

There is beauty in the penultimate. While hit number 3000 will be the moment that is played at Albert Pujols’ inevitable Hall of Fame ceremony, that milestone could only be reached due to the 2,999 victorious battles waged before it. This is the story of Miguel Castro vs. Albert Pujols. The following article focuses on the complicated beauty of everything that surrounded the penultimate hit of a cherished milestone. The following piece is also showcase of how being in touch with batting analytics can and should help managers make the correct bullpen calls.

Miguel Castro is a young, below average reliever. Since his trade from the Rockies to the Orioles in 2017, Castro has posted an ERA of 3.25 and a WAR of -0.1. These numbers are far superior to the ones posted during his stint with the Rockies, but they are not anything particularly special. During his development, Castro has all but ditched the fastball, as he initially (2015) threw it 63% of the time. By 2017, when he would first duel with the aging Pujols, batters saw a fastball from Castro a mere 1.7% of the time, with even less of a fastball dish rate so far in 2018. Castro now makes his career on Changeups, Sliders and especially Sinkers. Castro threw batters a Sinker 58.8% of the time in 2017, this puts his Sinker rate at 6th among 2017 relievers. These numbers have stayed relatively the same so far in 2018, although Castro has thrown slightly less Sinkers in favor of more Changeups. As baseball writers have lamented the death of the Sinker, Castro has been one of the few pitchers that still rely heavily on the dying pitch.

The Albert Pujols of St. Louis needs no introduction, he is one of the most prolific hitters of all time, and a future Hall of Famer. The Albert Pujols of Anaheim is a different player altogether. Much has been written recently on FanGraphs about the decline of Pujols, so I will spare those details here. Instead, I want to focus on how Castro allowed hit number 2,999 to occur against a batter that had been unable to get on base in all their previous meetings.

In 5 meetings at the plate that span from August 18th 2017 to May 3rd 2018, Pujols has hit on Miguel Castro one time. On May 3rd, Pujols hit a 96 mph sinker (Castro’s average sinker speed this year) and in doing so acquired his 2,999th hit. In all of their three previous meetings Pujols hit into an out, and on their subsequent meeting Albert was hit by an inside Changeup. So what was different about their 4th meeting? For the first and only time, Castro threw a sinker close to the center of the strike zone. In their previous 3 meetings, Castro threw Sinkers on the inside and outside of the plate, as well as mixing in Sliders that got looking strikes on multiple occasions. On Thursday night however, after a Slider that got called a ball and, just like in previous encounters, a Slider that got Albert looking, Castro threw a Sinker down the middle-right, and paid the price.

From 2016 to 2017, Pujols’ Batting Average slid across the board against every single pitch but two. One of those pitches just happens to be Miguel Castro’s specialty, the Sinker. (The other is the Curveball.)  In fact, of all the pitches that Albert sees on any given day, he has the best chance to get on base while facing a Sinker by a wide margin. In 2017, Pujols batted .338 against the Sinker, compared to .250 against the Changeup, his next highest batting average against a given pitch. Average is not the only thing Albert was better at while facing a Sinker. His stats across the board are at their highest in 2017 and now 2018 when facing the Sinker. Pujols has a higher SLG% and more HRs when facing a Sinker. He had the most doubles in 2017 against the Sinker compared to any other pitch. One of the three Triples in his entire career came against a Sinker. In short, Albert undoubtedly likes to see a pitcher that throws Sinkers.

Analyzing Pujols’ batting average in the strike zone with and without the data for Sinkers since June 1st 2016 shows just how effective Albert has been against the afformentiond pitch. Almost every area of the strike zone saw an increase in average when attempts at Sinkers were factored in. Of special note is the mid to upper right quadrant, where averages increased in every sector. This is the area in which Castro threw the Sinker that would create Pujols’ 2,999th hit.

To futher analyze Pujols’ batting preference for Sinkers, I also compared the heatmaps of Albert’s average against Fastballs compared to Sinkers.

Unsuprisngly, we again see a great disparity between Pujols’ performance when facing Sinkers and when facing other types of pitches.

The conclusion here is that on Thursday night Buck Showalter replaced Chris Tillman with the worst possible choice. With runners on and Pujols’ soon coming up to bat, Showalter subbed in Castro, a pitcher whose main pitch was the favorite of the upcoming batter, who then summarily hit the Sinker into play and scored runs on a breezy double. An event that would put the former St. Louis slugger one hit way from history. If Baseball Clubs would have teams of analytics people, those who could have warned Showalter before he sent out Castro, teams could make more informed decisions about who to put out in relief in high risk situations as seen on Thursday night.

Thank you for reading! This is my first piece in the whole baseball analytics realm, and chances are this thing has logical fallacies or something of the like. Any helpful comments/critcism/pointers are much appreciated.