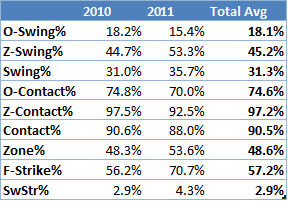 On the surface, Brett Gardner looks like a Bobby Abreu protege (without any power). Since 2010, Brett has shown off his great eye for pitches, posting the 2nd lowest chase rate in baseball at 18.1%.

His ability to make contact with pitches is also astonishing, as he makes contact with 97.2% with pitches in the strike zone, behind only Juan Pierre and Marco Scutaro. Of the 2789 pitches Brett has seen since the start of 2010, he has only swung and missed at 265 pitches.

Where Brett Gardner lacks is in his ability to swing at pitches in the strike zone. Over the last two seasons, Brett has swung at a major league low 45.2% of pitches in the strike zone. He owns this record almost 6% (next lowest is Elvis Andrus at 50.9%) and is almost 20% below the league average. Combined with his low chase rates, its only natural also that Brett has the lowest swing rate in MLB at 31.3%, compared to the league average of 45.6%.

END_OF_DOCUMENT_TOKEN_TO_BE_REPLACED

Another Season Gone By Without Realignment

For the first time ever in the divisional era, 1 division has managed to run the table against the other two. Barring the Royals taking 3 of 4 from Tampa over the weekend, there won’t be a single team in the American League who will have put together a winning record against the AL East.

Since 2007, only 8 teams in the American league have been able to put together a winning record against the AL East, (LAA 3 times, OAK twice, TEX, DET and SEA once). This season, as things currently stand, the Central and West divisions have combined to go 149 – 198 (.429%) winning percentage against the AL East, a record comparable to the Cleveland Indians or the Washington Nationals.

What’s worse, is that the AL East will end again with the team that has either the worst, or second worst record in the American League (assuming Buck Showalter doesn’t phone it in this weekend), but looking deeper into their divisional performance, how bad exactly is the AL East’s punching bag?

And the 4th place Jays?

This means, on average, even the worst that the AL East has to offer, averages almost 5% points higher against non-divisional foes, or roughly 7 wins better across a 162 game season. How much are those 7 wins worth? If you’re Tampa, obviously zero since the only way to fill the ballpark there is to give away 20,000 tickets, but to a team like Seattle or Toronto (as highlighted above), the 2009 Jays managed 75 wins at 23,162 fans a game, whereas the 2008 version of 86 wins averaged 29,626. Obviously its a very rudimentary look at attendance and I’m ignoring plenty of factors, but the fact is and has always been that outside of Tampa Bay, people will inevitably jump on the bandwagons and go to see winning teams win ballgames. The point I’d like to be making here is the financial impact of regional divisional slotting, and if you take the leap with me, obviously the analysis will have a more profound impact.

The 2008 figures are both skewed in the positive directions due to AL Central success during interleague play, getting to play the even weaker NL West in the majority of their IL games, and zero games against that division’s winner (84-78 Dodgers), so discounting those games, the result is:

Does the AL East really cost a team 7-10 Wins a season like it has the Orioles? Probably not, there are plenty of other factors that go into a teams eventual W-L, but traditional Strength of Schedule metrics that value the winning % of your opponents, or Runs Scored/Runs Allowed Differentials often don’t capture the simple facts that your record and team stats will be positively influenced by facing the Royals 18 times a season. Who knows, maybe the 2010 Blue Jays, who lead the majors in slugging and home runs, could’ve competed this season in another division where its young pitching staff wasn’t exposed to the three highest scoring teams in the league (NY Boston Tampa) for 54 games? Under this current alignment, we can never be too sure.

On the positive, at least the divisions regionally make sense in their current form, unlike football. I’m sorry, putting Miami in the AFC EAST, Baltimore in the AFC NORTH, and Indianapolis is in the AFC SOUTH makes about as much sense as the BCS national championship formula.