Ever since the MLB draft was created in 1965, teams have been searching for any competitive edge to separate themselves from the rest of the league. After all, it is one of the best ways to acquire young affordable talent for your organization. Not picking the best players available is a huge missed opportunity for any club and can set the organization back for years. It can also exasperate even the most devoted fans. It is imperative to have successful drafts every year, but what constitutes a successful draft? How many major leaguers are available in a draft and where can you find these players? These are some of the questions I hope to answer.

Much of my analysis in this article will include references to team-controlled WAR. I calculated each draftee’s WAR total by summing their pitching and hitting WAR totals for the first seven years of their career to estimate the amount of value they provided their clubs before the players were eligible for free agency. This method is not perfect, because it does not consider demotions to the minor leagues, and it incorrectly assumes that every team would keep their prospects down in the minors to gain an extra year of control. However, I believe that the first seven years of WAR in a player’s career is a valid estimation of the value a player provides his organization before he exhausts his team-controlled seasons.

The drafts being examined are the drafts that took place from 1965 to 2004. I chose to stop at 2004 because that was the last year that had every player in its draft class exhaust his team-controlled seasons. If I were to include more recent drafts that still have active players, I could draw erroneous conclusions, since these players still have time to make their major league debuts and accumulate more WAR in their team-controlled seasons.

The graph below shows how many eventual major leaguers were drafted each year. This dataset includes all players that were drafted whether they signed with their team or not. This means it does include duplicate values for players that were selected more than once. I decided to keep these duplicates because I wanted this graph to show the total amount of major leaguers available in each draft class, and if a player didn’t sign with his team, the player would still be eligible for the next year’s draft. 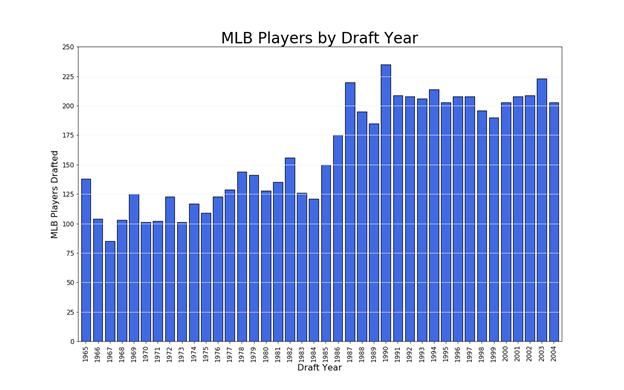 The main thing that jumps out is the increase in major league players starting in 1987. MLB used to have a January draft and two secondary drafts that took place in June and January, and 1987 was the first year where the league consolidated all the drafts into one, which likely explains the dramatic increase in major leaguers selected. I also believe that the number went up due to expansion, as the league increased from 26 teams in 1987 to 30 teams in 1998, meaning more opportunities for drafted players to occupy those newly created roster spots.

The next thing I chose to investigate was the amount of WAR available every year. It is nice to know how many major leaguers are drafted each year, but it is more important to find how much value is available each draft. What would you rather have your team do, draft one All-star talent or three up-and-down relievers? The previous chart ignored the value created by these players, while the chart below shows how much total WAR was available in each draft class. I once again included players that were drafted more than once. 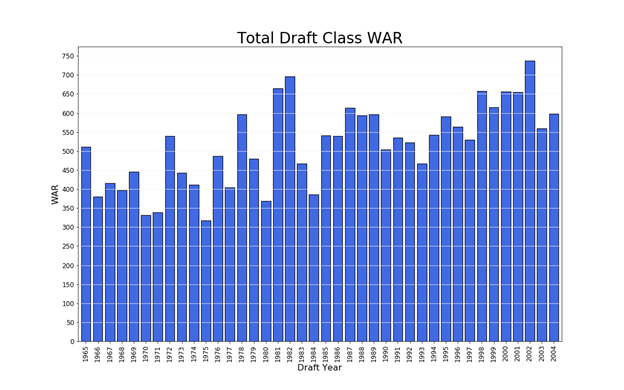 The 2002 draft had plenty of high-profile first-round picks like Cole Hamels, Zack Greinke, and Prince Fielder, but even more impressive was the overall depth of major league All-stars available that year. Brian McCann, Joey Votto, and Jon Lester were all selected in the second round, and they each contributed over 20 WAR in their team-controlled seasons. Russell Martin was drafted in the 17th round and Jacoby Ellsbury and Matt Garza were both selected out of high school but chose not to sign with their teams.

The 1982 draft featured Barry Bonds, Dwight Gooden, Bret Saberhagen, Will Clark, Barry Larkin, and Jose Canseco, and each of them produced over 25 WAR in their team-controlled seasons, with Bonds leading the way with 48.4 WAR.

The 1981 draft had eight players produce over 25 WAR, headlined by Roger Clemens with 43.7 WAR out of San Jacinto College. He was selected by the New York Mets in the 12th round, but he did not sign and went to the Red Sox in the first round two years later. Can you imagine the 1986 Mets rotation if they had signed both Clemens and Gooden?

The 1975 draft was not devoid of talent, with Andre Dawson, Lou Whitaker, and Lee Smith all being drafted, but Dawson was the only player that produced over 25 WAR, with Whitaker and Jason Thompson coming in second and third with 22.4 and 22.3 WAR, respectively. There were a few other major league contributors in this draft class, but the depth just was not there.

The information above only shows the total amount of WAR, but the distribution of WAR matters as well. For example, consider two draft classes with a total of 300 WAR each but one is produced by 10 players and another is produced by 30. A team that selects later in the draft would probably prefer to pick in the class that has 30 players, since their odds of selecting some type of major league contributor are higher than the year with only 10.

The table below will be grouping drafted players by 5-WAR increments to show the number of players available in each grouping by draft year. I also replicated the table showing the percentage breakdown for each year as well to account for the different sizes in draft classes. 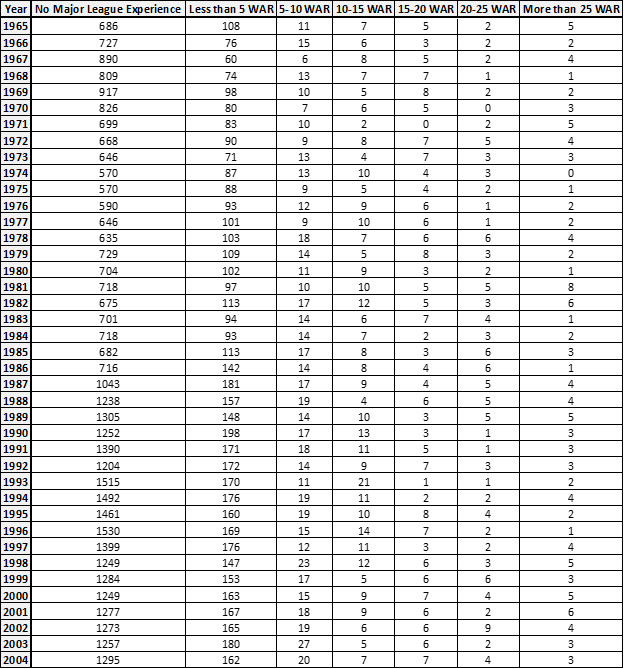 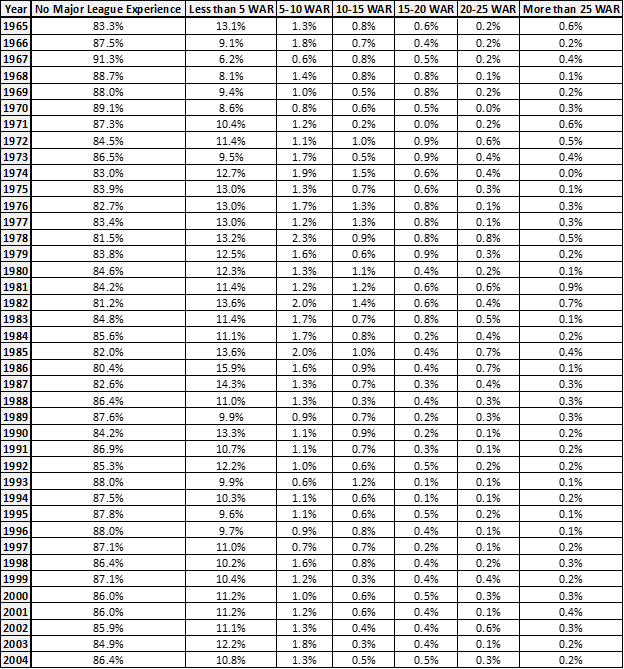 The next thing that stands out is the minimal number of star-level players that are available in each draft. On average there are only 3.15 players available each year that produce 25 or more WAR in the majors. The year with the most of these players was 1981 with eight, and 1974 was the only draft that did not have any players produce 25 or more WAR.

The main takeaway from these tables is that it is extremely difficult to make it to the major leagues and even more difficult to produce at a high level. It is no surprise that it is so hard for teams to build a championship-caliber roster through the draft alone. That brings me to the next part of my analysis.

Best Draft Classes of All Time

The draft is paramount to any organization’s long-term success. Being able to consistently choose future major leaguers to replenish an organization’s depth ensures that a club can compete for championships year in and year out. A successful draft can also launch a losing team into contention, but what constitutes a successful draft? The chart below answers this question by showing the teams that drafted the most WAR in a single season. The dataset used for the chart excludes any players who did not sign with their drafting team. If I included players who refused to sign with their team, I would be rewarding teams that drafted players when they had no intention of meeting the player’s asking price to forgo his amateur career. 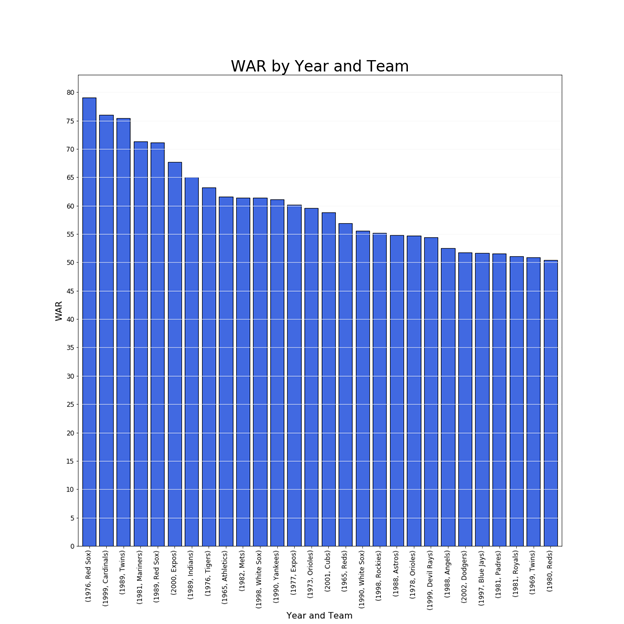 The 1976 Red Sox draft class had a total of seven major leaguers, with three producing over 10 WAR each. Bruce Hurst produced 12.5 WAR and Mike Smithson produced 12.3, but the heavy lifting was done by seventh-round draft pick Wade Boggs. Boggs produced a whopping 51.7 WAR in his first seven seasons, which is the second-most by a player drafted from 1965 to 2004.

The 1999 Cardinals draft class had a total of eight major Leaguers, with Albert Pujols and Coco Crisp leading the charge. Crisp produced a solid 16.9 WAR, but Pujols accumulated an astounding 53.5 WAR in his first seven seasons. The Cardinals had three first-round picks in this draft and almost all the value came from a seventh-rounder and a 13th-rounder. This goes to show how complicated it is to scout and develop major league talent.

The 1989 Twins drafted several important contributors to their 1991 championship team in Chuck Knoblauch (33.6 WAR) and Scott Erickson (18.4 WAR). They also drafted future Rookie of the Year Marty Cordova in the 10th round, and he amassed a total of 5.7 WAR. The Twins drafted four other eventual major leaguers, led by University of Minnesota left-handed pitcher Denny Neagle with 14.8 WAR.

With the margin for a successful draft being so thin, it would be beneficial for an organization to know which type of player has the best chance of cracking the MLB roster. The chart below is broken down by the school type the player was drafted from (four-year college, high school, or junior college) and their primary position at the time of the draft. 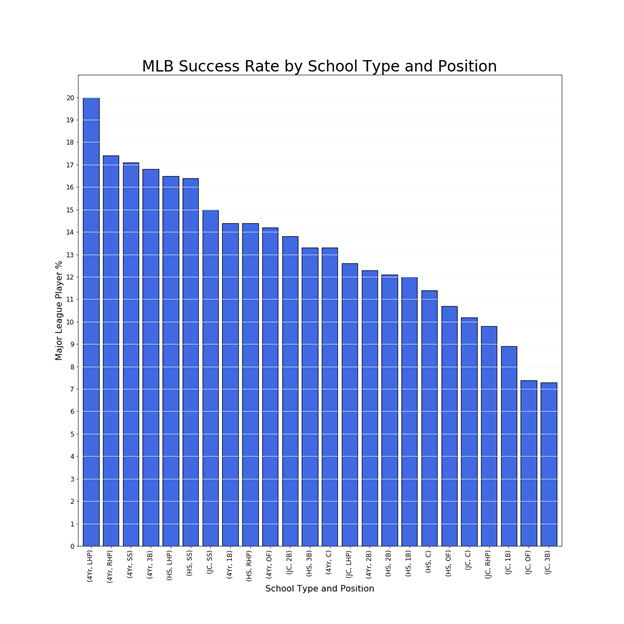 College pitchers seem to have the highest success rate, with 20% of left-handed pitchers and over 17% of right-handed pitchers making the majors. This is likely due to the high churn rate of MLB pitchers as well as the perceived major-league readiness of college pitchers. Shortstops also have a relatively high success rate across all school types, with every shortstop at or above a 15% chance of making a major league roster. I believe there are two main reasons for this. The first is that most amateur teams play their best player at shortstop due to the difficulty of the position and the propensity of plays the position is involved in. The second is that shortstops are athletic enough to play many different positions, and this versatility allows these players to have more opportunities to eventually crack an MLB roster.

Where to Find Major League Talent?

Organizations are always on the lookout for MLB talent, but where do most of them come from? If a team can identify the country’s hot spots of talent, they can allocate their personnel and travel resources more effectively and efficiently to try to gain an advantage over other teams. The heatmap below shows where all major league players that were drafted came from in the contiguous states using their school’s coordinates. 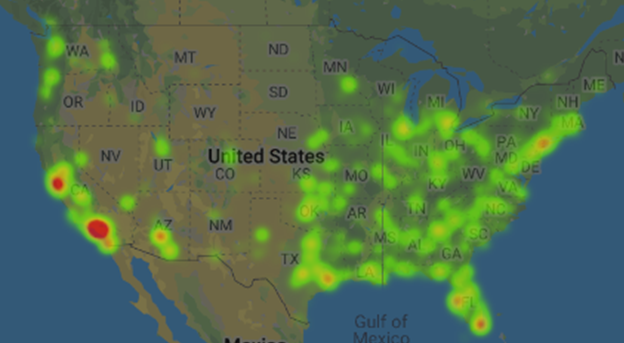 The state of California clearly produces the most major leaguers. This is no surprise due to the prestigious baseball colleges in the area as well as the high schools that allow their players to play baseball year-round. The usual suspects like Florida and eastern Texas are here as well, but there are a few things that surprised me. The first is the number of MLB players that come out of southern Kansas and Oklahoma. The University of Oklahoma, Oklahoma State University, and Wichita State University have done a good job of producing big-league talent over the years. I am also surprised by the dearth of major leaguers found in the Mountain West. This is most likely due to the overall sparseness of the population, but it is still surprising to see such a large gap of overall baseball talent.

There are several conclusions that can be drawn from this study.

All draft data was obtained from Baseball-Reference.com and all WAR figures are via FanGraphs.com.

I’ve done a similar analysis on a smaller scale. I didn’t take nearly as much into account as you did, but one thing I did do differently was to look at what percentage of eventual WAR was drafted by a team rather than total WAR. The thought process being, if only so much WAR is available in a draft, a team could have drafted less volume but still be proportionally successful.
You have all of the data collected here to do that analysis. If I ever get around to doing it on this data set, I’ll try to get it published on here.
Very, very fun analysis though.