April 30, 2019
It feels somewhat disingenuous to focus a second straight post on a member of the Texas Rangers because I have admittedly not spent much time watching them play baseball in recent years, and by recent years I mean my entire 23-year life. With that said, what little I have watched I can mostly attribute to my enjoyment of two of their current players: Rougned Odor and Mike Minor.

Drafted seventh overall in 2009 by the Atlanta Braves, Minor was a starting pitcher for parts of five seasons with the big league club, four of which were unremarkable but one (2013) which was actually quite good. In that 2013 campaign, he logged 204.2 innings, 181 strikeouts, a 3.21 ERA, and a 3.64 xFIP en route to a solid 3.3 fWAR. Soon afterwards, career-threatening shoulder issues emerged and caused him to miss the entirety of 2015 and most of 2016 before the Kansas City Royals signed him to a minor league deal. In 2017, he pitched 77.2 quality innings out of the bullpen at the major league level, quality enough that the Rangers decided to make him a member of their starting rotation in the following season, which some who were unaware of his pre-Kansas City history probably considered a bit puzzling.

The early returns on what was a somewhat risky and potentially costly investment yielded strong results, especially for a man who had not started a major league game in close to four years. He ranked 37th in fWAR among starters with at least 150 innings pitched, which put him in pretty decent company: 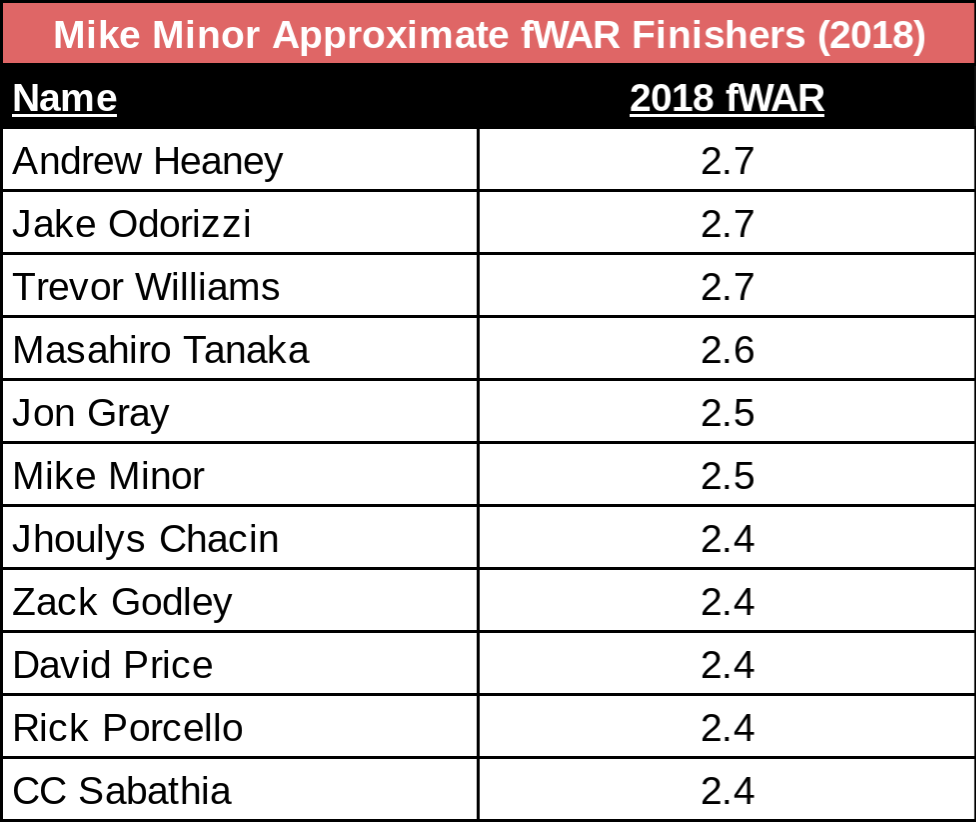 When accounting for the fact that Minor’s career-best 2013 slotted him just four spots higher despite pitching 47.2 more innings, the case can be made that even his micromanaged 2018 workload may have been even more impressive. The risk of the contract has almost evaporated entirely as well. After signing a three-year deal for $28 million, he has already delivered $24 million of value with just a season and change under his belt. A combination of his encouraging 2018 and the Rangers’ relative lack of pitching depth helped the 31-year-old Minor earn the starting nod for 2019’s Opening Day, which, no matter how extreme the dearth of talent may be, is quite meaningful. To be able to say that you had been the ace of a Major League Baseball team when all is said and done (which, barring an injury to a teammate, is usually implied by that honor) puts you in the company of very few people, and it is probably a pretty neat thing to have on a resume.

Unfortunately, when March 28 finally rolled around, he allowed six earned runs to a Chicago Cubs team that would eventually go on to win the game 12-4. Two of those six earned runs came courtesy of a three-run Javier Báez dinger immediately after his departure from the game in the fifth inning, but given that Báez had already tagged him for a solo shot earlier, perhaps a successful start to the season was just not meant to be.

He has taken the mound five times since then, facing every team in the AL West once plus a bout against the Arizona Diamondbacks. In 36 innings, he has racked up 36 strikeouts, allowed 31 baserunners, and permitted just seven earned runs. For those counting at home, that’s a 1.75 ERA and a 0.83 WHIP (shoutout to Mitch Haniger, whose being hit by a pitch does not count against that total). Included in that sample are seven shutout innings against the Astros, who boast the league’s third-most productive offense (as of April 29), the first complete-game shutout of his career, and most recently, a dominant display against the league-best Mariners in which he recorded a career-high 13 strikeouts in seven innings. He had a rough go of it in his April 22 outing against Oakland, but if not for some late-game heroics from noted slugger Jarrod Dyson, it would have been four Rangers wins in five Minor starts. As far as raw results go, it is hard to argue with what Minor has been able to accomplish. Preventing runs is the name of the game, and he has succeeded in doing so across 30 of his last 36 innings, an accomplishment not to be taken lightly in any context.

For that reason, teams around the league (or at least the National League East) have reportedly considering adding him to bolster rotations of their own (and as things currently stand, both the Phillies and the Mets could benefit from his services). Despite a fairly encouraging 13-13 start to the season, FanGraphs still projects the rebuilding Rangers to finish well out of the playoff picture at 75-87. Given that, it will likely be less a question of how much interest Texas has in trading him than what their return will be when they eventually do. The answer to that question depends on the answer to the most important one of all: How good is Mike Minor?

So far this season Minor has had extraordinary success preventing baserunners from scoring, stranding 81.3% of them. In the five post-Opening Day starts, that number rises to 94.5%, and every single baserunner not in an Athletics uniform was left stranded. A six-start sample may not be representative of an entire season, but for now it remains a top-16 mark. For some of the more strikeout-centric pitchers on this list, like Patrick Corbin, Blake Snell, and Justin Verlander, the inevitable regression will likely be less drastic, as not allowing balls to be put in play is generally quite effective at mitigating runs. Unless his recent 13-punchout performance is a sign of things to come, Minor’s 8.63 K/9 does not allow him the luxury of being lumped in with that group. His major league resurgence with the Royals was driven in large part by a career-high 10.2 K/9, but as a starter in the past two seasons that average has dropped about 24% to 7.79. After 34 starts made in that time, his LOB% sits at 74, which is just a single percentage point higher than the current league average.

Batted ball luck has seems to have played a big part in keeping baserunners at bay early this season. Since 2018 Minor has allowed a BABIP of .249, and this season that number has fallen to .204 (as of April 28, the league average is .291). With runners on it is just a couple of ticks higher at .206. Where exactly the luck is picking its spots becomes evident when comparing the quality of contact players are making overall versus when runners are on base, because Minor is actually allowing better contact with runners on than he is overall:

Harder contact generally correlates with increased offensive production, so even though the differences highlighted here are relatively small, they do mark a departure from expectation. At first glance, it appears that luck has done its fair share of heavy lifting in this limited sample. But as is often the case, that first glance may also be a bit misleading. Here is more data from that same sample which focuses instead on the path the ball takes once it leaves the bat:

The 8.3 point increase in ground-ball percentage provides at least a partial basis for Minor’s run-stopping prowess. A batter can hit the ball right on the money and have it go down as a “hard hit” ball, but if the ball shoots straight down into the dirt, its shot at any further glory likely dies as an infielder slings it over to first base. Take Ian Desmond of the Colorado Rockies for instance. In 2018, Desmond hit the ball hard 34.1% of the time, just 1.2 points below the league average. However, his 62% ground-ball rate, anchored by a launch angle of precisely 0 degrees (the league’s second-lowest among players with at least 200 batted ball events), drove his wRC+ down to 81, meaning his body of batting work was 19% worse than league average.

That is all to demonstrate that ground balls are generally worse for offense and that they put a lot of hard hit balls to waste. Minor’s ability to induce more ground balls in tough spots has almost certainly contributed to his bump in success. It is no coincidence that in his four starts with perfect left on base percentages, he was the beneficiary of five ground ball-based double plays, which are among the game’s best momentum blockers.

In the weeks and months to come, Minor’s success or lack thereof in this department could very well shape the course of not just this season, but the next few of his career. The great players of Major League Baseball demand so much of our attention that sometimes, whether we know it or not, we overlook the good. Minor may never make an All-Star team or make a legitimate run at a Cy Young Award (though his current 0.9 WAR will keep him in both conversations for now), but as long as he can continue to occasionally throw a shutout here and dominate the Astros there, he’ll deserve a spot in a starting rotation. It is hard not to root for a player whose career was almost forced to a premature close. Only time will tell if his future will be spent in Texas, on the East Coast or with another team in need, but no matter where he plays and how long he continues to do so, he can always say that for at least a time, he was an ace.

An older version of this article appears under the same title at Mike’s blog, “Words by Delayo.”

Mike is a contributor to The Hardball Times, FanGraphs Community Research, and SB Nation's The Bird Writes.