Among the flurry of deals announced over the past month and a half, a couple raised eyebrows:

The logic behind these signings made sense superficially: The A’s signed Butler, who was the Royals’ DH in 2014, because Oakland DHs hit a middle-infielder-esque .215/.294/.343 last year. The Royals signed Morales to take Butler’s place. What was a little more surprising was the money: three years for $30 million for Butler, two years for $15.5 million plus an $11 million mutual option/$1.5 million buyout in 2017 for Morales.

The reason that’s surprising is that both were below-average hitters in 2014. Butler had a wRC+ of 79 as a DH, while Morales’s was 62. Among the eleven players with at least 200 plate appearances at DH last season, Morales’s wRC+ ranked eleventh and Butler’s ninth.

That’s the thing about designated hitters: They play the ultimate You had one job… position. All they’re supposed to do is hit. There will never be a Derek-versus-Ozzie, bat-versus-glove debate about DHs. They’re all bat. And while wRC+ doesn’t encompass baserunning contributions, DHs are generally plodders like Butler, who went from first to third on a single only once in 31 opportunities last year, so that doesn’t differentiate them. (There have been only 12 seasons in which a player’s gotten more than 15 stolen bases as a DH, and five of those were by one guy, Paul Molitor.)

Designated hitters are paid to hit, not to field and run. So why do DHs who are below-average hitters stay on rosters, much less sign multi-year free agent contracts? Before I try to answer that, here’s another tidbit about designated hitters. This is a list of the number of American League players, by position, who qualified for the batting championship last year (i.e., 502 plate appearances):

Yikes. That makes it look even worse. There were fewer regular designated hitters than there were regulars at any other position. Has this always been the case: unremarkable hitters who aren’t even regulars?

To answer this question, the chart below shows, for every season since the advent of the DH in 1973, the percentage of teams with a DH with 502 plate appearances, the percentage with a DH with 400 plate appearances, and the aggregate OPS+ for all DHs. (I chose the percentage of teams, rather than the the number of DHs, to account for the increase in American League teams from 12 in 1973 to 14 in 1976 and 15 in 2013. And I used OPS+ because that’s the only relative  metric I could find with splits data going all the back to 1973.) 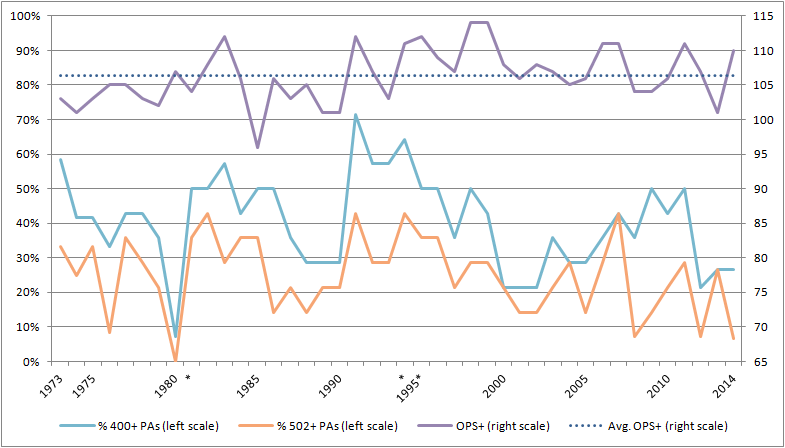 As you can see, there were roughly three eras for DHs:

This began to shift with Hal McRae, whom the Royals acquired via a trade with the Reds at the end of the 1972 season, when he was 27. He started 134 games at DH in 1973-75, and was a full-time DH for the remainder of his career. He received MVP votes in four seasons. In 1978, 29-year-old Angel Don Baylor finished seventh in the MVP vote, primarily as a DH (102 starts at DH, 56 in the field) and he won the MVP the next year starting 97 games in the outfield and 65 at DH. There were still plenty of old DHs by the late 1970s — Horton was 36 in 1979 when he became one of only two DHs in history to play 162 games at the position — but it wasn’t the exclusive province of old guys.

Still, there were variations in play. The year 1980 is the only non-strike-shortened season in which no DH qualified for the batting title, and that was largely because of a changing of the guard: Carty retired, Lee May and Mitchell Page neared the end of their careers, Horton played his last season, and Rusty Staub inexplicably got 40% of his plate appearances as a 1B/OF.

(I know what you’re thinking: Hmm, 1994 to 2007: PEDs. Yes, but the statistics I’ve used throughout this analysis — wRC+ and OPS+ — are relative figures. The league average, every year, is 100. When DHs compiled a 114 OPS+ in 1998-99, it meant they were 14% better than the inflated averages of the time, a level never attained before or since. So unless there’s some reason DHs were more chemically enhanced, or benefited more from such enhancement, than other players, it’s not a PED thing. And no, it’s not because of the alleged career-prolonging properties of PEDs, as only five of the 21 seasons of OPS+ over 124 cited above were amassed by players older than 35. Nine of the player-seasons were compiled by hitters in their 20s, and five occurred in 2006 and 2007, after the implementation of MLB’s drug policy.)

So what’s happening now, and how might it inform the Butler and Morales contracts? I think that the decline in DH performance relative to the league and the decline of full-time DHs are related, because they both stem from the construction of pitching staffs in general, and the modern bullpen in particular. In 1973, the first year of the DH, teams commonly carried 10-11 pitchers on their 25-man rosters. Now they usually have 12, sometimes as many as 13. That leaves less room for a full-time player who can’t play in the field and more need for positional flexibility. As Dave Cameron wrote nearly five years ago:

Teams are choosing to increase their flexibility, even if it comes at the expense of some production. Increasingly, teams want the option to use the DH spot as a pseudo off day for their regulars, or as a fall back plan if their banged-up position player is unable to acceptably field his position. With the move towards 12 man pitching staffs, limited bench sizes put a premium on roster flexibility, and teams are reacting by devaluing players who can’t play the field.

In 2014, eight players played at least 15 games at DH (the extreme right side of the defensive spectrum) and 15 games at catcher, second base, or shortstop (the extreme left side). Breaking that combination down by the eras I defined above, it works out to:

Positional flexibility allows teams to get maximum utility from scarce roster spots, but it doesn’t boost batting by DHs. The eight players in 2014 who played at least 15 games at second, short, or catcher as well as DH were J.P. Arencibia (64 wRC+), Alberto Callaspo (68 wRC+), Logan Forsythe (80 wRC+), John Jaso (121 wRC+), Derek Jeter (73 wRC+), Josmil Pinto (101 wRC+), Dioner Navarro (98 wRC+), and Sean Rodriguez (99 wRC+): One good hitter, three average hitters, and four lousy ones. That doesn’t help the aggregate numbers for designated hitters. Add to that the “DH Penalty,” i.e. the observation that hitters tend to perform worse at DH than when playing in the field — which Mitchel Lichtman calculates in this article to be about 14 points in wOBA — and we can expect increased positional flexibility to erode the offensive contributions of designated hitters.* Jaso, an extreme example, hit .298/.362/.488 in 50 games as a catcher but only .208/.293/.296 in 35 games as a DH.

The DH will remain an offensive position, obviously. And there are obvious risks in drawing conclusions based on just the past seven seasons of data, which admittedly include three above-average years for DHs in aggregate. But given modern roster construction, it’s hard to see DHs consistently generating an outsized contribution to offense as they did in years past. That doesn’t make the below-average performance of Butler and Morales tolerable, but it does make it less of an outlier than it would’ve been previously.

*Lichtman’s data indicate that position players who sometimes were DHs didn’t suffer a greater DH penalty than players like Ortiz or Butler, who rarely play in the field. But as he stated in the above-cited article,

I expected that the penalty would be greater for position players who occasionally DH’d rather than DH’s who occasionally played in the field. That turned out not to be the case, but given the relatively small sample sizes, the true values could very well be different.

Guest
Jon L.
You can flag a comment by clicking its flag icon. Website admin will know that you reported it. Admins may or may not choose to remove the comment or block the author. And please don't worry, your report will be anonymous.

Excellent article. I will disagree on one point, and say that I think it was clearly a PED thing. Players were able to build strength and muscle mass to enhance hitting prowess, and were willing to take the hit on baserunning and agility that comes with toting more weight around. And why not? The money’s in hitting. PEDs were more appealing to players with some initial level of slugging ability, and disproportionately benefited DH-type skills.

Jon, here’s the response to your smart observation: Thanks for it! http://www.fangraphs.com/community/the-contours-of-the-steroid-era/

Hey Jon, thanks for the comment. You know, I was wondering, when I wrote that paragraph about PEDs, whether I should just leave it out – I’m SO tired of that topic. But you raise a good point. I’ll do some work on it over the next couple days (I’m on a train w/o WiFi right now) and will let you know.