Power and Patience (Part V of a Study)

Here is an interesting tidbit to start: only two batting title qualifiers have ever had a higher ISO than OBP in a season. One was Barry Bonds in his insane, 73-HR 2001 season (.536 ISO, .515 OBP–I told you it was insane). The other was Matt Williams in 1994. Take a look at the 1994 OBP and ISO scatter chart among qualifiers, with a line of y=x for reference: 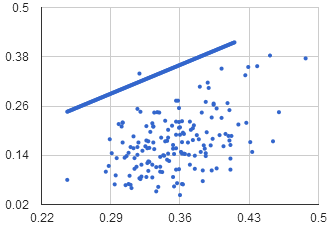 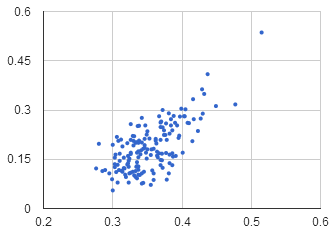 (I kind of wanted just to show that chart.)

That only two players ever had a single season, let alone career, with a higher ISO than OBP, a good way to measure a player’s relative prowess at each facet of hitting is to look at the gap between those statistics.

Care to guess the player with a career OBP below the historical average of .333 who has the smallest gap between his career OBP and ISO? To the surprise of nobody, it’s:

Expand this list, by the way, and it feels like a pretty accurate indicator of players who provided solid and at times even great power, but weren’t great offensive players. The top 10: Kingman, Steve Balboni, Ron Kittle, Branyan, Tony Armas, Alfonso Soriano, Dick Stuart, Matt Williams, Tony Batista and Mark Reynolds. The debuts of those players range from 1958 (Stuart) to 2007 (Reynolds), so this phenomenon is not exactly a 21st century one. It does, however, divide pretty well along pre- and post-expansion lines.

Among players who debuted before Stuart, the next smallest gap here belongs to a Hall of Famer: Ernie Banks, with a .330 OBP and .226 ISO. He’s 18th on the list, so that’s about where the last paragraph’s thesis breaks down. During his career, 1953-71, the league-wide non-pitcher OBP was .329, so Banks was about average reaching base, but provided a ton of value from his years at shortstop and his power (1953-71 ISO: .135).

Wally Post is 19th, and he debuted in 1949, making him the top pre-1950 debut player on the OBP minus ISO list, and the smallest gap belonging to someone who debuted before 1940 belongs to DiMaggio, who debuted in 1937. He ended up with a .324 OBP and .164 ISO in his 10 seasons with the Bees, Reds, Pirates and Giants. We’re talking, of course, about Vince DiMaggio, not Dom.

Hobe Ferris played from 1901-09 and never led the league in home runs, but was in the top 7 five times in a nine-year career on his way to 40 career home runs. His .102 career ISO came in a time frame when league-wide non-pitcher ISO was .077, but he only produced a career .265 OBP (vs. the league’s .310). A second- and third-baseman with a good defensive reputation (backed up today by his +70 career fielding runs on Baseball Reference), he also may have been the first power threat in MLB history who didn’t reach base effectively. His best season was actually during the nadir of the dead ball era, his penultimate year in 1908 when he hit .270/.291/.353 for a 109 wRC+. This was mostly due to an unusually efficient year reaching base, but even his .083 ISO was better than the league’s .069.

All-time, however, Ferris’s OBP-ISO gap ranks as just the 166th smallest out of 692 who meet the 3000 PA, sub-.333 thresholds. The 167th smallest belongs to another turn-of-the-century player, the infamous Bill Bergen, who was just bad at everything. In general, you’re just not going to find turn of the century players whose ISO’s are particularly close to their OBP’s, because ISO’s were so low 100 years ago.

To start getting into the other types of players–good OBP, not so good power–let’s remove any cap on the OBP and see what happens at both ends of the list of OBP and ISO gaps. Again, 3000 PA is the cutoff.

So, apparently Mark McGwire’s .263 career batting average is a little misleading…as in, perhaps the most misleading batting average of all time. He posted a .394 OBP and .325 ISO. The other three players who weren’t on this list when sub-.333 OBP’s were removed are Gonzalez, Sosa, and Howard. None of them have spotless resumes, but they are bound to be the 2nd to 4th best hitters on that list in most any ranking of these players, subjective or objective. After Howard, the next few players on this list who had an OBP above .333: Richie Sexson (15th), Albert Belle (20th), Jose Canseco (25th), Andruw Jones (28th) and Greg Vaughn (30th). All probably better hitters than Kingman and certainly better hitters than Balboni.

We might think that everybody with a large gap is from the dead ball era, but such is not the case. Richie Ashburn (1948-62) and Luke Appling (1930-50) carved out Hall of Fame careers. They got away with a lack of power by hitting .300 in their careers. These next two players weren’t career .300 hitters, providing value more so with high walk rates, and how can we talk about players who got on base but didn’t hit for power without them:

Just as the first list in this piece lacked many dead-ball era players, this list of large OBP-ISO gaps seems to lack 21st (and late 20th) century players. The first player to debut after 1980 that we meet on the list, in the 13th place?

Two spots below Magadan is one of the three who started us down this month-plus-long path:

There are plenty more angles, more than I can cover, that one could take with this. At this link you can find the list of players with 3000 PA since 1901, ordered from the largest OBP-ISO to the smallest, with extra stats (as I didn’t change or remove the default dashboard stats).

hscer (pronounced h-s-seer) is also the Curator of MLB quizzes at Sporcle.com. You can join Dan Szymborski in following hscer on Twitter.