Frankie Montas has seemingly been around forever, first signing at age 16 with the Boston Red Sox in 2009. He was then traded, going from Red Sox to White Sox, along with Cleuluis Rondon and Jeffrey Wendelken as part of the Jake Peavy trade in 2012, which seems like an eternity ago. He quickly emerged as one of the top pitching prospects in the White Sox system and was promoted directly from Double-A to throw 15 innings in the majors in 2015, with his final two appearances being as a starter. Those would be his only two starts for the White Sox however, because Montas was then traded to the Dodgers in a three-team deal that most notably sent Todd Frazier to the White Sox and Jose Peraza to the Reds.

Once again, Montas barely pitched in the Dodgers organization as he underwent rib resection surgery, forcing him to miss four months of the season. Shortly after his surgery and returning to the field, Montas broke his rib, costing him nearly the rest of the 2016 campaign. Before the season ended, Montas was on the move again, this time to Oakland along with Grant Holmes and Jharel Cotton as part of the trade that sent Josh Reddick and Rich Hill to the Dodgers.

In 2017, Montas got to start his season in the majors with Oakland, but oh boy did he struggle. In 32 relief innings, Montas posted a 7.03 ERA and 7.13 FIP, partially due to a terrible 1.8 K:BB ratio and a inflated 26.3% HR/FB rate, forcing him back down to Triple-A Nashville. Despite concerns that Montas’s lack of a quality secondary pitch and questionable control might limit him to a high-leverage relief role, the A’s decided to stretch Montas out as a starter. Montas would join the rotation in late May 2018 until late July, when he posted a respectable 3.88 ERA with a matching FIP despite an underwhelming K-rate of 15.2%.

Montas showed enough to gain a slot in the 2019 rotation, and he has taken off so far. This season, Montas has produced a 2.81 ERA, a 2.88 FIP, and a solid 3.67 K:BB ratio, producing 2.0 fWAR in 64 IP. By fWAR, Montas has been the 9th-most valuable starter in the majors in 2019. Has Montas truly emerged as a legit front-line starter? If so, how has he taken this leap forward?

Montas has always been essentially a two-pitch pitcher, throwing his sinker and slider 80% of the time with his four-seamers making up the majority of the remaining 20%. Leaning on fastballs is not a bad thing when a pitcher throws as hard as Montas, with his four-seamer and sinker averaging roughly 96.9mph (95th percentile) in his 60 IP in 2018. However, hitters teed off on his elite velocity sinker with an average .397 wOBA. Lefties were not fooled by it as they posted a .447 wOBA vs. the offering. The four-seamer had better results with a .273 wOBA against. Montas’s true weapon was his slider, which generated an elite 36.8 Whiff% and limited hitters to just a .247 wOBA against. Impressively, the slider was even more effective against lefties than righties, limiting them to just a .185 wOBA in 2018, but it only generated 20% whiffs. Montas lacked a true put-away pitch against lefties, resulting in just a 12.7% K-rate versus LHH.

Montas has gone into 2019 resolving this issue by adding a splitter to his arsenal. Here is a look at Montas’s pitch mix:

While Montas threw a few token changeups (2.9%) in 2018, he has fully embraced the splitter this year, adding it as a true secondary offering along with his slider. He is throwing the splitter 23.6% of the time against lefties, giving him an additional weapon in facing opposite-handed hitters, and the results have been there. Here is Montas’s numbers versus lefties in 2018 compared to 2019.

The splitter is clearly working for Montas, resulting in excellent results vs. lefties. The splitter is working so well in fact that Montas has actually developed a reverse platoon split in a sense, as his K-BB% vs righties is only 14.6%, nearly 10 percentage points less than his results against lefties. As you expect with a splitter, the positive results are due to hitters chasing the balls below the zone. Hitters are chasing pitches 32.6% of the time this season compared to just 24.7% of the time in 2018. Here is a plot comparing whiffs in 2018 vs 2019: 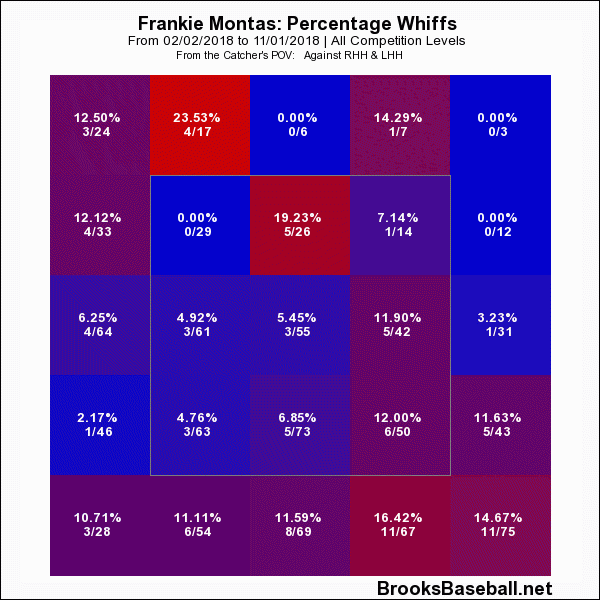 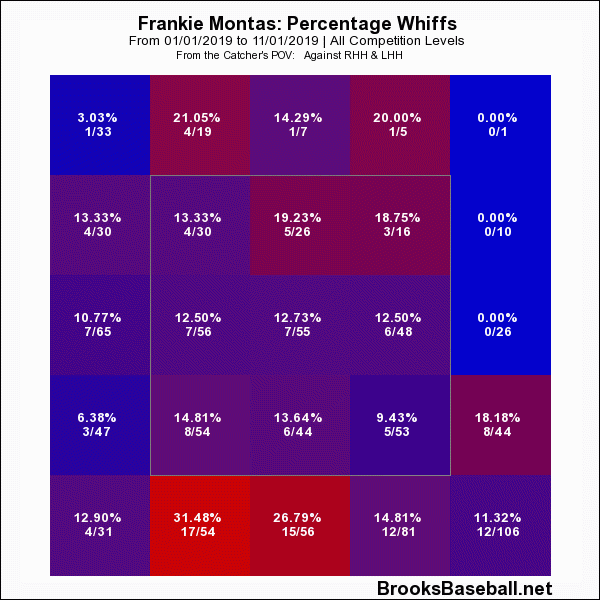 Clearly Montas is succeeding in generating a huge amount of whiffs down and away from lefties with the splitter. Here is an example of 11 whiffs via the splitter and an overlay of Montas fastball/splitter from @PitchingNinja.

In addition to the splitter, Montas continues to use the slider as an effective weapon, throwing it 30% of the time vs RHH and 21% of the time to LHH. He mainly throws it down and away to righties as a strikeout pitch. He is throwing it harder at 88.4 mph this season compared to 86.3 mph last season. The pitch is also moving more, having 58% more horizontal movement than average versus just 2% more than average in 2018. Batters have only hit for just a .222 wOBA against the slider while whiffing 32.7% of the time against it. 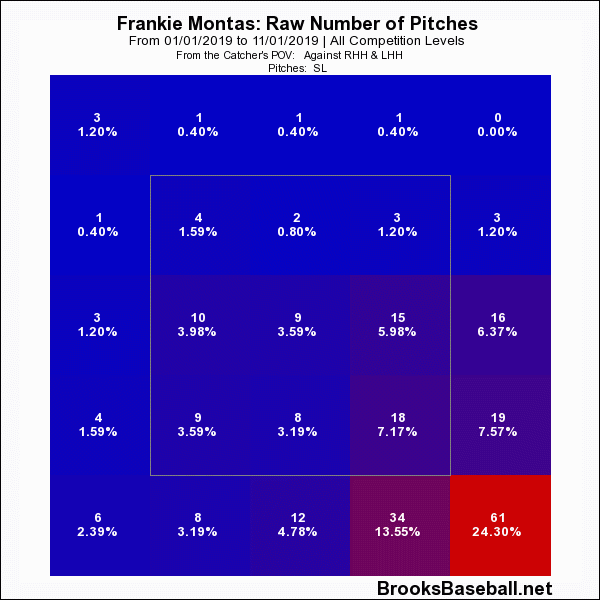 When hitters do manage to make contact again Montas, the quality of contact is weak. Montas has generated a 52.1% ground-ball rate, nearly 10% higher than in 2018. Once again, the splitter is partially to thank for the drastic increase in grounders, as it generates ground balls at a 63.6% clip. The slider has also taken a step forward, resulting in 62.5% grounders when put in play. 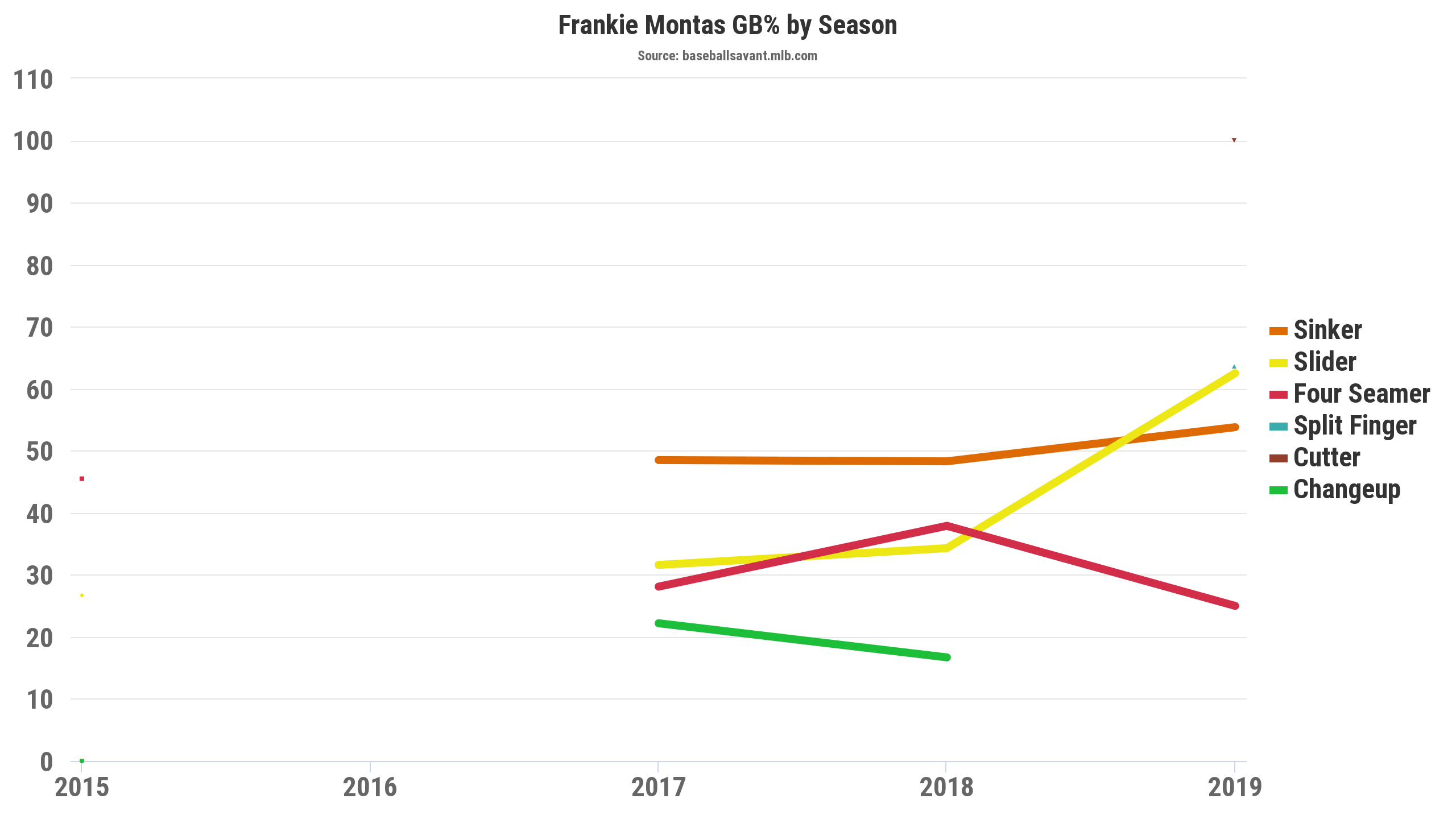 The increase in grounders helps explain why the 26-year-old leads the league (minimum 100 BBE) in Barrels/PA with a 2% mark, having allowed just five in 170 batted balls. Montas has also been helped by cutting his walk rate from 7.4% to 5.3%. Although Montas is actually throwing the ball in the strike zone less than in 2018 (splitters thrive outside the zone), his increased ability to generate swings-and-misses allow him to get ahead in the count instead of nibbling on the edges of the zone. Because of these factors, Montas’s .283 wOBA allowed is right in line with his xOBA of .286, which is in the 73rd percentile among all pitchers compared to last season where he was in the 7th percentile.

Overall, Montas is well on his way to becoming one of the top starters in the league thanks to the new splitter, giving his arsenal two excellent secondary pitches to go along with a fastball that can touch 100 mph. His strikeouts are up. His walks are down. He is generating more grounders. He has effective weapons versus righties and lefties. There is not much more you can ask for a starting pitcher to do. While Montas will likely not be a top-10 pitcher going forward, he has quietly become a potential No. 2 starter for Oakland.

Spends way too much time looking at Pitch F/X data as well thinking about Baseball and philosophy. Based out of Boston,MA.

Member
rustydude
You can flag a comment by clicking its flag icon. Website admin will know that you reported it. Admins may or may not choose to remove the comment or block the author. And please don't worry, your report will be anonymous.

Thank you for this analysis. He does seem like a rising star.